On December 23rd, 1937 a U.S. Patent was filed for a collapsible bicycle. The patent had six unique features to make it fold into a small space for easy storage and transport. The Patent was awarded on August 13th, 1940. This is the story of this bike. 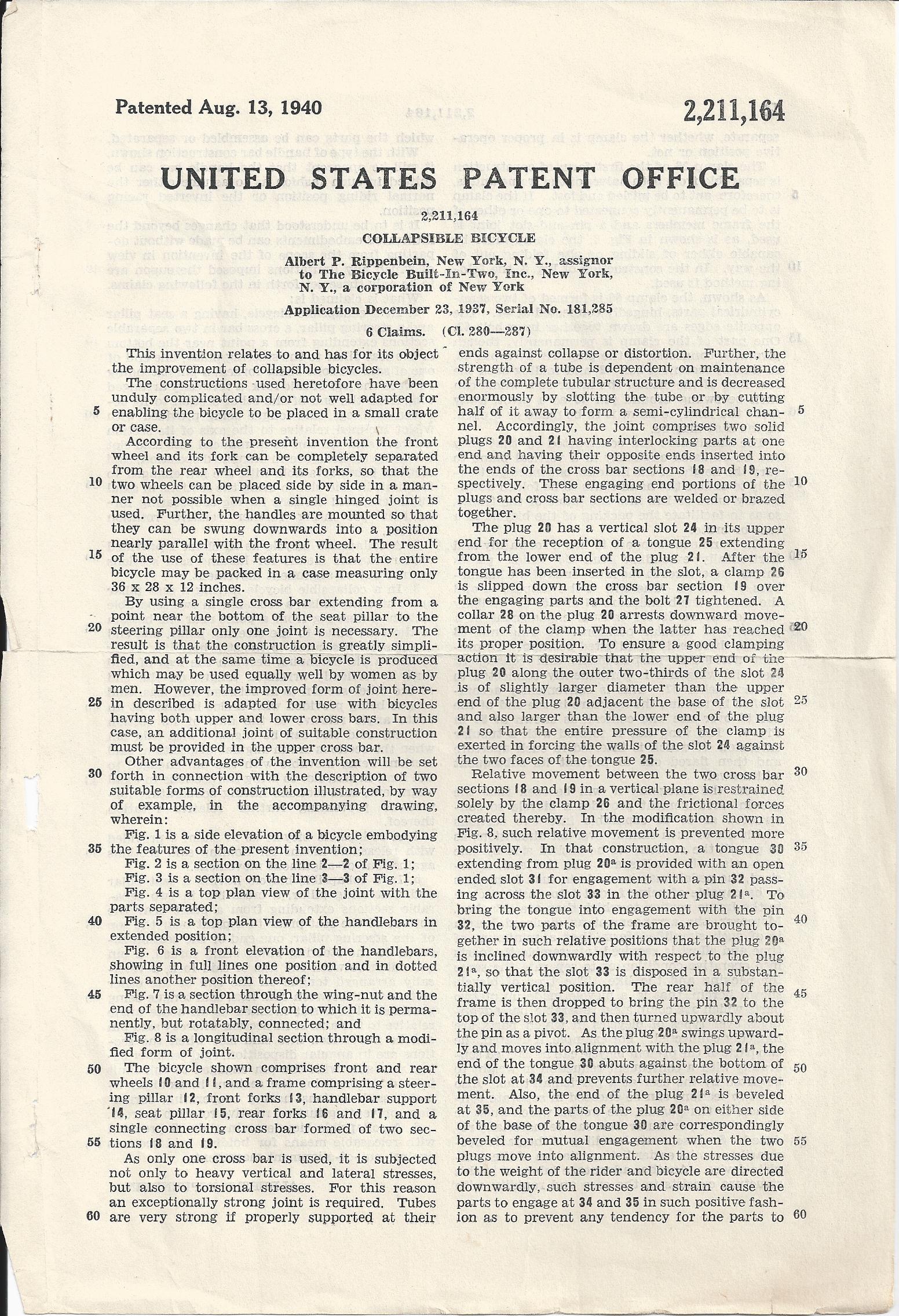 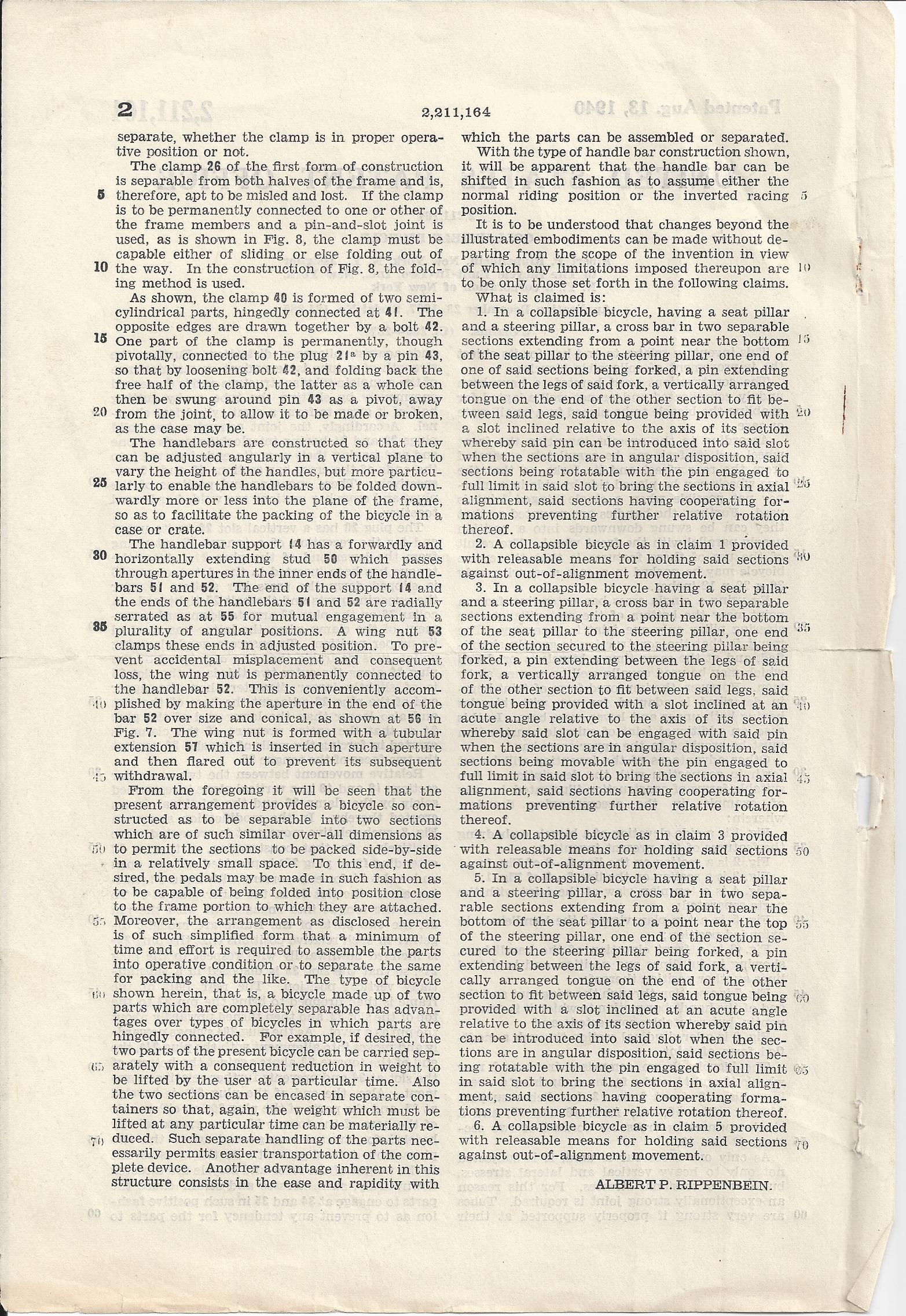 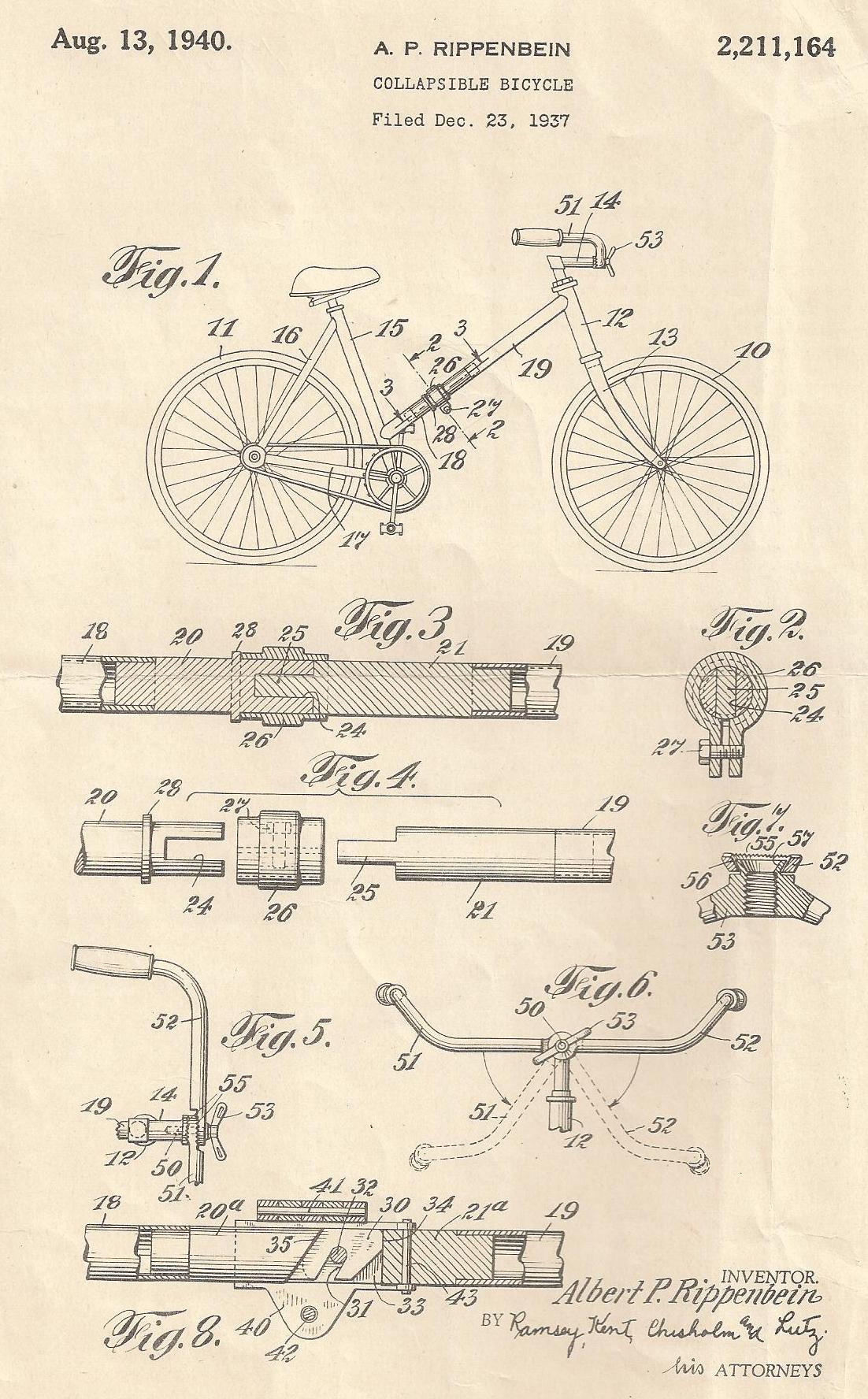 In 1938 the Compax Mfg Co. Inc. introduced it’s Compax Vagabond Folding bike. This bike was designed for easy transport and was targeted to apartment dwellers, yachtsmen and vacationers along with daily commuters.  It did not take long for Westfield Mfg Co., the makers of Columbia bikes to take note of this bike and they wanted it in their line of bikes. The very next year Westfield purchased the company and patent for this bike. In 1940 the first Westfield made Compax bikes went into production now called the Compax Sports Traveler. 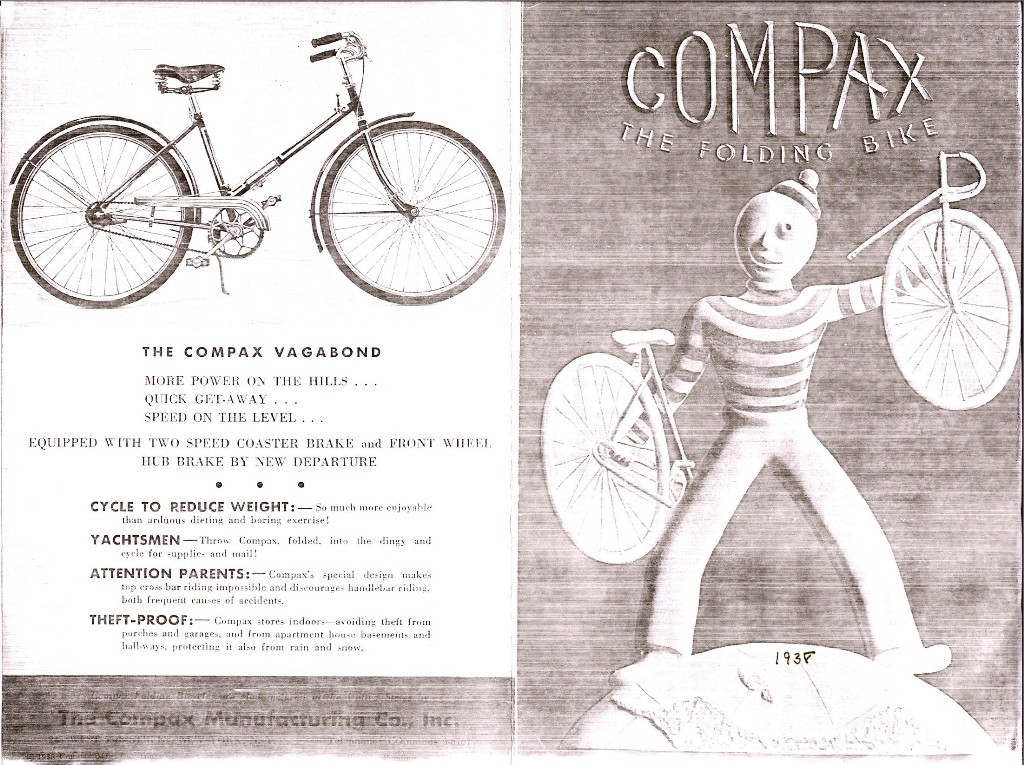 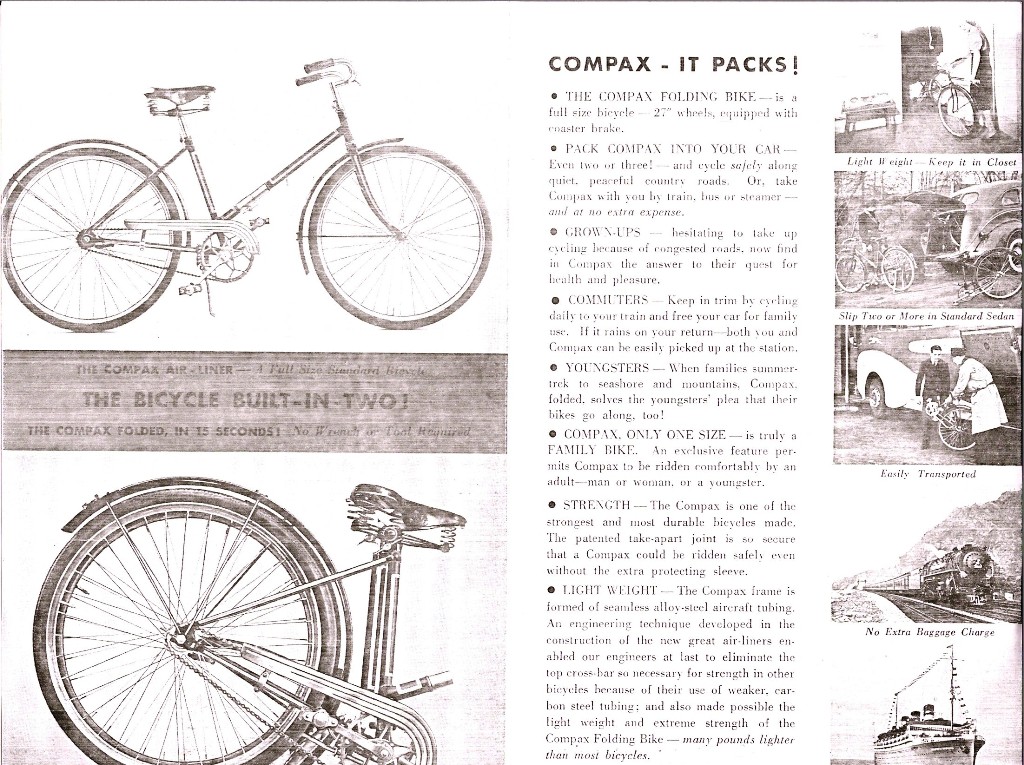 The 1940 and 1941 Westfield Compax bikes differed slightly from the Compax Company’s bike but kept all of the important design features that made this bicycle unique, folding handlebars and a take-apart frame. 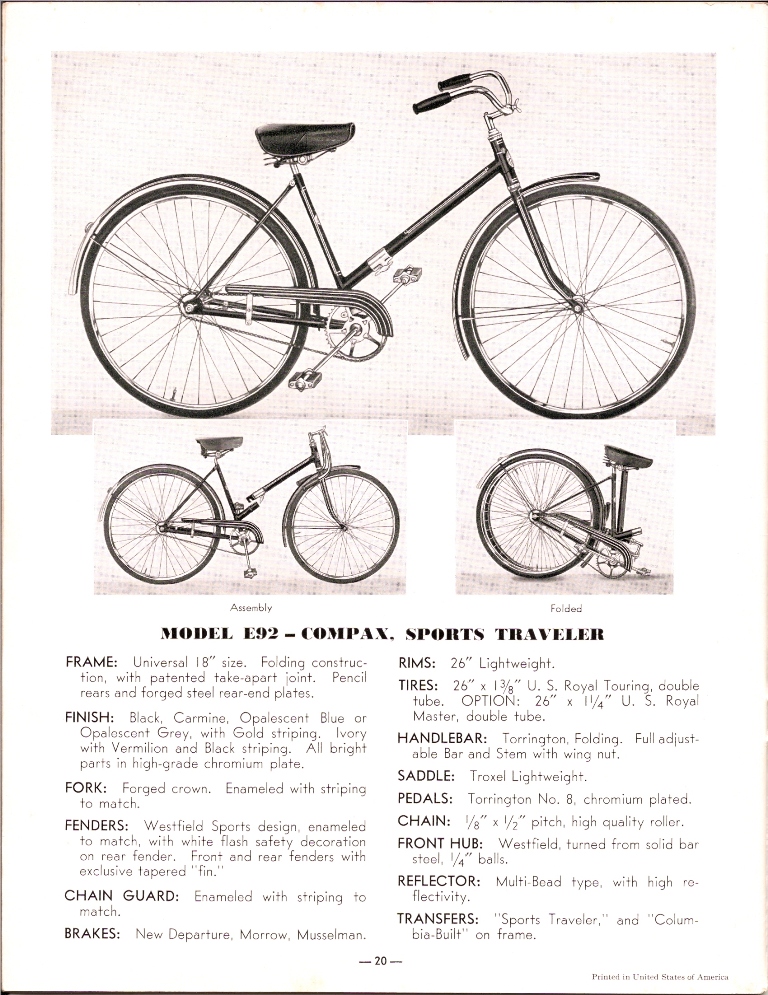 This is a 1942 COMPAX SPORTS TRAVELER that I own. It has serial number G29121 which makes it an early 1942 manufactured bike. Rationing and restrictions limited bicycle production by 1942 but leftover parts from the previous year were used to make bikes for the civilian market. It is the same as the 1941 model. 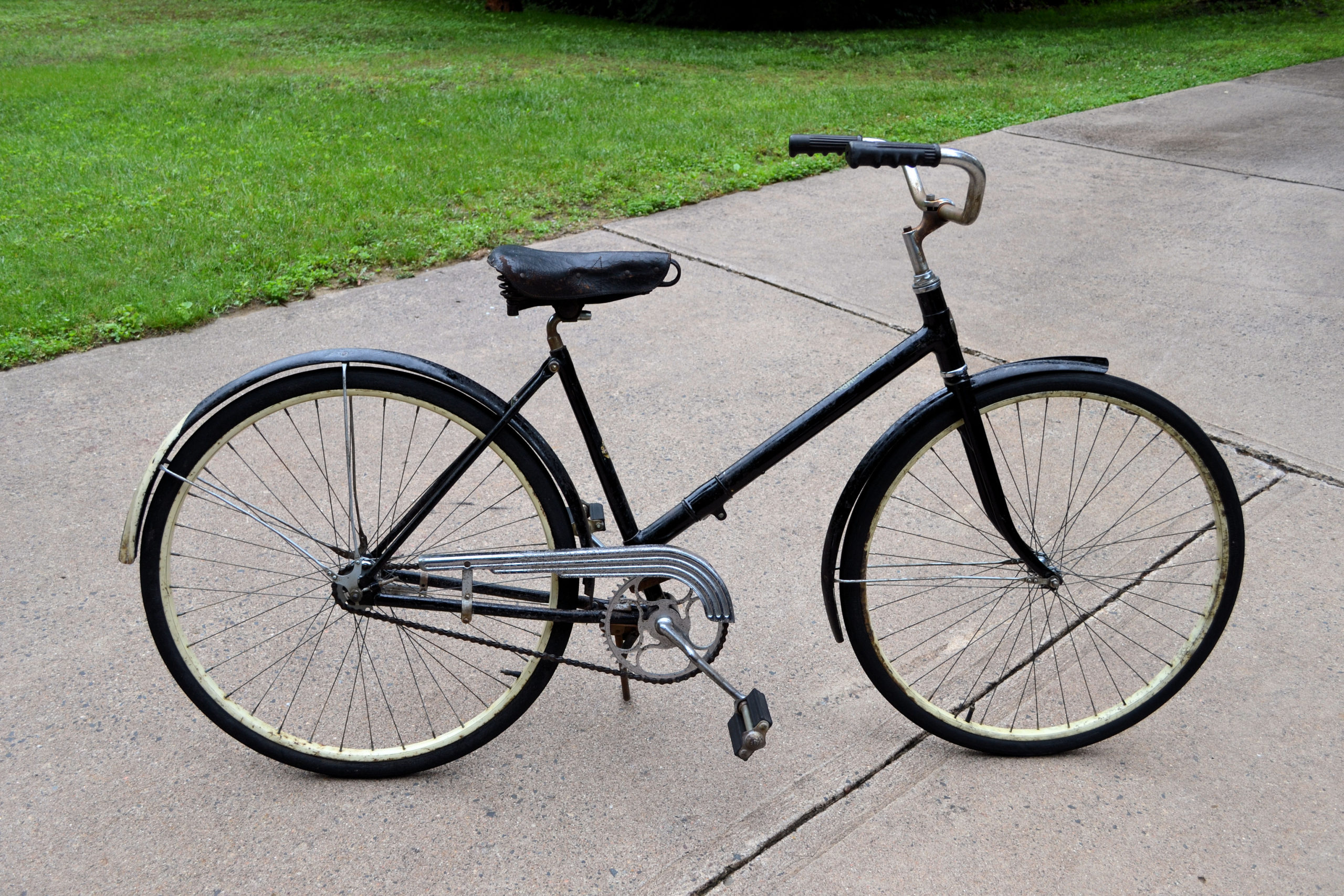 There are significant differences between these “pre-war” style Compax frames and both the Military Style frame and the “post-war” style shown further down this page.
The first of differences are that these pre-war frames had a lug construction at both the seat mast and the head tube. 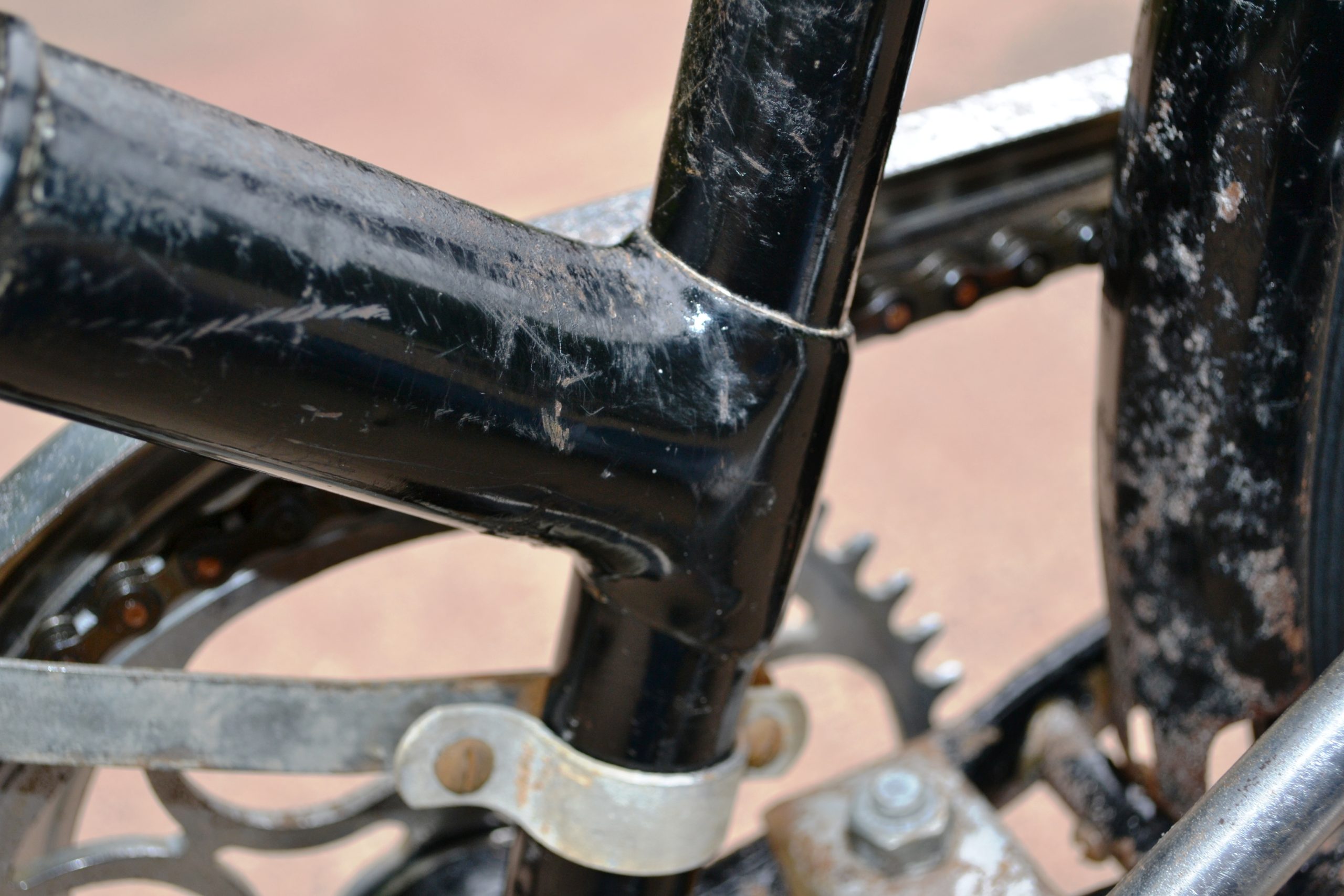 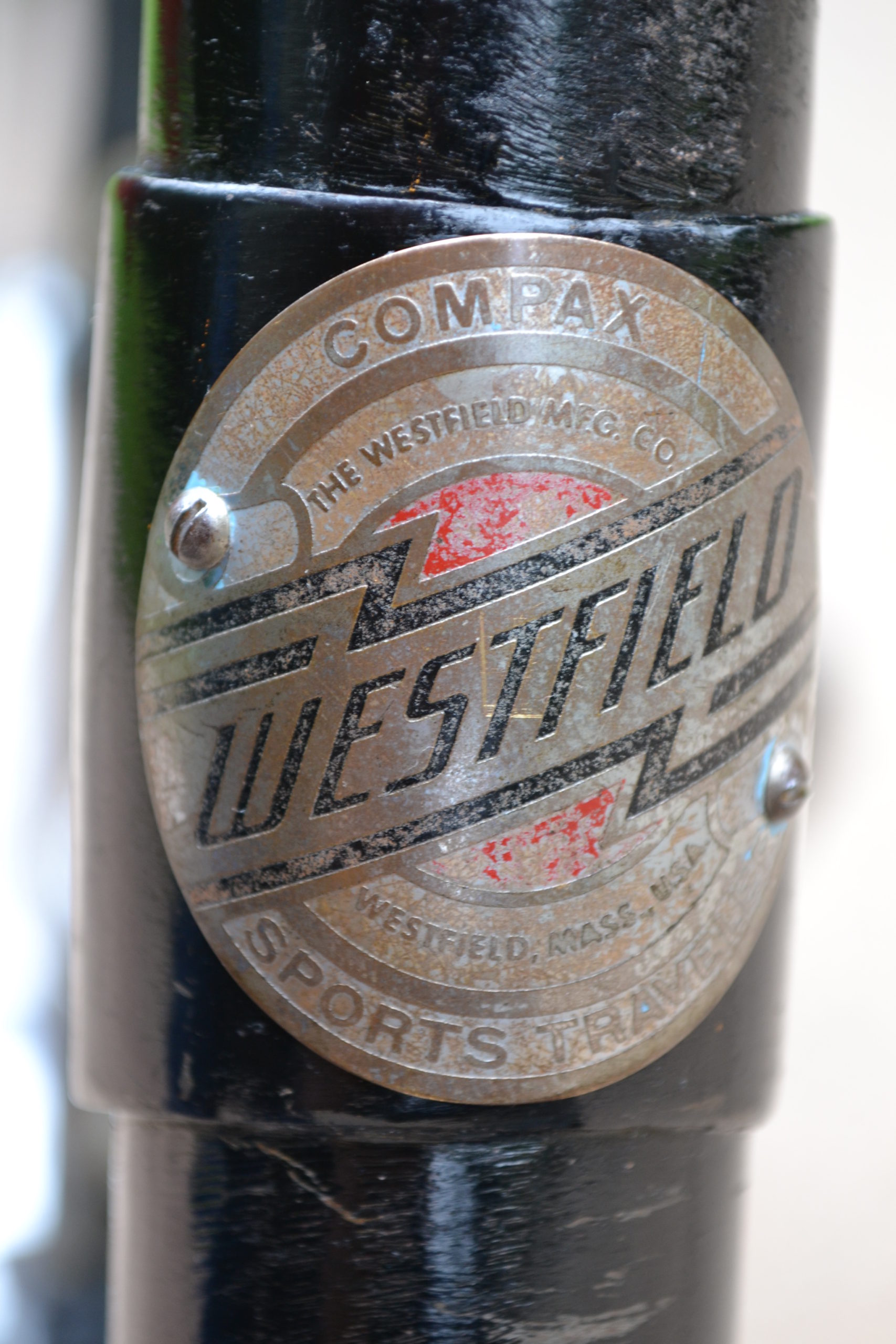 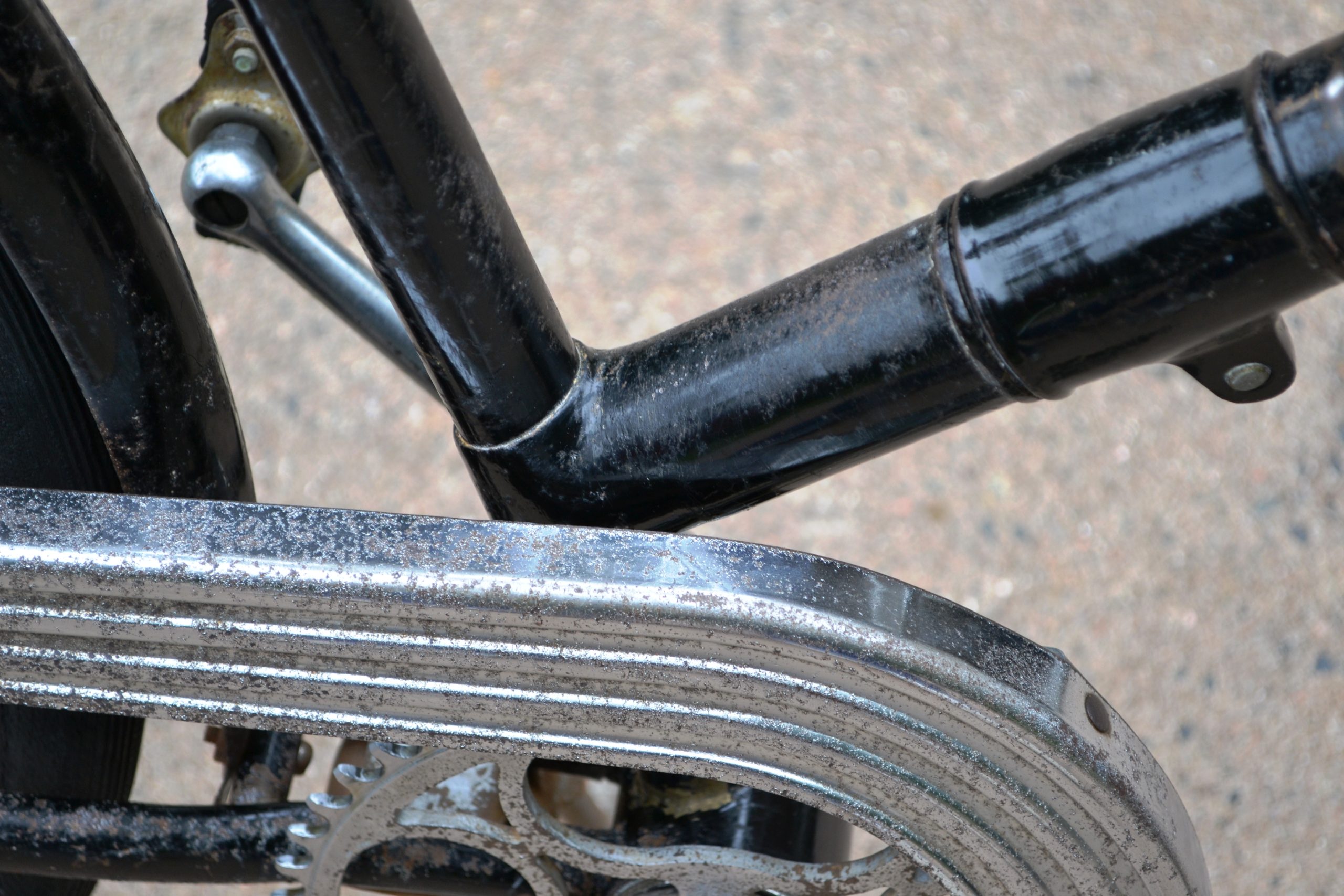 Vacationers were not the only target Westfield Mfg had in mind for this bike. For several years war was brewing with Japan and the idea of a lightweight compact bike was being entertained by the US Military.  Almost two Years before the Japanese attack on Pearl Harbor the US Marines were experimenting with take-apart bikes and used a Westfield made Compax in Marine Paratrooper trials. These tests would lead to the Paratrooper name and legend. The fact of the matter is the U.S. Military never approved these bikes for paratrooper use. This did not mean the makers of Columbia bicycles did not give up on the idea of selling these bikes to the military. Many were purchased by the military for use on bases.

The following is the pre-war publicity picture depicting the marine paratrooper trials. This picture was used by Westfield Mfg during and after the war in ads to promote their participation in the war effort. 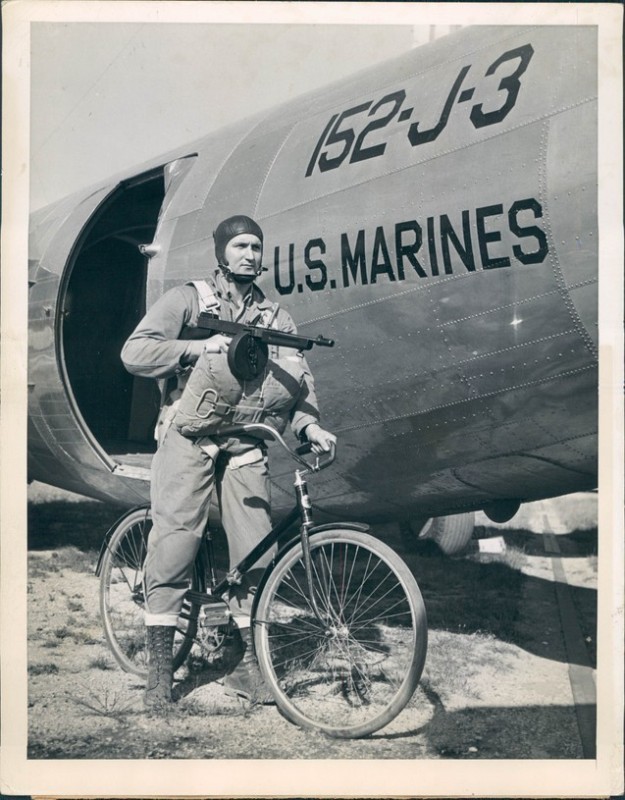 The following advertisement is one used during the war using the picture previously shown.  Though a contract for true “Paratrooper” bikes was never a reality for Westfield Mfg. it did not stop them from playing up the interest the Marine Paratroopers had shown in the Compax a few years earlier including a bit of truth stretching. This is part of the reason many today still think our troupes did jump out of the skies with bicycles strapped to their backs.

Parachuting from the skies

in 1943   Westfield Mfg produced two model Compax’s specifically for sale to the Military. Though there were no known U.S. contracts for these many were sold to individual military bases. These models had an extra frame brace between the seat mast and rear lower rear fork. They are usually found in civilian colors with wartime “blackout” parts. There is no doubt that many were sold to civilian’s but several came from military bases. 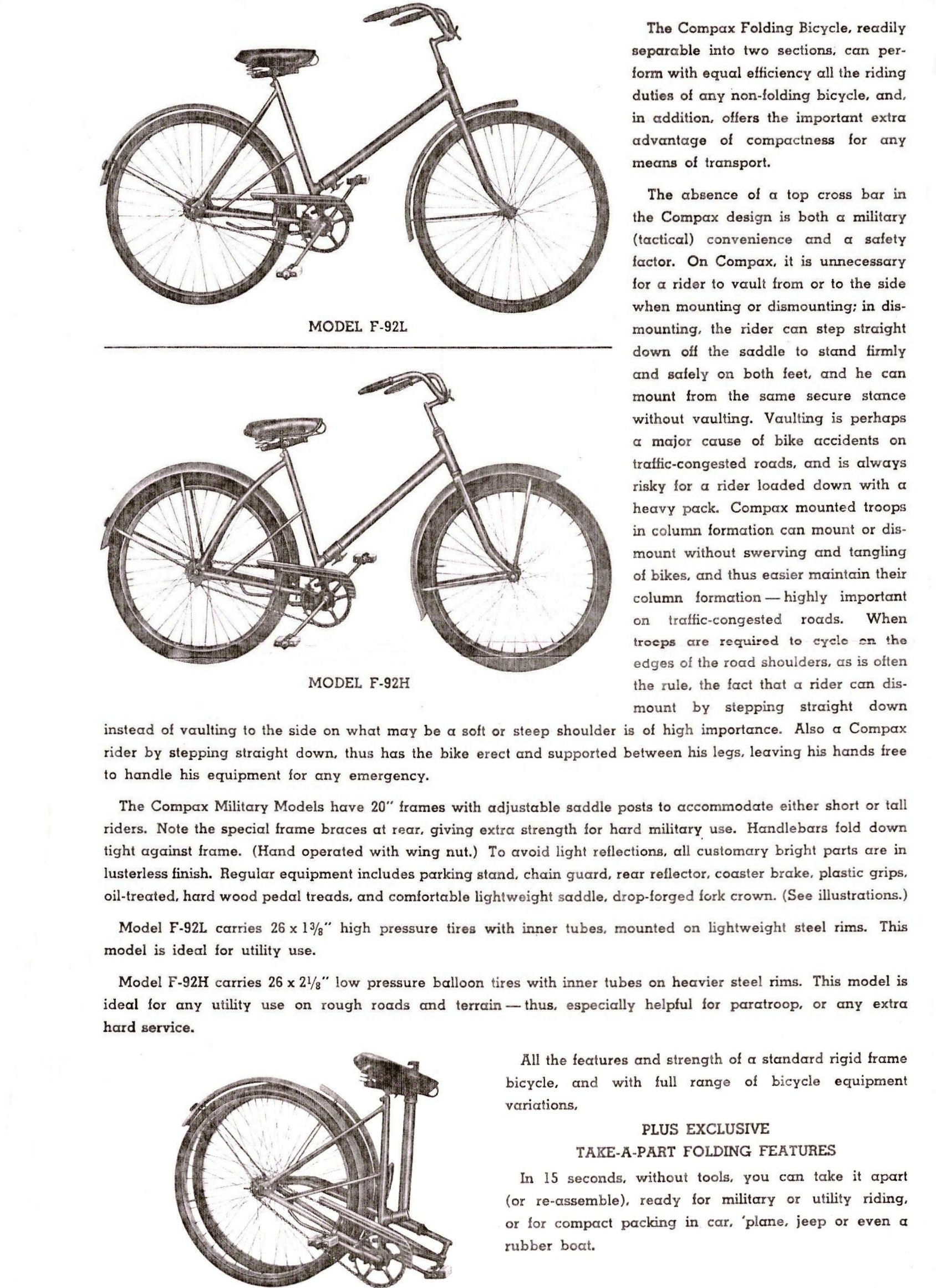 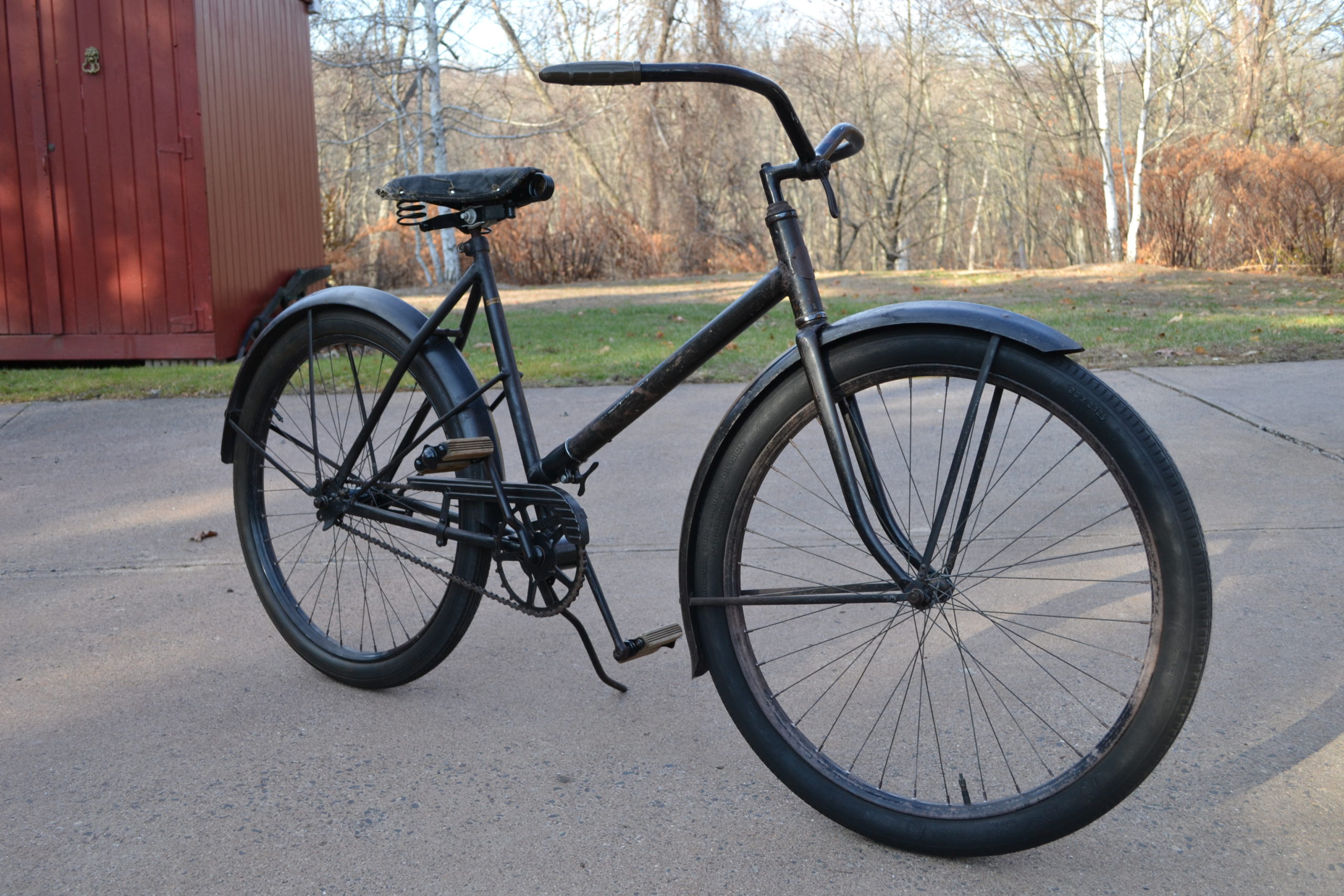 This is a model F 92-L that I currently own. This bike served it’s country during the war at the Navel Air Base in Lakehurst New Jersey. It was originally red with civilian blackout parts but had been repainted and some parts had been replaced. When restoring it I took the liberty of doing it in proper Navy colors. 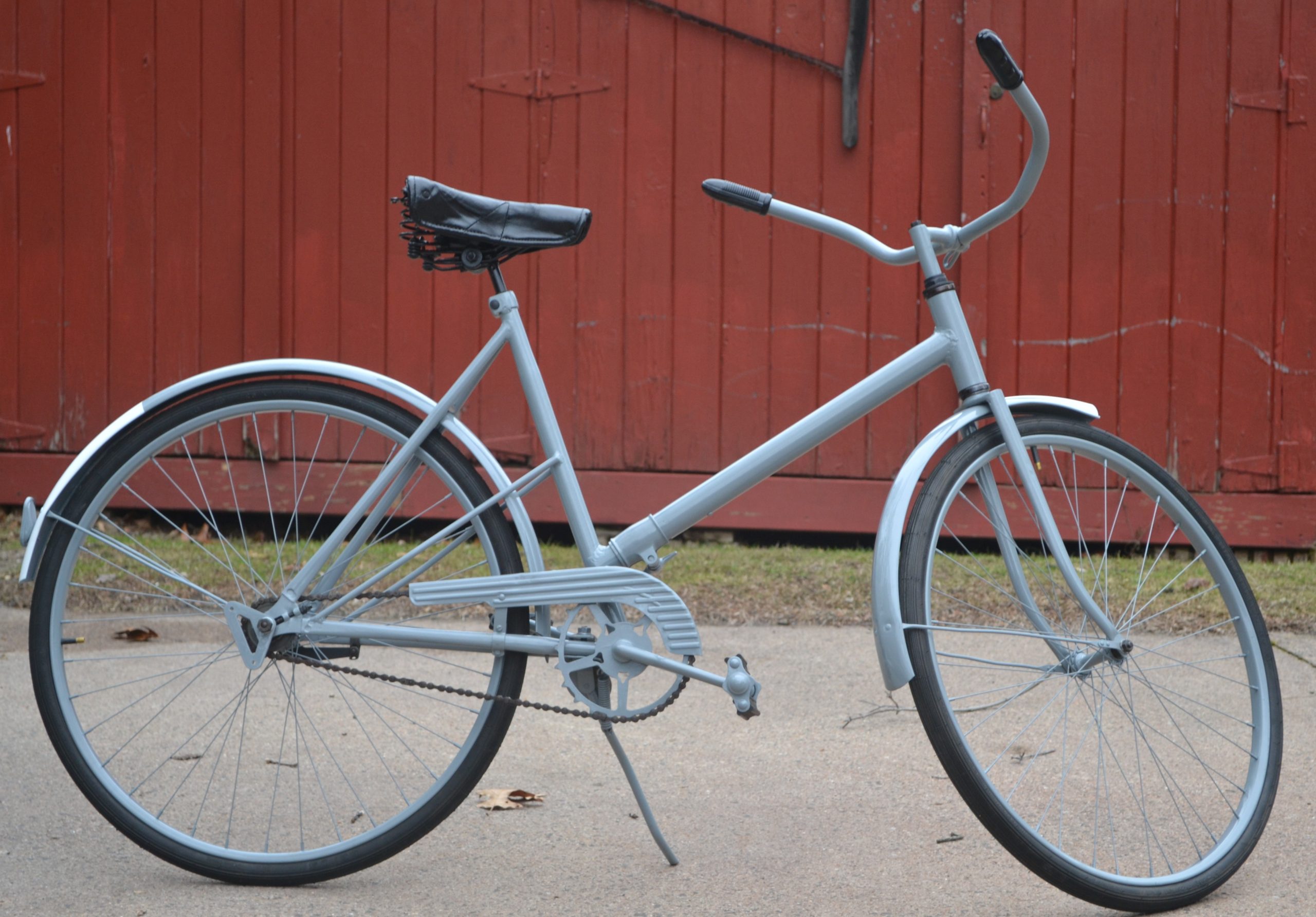 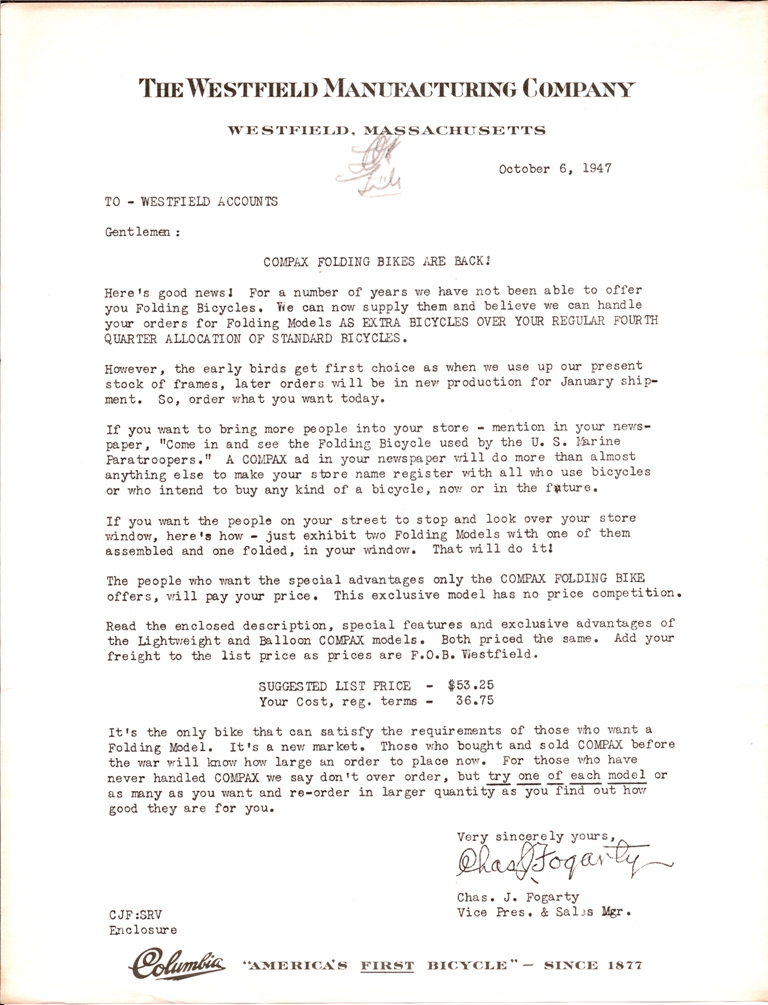 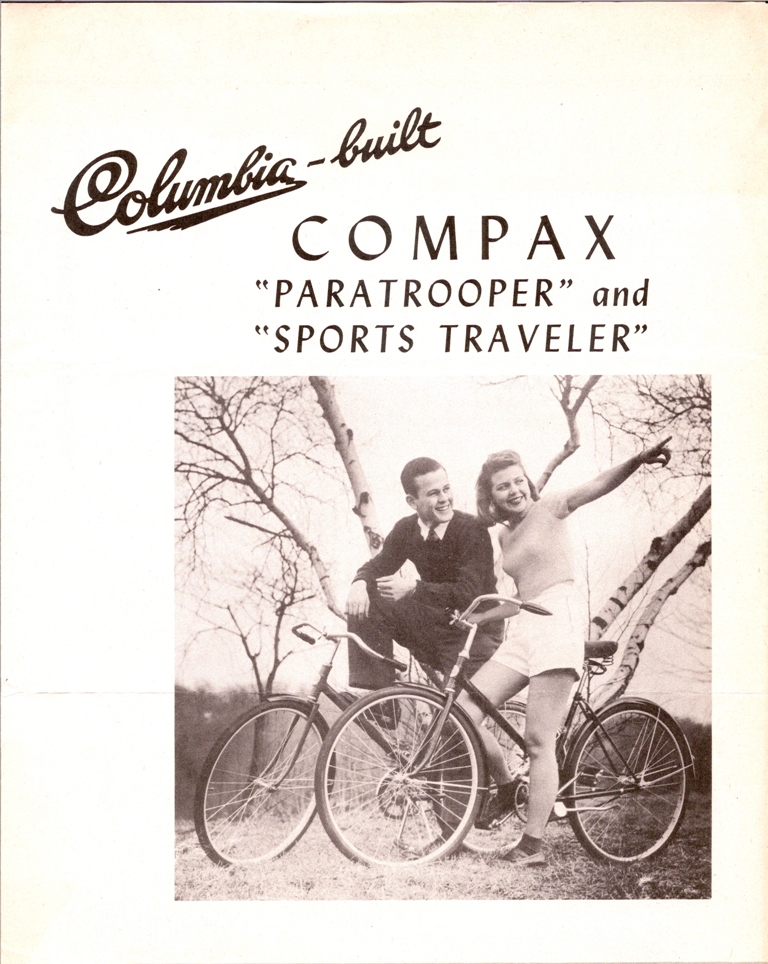 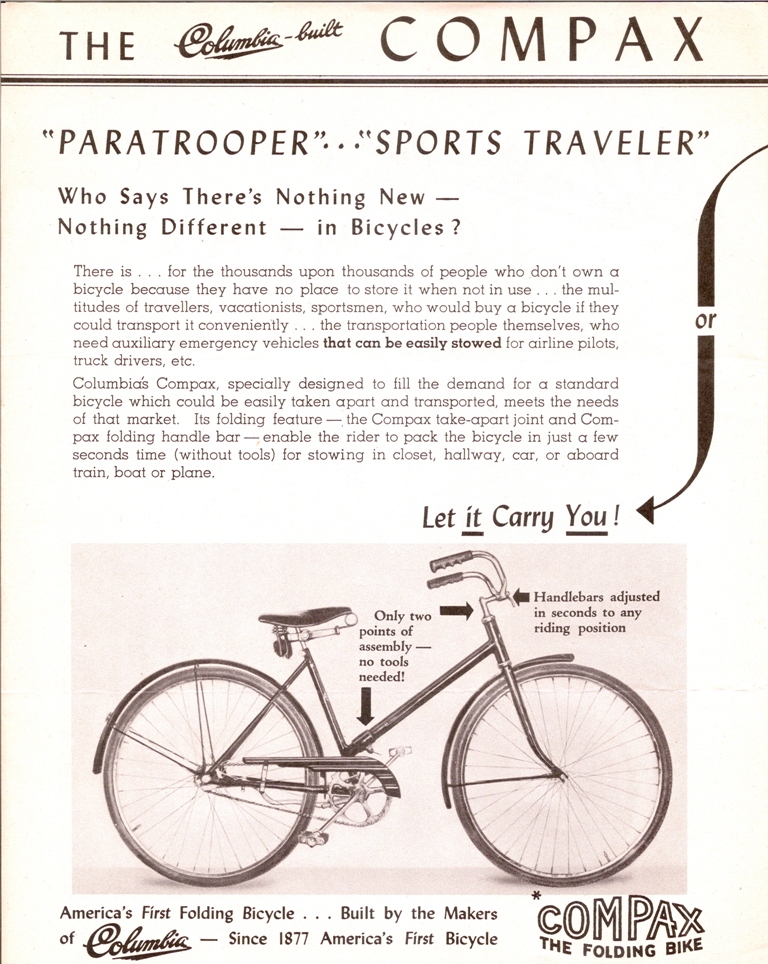 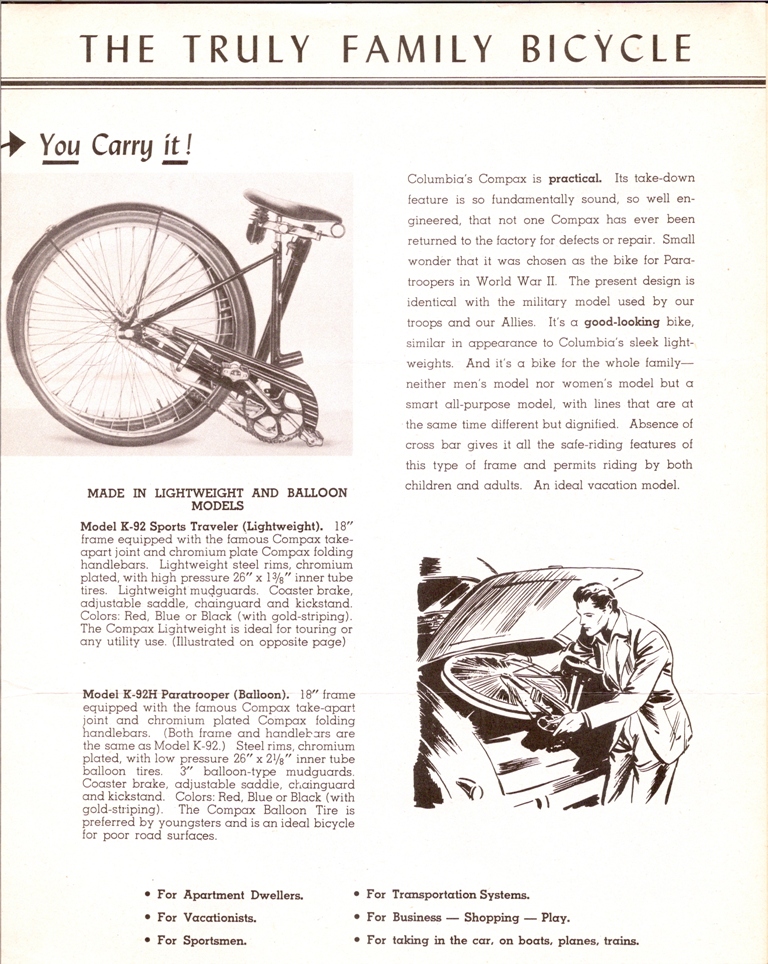 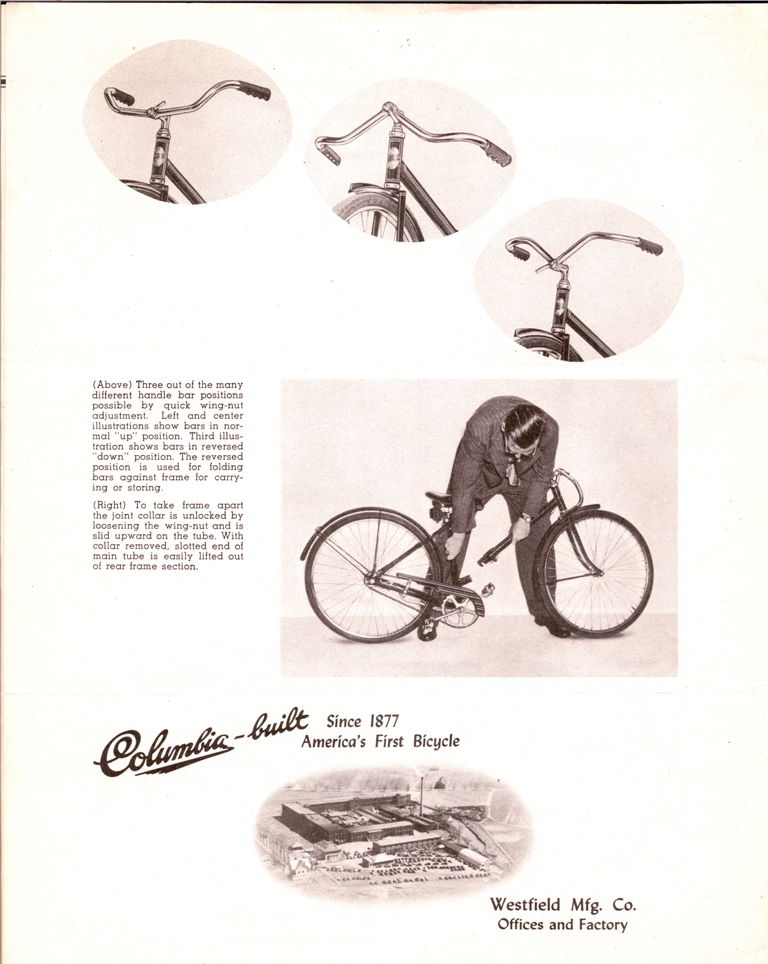 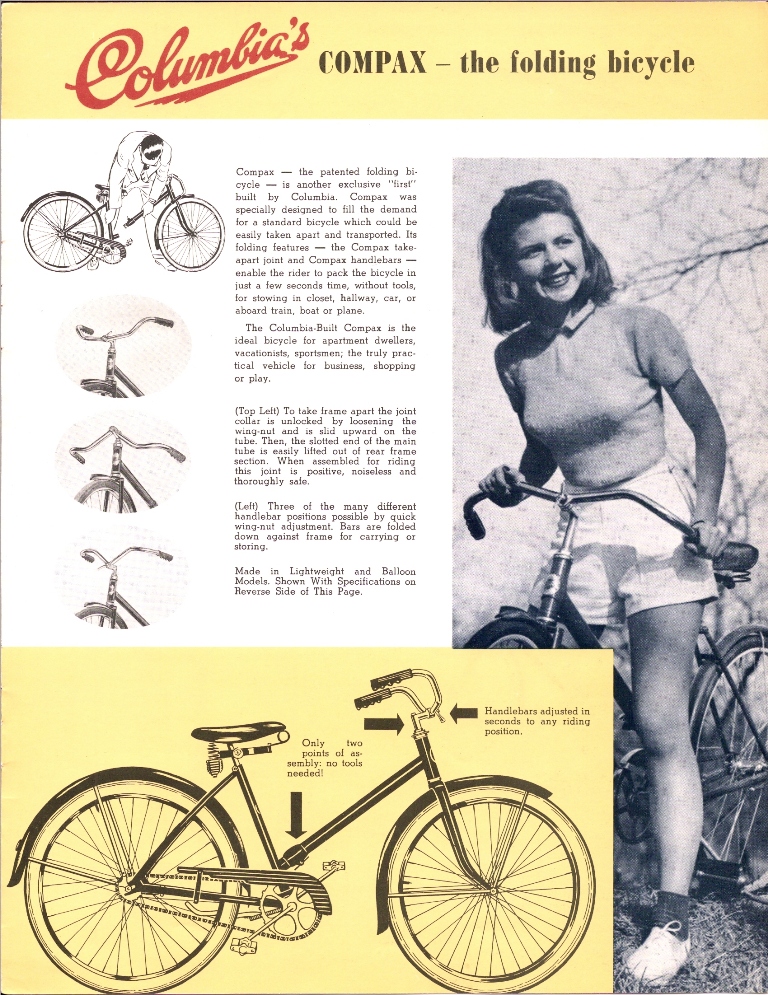 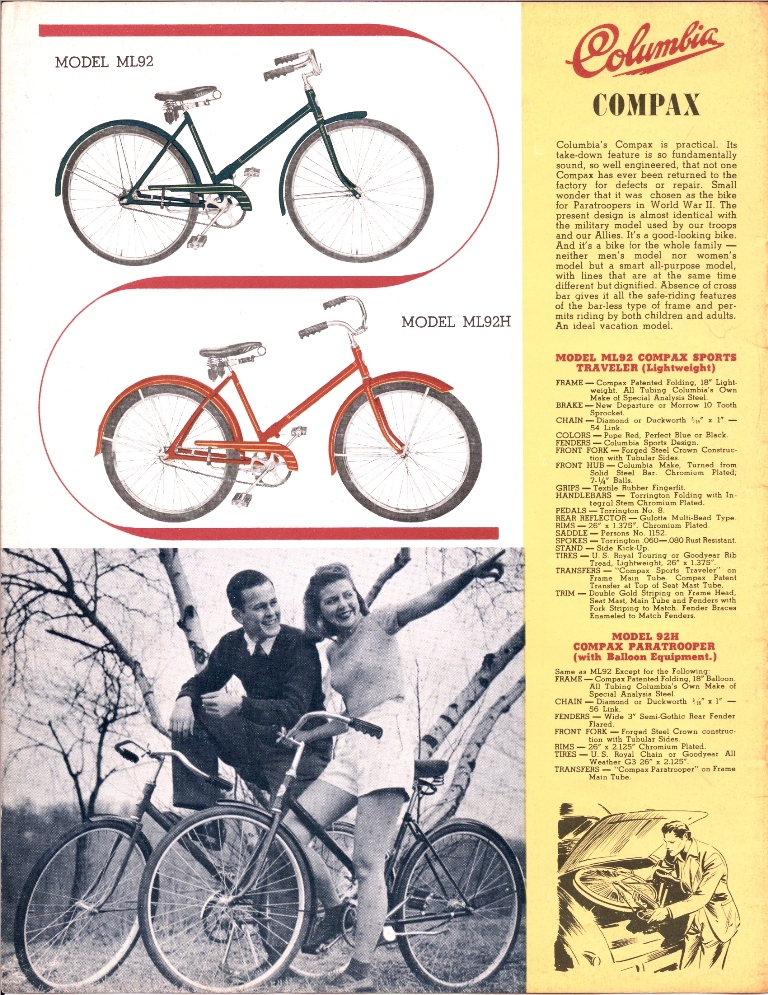 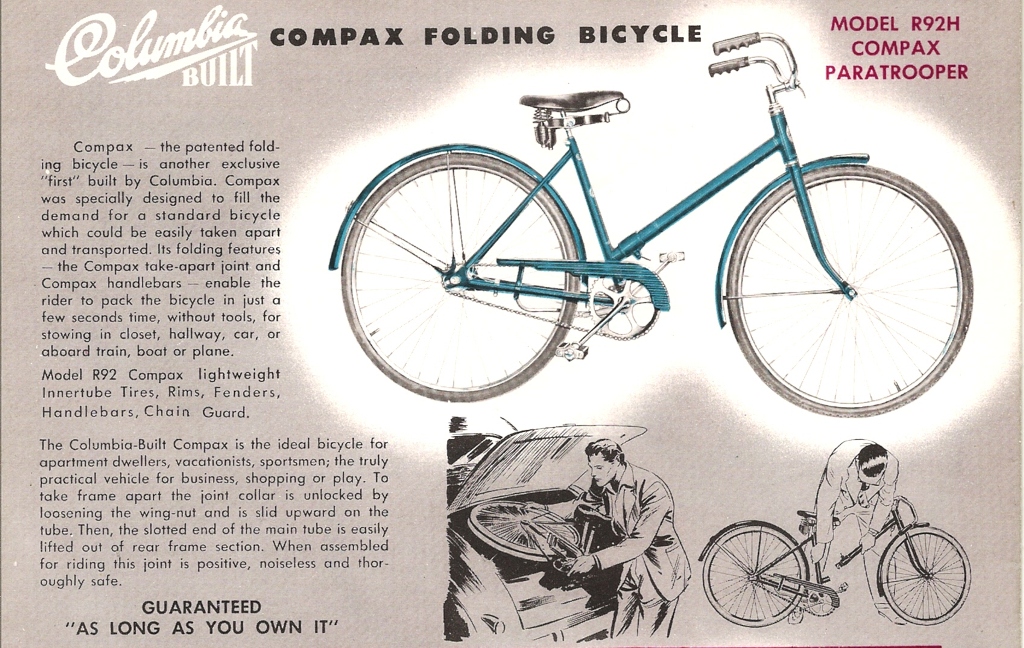 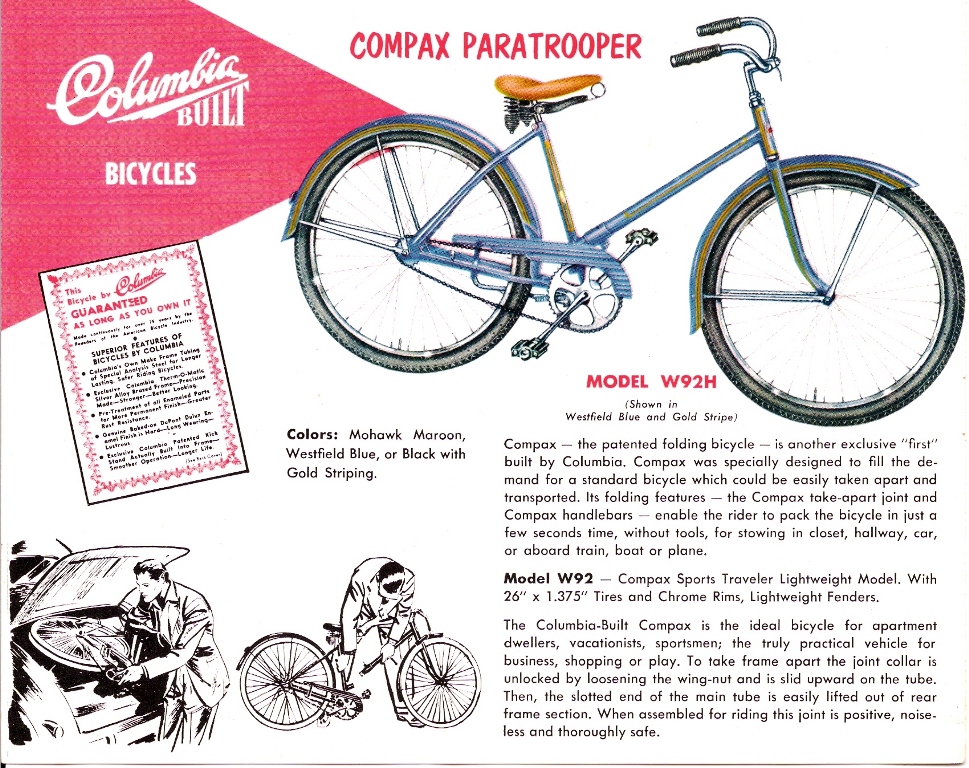 1952 is the last year I have catalogs showing the Compax Folding Bike.  Eventually Columbia would import a folding bike made in Denmark named the Commuter II. This would be offered in 1967 and 68 but they would not make their own folding bike again.