1935 Colson Rover- Fully Restored Before & After

Hello everybody, this is something I have been wanting to complete, and show ya'll for a long time, and I have finally finished it. This is my "new" 1935 Colson Rover, Balloon Tire Bicycle. My favorite things and time period in history is perhaps the 1920s and 30s, and I really wanted a nice deluxe bicycle from back then. So I bought one and restored it best I could. The restoration took at least 120 hours over 6 months to complete, finished just one week ago. This is the most thorough and complete restoration I have done to date. The seat alone took me over 10 hours to finish, all hand stitched- I bought the leather from member alecburns. Being that I am a younger fellow with a pretty limited budget and have no power equipment what so ever, that didn't really help things, but I got her done all by hand just the same. This bike was originally from Ohio, and was pretty far gone, with many mismatched or missing parts, pretty thick surface rust and pitting, and some parts in need of fabrication. Here are some photographs; some show the bicycle before restoration, with all the parts and pieces cobbled on there, and the after photos of the complete working bicycle. I have ridden this bike about 10 miles all around town so far, and have gotten her up to 30 Miles per hour, and all seems to be holding together nice and tight still, and I hope to get a good many more decades of service from this machine. It is rather exiting to get up to that speed on an 85 year old bicycle no doubt. Thank you all for reading, and for your help in achieving my goals! 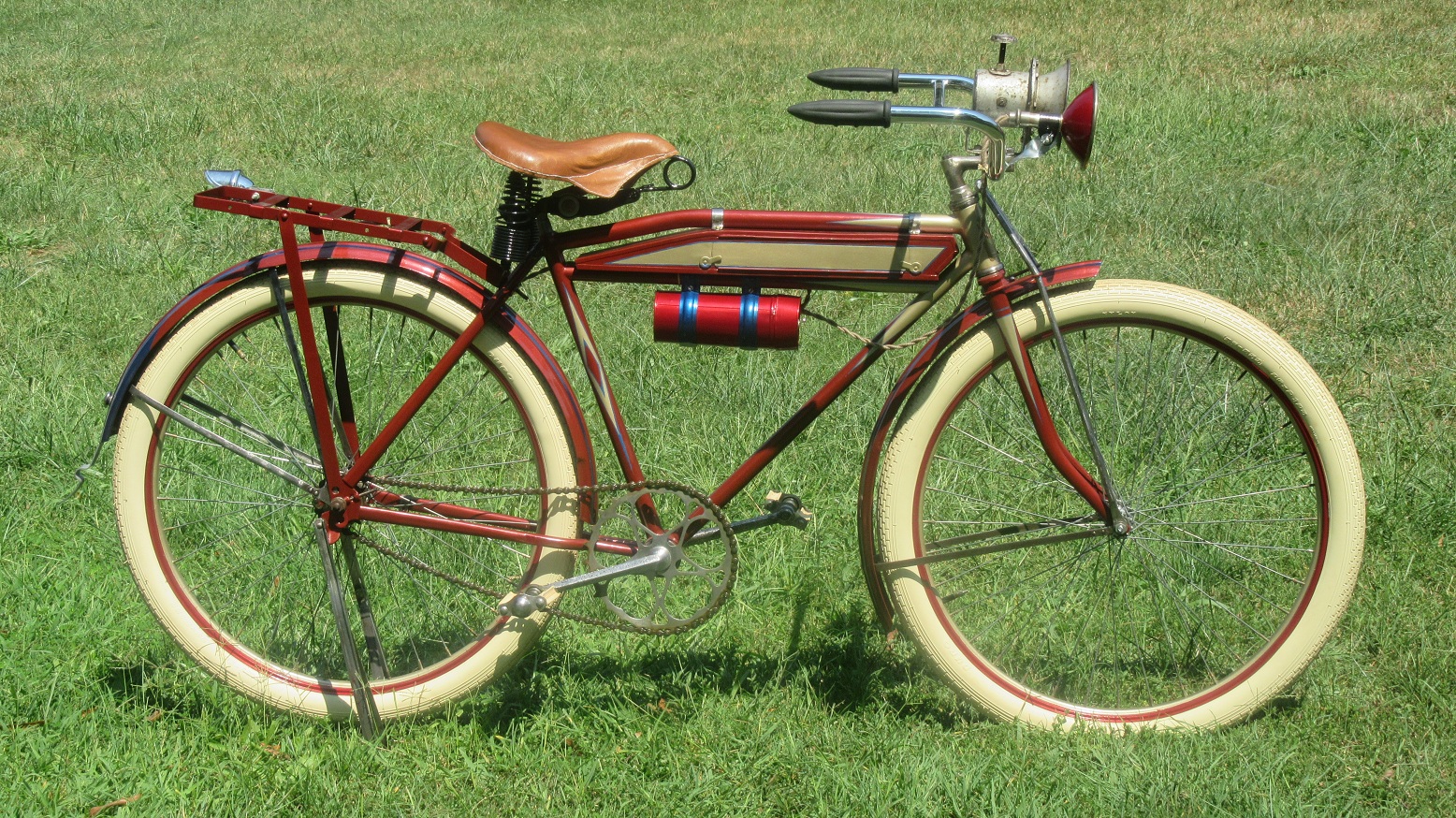 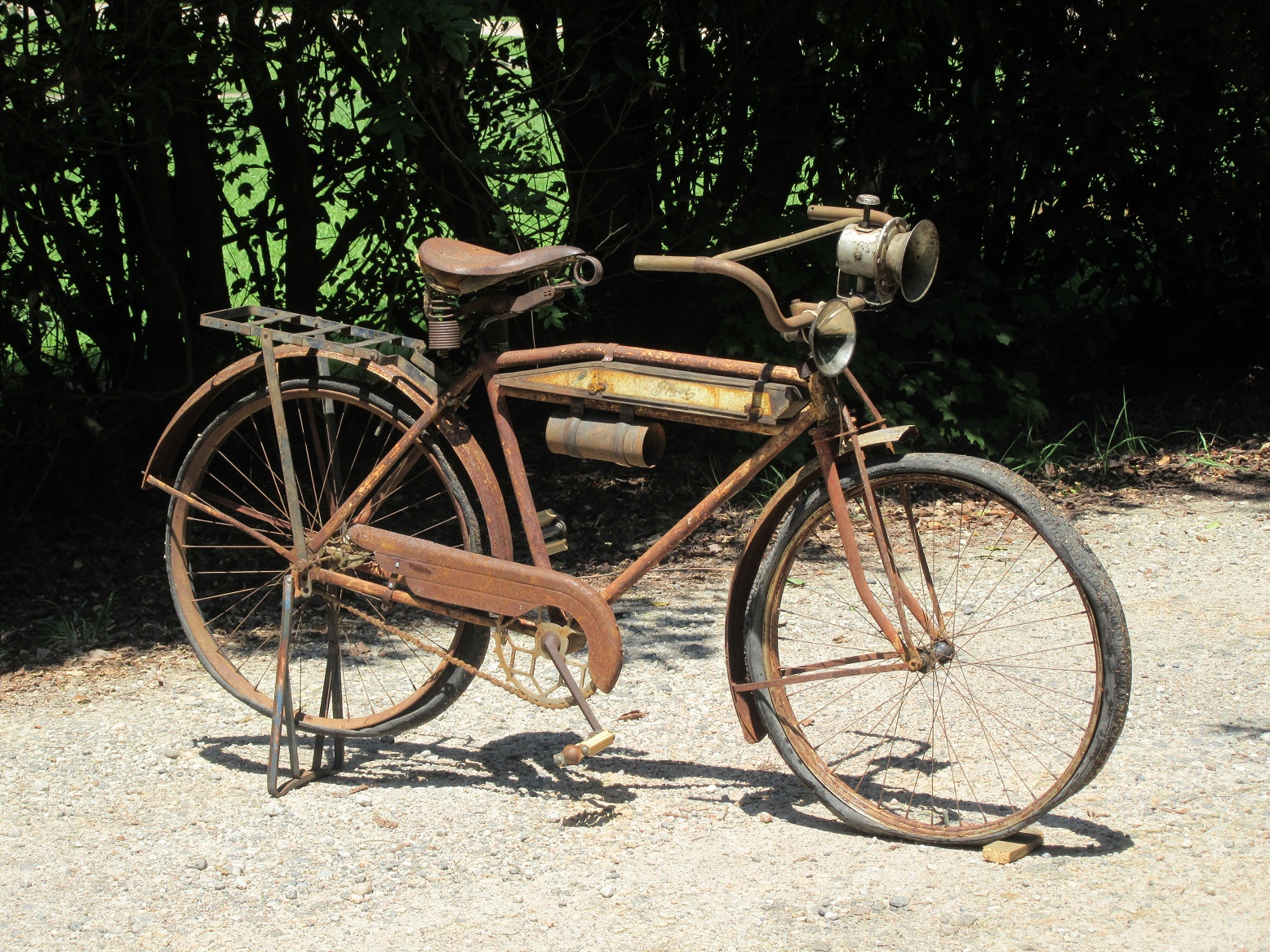 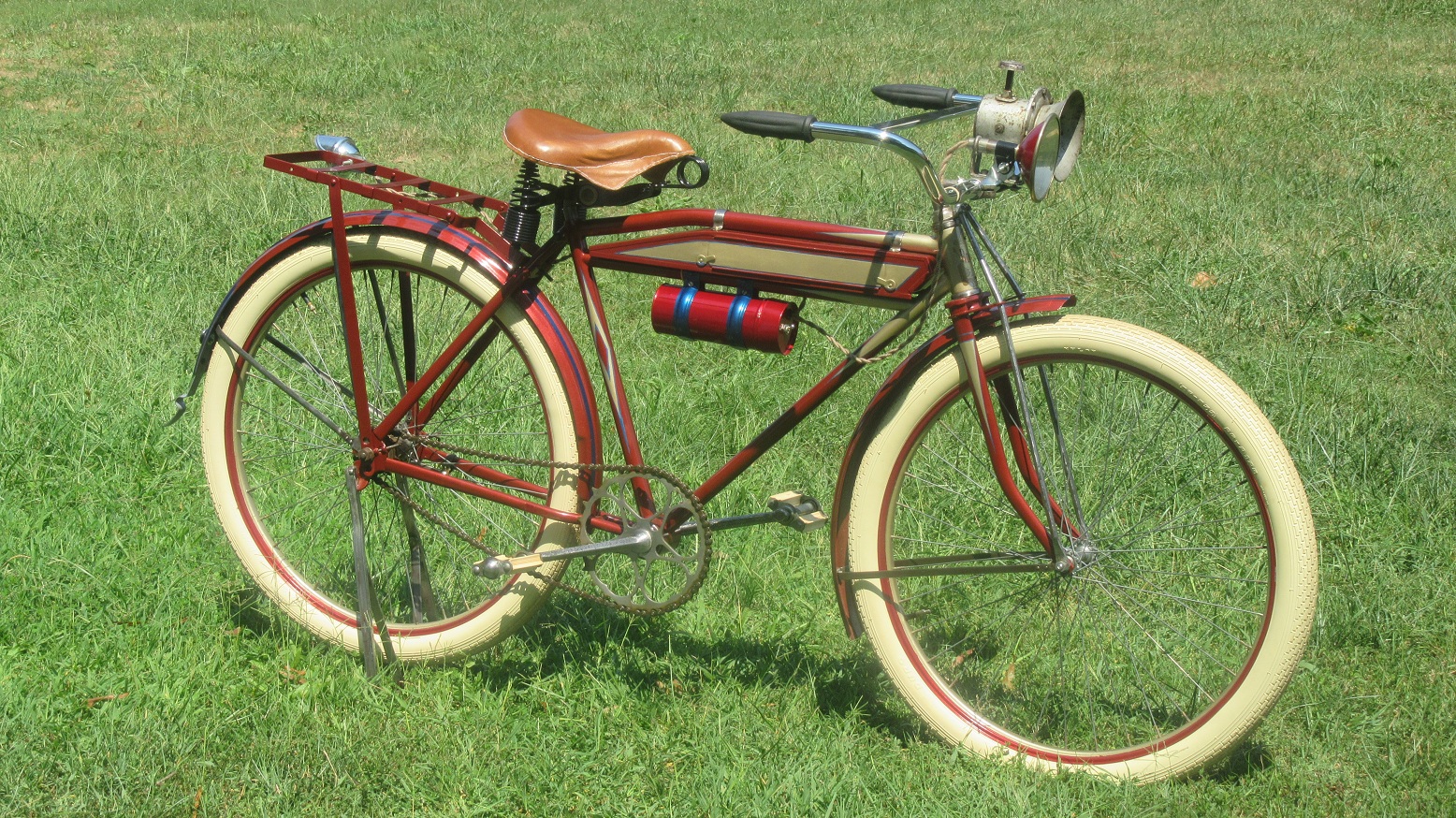 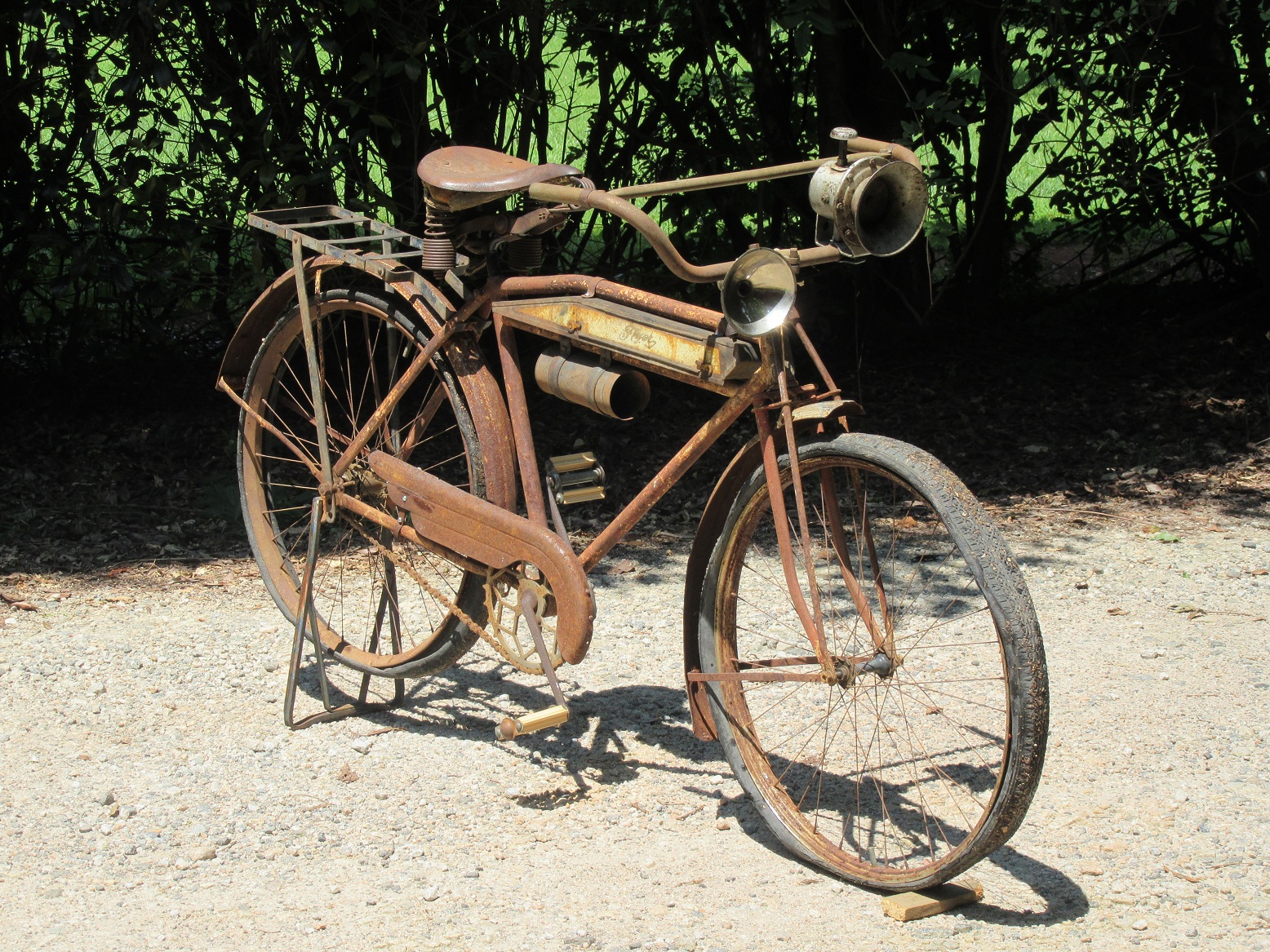 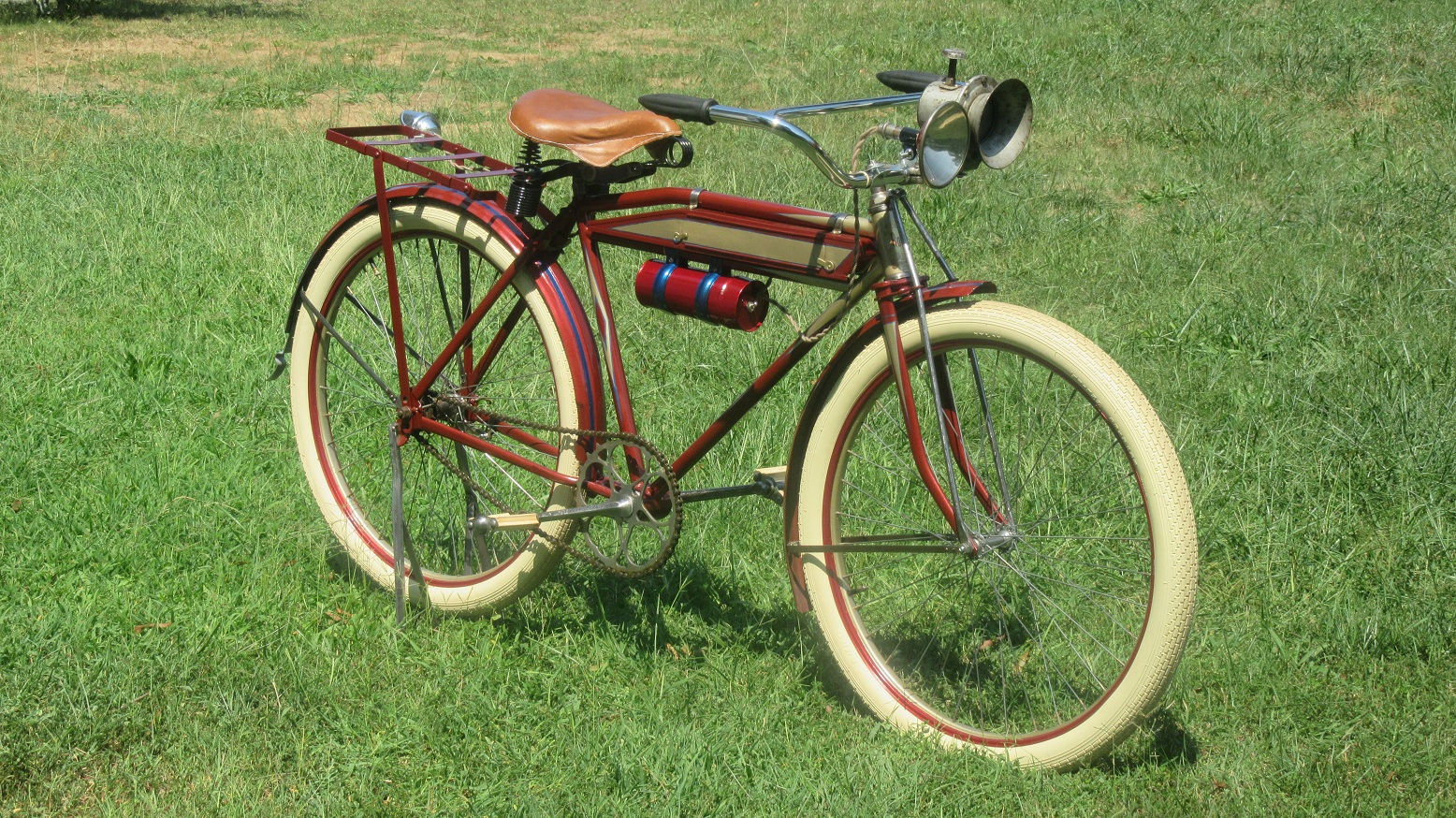 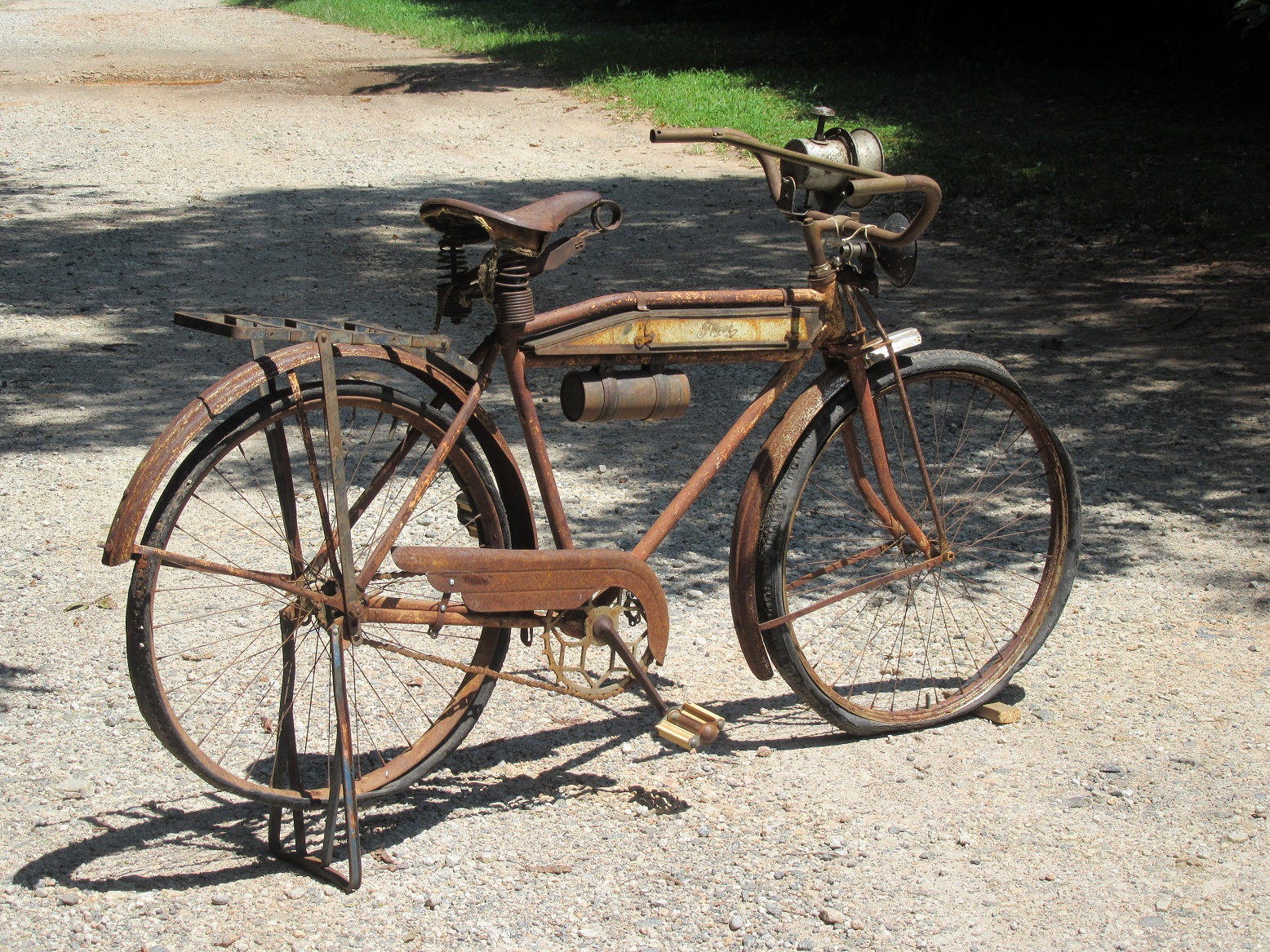 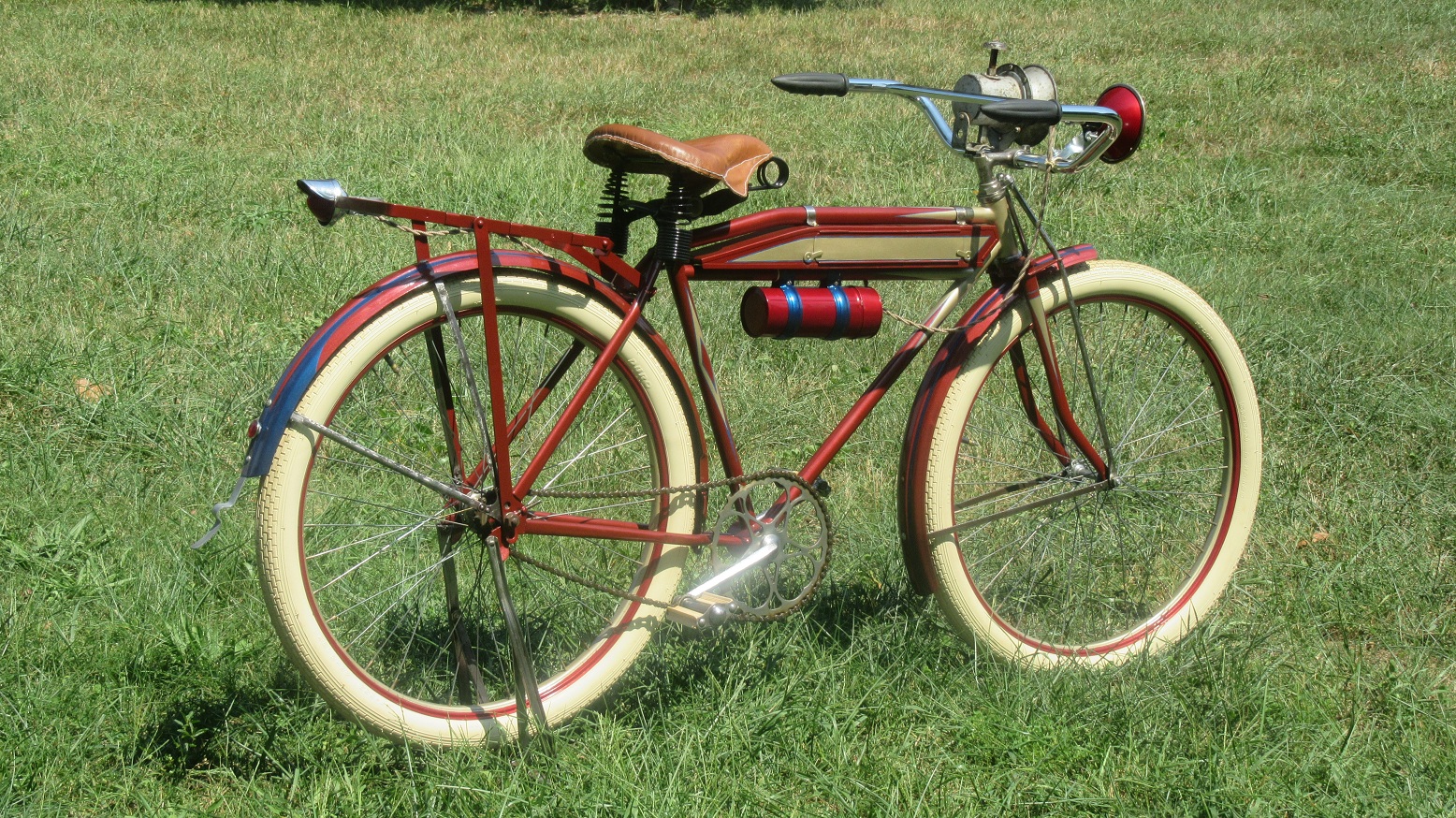 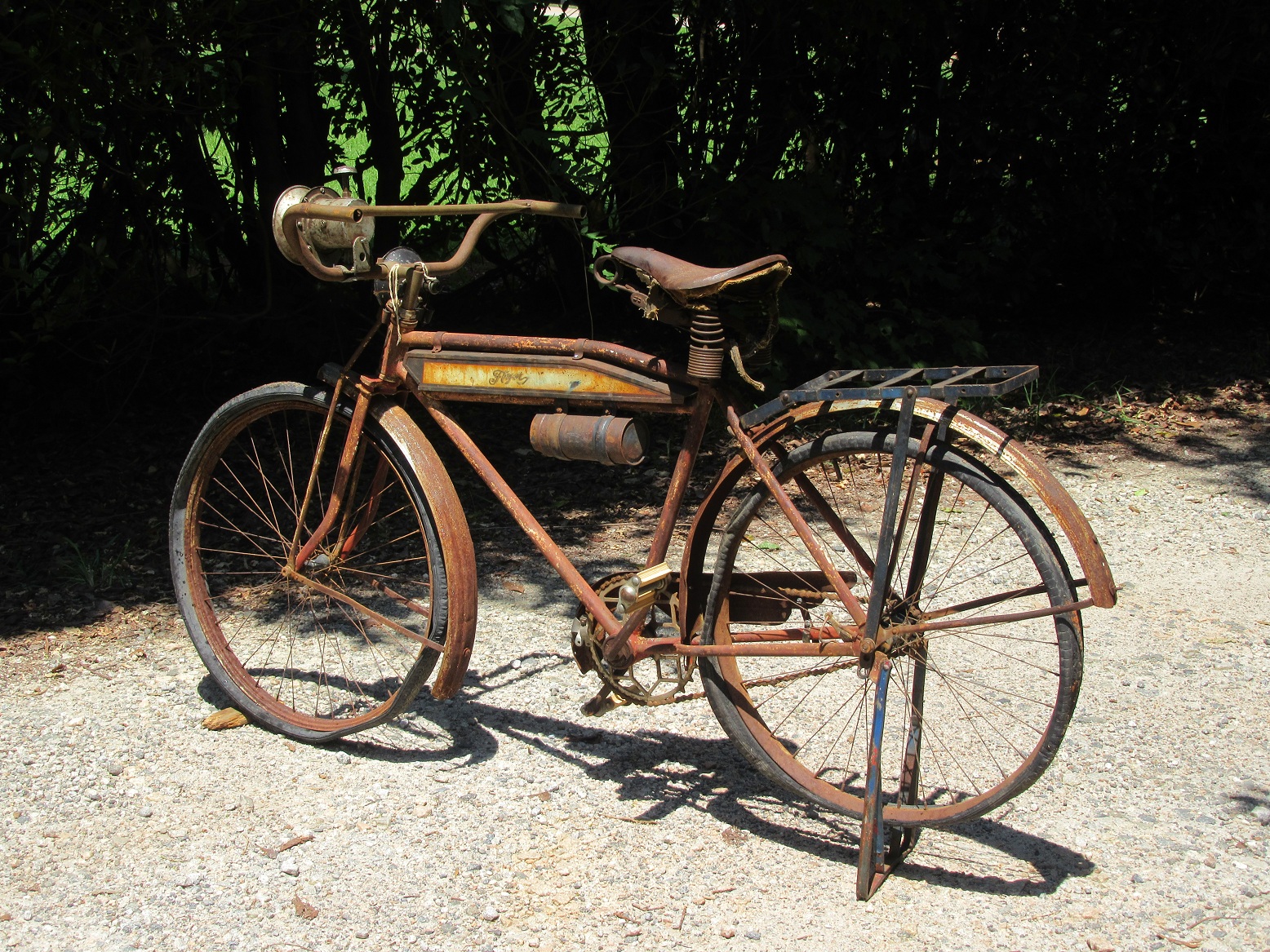 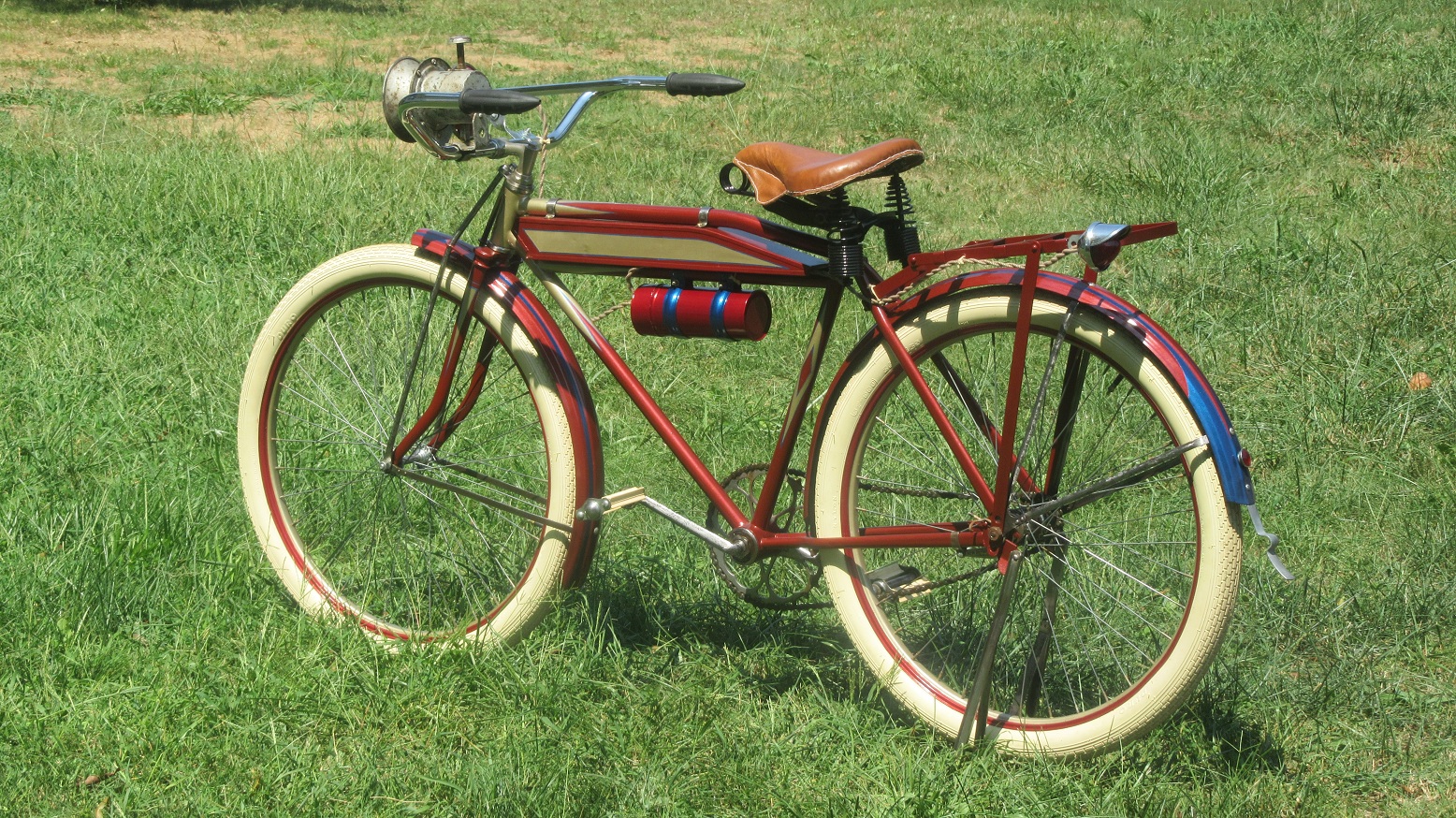 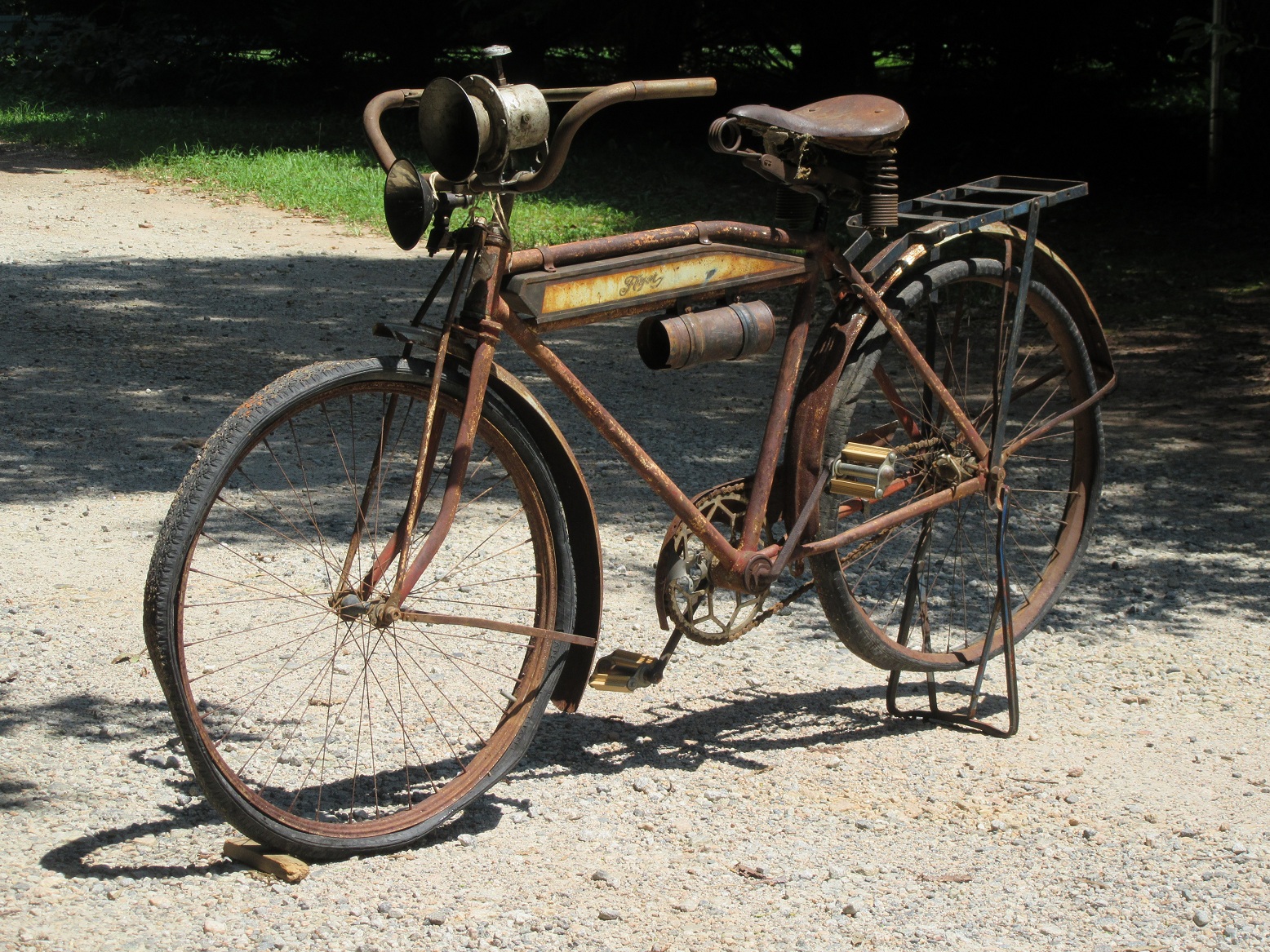 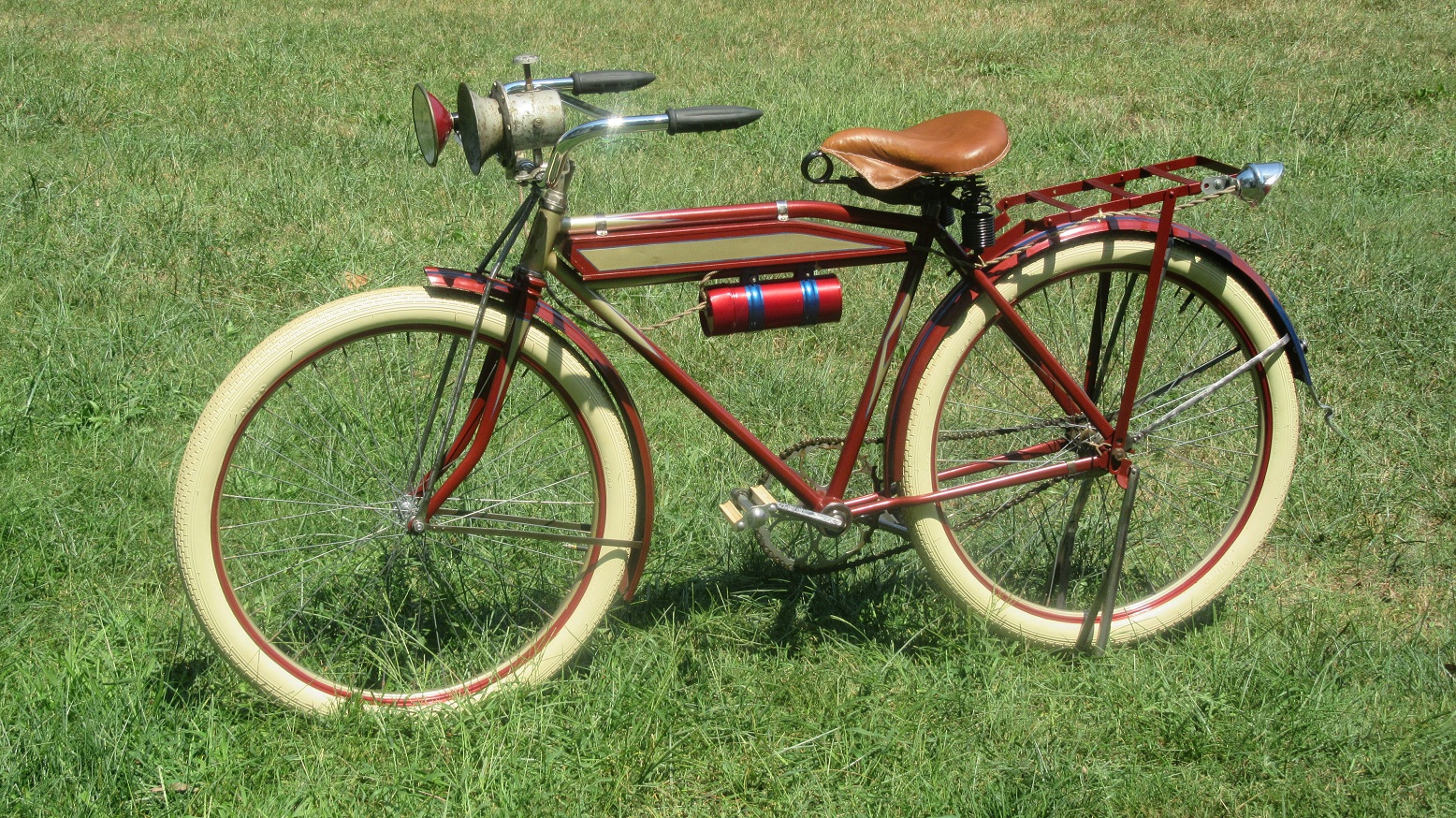 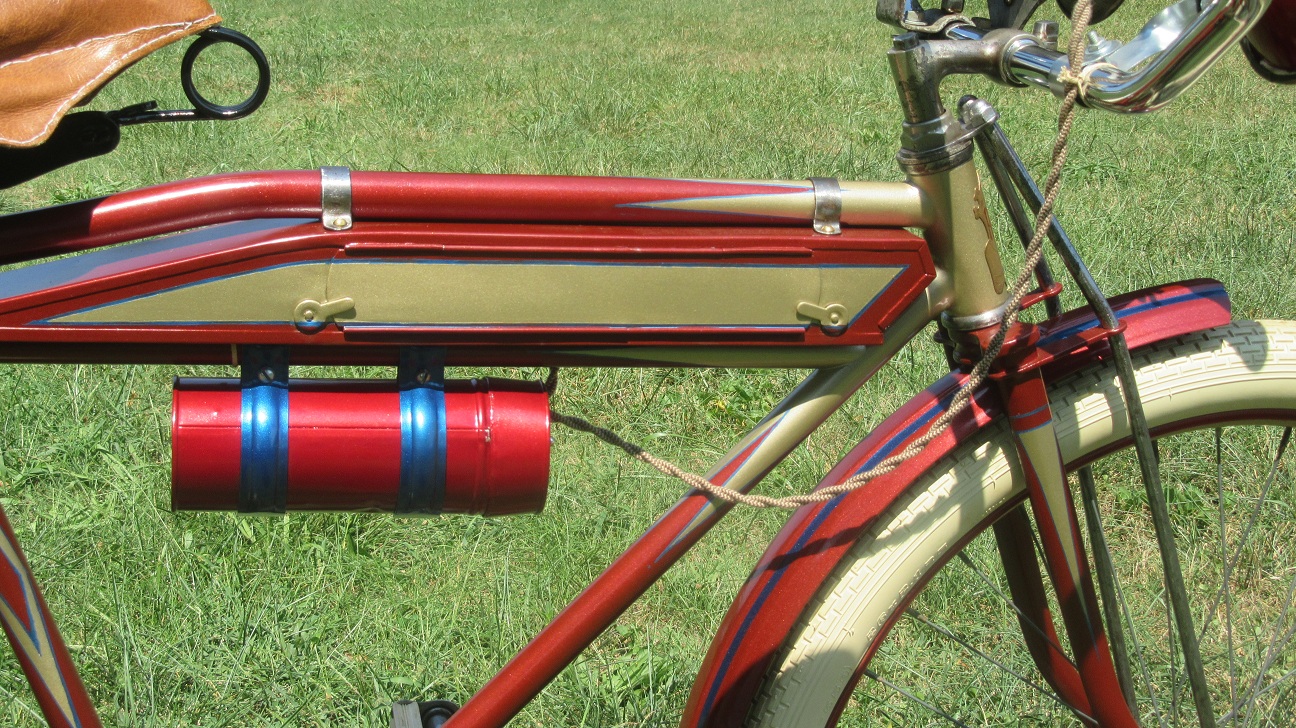 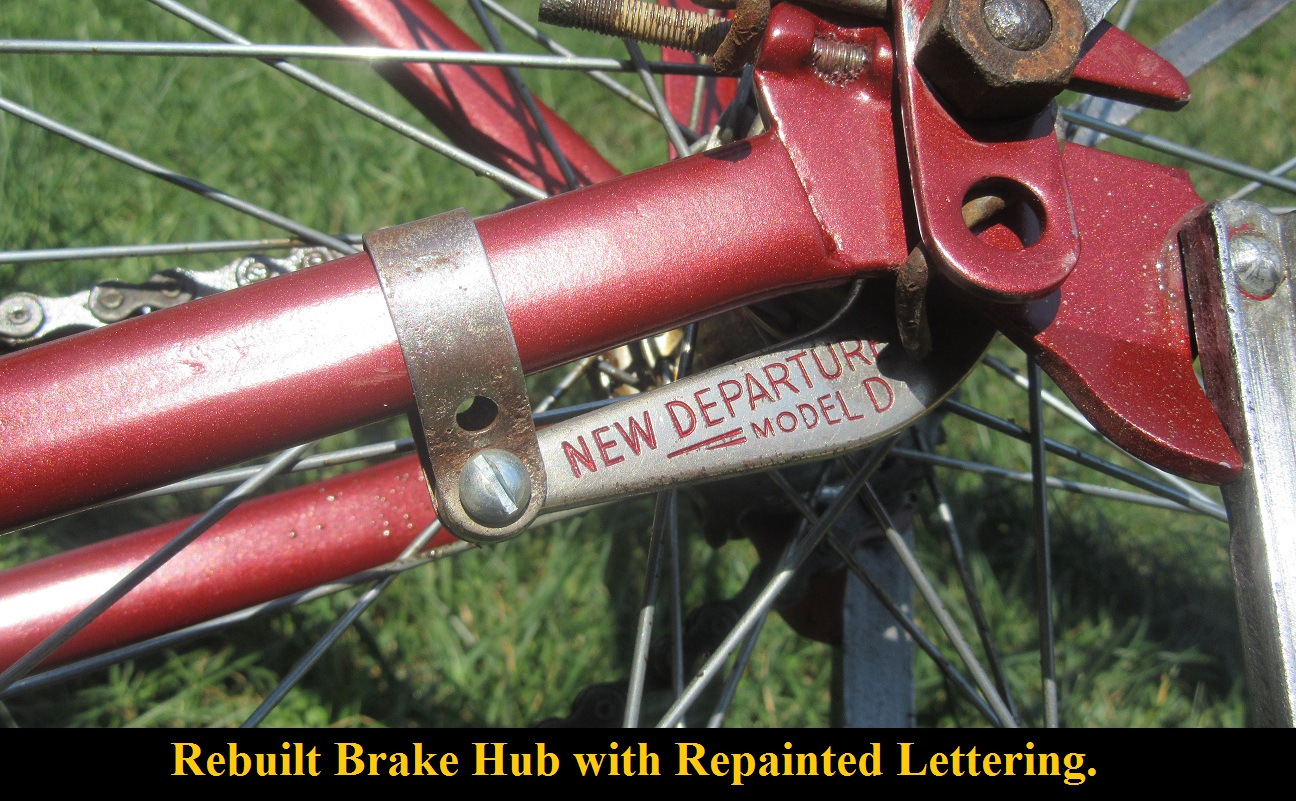 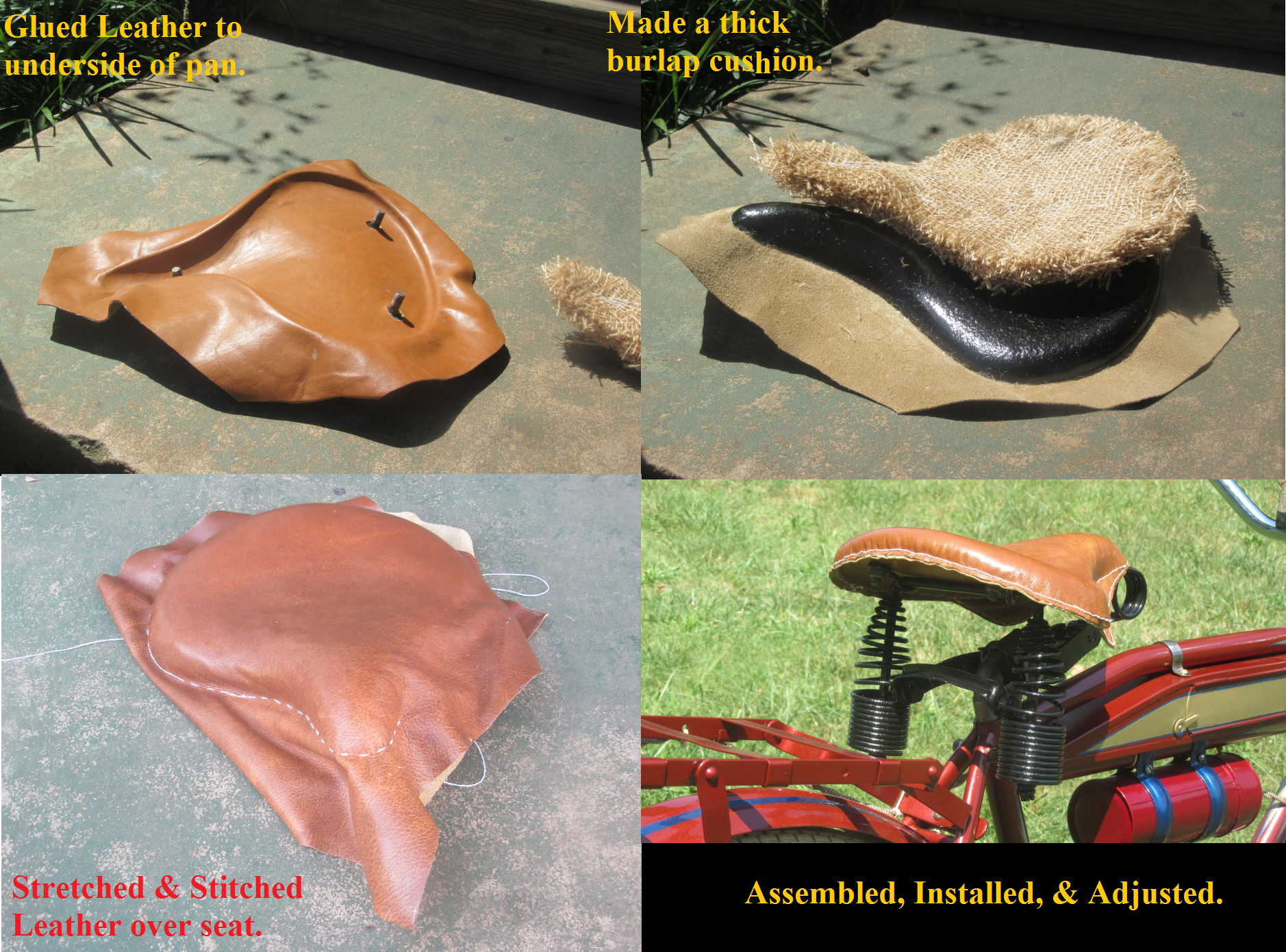 Staff member
Love the badge - you should be very proud - well done !
Mark (So. Cal)
markivpedalpusher@gmail.com
949-933-9795
For So. Cal events click Cyclone Coaster here
And click here for local events posted on the Cabe

The Cabe Terms of Service and Rules
The Cabe Community Guidelines
The Cabe Sell/Trade Rules
.

Looking good! You need to bring it to Rock Hill Saturday. V/r Shawn
My PM is turned OFF-Please email

A "Veteran" -- whether active duty, discharged, retired, or reserve -- is
someone who, at one point in their life, wrote a blank check made payable to
"The United States of America," for an amount of "up to, and including their
life." That is honor, and there are way too many people in this country
today, who no longer understand that fact.
G

Very nice work, all around.

Very nice.
My friend said onions are the only food that can make you cry. But that was before I hit him in the face with a watermelon.

Thank you all very much for your compliments and comments, and for taking the time to read this posting; See you on the road!

Outstanding ! You've got some skills.

That is a great looking bike. Nice job.
I got a FEVER! And the only PRESCRIPTION... is MORE BICYCLES!

Great job! Looks beautiful! You definately need to ramble down to Rock Hill this Saturday and show it off! 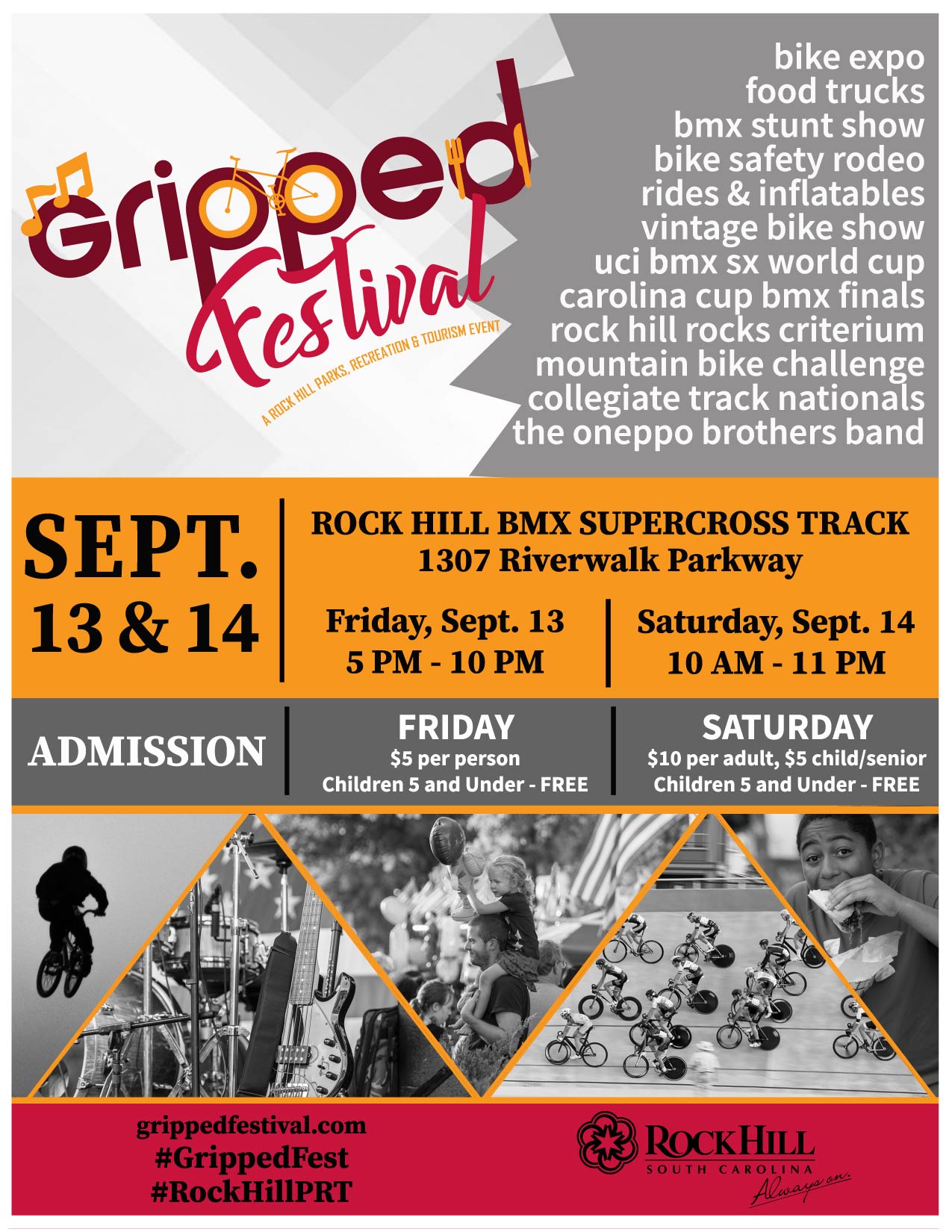 Looks great!. Would you mind sharing the serial number on the crankcase? Wondering if that tank was original or not to this bike...the Colson Flyer tanks had a different clasp. Not sure if Rovers had tanks. Doesn't really matter but a nice bike regardless! 30mph is attainable on many old bikes if the downhill slope is steep enough. How fast can you pedal it in the flats?
Last edited: Sep 12, 2019

SKPC said:
Looks great!. Would you mind sharing the serial number on the crankcase? Wondering if that tank was original or not to this bike...the Colson Flyer tanks had a different clasp. Not sure if Rovers had tanks. Doesn't really matter but a nice bike regardless! 30mph is attainable on many old bikes if the downhill slope is steep enough. How fast can you pedal it in the flats?
Click to expand...


Hi! The serial number on this bike is 5A25XX, which dates it to 1935. It is a genuine early balloon tire model. The tank is not original to this this bike, and is one that I had laying around for use on such a project as this; in fact, this bike was pretty stripped down, so I wouldn't be surprised if it has parts from five different bikes on it, of course all of the parts used were transpercable between similar models. It even had a 1920s Elgin "snowflake" sprocket on it when I got it as seen in the before photos {this was replaced by a proper Colson sprocket}. I will say that I have seen Colson Rovers & Flyers from the late 1920s, to late 1930's, both in 26 inch balloon & 28 inch standard models, and have seen 3 or 4 slightly different toolbox tank variations on them, depending on age. Some have no tank at all. The earlier bikes seemed to have tanks with the 2 tabs on the sides of the door like mine, but I also saw some with the single tab clasp up underneath the tank. No telling if those were original tanks to those bikes or not, but it was interesting to see such variations on these earlier model Colsons. It almost seems like later Colsons were more standardized. As for her speed, I can get her up probably close to 20mph on level ground, cause the rear hub, I think is a nine tooth, so it has some get up and go! Thank you for reading, and for your interest!
Last edited: Sep 14, 2019

Good work. Thank you for the serial number! You may want to post a picture of it with the bike on Ford Mikes Colson Serial Number thread. Nice!
You must log in or register to reply here.

G
What to buy next?