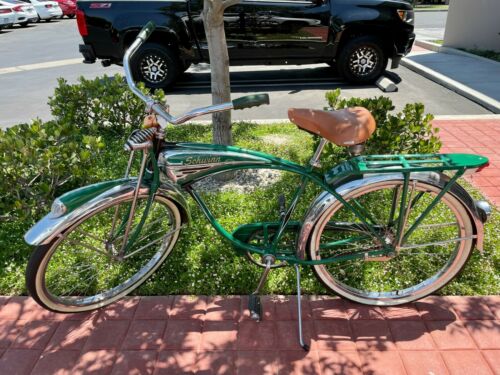 The Tom Jack hole bot back at work.

That's already been up. It's got poorly repainted tank and chain guard on a 95 repop frame where everything else appears repop and or painted fender brackets too. . Looks like the Harley dude got had. Yet, Think maybe, if he opened the bid at a grand it might get some bidding action for, IDK, The repop green is harder to find; $1,400 er somtin? But, I don't think i've ever seen a repop green chain guard to match it, sell on the bay or, at least for a long time. .
IDK but, I probably shouldn't keep telling people how it's so easy to spot a fake. Because, in no time, the so called restoration "Artists" are gonna catch on and it'll get easier to pull em off. Other than most obvious things, it's the pin-stripping that's an easy tell. Especially Chain guards. Neglected by both, "Artists" and buyer/owners, Schwinns' angled tip on the guard is done with about 3/4" long thin, fine pointed brush. It's never squared or or rectangular. It's never a single line across and then down. It's a stroke across and the tip is another touch stroke, a single mark, by placing the brush on its side, pointing (I have never measured but by sight, estimate) about an 30 degree or 4 O'clock angle down. The most common mistake on a fake: There's no brush tip mark on this bike's guard.

To get the correct 95 tank and chain guard plus, whatever else may be wrong, all together again, could be pretty pricey.