I'm thinking no. You have to check the ISO which will be three digits like 559 or something. That will tell you the actual diameter.
H

Where would I find this ISO number please?

Schwinn used some odd tire sizes. The most common we see are the 26 x 1 3/8" and 26 x 1 3/4". Fitting a tire to a rim is all about "bead diameter" which is printed on most tires. Below are links explaining it: http://www.sheldonbrown.com/tire-sizing.html...

It's on the side of most tires, I think that it's the actual diameter and width in millimeters. The 590 is what you're looking for. 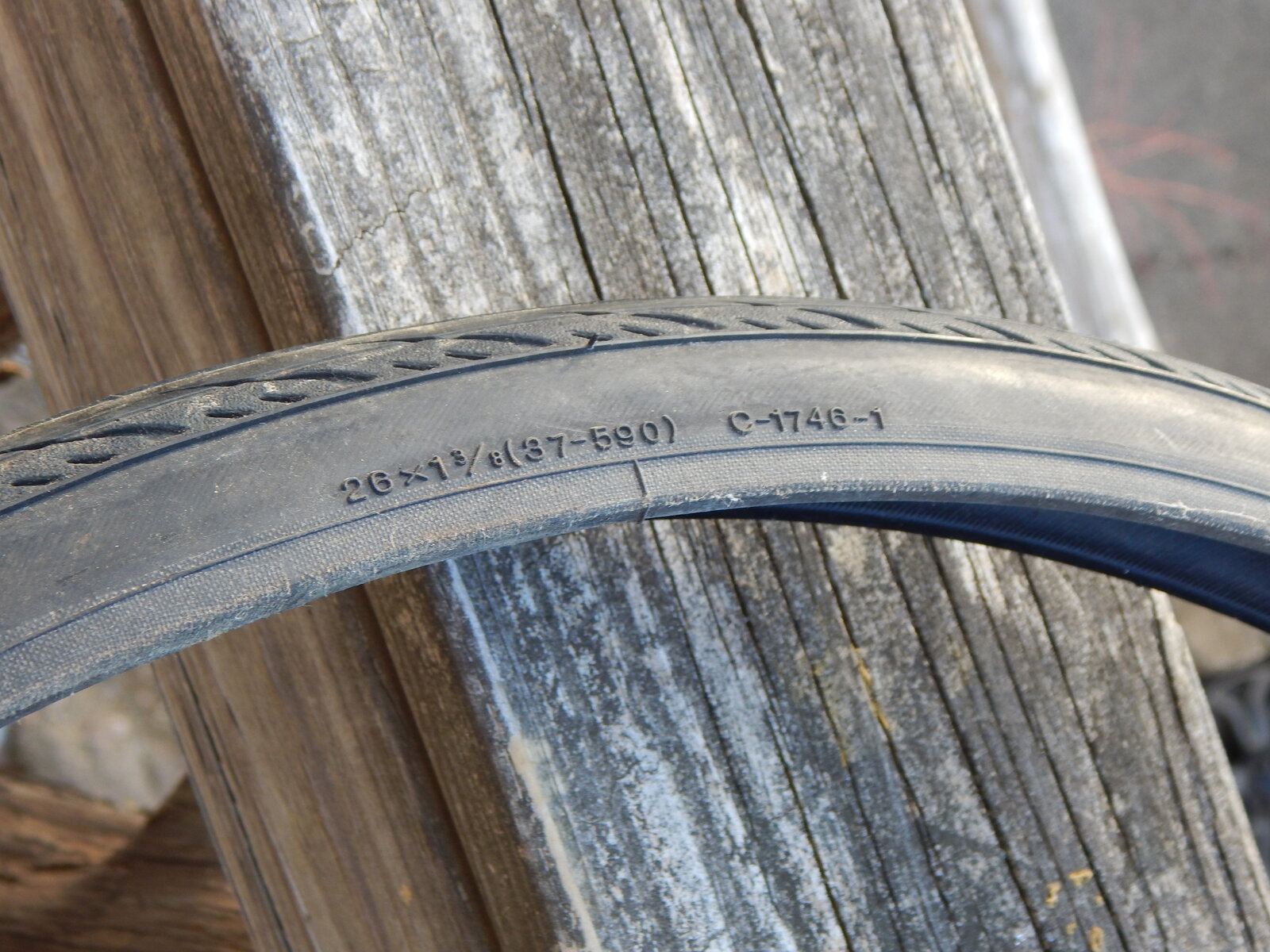 When a box states that a tire will replace a range of widths, it really means that it is the smallest width listed; tires do not normally have a size range. The size is usually molded into or printed onto the sidewalls of modern tires.
H

Thank you for the great information
A

Basically, that is practically correct. There are some very rare and ancient English bikes from about 70 years ago that require the EA-1 (597mm) tire , yes this is the same 597mm that the millions of Chicago Schwinn lightweights of the Seventies, Sixties, Fifties, etc. Examples: Schwinn Breeze, Schwinn Collegiate, also SPEEDSTER, RACER, CO-ED, TRAVELLER and few more variant bicycle names that Schwinn made at times from the fifties until the Chicago end circa 1982.
*****BE ADVISED THAT FOLKS OFTEN CHANGE WHEELSETS ON THESE OLD BICYCLES for whatever reason****
Often it is simply to construct a useable bicycle out of a pile of junk/parts bicycles.

KENDA is the only tire manufacturer that I know of that manufactures the "SCHWINN ONLY" 597mm 26 x 1 3/8 tire.

This KENDA (37-597) "Schwinn ONLY" 26 x 1 3/8 has a tire tread pattern which looks very much like the original equipment tires that the Collegiate, Breeze, and Speedster came with back in the mid-1970's. I think that these Kenda (37-597) 26 x 1 3/8 Schwinn for S5 & S6 rims of the Collegiate/Breeze etc.., are only currently manufactured in choice of either BLACKWALL or GUMWALL. Kenda has produced a WHITEWALL version at times in the past, but I might be wrong but all the current WHITEWALL versions are aged New Old Stock that are at least several years old, and are not fresh stock.
The only difference with respect to the S5 & S6 wheel rims is Collegiates prior to mid/late 1972 have the S5 which has a pronounced cosmetic hump and the later S6 is smooth in that area nearest the spokes. Endtrick/Westrick styles are the reason one has the hump-'ridge' and the other is smooth, that is why you have both S5 and S6 in the Schwinn lightweight 26 wheels of 597mm bsd (bead seat diameter).

IF YOU ENCOUNTER A BICYCLE THAT STILL HAS TIRES ON IT THAT Pre-Date the era in which the tires came with worldwide standard of bead seat diameter, well..... that is exactly why the exact millimeter bsd has been seen on all bike tires since the end of the 1970's...........to help distinguish accurately, to help avoid confusion, and simplify things globally....


The "COMMON" 590mm 26 x 1 3/8 (37-590) tire is common to basically all bike manufacturers except Schwinn. So the old three speed bikes, and old five speed bikes from USA manufacturers other than Schwinn, and from European, Japanese, and other parts of the world, (590mm) is the standard for 26 x 1 3/8 (37-590) tire. There are lots of old basic tourist type ten-speed bicycles from the sixties, seventies, and early eighties which feature this 590mm wheel.
THERE ARE PLENTY OF MANUFACTURERS MAKING VARIOUS NEW REPLACEMENT TIRES IN THIS "Common" 590mm size TO CHOOSE FROM. Millions of bikes came with 590mm wheels, although I don't think any manufacture has featured this size on new bicycles since the 1980's.

Millions of Schwinn Collegiates, Schwinn Breeze and other variants came with the 597mm Schwinn S5 / S6 26 x 1 3/8 from the years 1982 and earlier before the CHICAGO plant shut down.

Here something to clog your brain a little more...............The SCHWINN COLLEGIATE continued for a few years from the 1983 catalog onward but it was simply an imported re-badged GIANT made bicycle, that is easily distinguished by it's 3 piece crank and much lighter overall weight. You guessed it the GIANT made '83 onward Collegiate has the 590mm "COMMON" wheels. There were a lot of tourist and very economy ten and twelve speeds that were sold by SEARS ROEBUCK & CO during the early eighties through at least 1984 that featured the 590mm 26 x 1 3/8 wheels. See the Spring 1984 Sears Catalog and you'll see an economy model of both 10 and 12 speed that was called Free Spirit SUNBIRD which came with chromed steel Rigida Chromida-Delux 590mm 26 x 1/3/8 wheels. Those bikes had cottered 3 piece cranks too which had been obsolete since at least the early seventies. THIS IS WHY THAT WHEEL SWAPPING GOES ON in bike-coops and bike missions for the homeless population. These SEARS bikes of the eighties, as well as other bikes of cheap origin of the 1970's and sixties often have very good quality chromed steel wheels if the wheels aren't rusted and exhibit no real damage.
The same is true today on certain inexpensive Target & Walmart bicycles like Pacific Cycle's schwinn admiral and others with the 700C (622mm) that is seen on these current day big-box store 'hybrids' that feature the approx 37-622 size which is about the same size road patch of tire as the ancient lightweight 3 speeds/5 speeds with 26" 590 or 597 once had. Obviously, the 700C , 37-622 tire won't fit, and neither will a 590 or 597 twenty six fit BECAUSE THEY ARE ALL DIFFERENT!!! However you may find that Replacement Inner Tubes that are labelled on their box packaging that they will fit all three.................you're obviously wondering, oh what the heck, and hows that??, while rolling your eyes and scratching your head.........WELL, IT SEEMS FOR THE INNERTUBES ONLY, that there is enough rubber stretch that for certain widths, given those limitations that the TIRE INNERTUBES may adequately interchange IF the box packaging specifies the range of tire sizes and width Applicable for that particular INNERTUBE. I recommend that you obtain New innertubes that are known to be quality and the size that works best for your application. Not only the size, but with the Schrader valve stem's overall length that works best. Heavy Duty thorn resistant tubes are recommended if goat-head spurs and thorns or road debris & broken glass are common where you commonly ride. If you have a modern roadbike too and you'd like all your bikes to have the Presta valves, you can easily do that too, but my belief is the Schrader is more durable, more reliable and better, not to mention simpler to inflate. Road bike warriors will accept certain possible shortcomings if only to save the overall total combined weight of two USA forever first class postage stamps. Unless you're riding something like what the bikes that the tour de france competitors race with, then don't worry about weight savings or how to make the bike faster. Do seriously consider wearing a helmet while bicycle riding, if you are not currently doing so.
You must log in or register to reply here.