Schwinny said:
Yes, the stroke is how long the arms are. Measured from crank centerline to pedal centerline. Most are 6.5" but "modern" one piece cranks sometimes show up as 7" and even little longer. They usually have the length in millimeters cast into the crank between the threads as far as Ive seen. 25mm = 1 inch.
I almost bought a 185mm at the salvage the other day but I really dont need it, just unusual. I like a 7" stroke on my lightweights.
Click to expand...

Ok, cool. I'll check and see if there's a number on the crank.

Schwinny said:
Yes, the stroke is how long the arms are. Measured from crank centerline to pedal centerline. Most are 6.5" but "modern" one piece cranks sometimes show up as 7" and even little longer. They usually have the length in millimeters cast into the crank between the threads as far as Ive seen. 25mm = 1 inch.
I almost bought a 185mm at the salvage the other day but I really dont need it, just unusual. I like a 7" stroke on my lightweights.
Click to expand...

Cool! I'll have to take that piece over to the I.D. and value thread. It might be better to sell this part to someone who's restoring a Redline than for me to go and try to adapt this to an old cruiser.

Thanks! There's a 20 inch AMF Sportmaster tjwilson on ratrodbikes.com built last year for the 2020 Muscle Bike Build Off that serves as the main inspiration for the direction I want to take this bike.
R

Bike from the Dead said:
Thanks! Yeah, that's one of the things that attracted me to the Falcon. Good luck finding one! These bikes apparently don't pop up for sale often. I saw one other version of this bike on Marketplace, but it was... well, it had a number of good ideas for modifications, but every one of those ideas was executed poorly. That, and the seller wanted $800 for it. Still, if you can find an example for a good price, let me know! We could all join a thread for these obscure AMF bikes!

That'd be pretty interesting if that crank/sprocket combo turns out to be a very sought-after piece! I'll leave that piece alone for now, just in case the lettering adds value to it. Longer stroke? Is that the crank arm length, or what?
Click to expand...

Yep, the 26"bikes have longer crank arms than the 20"and 24". Those Columbia cranks appear to be the shorter 20" cranks. Take a measurement once and post on here. Razin.
R

I don't know why, but almost every S-2 wheel I've acquired has the original white and black paint covered up with grey primer/paint. Was that just poor man's chrome, or what?
View attachment 1430592

Just looked up the serial Number. Built on August 1st, 1951. Not sure what's up with the dots above the serial number though. They look suspiciously factory...
View attachment 1430593
Click to expand...

Yeah poor mans Or Mexican rattle can chrome. What ever you want to call it it's a cheap quick fix for UGLY og paint. Good stuff Maynard.

I decided to change the tubes and tires on the AMFlite Falcon this past weekend, and that gave me a chance to see the underside of the bike and its overall condition. There is hardly ANY rust on the underside of either fender! I mean, I could stick them in Evaporust and it'd look like nothing ever happened here! This bike is arguably the nicest one I've ever bought!

Even the underside of the seat looks clean! This bike was really taken care of! 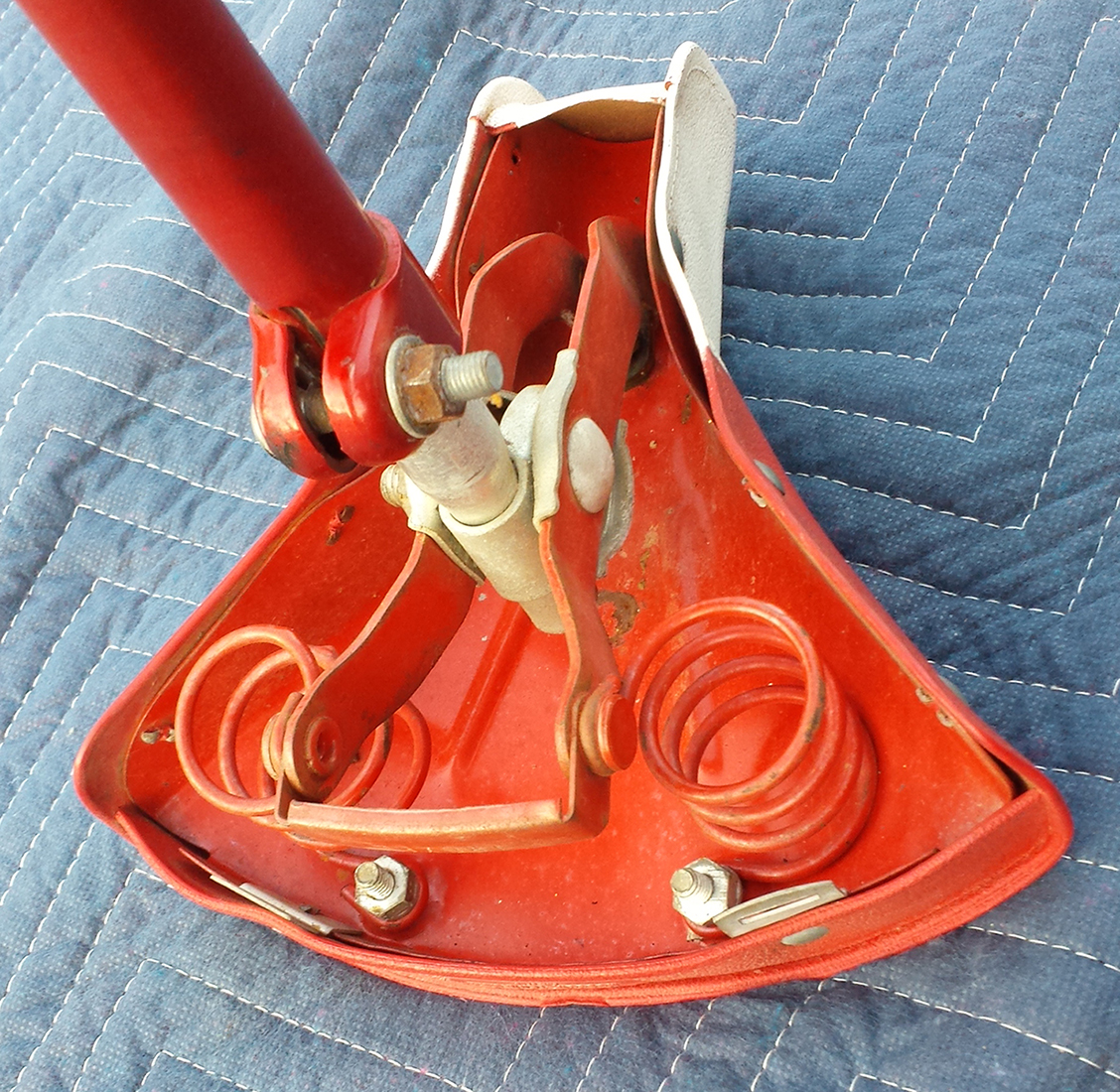 While there is some rust on the underside of the frame, just like with the rest of the bike, it's very minimal, and it just helps to show the bike's age. 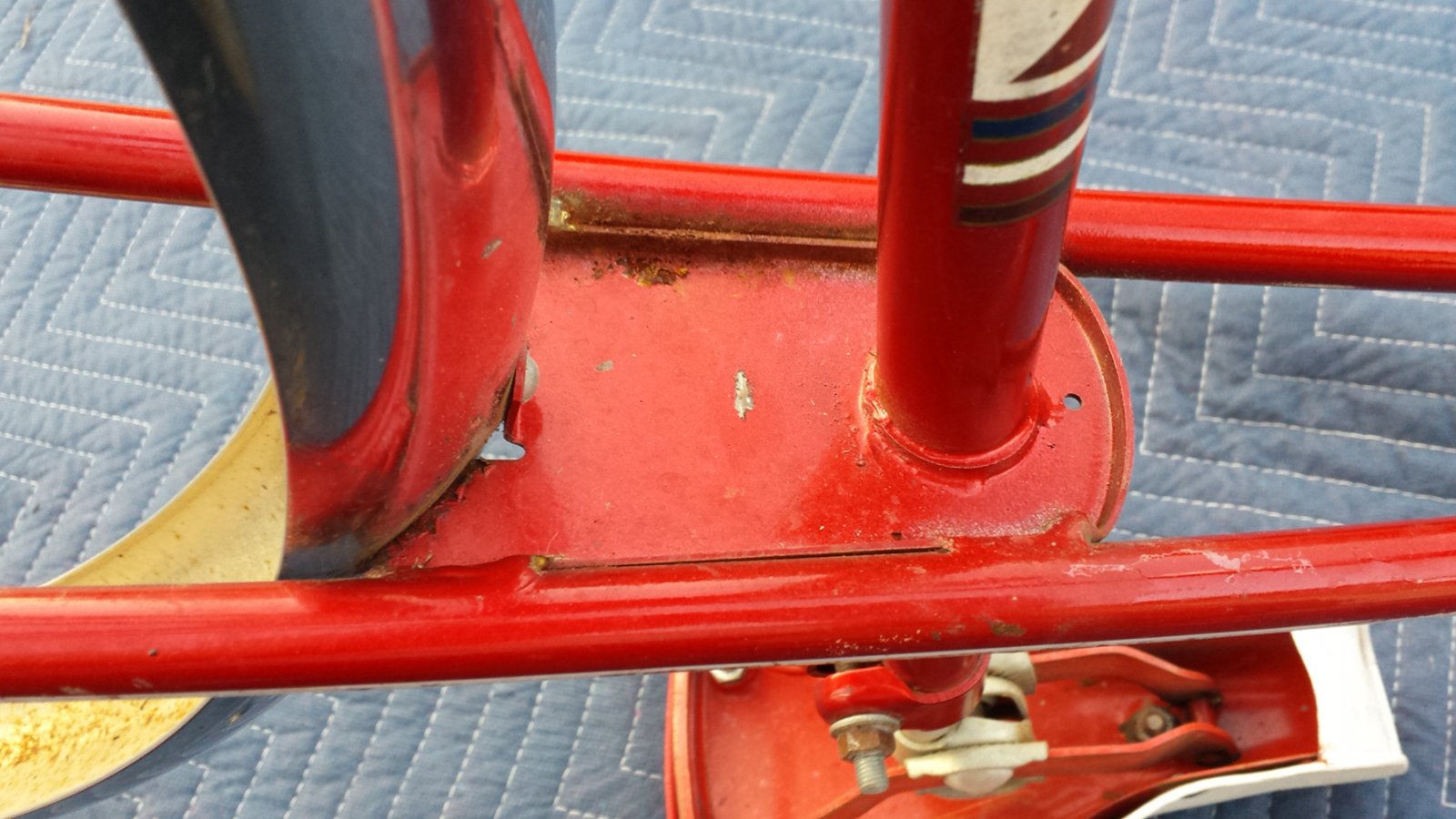 Unfortunately, due to one of the original lock washers, I'm not sure what the serial number ultimately says. I don't know if that's a "K," an "H," or an "R" up front. That might be an "I" that comes after it, though. Does anyone here know how to I.D. AMF bikes?

Here's what the bike looks like with fresh tires and tubes. I used whitewall tires because I already had them. I was saving them for another project, but since progress has been slow on that one, and this one actually rolls, I figured I'd just use those tires on this bike. I've got to say, they really add to the look of the Falcon! So much so, in fact, that I'm not sure I want to turn it into a 26 inch muscle bike now. This bike is really unique as it is, and the whitewalls just make it look nicer than I could have ever anticipated. All this bike really needs to be fully ridable is a coaster brake service, and a more comfortable seat. I'd still like to explore some non-destructive customizations, but this is already an attractive bike as-is. 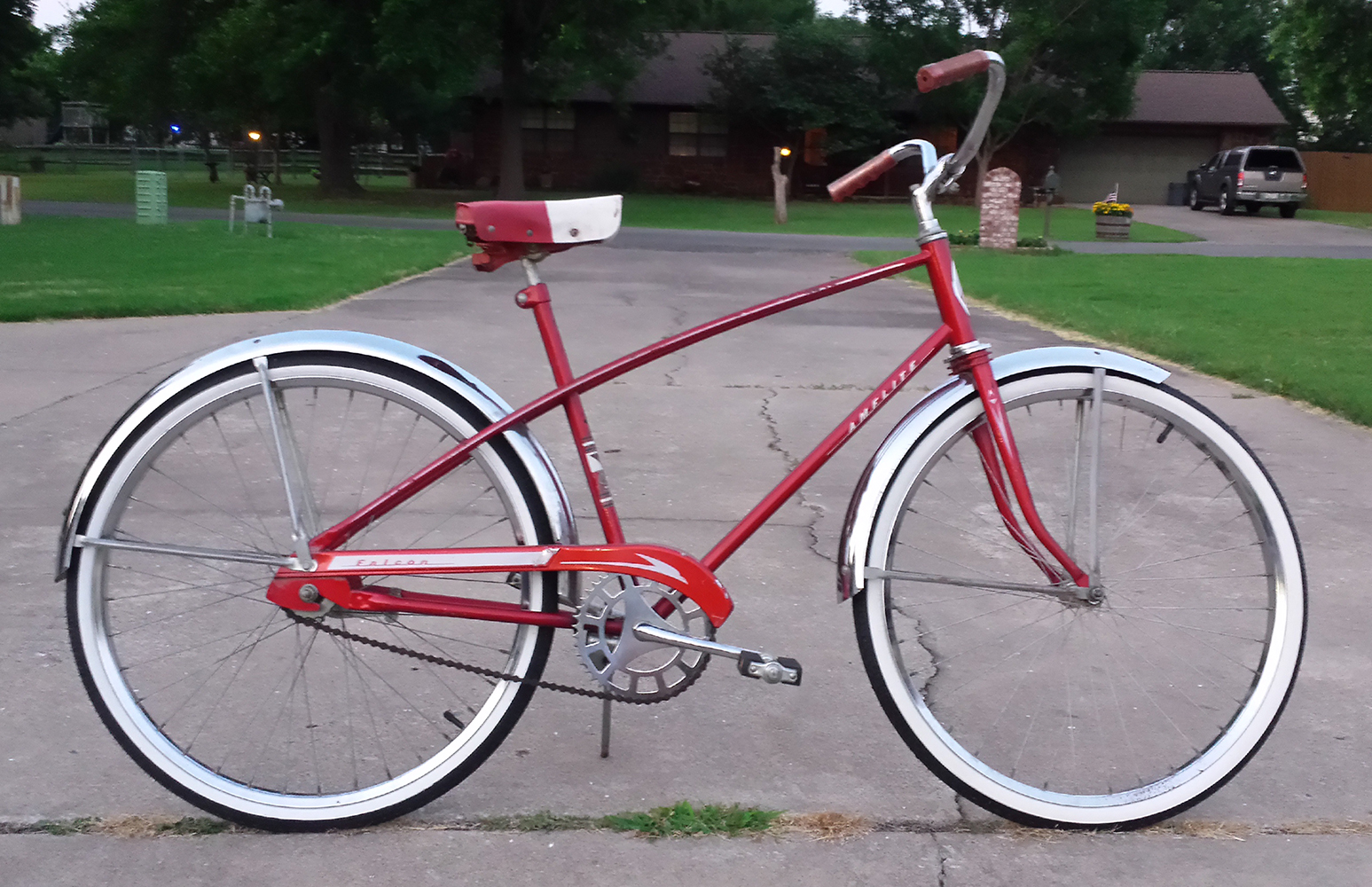 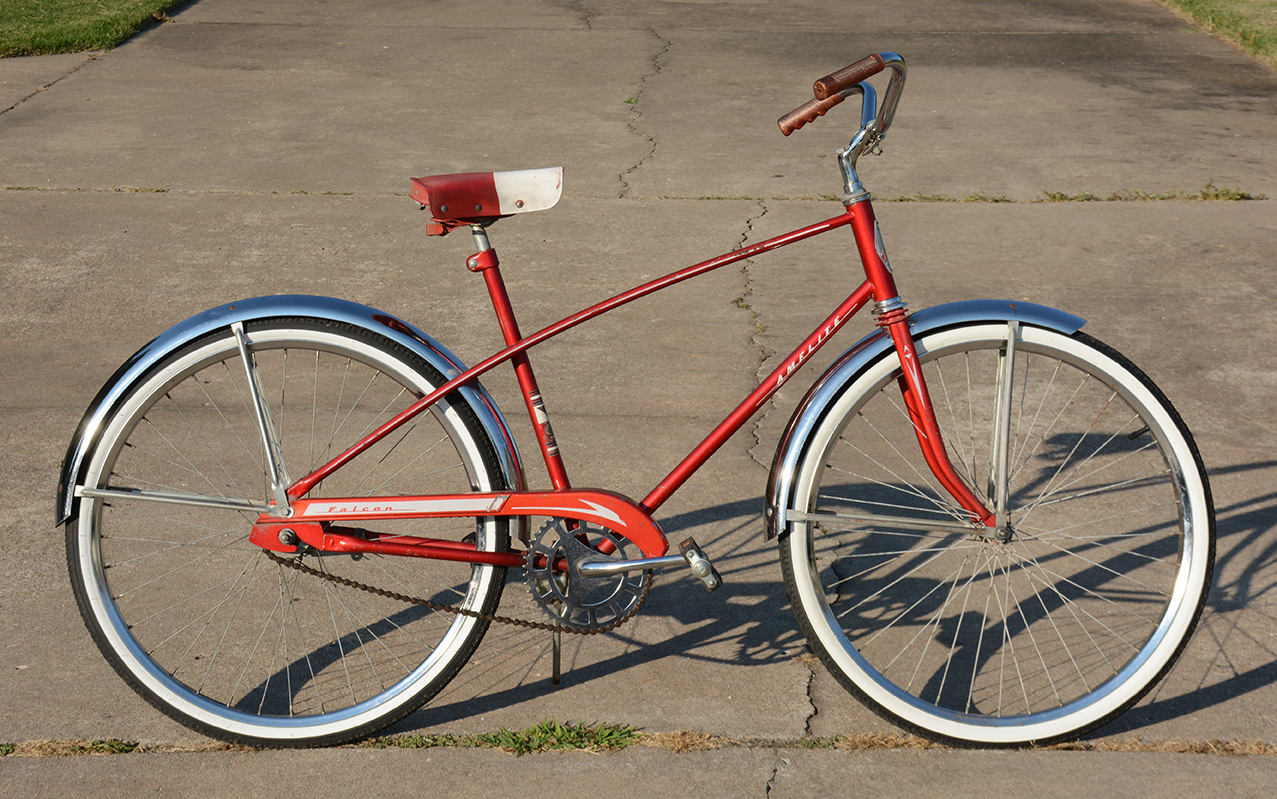 What's really funny is that that family, who usually don't care as much about old bikes as I do, really like this bike. I'll show my parents whatever bikes I'm working on, and they're supportive of my hobby, but I know they're just not into it like I am. But then I brought this home, and put some whitewalls on it, and everyone in my family, even my brother, opted to take it for a spin around the cul-de-sac without hesitation! They've all been quite vocal about how much they like this one bike of mine, and I really like that. So, I might just focus on making this bike into a reliable rider for now, and worry about the modifications later.

That is a really sharp bike, great lines. don't think it needs anything but to be ridden. The WW are a nice touch.
You must log in or register to reply here.

So what's with drop bars being "turned up"?