I am curious about how many are out there.
I know of 11 of them.
If you own or know somebody who has one, please respond.
I don't want their name, just a head count.
The state they live in would be handy so as not to double count.
Thanks!

I have 1, Spokane WA. need 1?..offers this one is the long tank, extends behind the saddle post a couple inches...

Not many, but not many of these either which is surprising not being as deluxe (less on the internet anyway from my research). 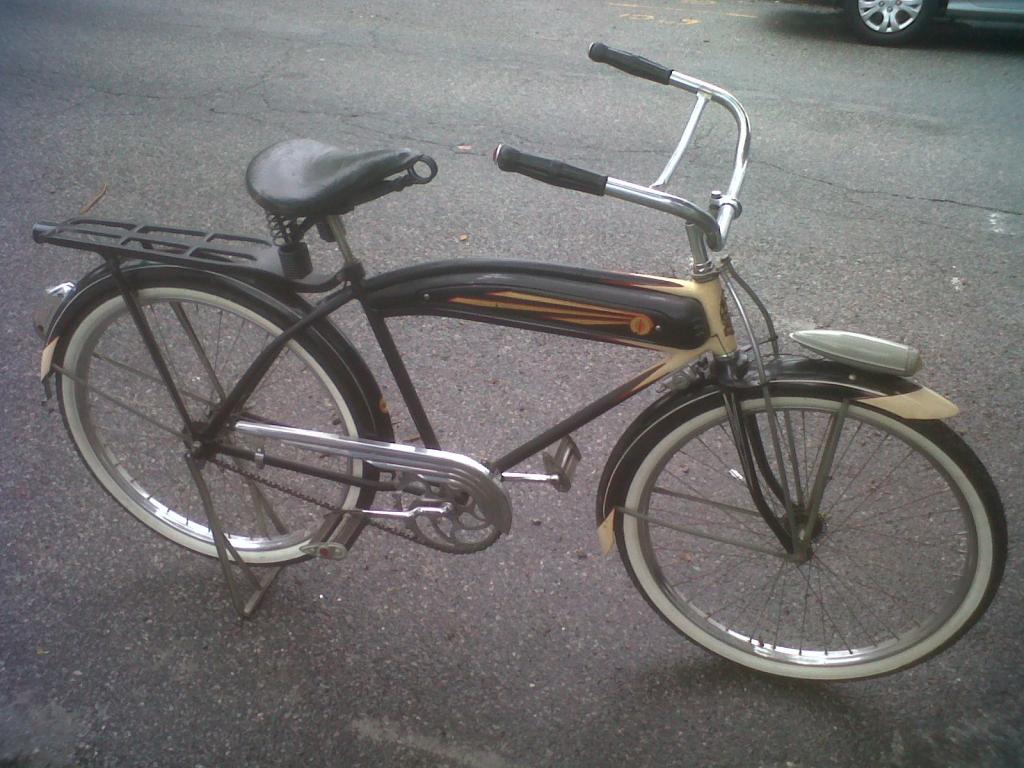 Not deluxe?
They were the top of the line bike for Cleveland Welding.

charnleybob said:
Not deluxe?
They were the top of the line bike for Cleveland Welding.
Click to expand...


I was referring to my most recent pick up (attached) which to my knowledge was not the deluxe top end model...that was the 4-gill.
Just noting that I have found more 4-gills on the internet than the bicycle I posted...for whatever reason, I do not know, as typically there are less deluxe models than standard ones.
Case in point, go to Nostalgic Dave's site and compare the two models, there are zero of mine with the bent tank/hatch, and 4 examples of 4-gills.
Not saying my bicycle is rarer or more desirable than a 4-gill, just in limited observation, less prevalent.
Chris
Last edited: May 9, 2012

Not many, but not many of these either which is surprising not being as deluxe (less on the internet anyway from my research).
View attachment 50993
Chris
Click to expand...


What a beautiful bike!
R

twjensen said:
I have 1, Spokane WA. need 1?..offers this one is the long tank, extends behind the saddle post a couple inches...
Click to expand...


You must be thinking of another manufacturer. The "4-Gill" tank ends at the seat tube as do essentially all boy's CWC tanks from the prewar balloon period. The exception is the 1937 Supreme tank which ended short of the seat tube.
R

scrubbinrims said:
I was referring to my most recent pick up (attached) ..... Case in point, go to Nostalgic Dave's site and compare the two models, there are zero of mine, a handful of 4-gills.
Not saying my bicycle is rarer or more desirable than a 4-gill, just in limited observation, less prevalent.
Chris
Click to expand...


Not to take anything away from the bike pictured here by Scrubbin’; it is in exceptional shape, and rare for that, but it is not a particularly rare bike by model. It is what I refer to as the "Bent Tank" model and it was in production from mid 1936 until early 1942. During that time there were many small changes to the tanks and the frames they fit although they share the same geometry so a 1936 tank will fit on a 1942 bike and vice versa.

While Bent Tanks are hard to find in excellent condition or to a specific original or correct model build (i.e. a complete and correct 1936 version or a full deluxe version such as a 1938 Hawthorne Zep) they are not at all uncommon in more general terms and migrated down the full model line over time from near the top in 1936 to the bottom, offered as a “Special” model between about 1939 and WW2.

Taken as a whole, many Bent Tanks are posted on Nostalgic.net

4-Gills are were certainly produced in much smaller numbers and were only officially listed in the 1939 and 1940 catalogs though they were in production from probably fall of 1938 through early 1941. During that time they were the top-of-the-line “Halo” model for CWC until they were replaced by the “Tall Tank” model for 1941. It is perhaps due to the fact that the model has been coveted for a long in the hobby that it is pictured on the internet disproportionately to the number originally produced or still extant.

As to the current known count in the hobby it would be useful to differentiate a count by tanks and frames as there are more known frames than tanks floating about (The bike was available from the factory as an unequipped, tank-less (No-Gill ?) model) It would also be realistic to separate the 1939/1940 models from the 1938 Roadmaster Supremes which use the same basic tank but use a very different frame. The 1938 Supreme appears to be less common in the hobby than the more desired 1937 Supreme but as the 1937 and 1938 tanks will physically interchange that may be due to 1938 Supremes having been retrofitted with original or reproduction 1937 tanks.

More on all this later….

As you were typing a response, I further edited my previous to qualify the bent tank I was refering to (lacking on the internet) as the version with the hatch door, with the outline stamped on the other side.
Just my opinion, but these earlier bent tanks have a different physical look and paint scheme than later 3-gill bent tanks even though the frame might be the same.
Additionally, the flying V and swan forks associated with these models also set them apart from the later bent tanks (except 1939) and it stands to reason there are less of these (and observed) than later bent tank counterparts as CWC picked up more contracts and increased production from it's beginnings.
This is an extreme example, but a Shelby bannana tank is not the same as a speedline airflow even though they share the same frame and fork.
You're right and I understand the broader classification, but this first generation of bent "hatch tanks" is deserving of its own distinction and historical significance, albeit not 4-gill territory.
Chris
Last edited: May 10, 2012

Apples and oranges.
We are talking about 4 gills.