So I sat through about seven hours of the auction as I waited on a few items I was interested in. I had pre-bid through Hi-Bid on about eight items and by the time the auction started I was already outbid on all but three. Overall there were no "must haves" for me in this auction. This session was really light on quality balloon stuff but the star of the show here was the '39 Zep (Lot 88) that was hammered for $8250. Regardless of which bid service you used that brought the take home price real close to $10k if not above. That has to be a new record for a Zep. A surprise to me was the girls Columbia (Lot 76). No doubt an outstanding, nice, original bike which was hammered for $2500 so about $3000 by the time you get it home. The '37 Dayton Super Streamline (Lot 107) went for $4000. I personally think this bike is bogus and evidently there was enough concern among other collectors to temper the bidding on this one as well. The Clipper (Lot 105) was something of a surprise to me. Not a bad looking restoration but the colors looked off to me but that didn't stop it from hitting $3000 when these usually struggle to get close to that. There wasn't much else balloon wise but I think someone did ok on Lot 477a which was a ratty prewar boys Columbia but it did have a ND 2 speed an a decent looking Seiss or Delta aluminum battery tube for $675.

The auction featured a lot of high end road bikes and it appeared to me that the truly vintage stuff sold pretty good although there were more than a few bargains in their as well such as the R.O. Harrison (Lot 364) which went for $675 which brings me to my one gripe about the auction--my bid button froze two times during the auction and this was one of those times. The other time was on the AMF Gloria (Lot 67) which went for $1200. I was also interested in the Cambio Corsa equipped bikes. The poorly restored Bianchi (Lot 69) went for $1400 which I don't think was a bad price but I already have one. The Gerbi (Lot 275) went for $2400 which by the time you got done with fees I feel was about market correct for a rare and original bike. Some of the newer high end stuff was downright bargains. The one real surprise to me here was the Rene Herse bike (Lot 376) that brought $4250.

The TOC stuff is out of my wheelhouse for the most part but looked like a mix as well. I thought the Apex (Lot 237) was pretty cool as did bidders who took it to $1600. The Columbia All-Brite (Lot 14) went for $4250 which I thought was a good buy. The Star Pony (Lot 38) looked like a nice bike and hit $7000 which I thought may have been a good buy as well. Some of the lesser stuff I thought sold about market if not a little above.

Lastly was parts, ephemera, and ride on toys. I really wasn't interested in too much here. Always a mixed bag when you have lots that have that one item that people really want. Although I like tricycles the ones offered in the auction were mostly restored and I use that word very loosely here as it seems lot of liberties were taken in the transformation of these. Overall I thought they all sold above market but should make nice mancave decorations.

I'm looking forward to the fall sale which, unfortunately, is scheduled the same time as MLC. Gonna be hard to multi-task at Bowling Green in Sep! I'd be interested to hear what some of you think about the online auction and particularly if you experienced problem bidding. V/r Shawn
Last edited: Jun 27, 2021

I too sat through the Copake auction. The items I was bidding on were pretty late in the action,
and I actually did win some of them for the price I had wanted- plus the buyers premium.

What was really eye opening for me was the strike price of the lightweight(road bicycles)
Perhaps it is the shortage of product in the industry or maybe the humble road bike is coming
into vogue.

Whatever the reason, the vast majority of the lightweight offerings went for, what in my estimation,
was top dollar.

After sitting through 4 live auctions at Copake over the years and this along with one other online
version, I can say the live auctions are my preference. With the ability to preview the goods, the
flow of the live auction, the great, social interaction and the side banter of both Seth and Mike as
they work through the lots all add to the event.

And there is also the swap meet in the sheep pen, but that is something for another discussion.

If I can vent a bit, I would like to see a singular online bidding platform. There were 3 platforms
plus the Copake inhouse, pre-bid one. It was difficult to ascertain what early bids were in place
and how they would affect the bidding process. Each platform had its own bids in place before
the event and no central platform that married all the pre bids, some with overlapping amounts.

Copake also listed the auction as having no reserves. The auction platforms instituted "opening bids",
in effect, placing reserves on the goods. That had the effect of driving some prices much higher than
I would have expected of a number of items.

Using both prebid to win 5 auctions and one live bid for the sixth, I did get some of what I
wanted. I also lost a couple due to not having the correct bid increment in place.

I lost a couple live bids because of the inconsistent speed of closing the auction varied
after the "fair warning " icon showed up. Some auctions closed without a warning.

While the auction platforms had nothing to due with this, my computer locked up for a time
and I missed the bidding on 15 or 20 auctions(2 or 3 which I was going to bid on).
Frustrating, but the nature of online bidding.

All said, it went pretty well(and long) and I am generally a happy bidder.

I hope to be at Copake again.

Unfortunately this fall's iteration of the auction and swap overlap with fall Memory Lane.
Glad there is pre bidding in place...............

Pre-bid on 10 or so items. Won One bike and two smalls one of Which is the Torrington ice breaker, A new one to me and a bit of amusing

Thanks for posting results everyone. Anyone see what lot 297a 1941 Rollfast went for ? I wasn't bidding, but picked up an identical bike a while back. 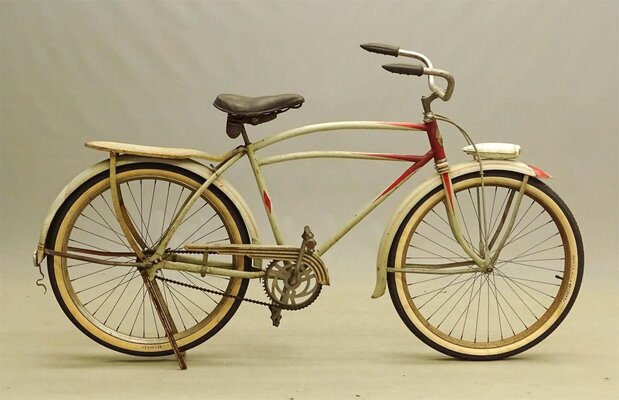 was wondering when someone was going to start a thread on post copake. nothing in the balloons interested me. they did have some nice road bikes. I liked the gloria, and the gerbi which I got neither. Shawn that gerbi had your name on it, I thought you would be the buyer on it. as always I thought there were a few deals, but overall I think most bought strong money. I did end up buying two bikes

Anybody know what the Nebo/New Haven handlebar clock went for? 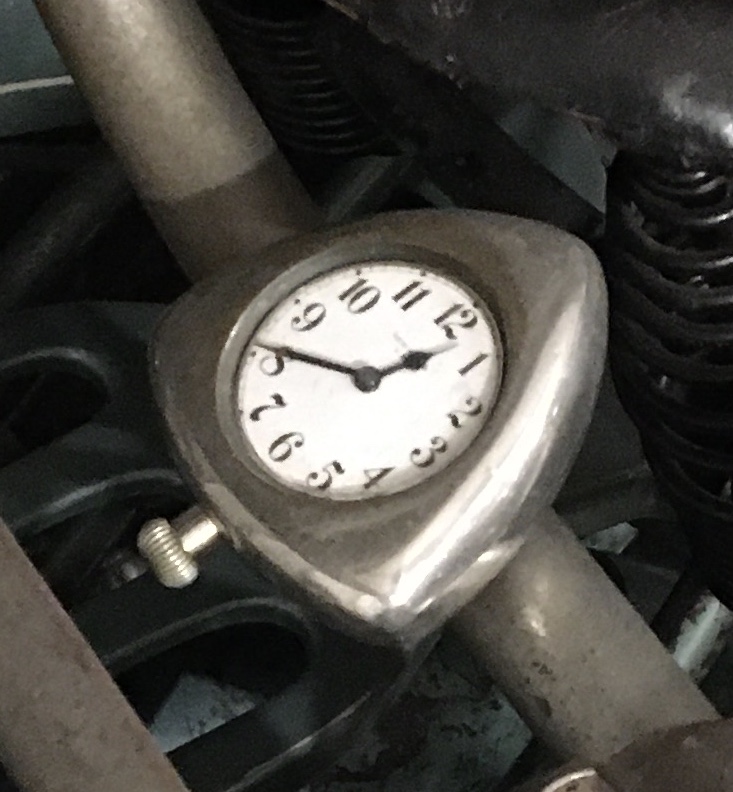 I was watching it but went for way more than I expected. Plus the fee's. 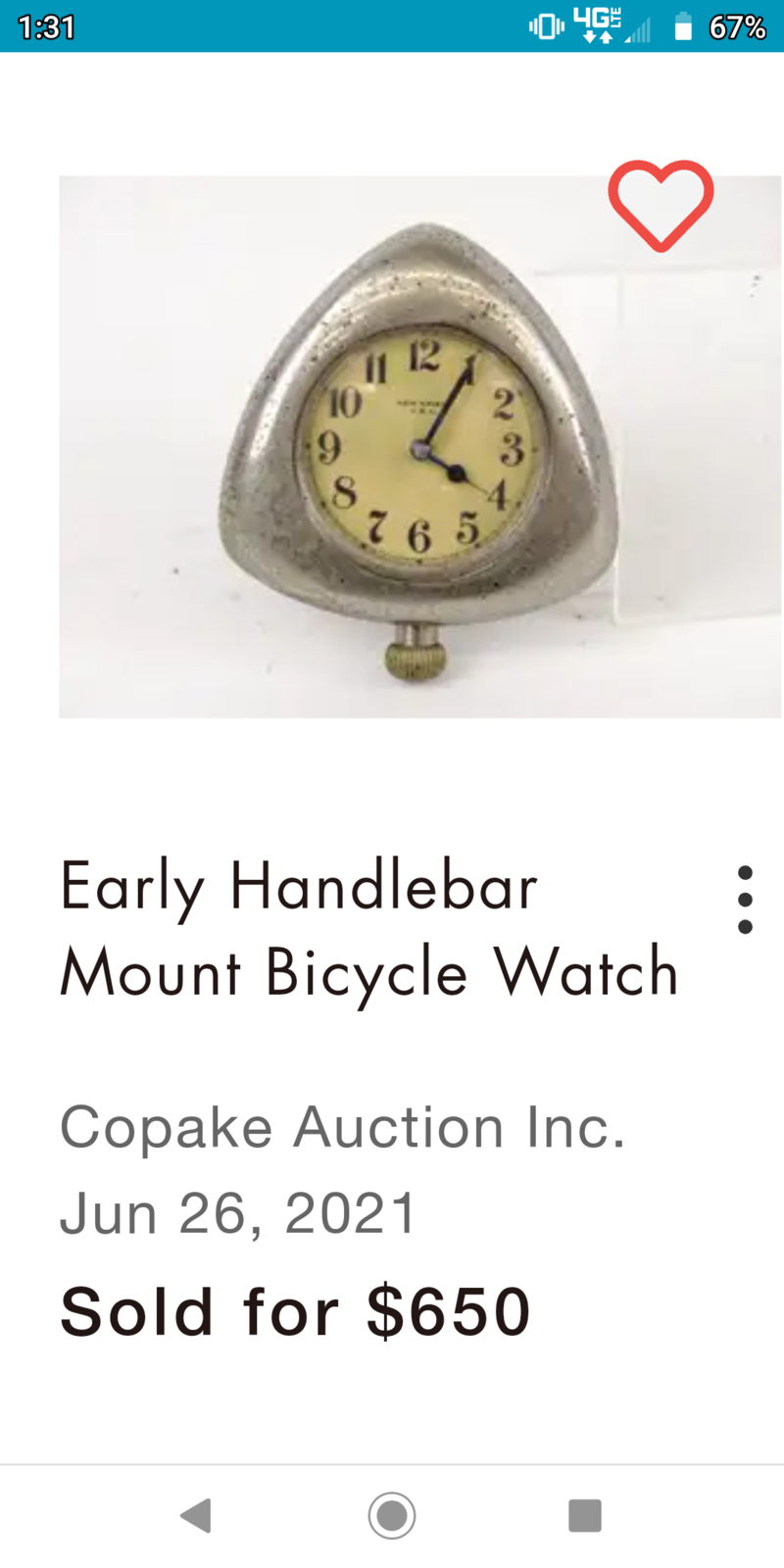 Alright!
Thanks, for the update.
Much appreciated!

I'm with you Shawn, it was pretty lackluster. I picked up something small I needed and something to resell but really wasn't into it at all. I'm ready for next years or another SoCal Benn Swap

this one stumped me :
"C. 1935 Ingo-Bike, MFG. by Ingersoll Division of Borg Warner Co., designed to achieve perpetual motion with it's off set hub rear wheel. Nice restored condition."

IMO, a poor restoration when you closely look at the pictures, sold for : Price Realized: 3,894.00 USD

Who are the bidders? and why aren't they coming to the for sale section on here instead?
You must log in or register to reply here.