I posed this question on the Antique Automobile Club of America forum a number of months ago and never did get a single response...
Does anyone know when the earliest bicycle carrying rack for cars was made? Or, at least, what is the earliest that you have seen?

Searching through period photographs and auto catalogs they don’t really seem to appear until the 1950’s. This interesting 1917 patent drawing turned up on a similar question posed on the Model T Ford Club forum. It’s the earliest that I have come across.
http://www.mtfca.com/discus/messages/708324/751492.html?1493932235
Has anyone seen anything earlier?
I’d be interested in any information you might have - period photographs, period magazine or catalog advertisements, patent drawings.
Thanks,
Ben P. 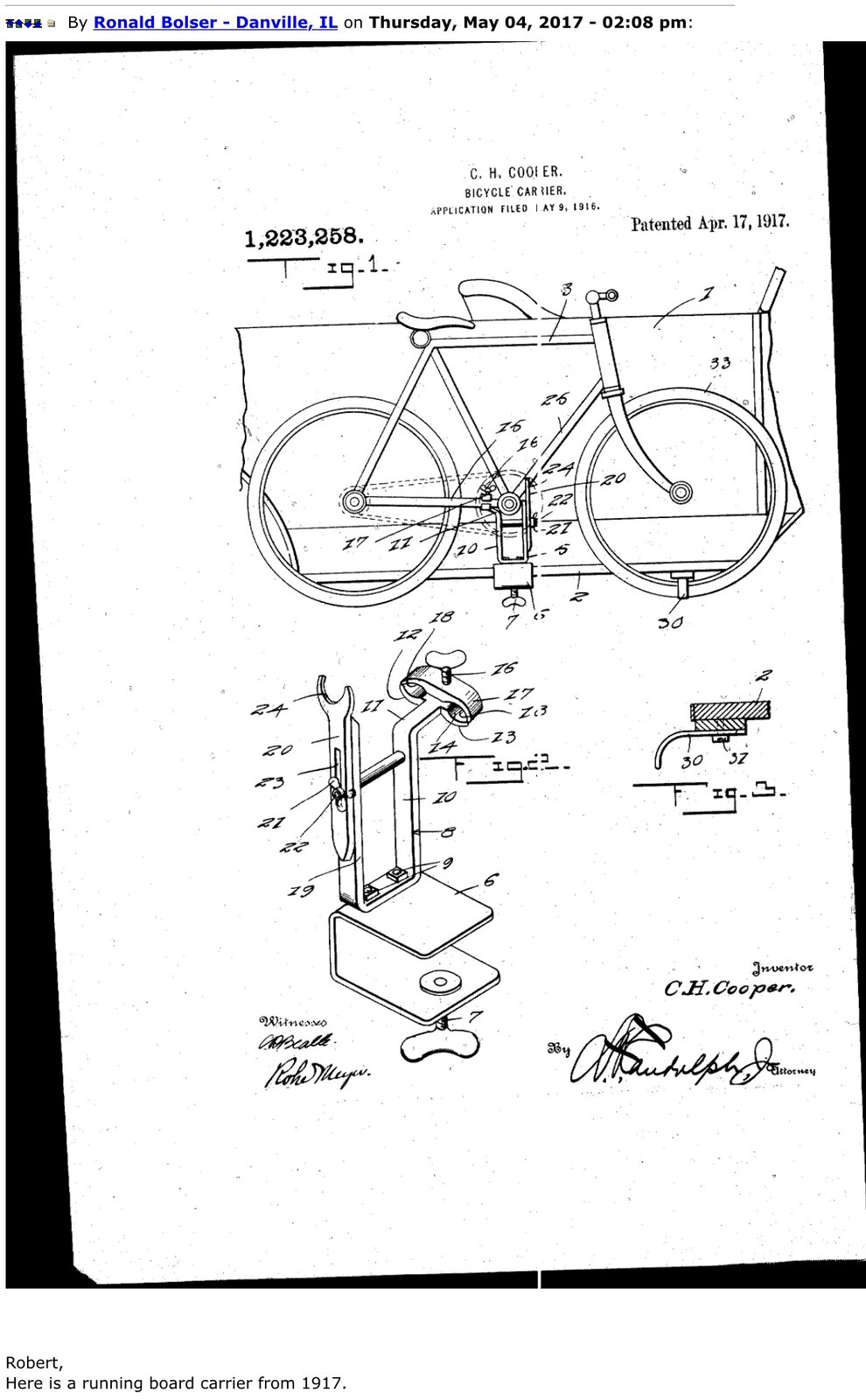 Not sure on the earliest carrier but I thought I’d post this old pic. Pre 18 Dayton motorbike loaded up 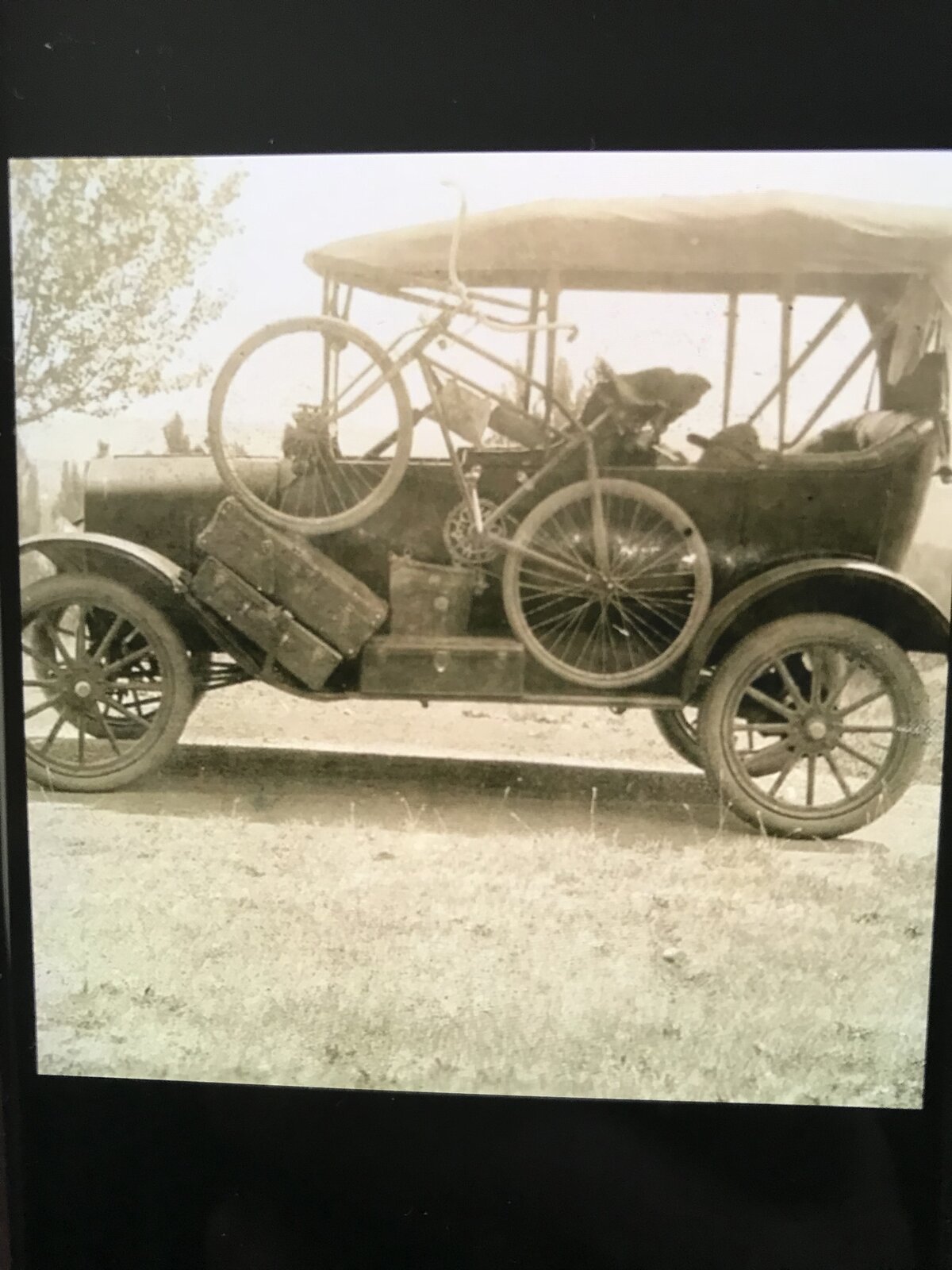 A friend has a 1920's french car that he uses when he brings a 1920's Alcyon bicycle out on rides.
I can't remember if the carrier is period too though.

Normally I do not share photographs of other people’s cars without their permission (just because I don’t like it when I’ve seen photographs of my cars turn up online — always miscaptioned), but I asked the photographer’s permission to use these photos of someone’s incredible 1911 Knox shown this spring at Shelton Ct.
Mounted on the running boards are two sets of brackets for carrying bikes. I have no idea if it’s a period set up, homemade, or what. Looks well done and offers some real stability though.
The 1917 patent illustration I stole from the MTFCA site I’m not so sure would work well on my car. I’m no engineer, but the weight of one bike attached from one point coming down to a small area under a single clamp on the 1/2” wood running board kinda scares the H out of me. I’m pretty sure I’d end up with a cracked running board. The suspensions of pre-1920 cars simply weren’t made for hard-surfaced roads. At somewhere around 10-12 mph the headlamps start to shake, by 20mph the vibration going on is nearly indescribable - but it’s a lot like bouncing down the road inside a steel 55 gallon oil drum. I hit a pothole once with my little car and watched a chunk of paint fly off exposing an old-time repair on a cracked fender I didn’t know about....

That’s a great photograph Goldenindian, probably the best period one I’ve seen. That’s usually how I’ve seen bikes attached to pre-war cars. Not on a purpose built carrier but lashed somehow on the running board or side of the car. 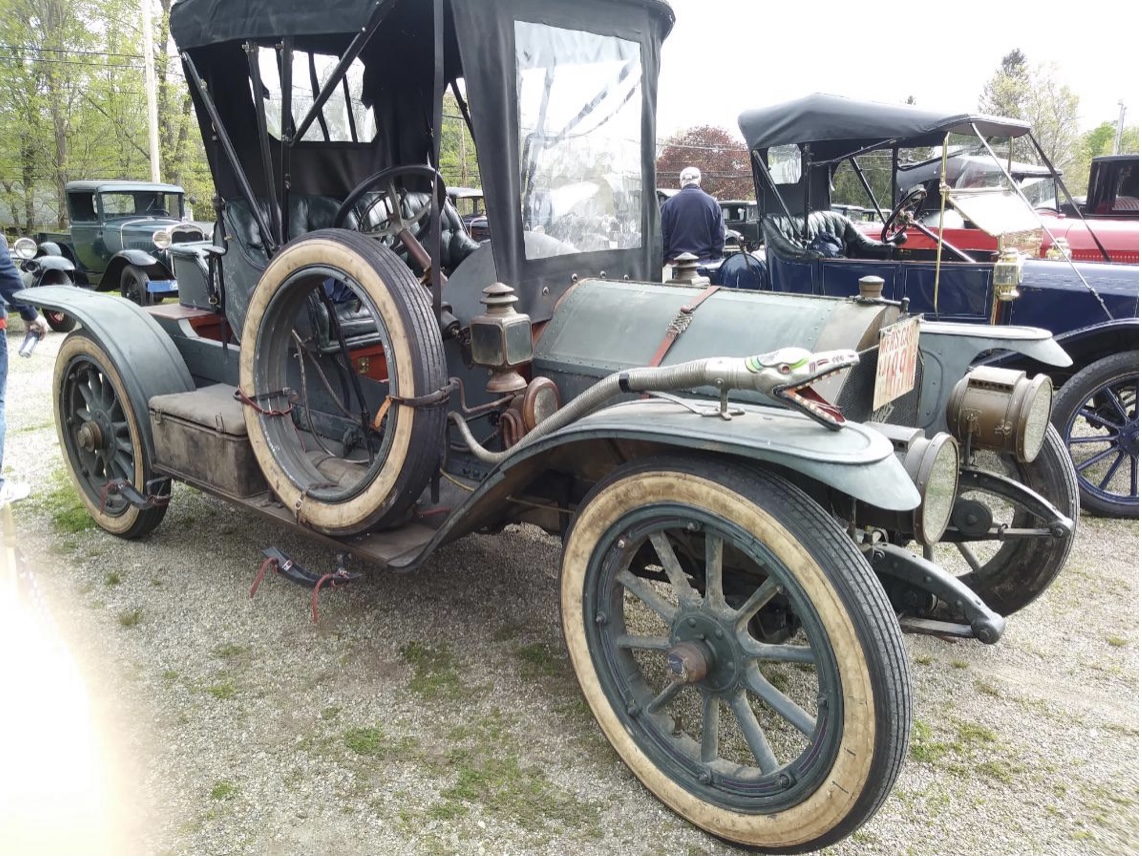 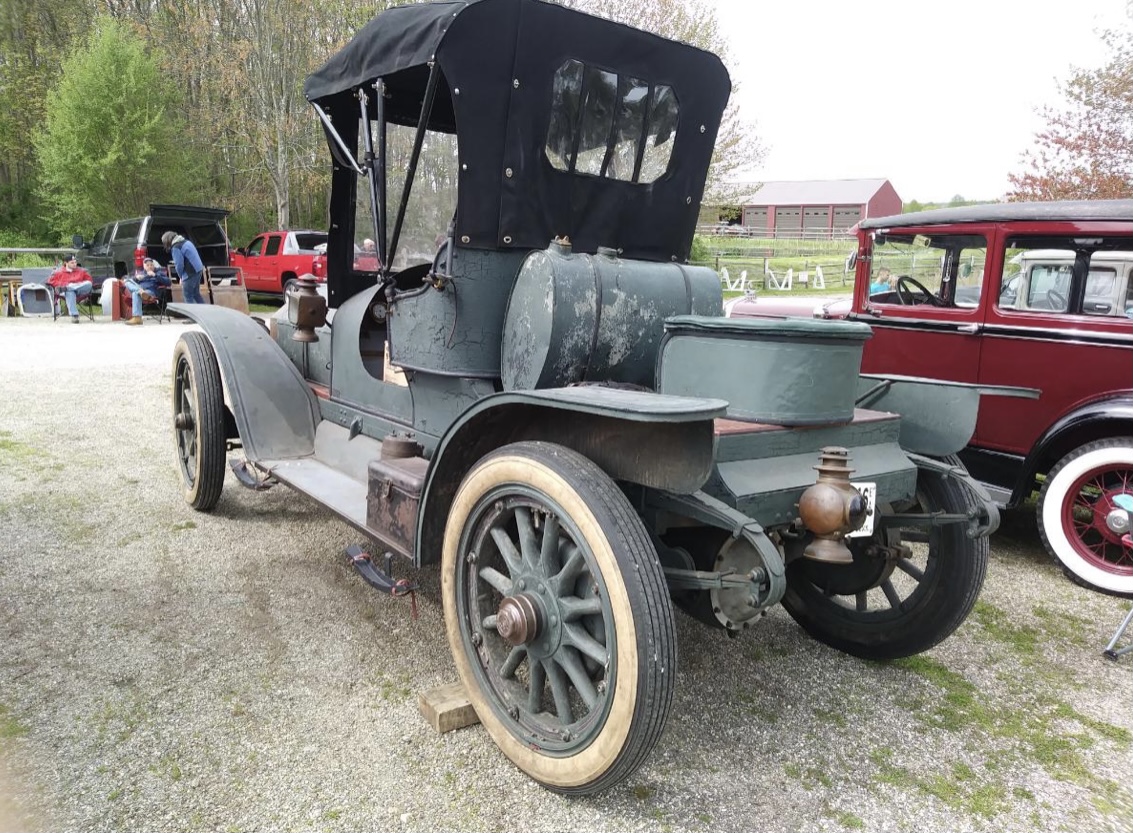 I thought you might like to see this.
And the catalogue illustrating it is from 1914.
While not a bicycle rack, it may well be the earliest portable bicycle, actually designed to sit on the running board of a car, from 'Hirondelle' of France...... 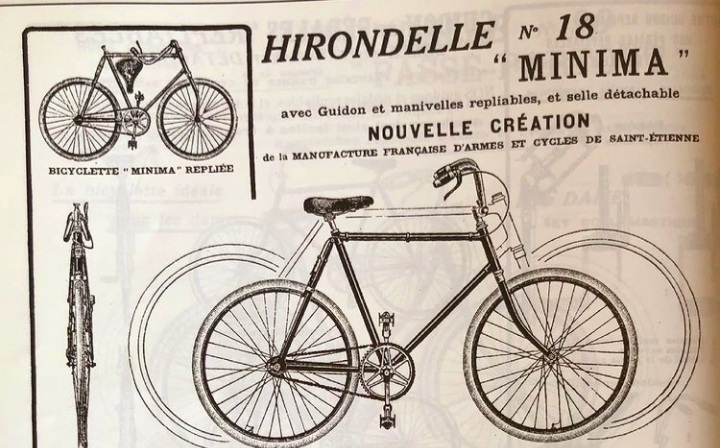 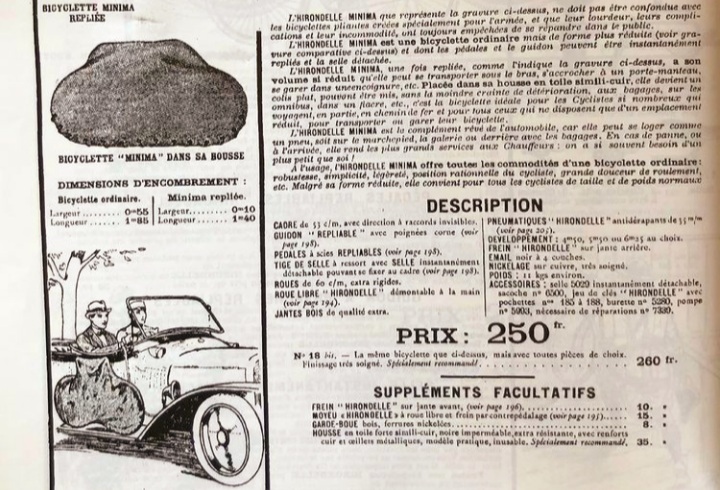 And here is a surviving example owned by Marc LeBreton, owner of 'Le Musee de Marco' in northern France ..... 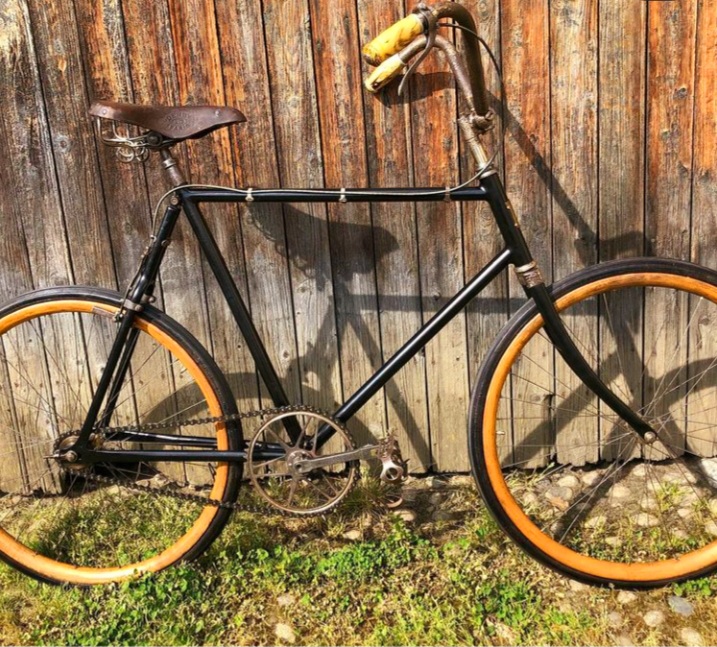 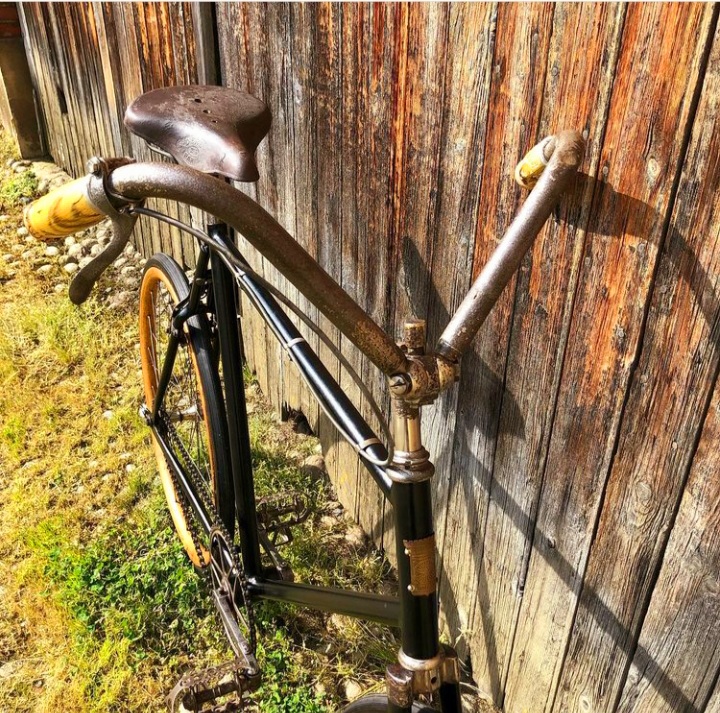 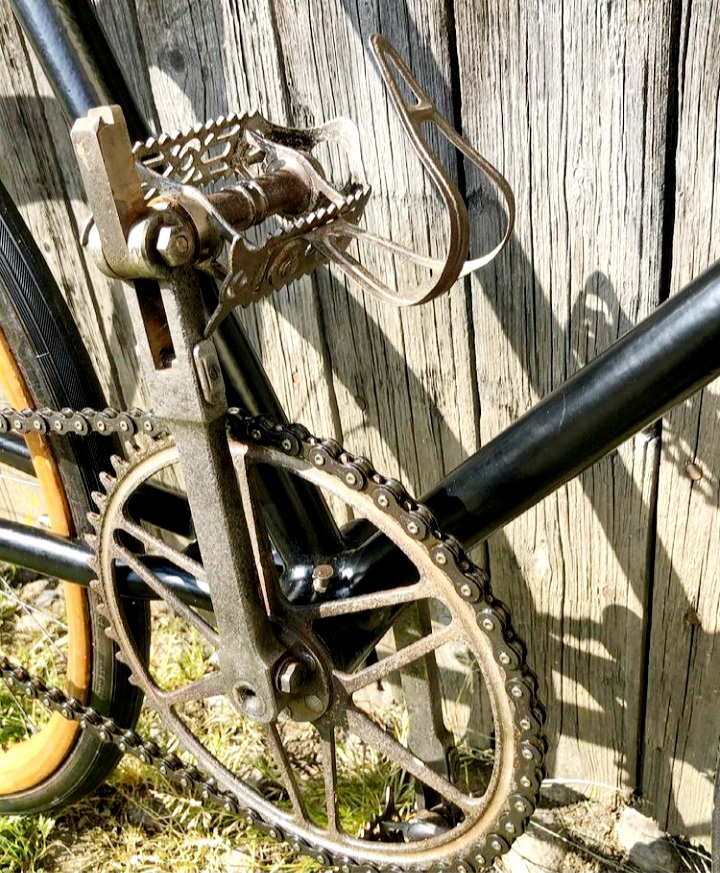 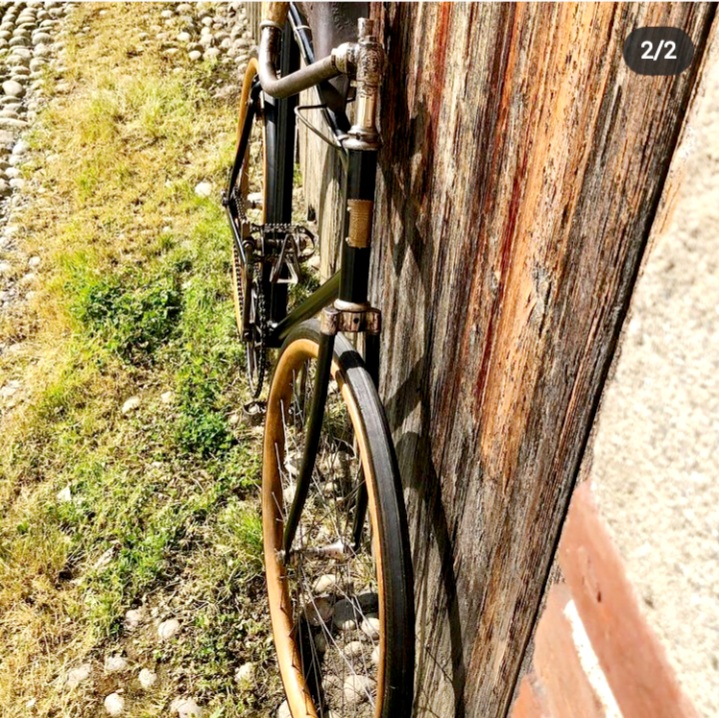 As you can see, it has folding handlebars and pedals to make it very compact.

WOW, that is incredible.
You must log in or register to reply here.