GTs58 said:
I've seen a couple of the early S-2 rims that were smooth on the outside but had the knurling on the inside. Did the smooth tubular S-6's have markings on the inside?

Here's a stainless S-6 that does have some knurling. Owner says it's a 1946 but has the later graphics and components as the 47 models.

Just picked up a 1946 Schwinn Continental, once I had it on my stand realized it has stainless steel rims. I have never heard of or seen this before. There is no question they are the original rims either, the bike is complete and untouched. The rims of course are almost perfect. They are made...

Interesting! Thanks for the link! 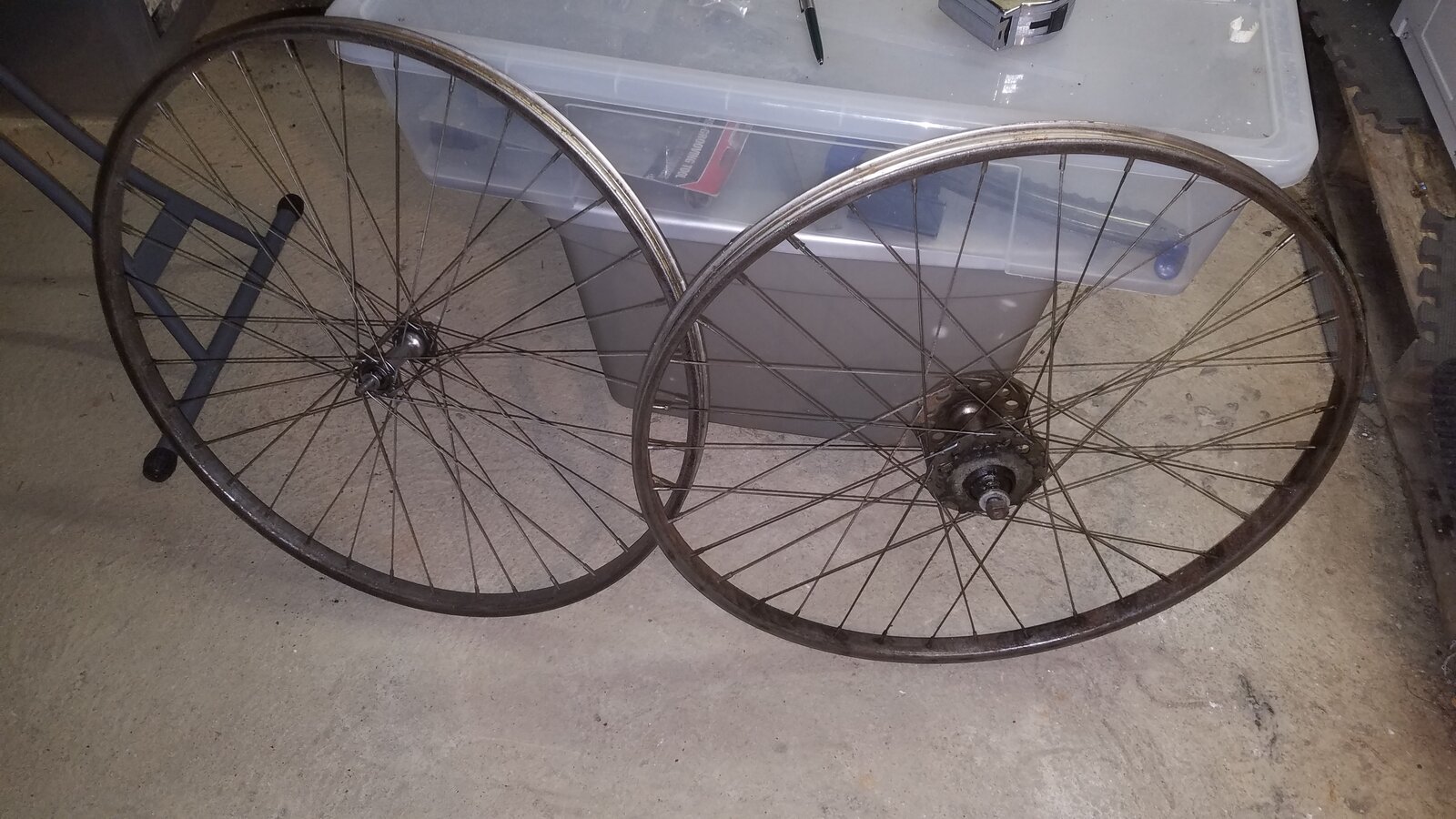 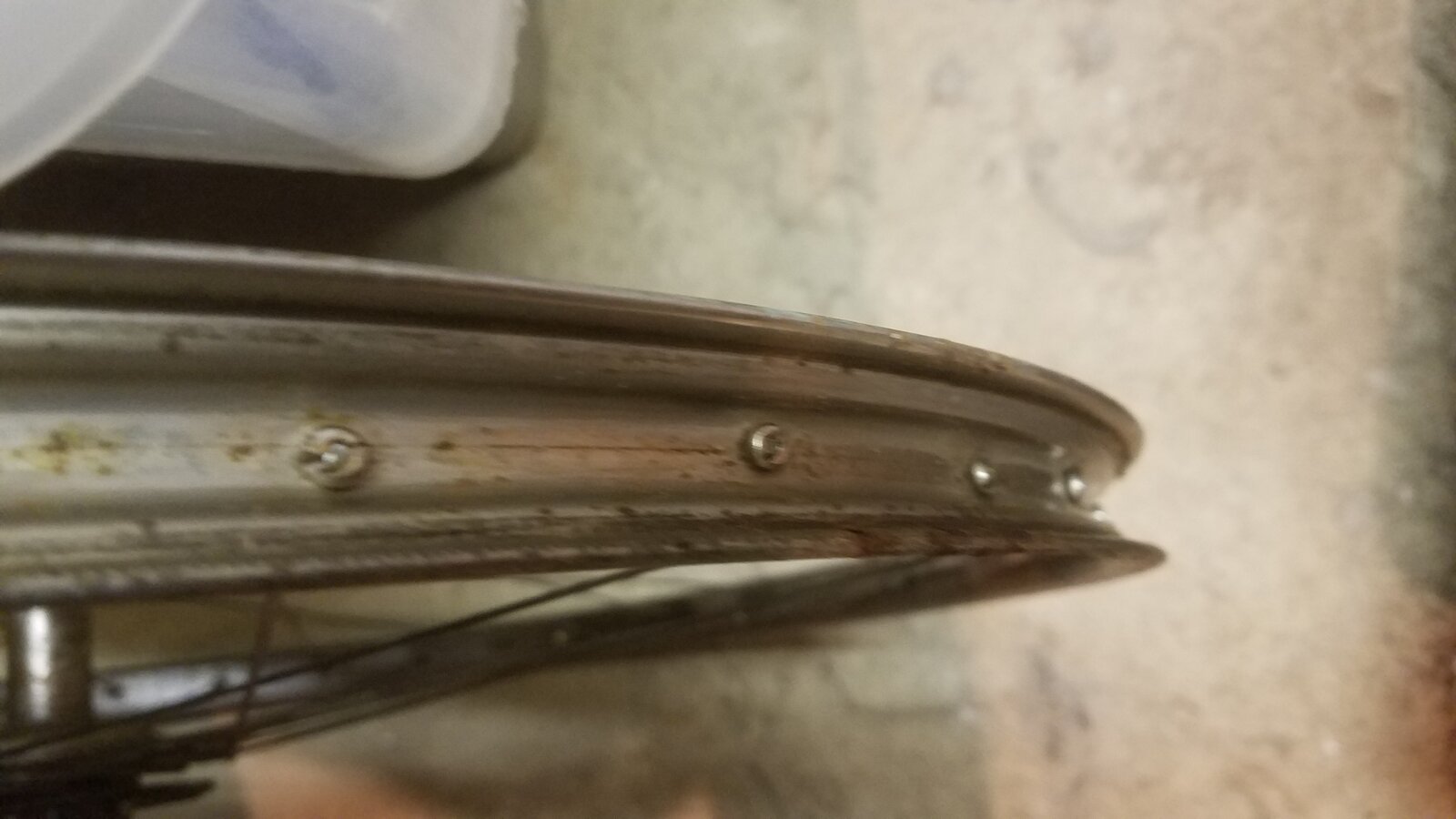 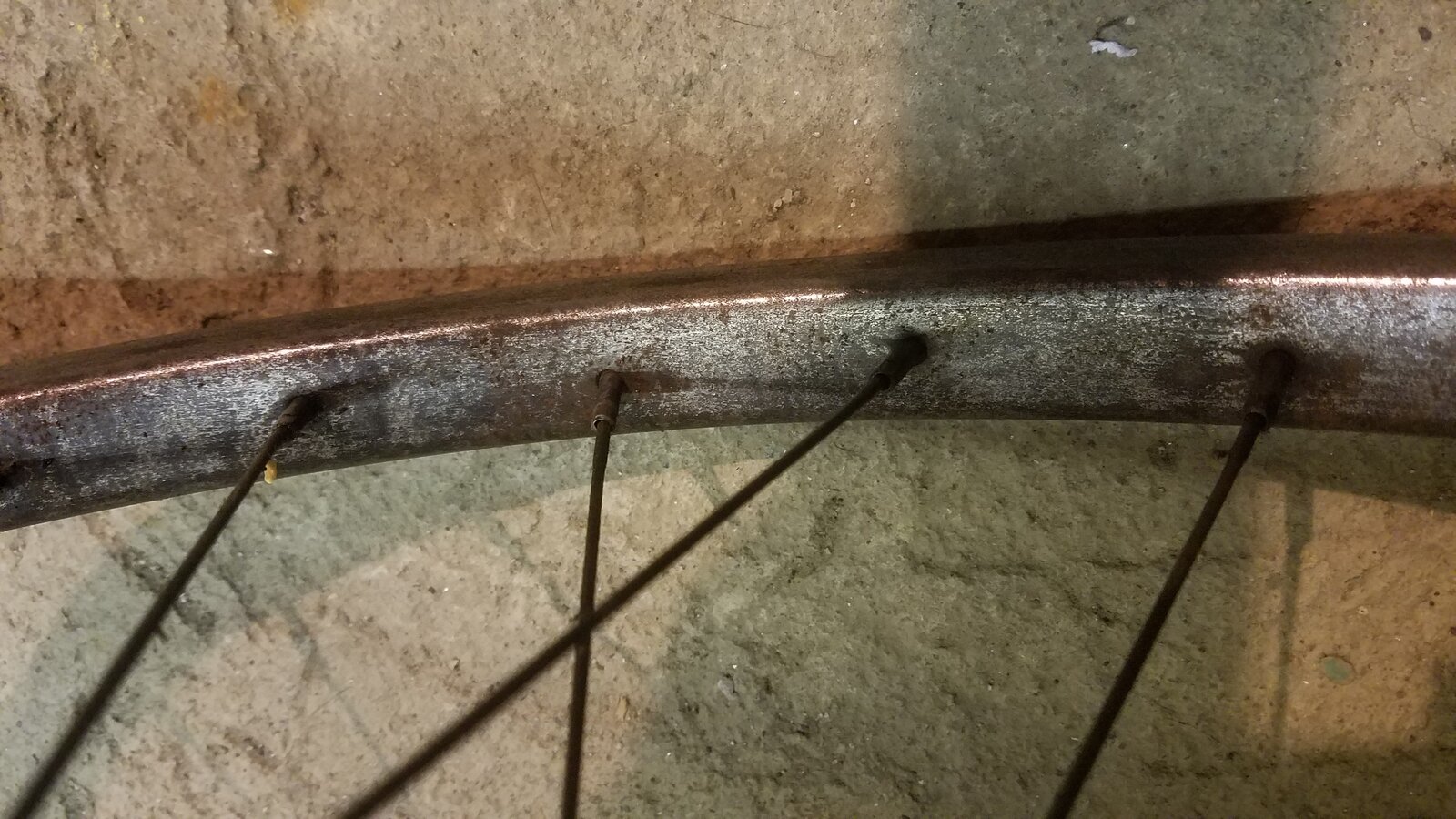 You're right, the inside is a different profile than the outside so it's tubular construction, and the offset on the spoke holes looks right, so that's got to be an early S-6. It looks like they almost had to move the holes towards center to clear the shoulders inside the rim, and I'm guessing the shoulders are for the beads of the (straight sided?) tires. And it sure doesn't look like there's any knurling, any sign of a stamp?
And it sounds like you would expect the Continental to originally have the better, stainless rims, so mine are probably replacements. Looking at your rims, that looks more likely to me, too. Thanks for posting!
Last edited: Aug 18, 2021

I do think the ladder knurl rims you have are replacements. One would expect Stainless S6 rims on a late 1940s Continental, but I suppose someone could order chrome S6 rims instead of stainless if they really wanted to. It would go against the upscale nature of the Continental to then downgrade to chrome steel rims. The wheelset is one place where you don't want to do your cost-cutting if you're trying to squeeze a little extra performance out of a bike. But if someone beats up the rims and you need replacements, you might opt for the more common S6 for a repair.

Did you ever check over the frame for more evidence of damage? Even if you have mild front end damage, there is one more chance for the frame: the Park HTS tool. The HTS married what is basically a bumper jack to a metal bar on an angle. The bar and clamps would be fitted through the headtube, and then the bumper jack portion of the tool would go against the bottom bracket shell. The screw of the jack was then turned, pushing the bar outward and straightening the frame, effectively cancelling out whatever front end bend was there. If the rest of the frame is clean, I'd be inclined to look for someone with the HTS tool or equivalent (one could make the HTS if talented enough) and try to fix it. The HTS won't work on severe damage, but if it's mild, I'd actually try to straighten the frame with the proper tool.

The HTS-1 is designed to quickly correct the angle of head tubes. Tremendous leverage is generated with this tool, straightening frames with little physical effort.

When you sight down the frame tubes, it actually looks pretty straight. My first impression was that the rims were replaced and the frame had already been straightened. I think I see a slight bow in the top tube, although it could possibly be uneven brazing where the tubes are joined, it's hard to tell. But you might be able to see in this picture, both top and down tubes have the stress cracks in the paint. On the other hand, the fork looks straight as an arrow.
The rims have no stamping, like some I've seen from the '70's, and if one got damaged in an accident, finding stainless rims would have been next to impossible by then. The only thing that made me wonder is why you would replace both, but maybe both were damaged.
The bike doesn't look in bad shape, I just wish I had noticed that paint before I bought it. Oh well. 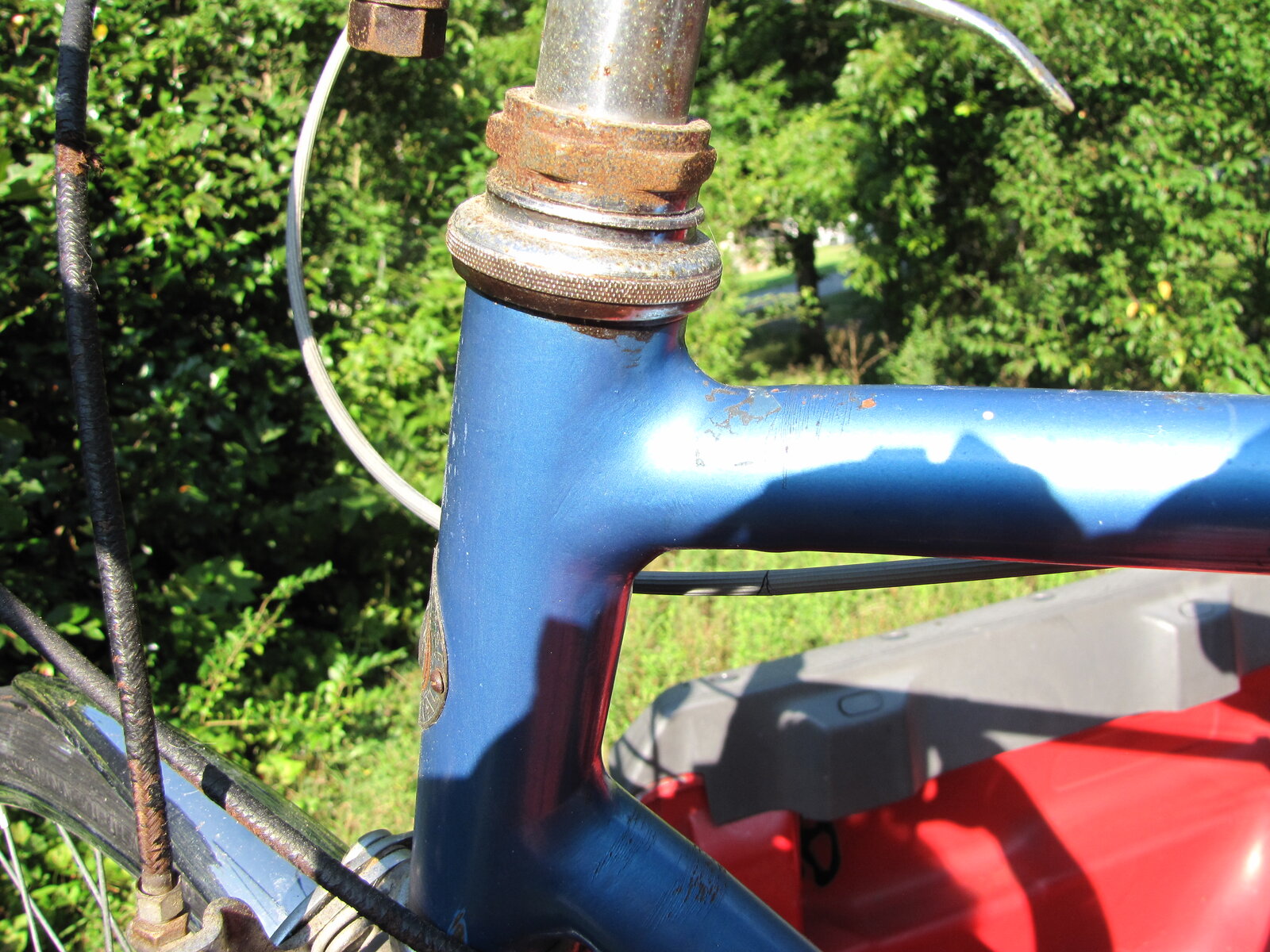 Ah, I see what you mean. That's front end damage. Both the top and down tube have some bending. I would also be concerned about what appears ot be a buckle in the bottom surface of the top tube. Those braze joints were solid enough that they held while the tubs behind them bent.

Has anyone seen the specs stating the Continentals standard issue rims were stainless? I haven't come across any that state stainless. If they were standard issue, wouldn't the Clubman use them? 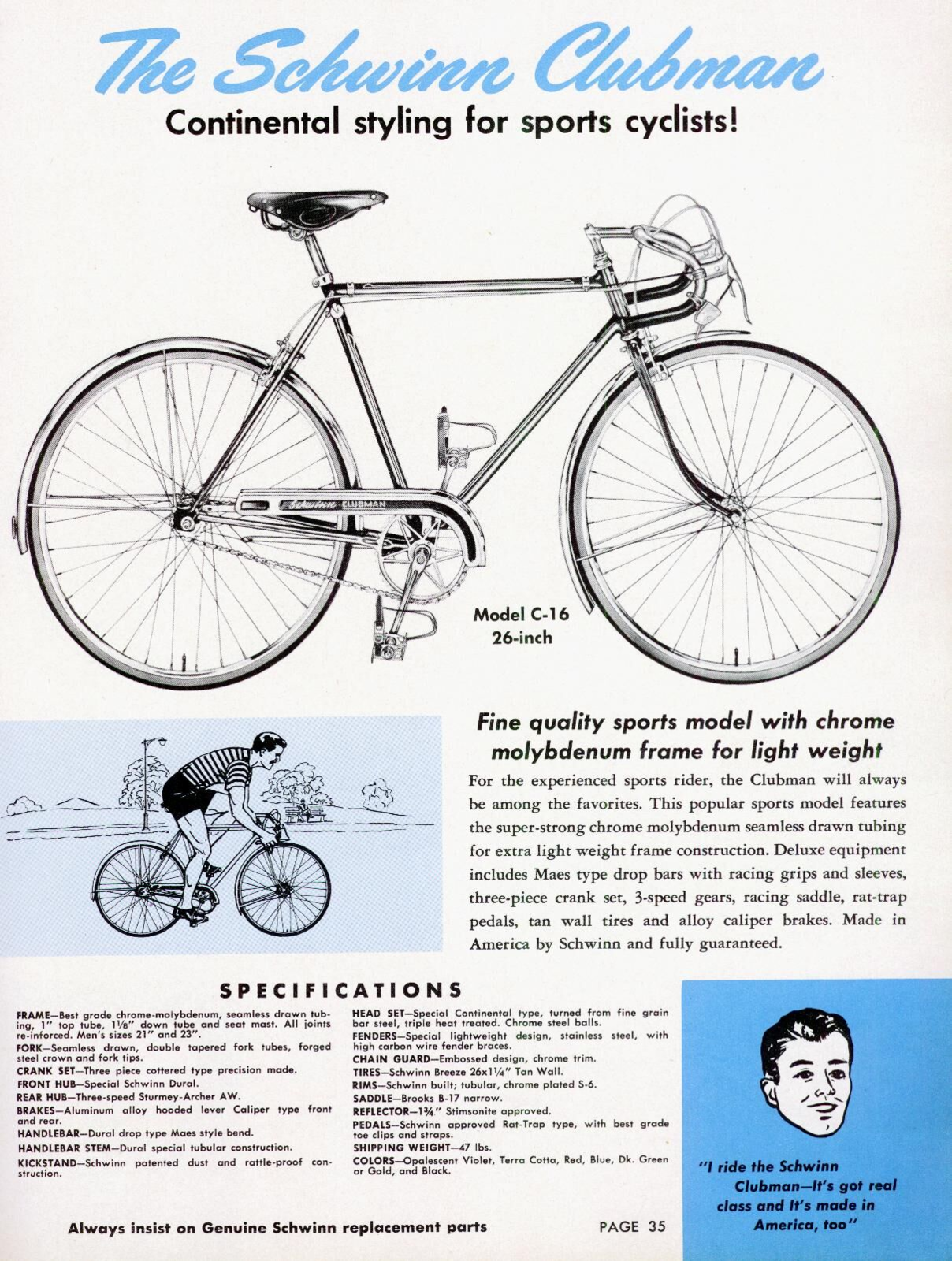 SirMike1983 said:
Ah, I see what you mean. That's front end damage. Both the top and down tube have some bending. I would also be concerned about what appears ot be a buckle in the bottom surface of the top tube. Those braze joints were solid enough that they held while the tubs behind them bent.
Click to expand...

That bulge worried me too, but as far as I can tell it's a blob of paint or brazing that ran down and hardened under the tube. Until I can find a better one, this one will do for a rider.

GTs58 said:
Has anyone seen the specs stating the Continentals standard issue rims were stainless? I haven't come across any that state stainless. If they were standard issue, wouldn't the Clubman use them?

Schwinn never failed to advertise stainless fenders, so I can only guess that the stainless rims were only made for a short time and I just haven't seen an ad from the right period. But the 1948 catalog on bikehistory.org puzzles me. That seems to be just when the stainless rims turn up, and the balloon tire models are all specified as having S-2's either chrome plated or painted, but I can't find any description of the material or finish for the S-6. I believe the S-2 was a new introduction for 1948, so maybe they got the spotlight, but why would Schwinn make stainless rims and not advertise it? There's got to be something out there somewhere.

The stainless rims are more likely correct by simply an odds basis, but you can never say "never" with these. I'd just go with what you have. The chrome S6 is a good rim usually. My guess would be probably replacements, just based on the odds, but it's hard to conclusively say they are wrong as well. We always find exceptions turning up. They're ballpark for the bike. If they were 1970s Rigidas or the like, then it's way off, for example.

I like the catalogs, but puffery sometimes clouds it. They give guidance but we keep finding exceptions to the basic rules. Yeah, you'd think it would mention "stainless" among all that. But who knows what is or is not true sometimes with the catalogs. For example, page 16 would have you believe it was the Continental and not the Superior that was the mid-range bike starting in 1938. It also would mislead one into thinking that "high grade" adult bicycles were not made between something like 1900 and 1938 in the US, when we know today that some very good bicycles were built for adults in the courier, delivery, and military service fields by several companies (who wouldn't want a nice WW1 Columbia military model in their collection today?). I recall seeing an ad talking about how the New World had front-facing dropouts starting in 1938. The New World serial number chart and study here at the CABE shows it's probably more like 1940. It's puffery on some level or another - selling bikes rather than running a documentary for Schwinn.

I have a post-war Superior with a "T" series serial number. One would think T is a tandem by the basic rule, but I guess the Superiors and Tandems were drawing from the same bin of bottom bracket shells in 1949 or 50. I know of at least one other post-war Superior with a "T" series number, but I wouldn't be surprised if other numbers existed.
You must log in or register to reply here.

M
Cool stuff for the Man Cave, She Shed, Retro Kitchen or Apartment