Free! Nude Photos of The Devil 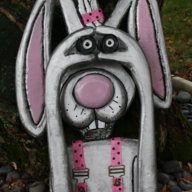 Free! Nude Pictures Of The Devil Reprint From Whizzer Newsletter

By Al Blum and Ray Spangler

It was a titanic struggle to resuscitate the wicked “red-man”, especially his giggly parts. First the facts: The bike is a 1951 Schwinn with an H engine kit. Almost all parts hanging off of his dirty carcass were as original as the paint, except the license plate holder which serves as a stately perch for my red-eyed, “Prince of Darkness” ornament. The bike has a less-than-effective rear, hand-operated brake that the Whizzer company warned against using. The only way to increase the braking effectiveness is to add a front brake, which would require the use of both hands. This would leave you with (only) your third hand (lips) to operate the clutch. To prevent the rear wheel from falling off, the two stand nuts had to be handmade (by Al) out of hex stock since the brake threads are metric and shouldn’t be used with a Whizzer stand. The hub is larger than a regular rear hub, so the sheave holes and the spokes do not line up. They needed Al’s modified washers to prevent the sheave from loosening up and jamming between the rear wheel and the frame.
The bike had fallen victim to the typical glitches that prevented it from starting. After its demons were exorcised, corralled and pummeled with a mushroomed brass hammer, a mighty, barking, roar erupted from the bowels of Lucifer’s massive single cylinder. A fifty-year silence was shattered. Al, soaked in honest sweat, yelled, “You even have a milky-faced speedometer to tell you how fast you are going as you careen through the weeds on your way to smashing into a tree!*
This particular Whizzer was acquired by Chuck Gatto and the late Bob Baker
during the early years of Whizzer restoration when the two of them “WERE” the Whizzer Club. They split the lucrative and legendary, “Milwaukee Whizzer Lot”, by Chuck taking three complete bikes while Bob loaded up a ton of other, rare parts that are now in our bikes. Chuck sold the two normal Whizzers: a Pacemaker and a Special, but he knew that his third (this little red fiend) was too dangerous to ride. He left it in his shed for nearly half a century. Do you know how long that time is when counted in dog years? (350) The scarlet delinquent is presently running very strong but it is still exceedingly dangerous. At least, it is out of the hands of children who are not Geezers.
Does every Whizzer have to be built to be a wimp-safe rider bike? Ask the gentle creatures who inhabit our hearth and home. They will reply, “Villains despair; mighty warriors swagger here and ride the ferocious, steel steeds of champions, without trembling in fear”.**

*Paraphrased for the ears of children.
**My titillating and sultry, high-born lady has lovingly provided (for me) a thesaurus.

Editor’s note: Should she take it away from him? 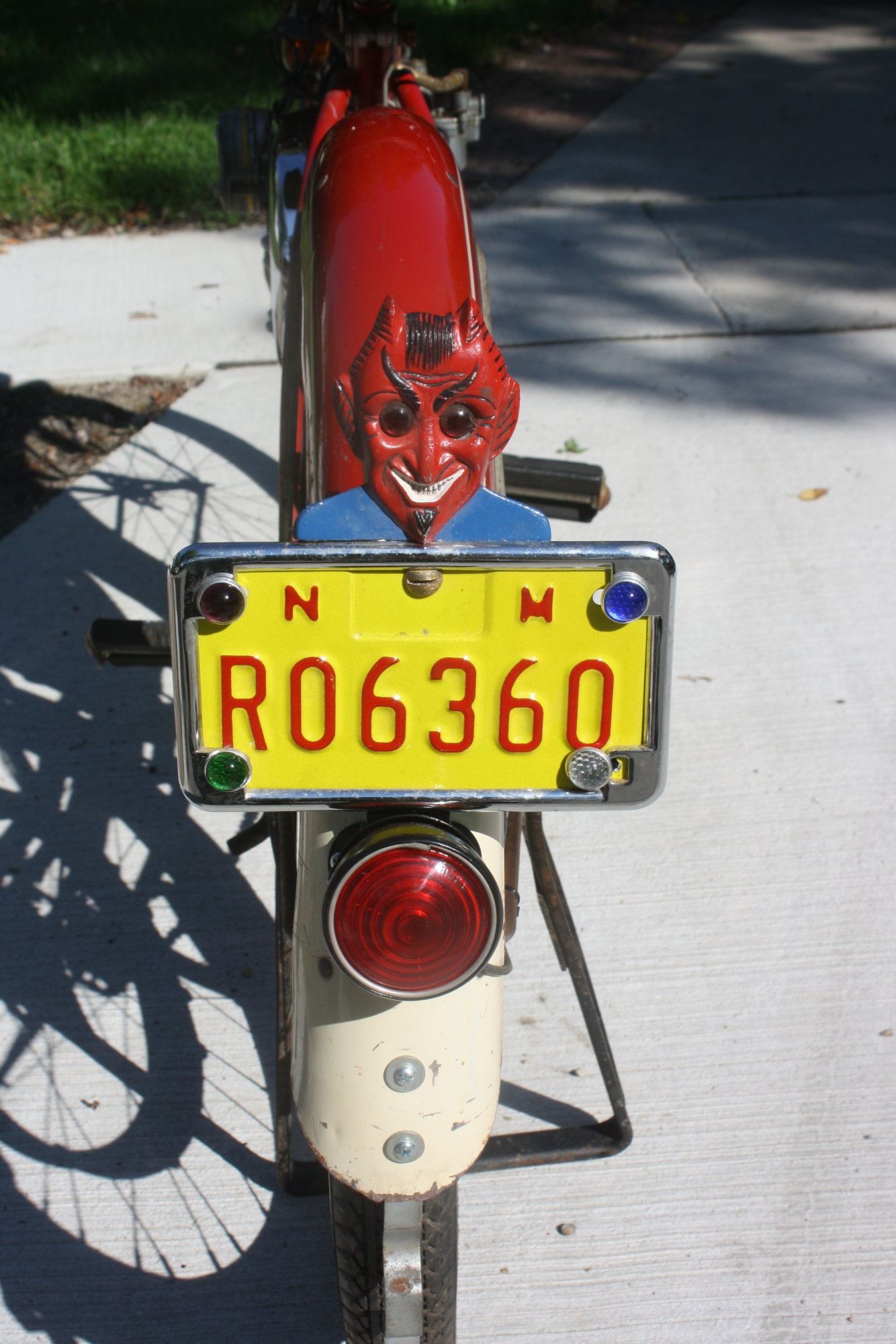 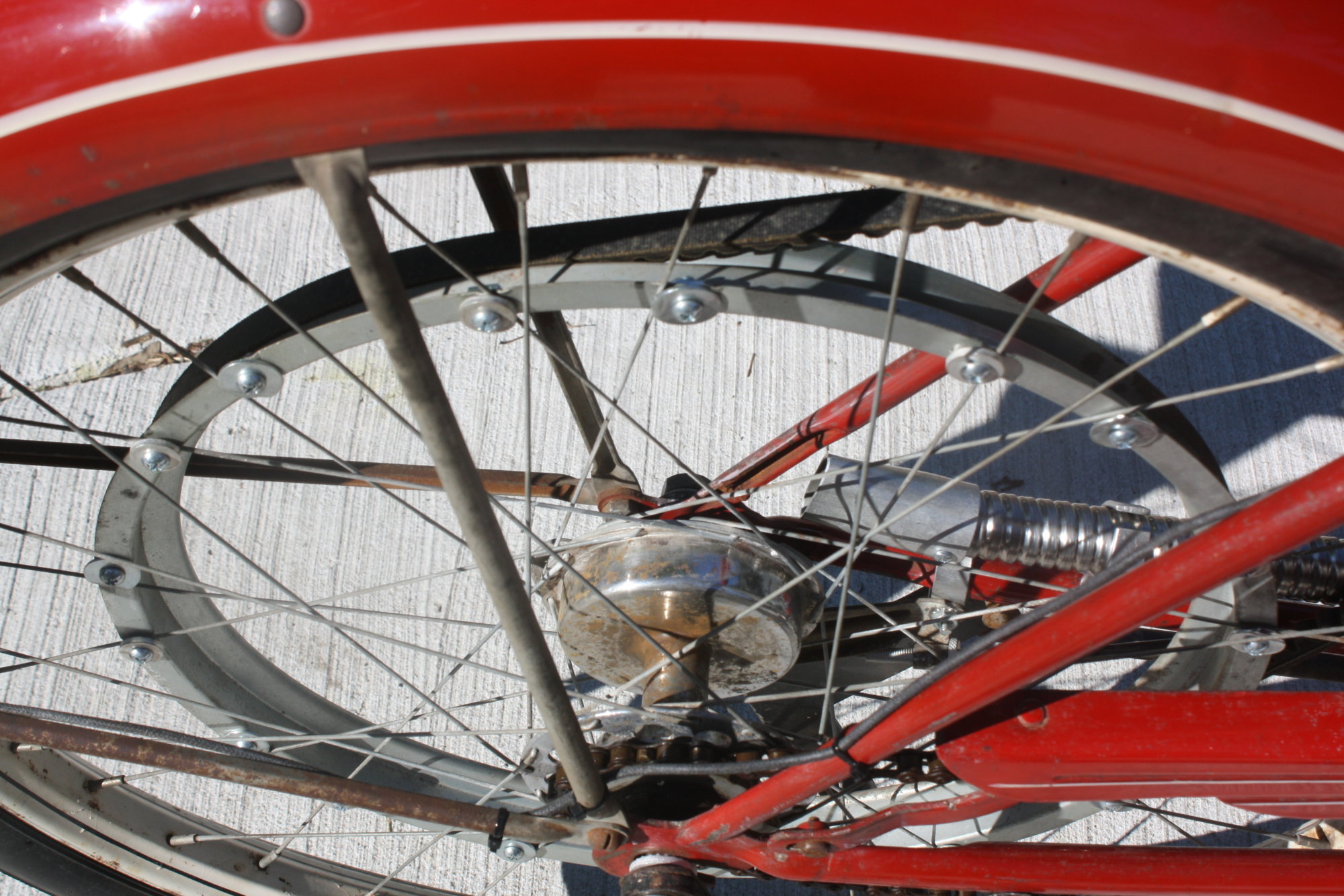 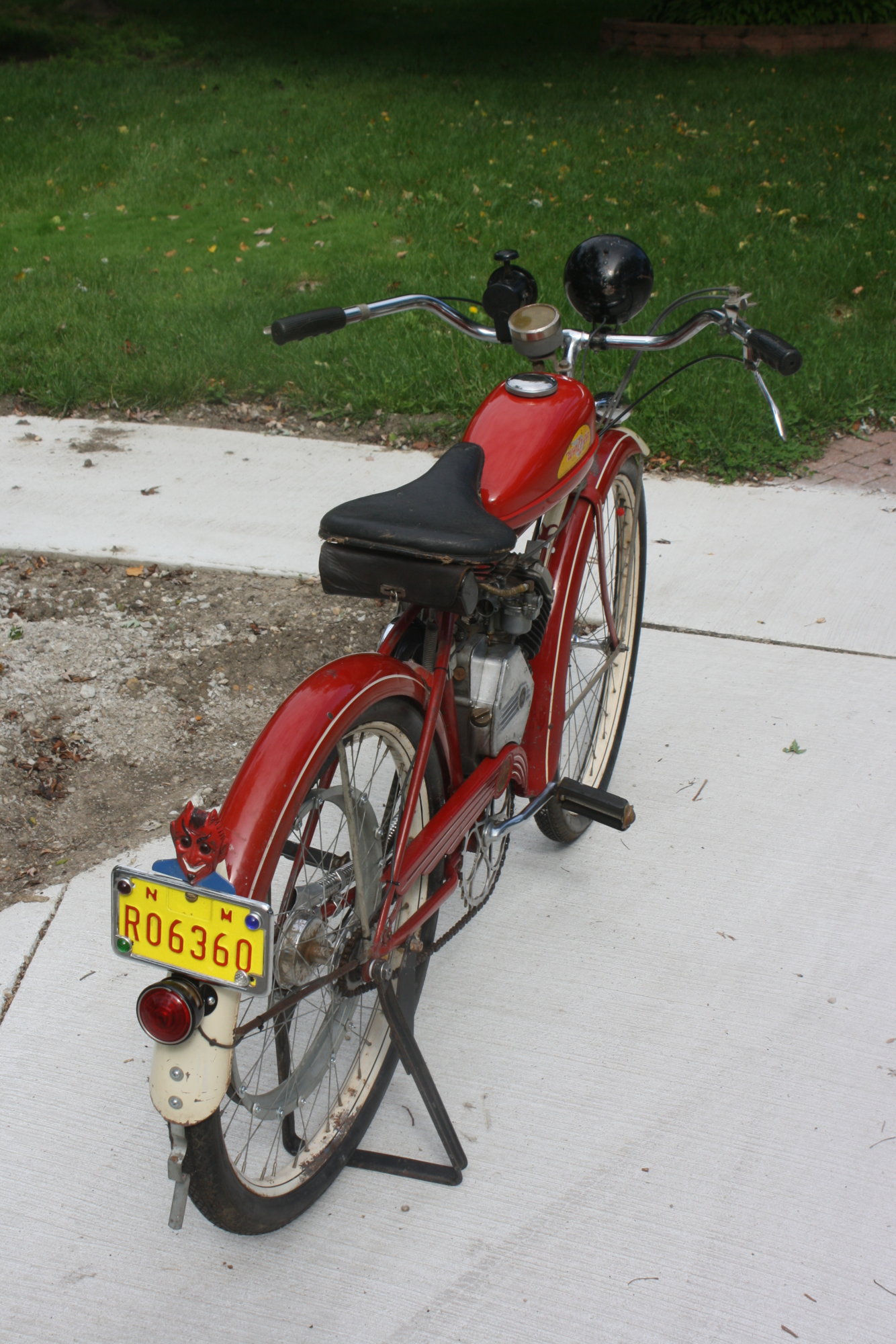 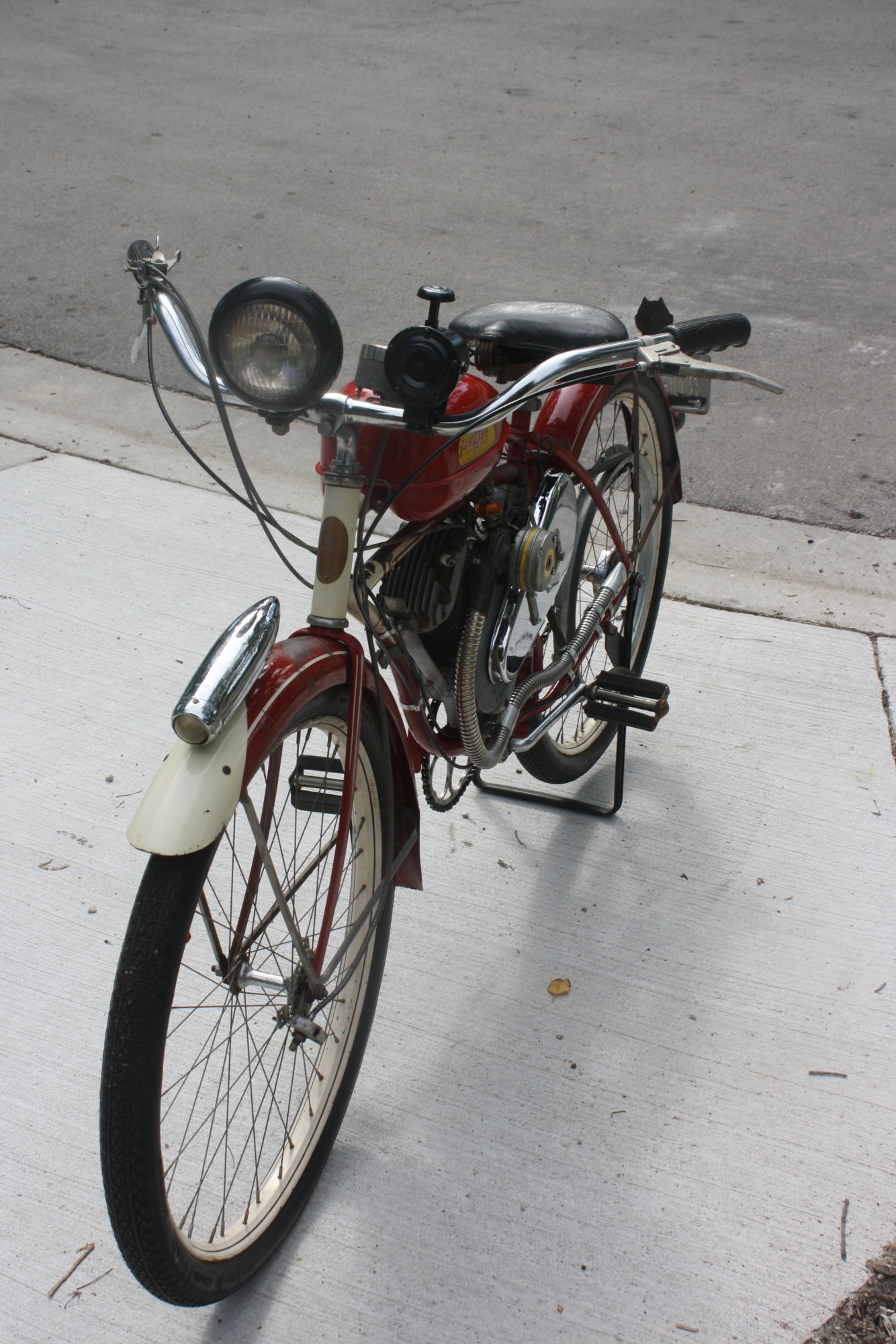 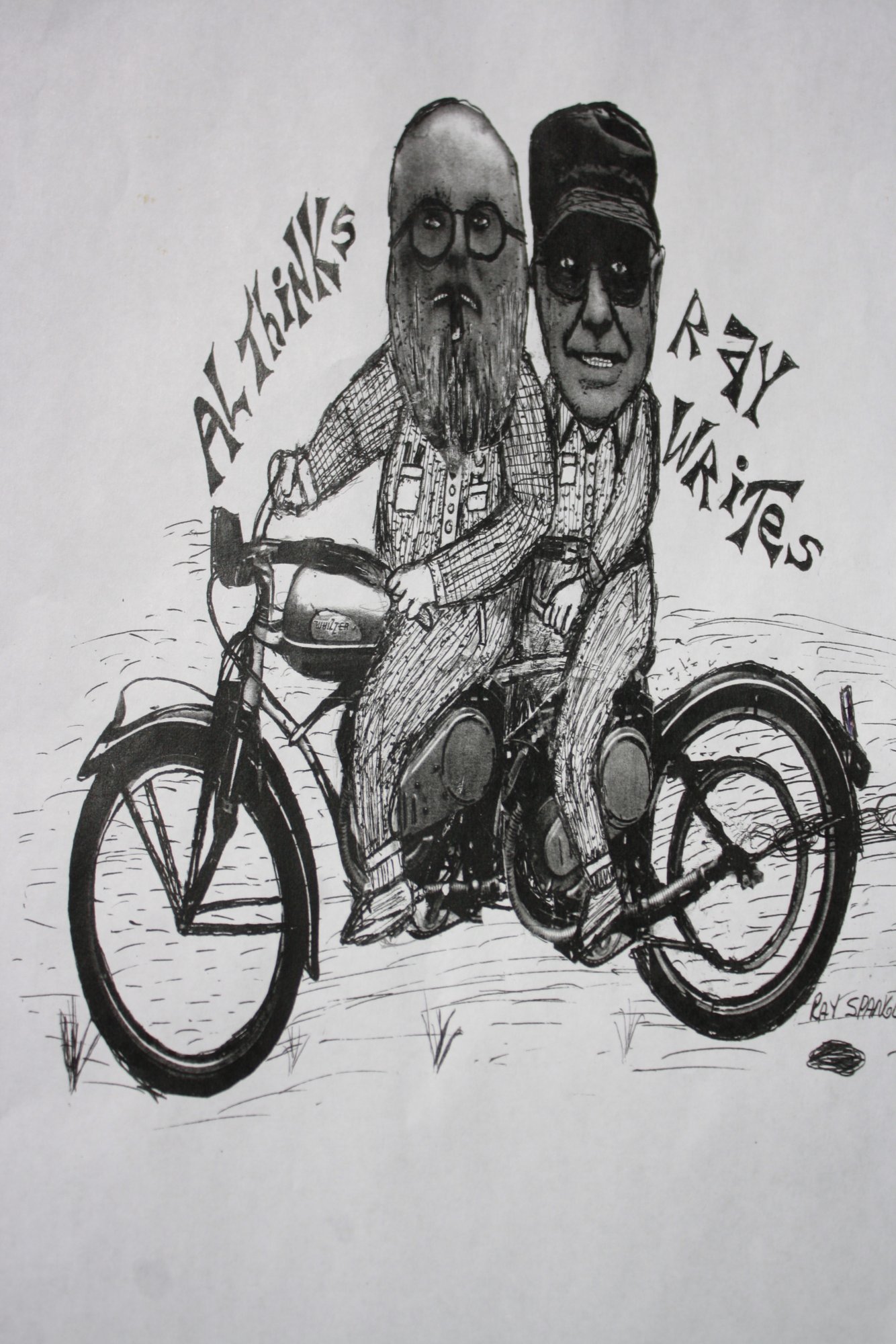 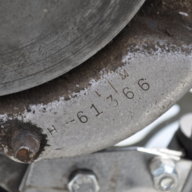 What a cool looking bike! I had the same devil on the back of a motorcycle for about 45 miles before the British single vibes cracked the mount. Luckily, he didn't fall off, but he's now shelf art only. Is Chuck Gatto still around? I bought some Whizzer parts off of him in 2001, and the email address I had for him seems to be defunct. Thanks! 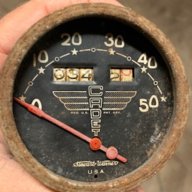 wordman5 said:
What a cool looking bike! I had the same devil on the back of a motorcycle for about 45 miles before the British single vibes cracked the mount. Luckily, he didn't fall off, but he's now shelf art only. Is Chuck Gatto still around? I bought some Whizzer parts off of him in 2001, and the email address I had for him seems to be defunct. Thanks!
Click to expand...