MAJOR UPDATE:
I've found a reasonably priced local wheelbuilder. The wheels for this bike will be complete by this Saturday, October 15. I will be finishing the skirt guard in the mean time.

This bicycle is now offered ready to ride! 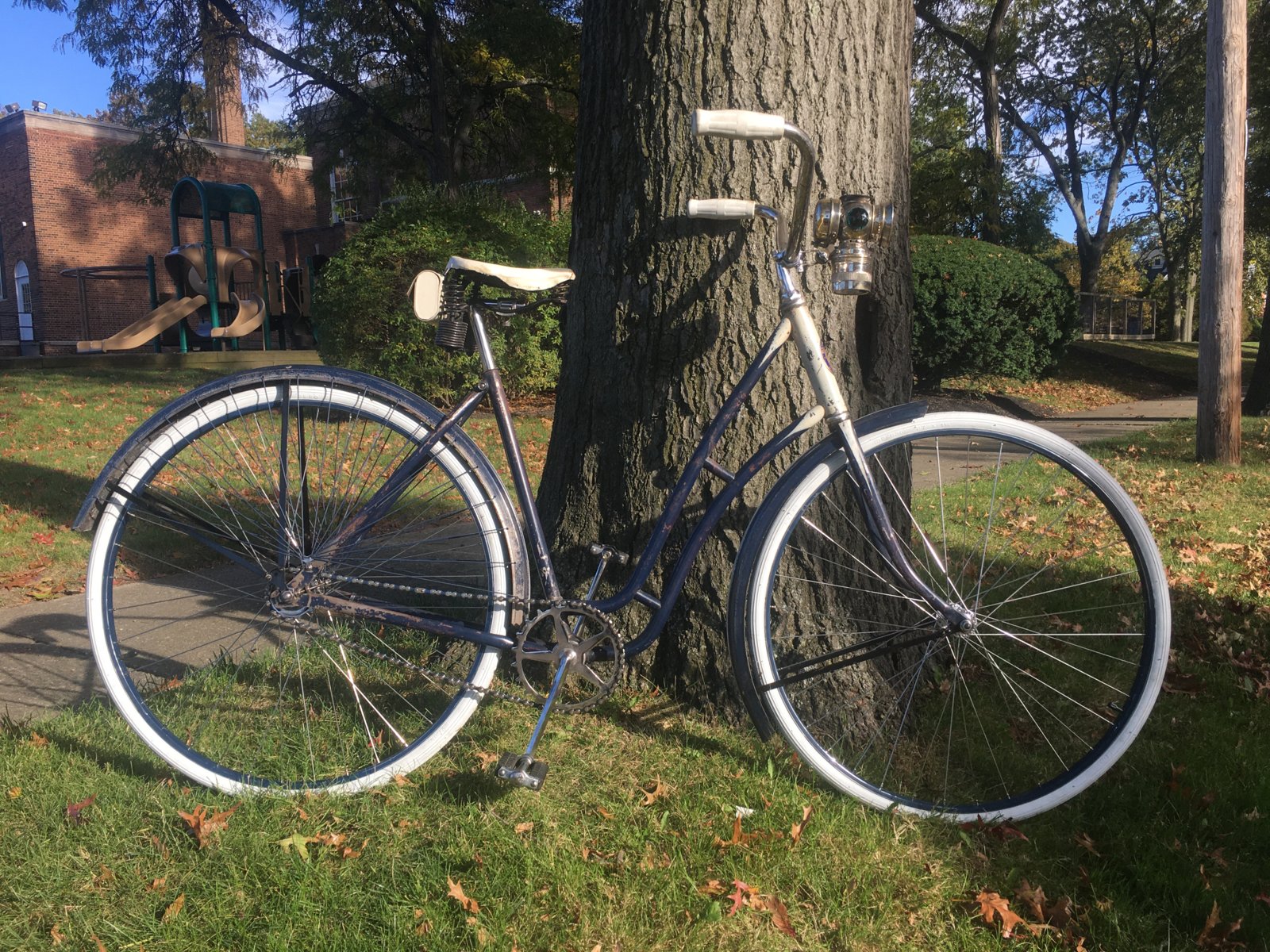 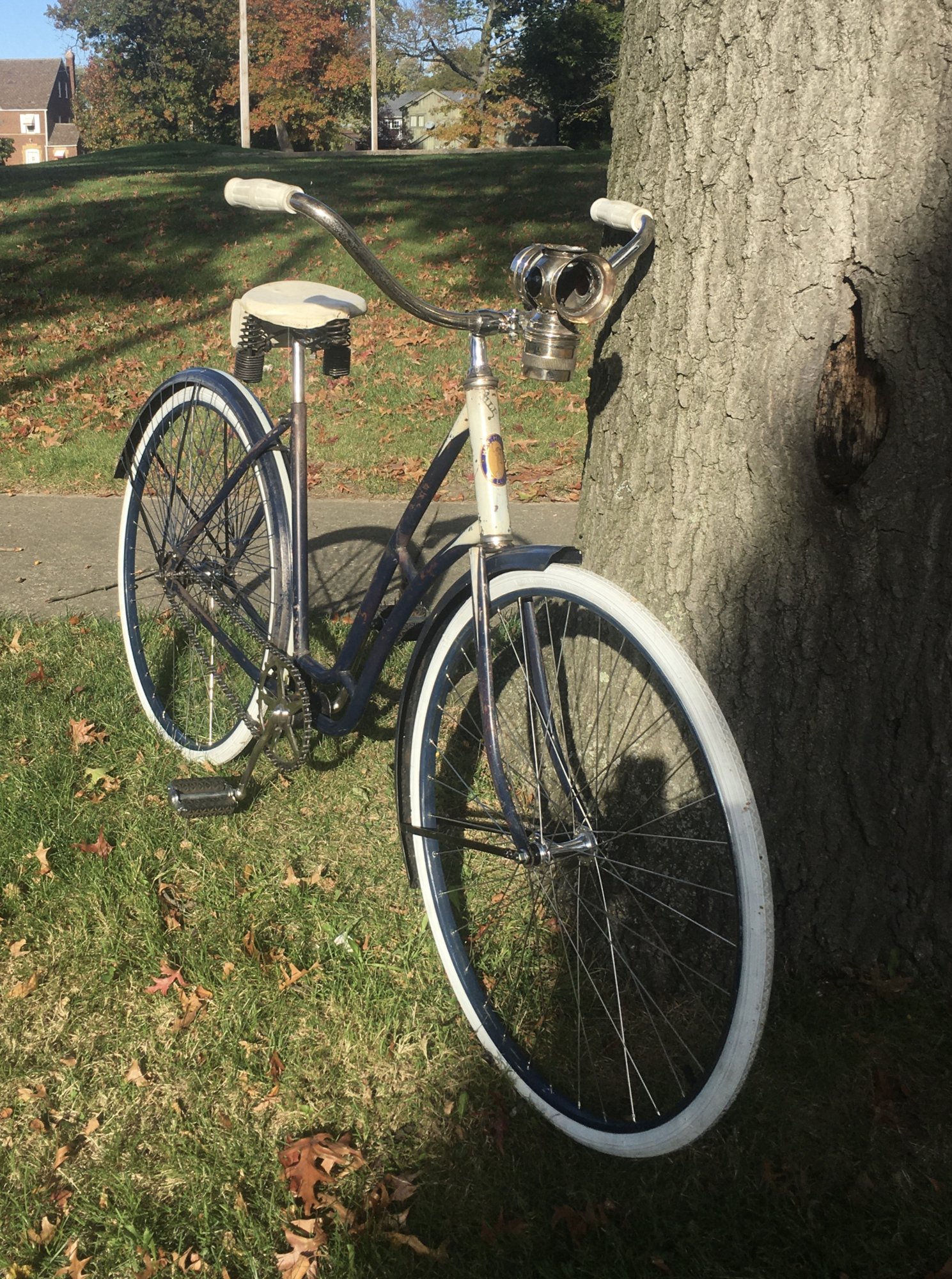 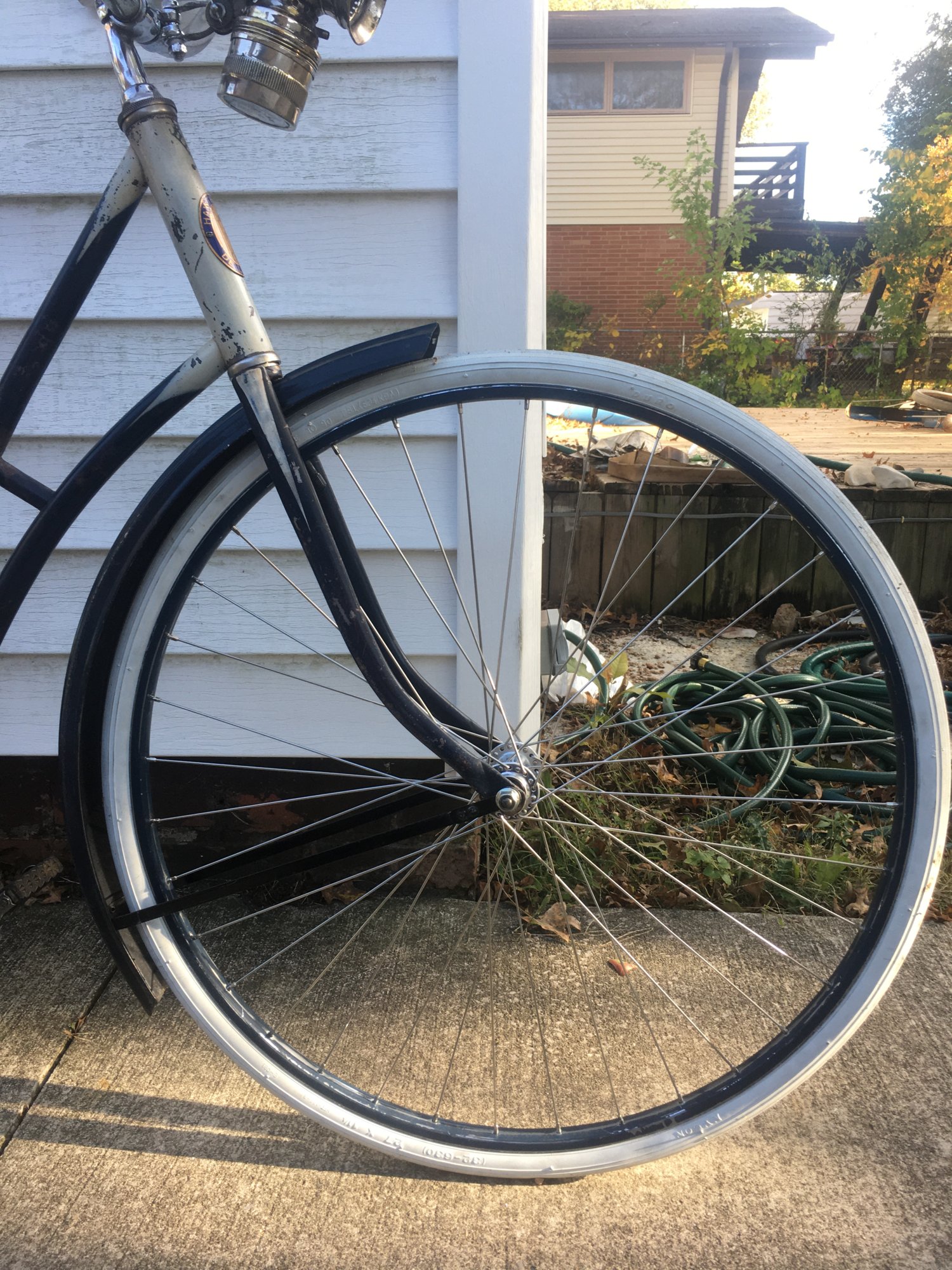 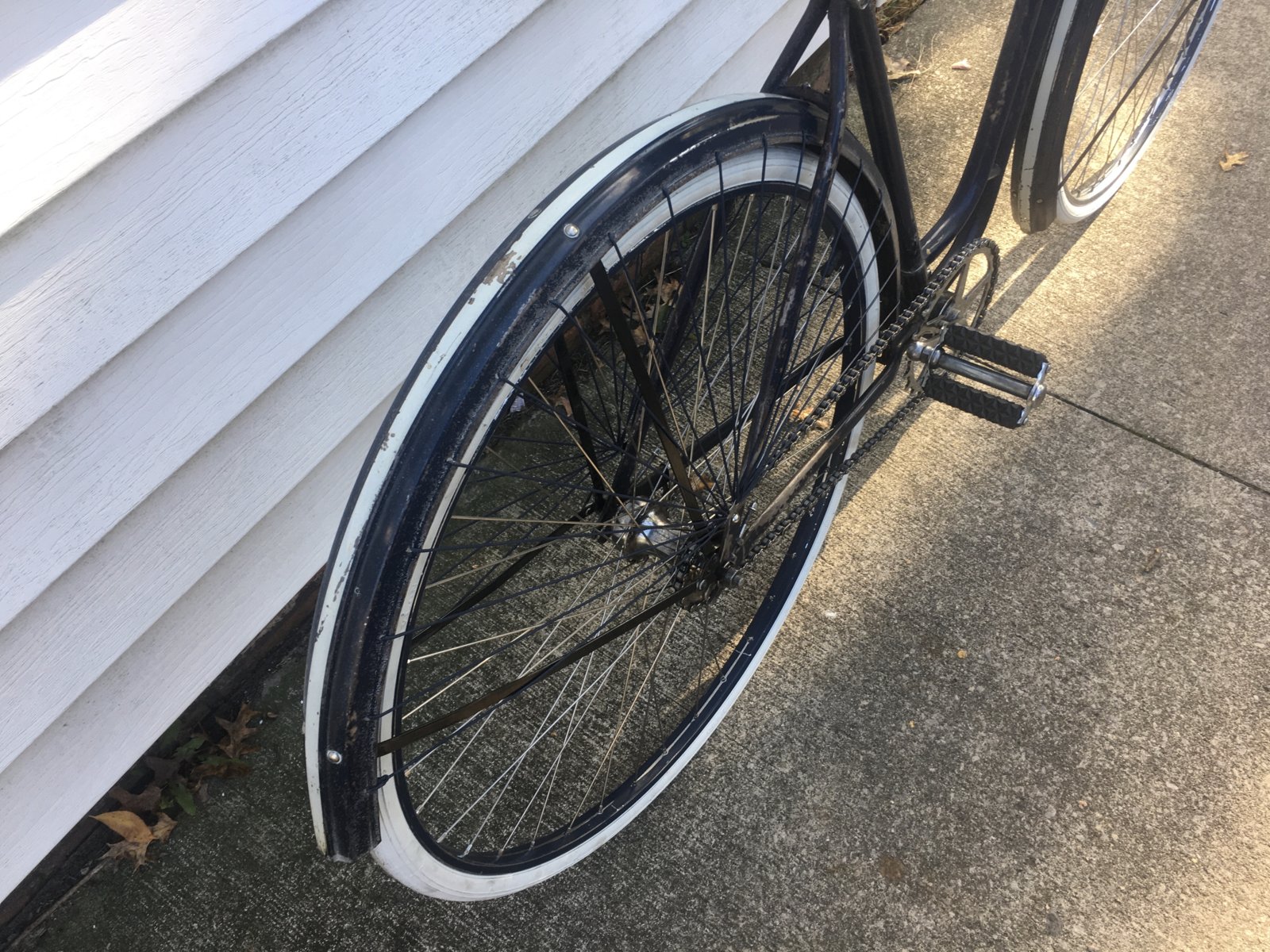 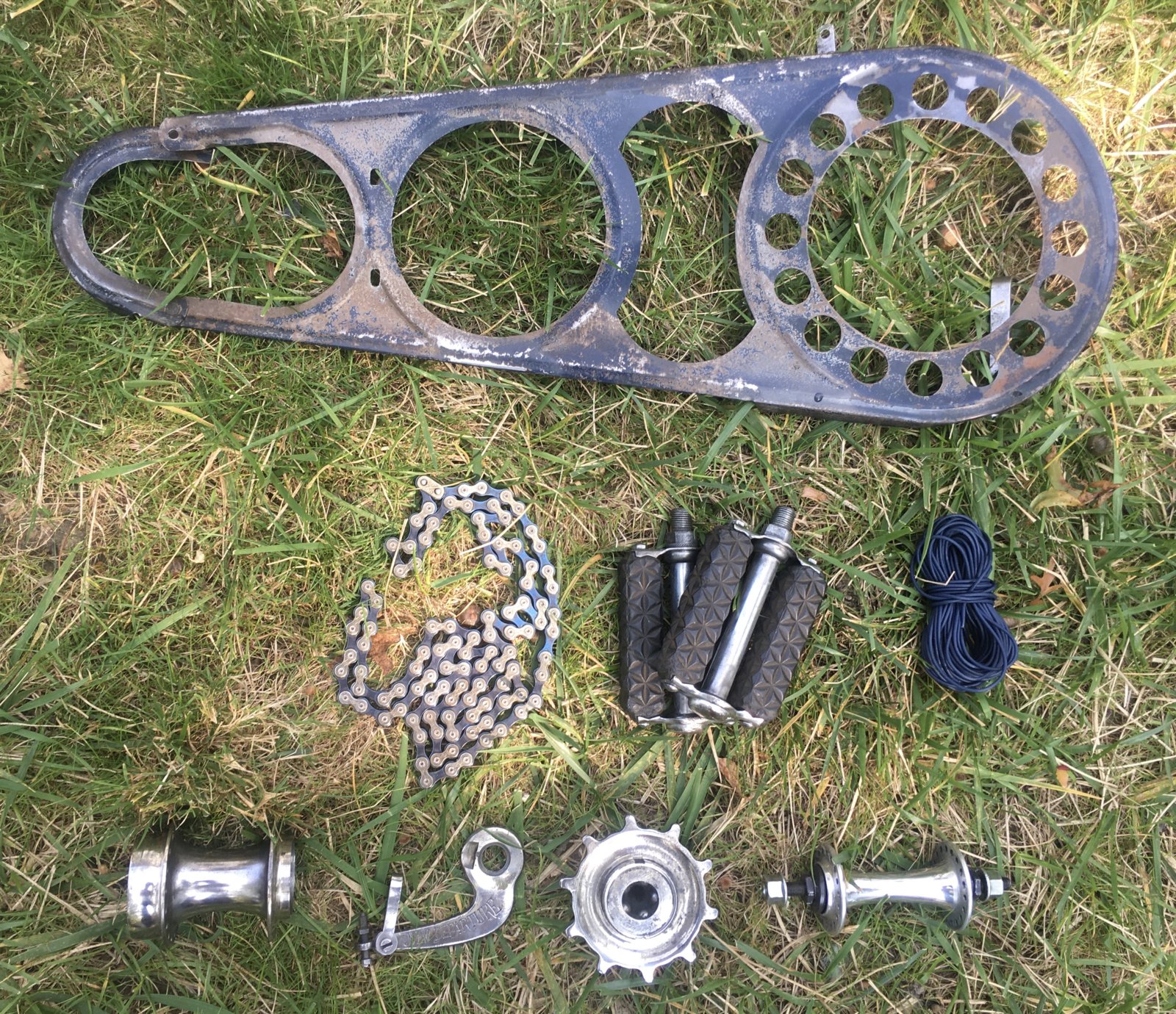 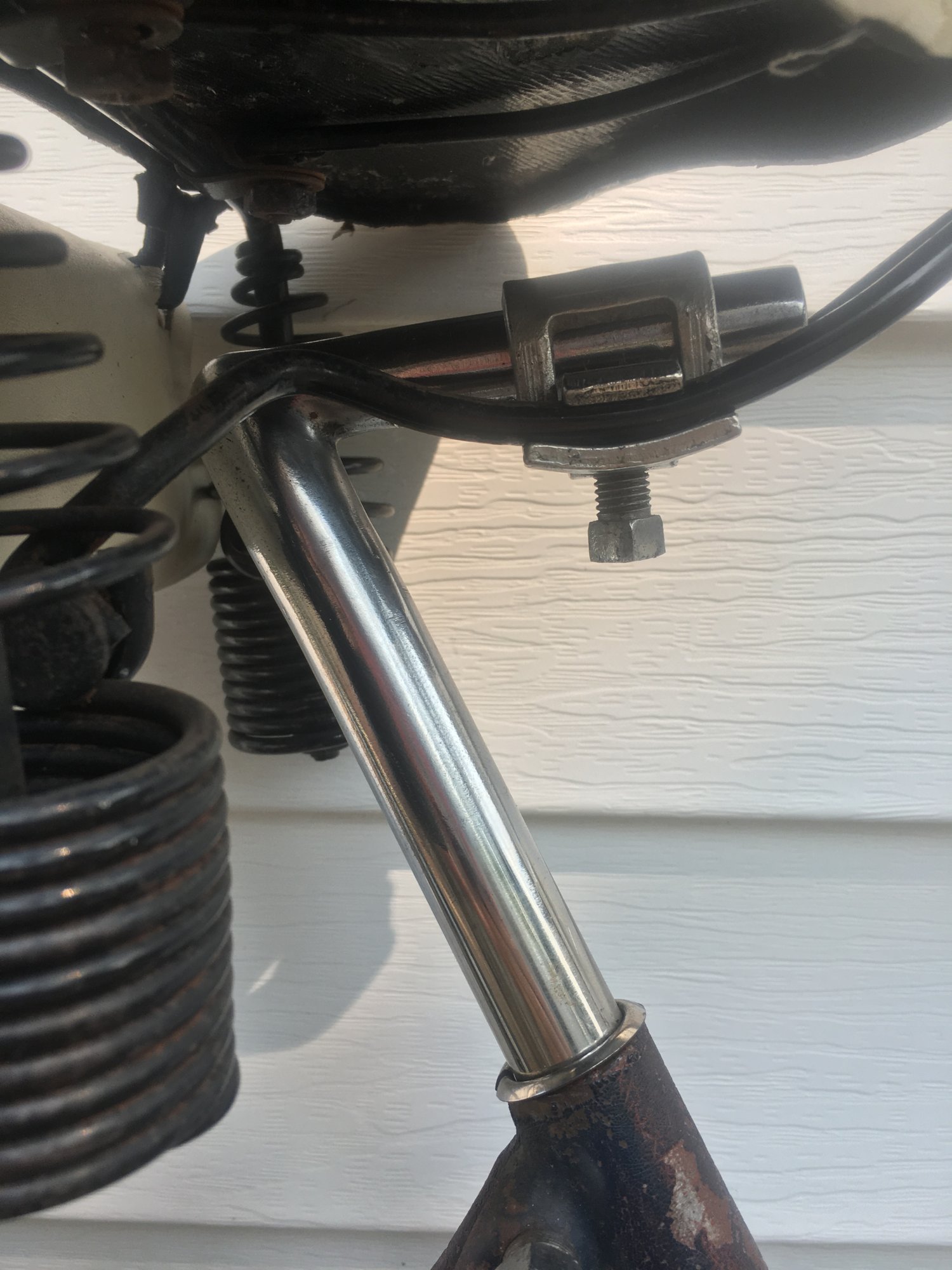 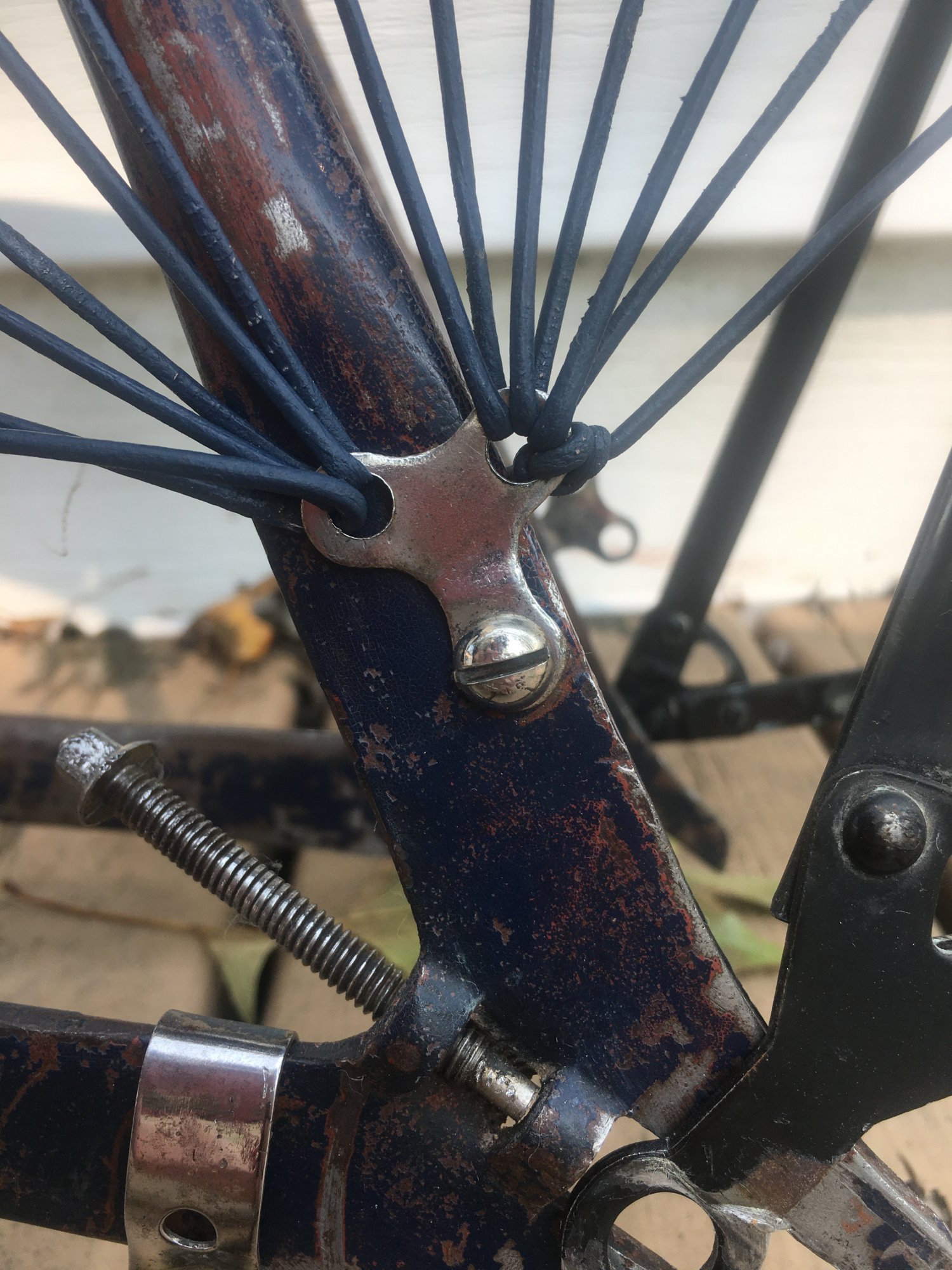 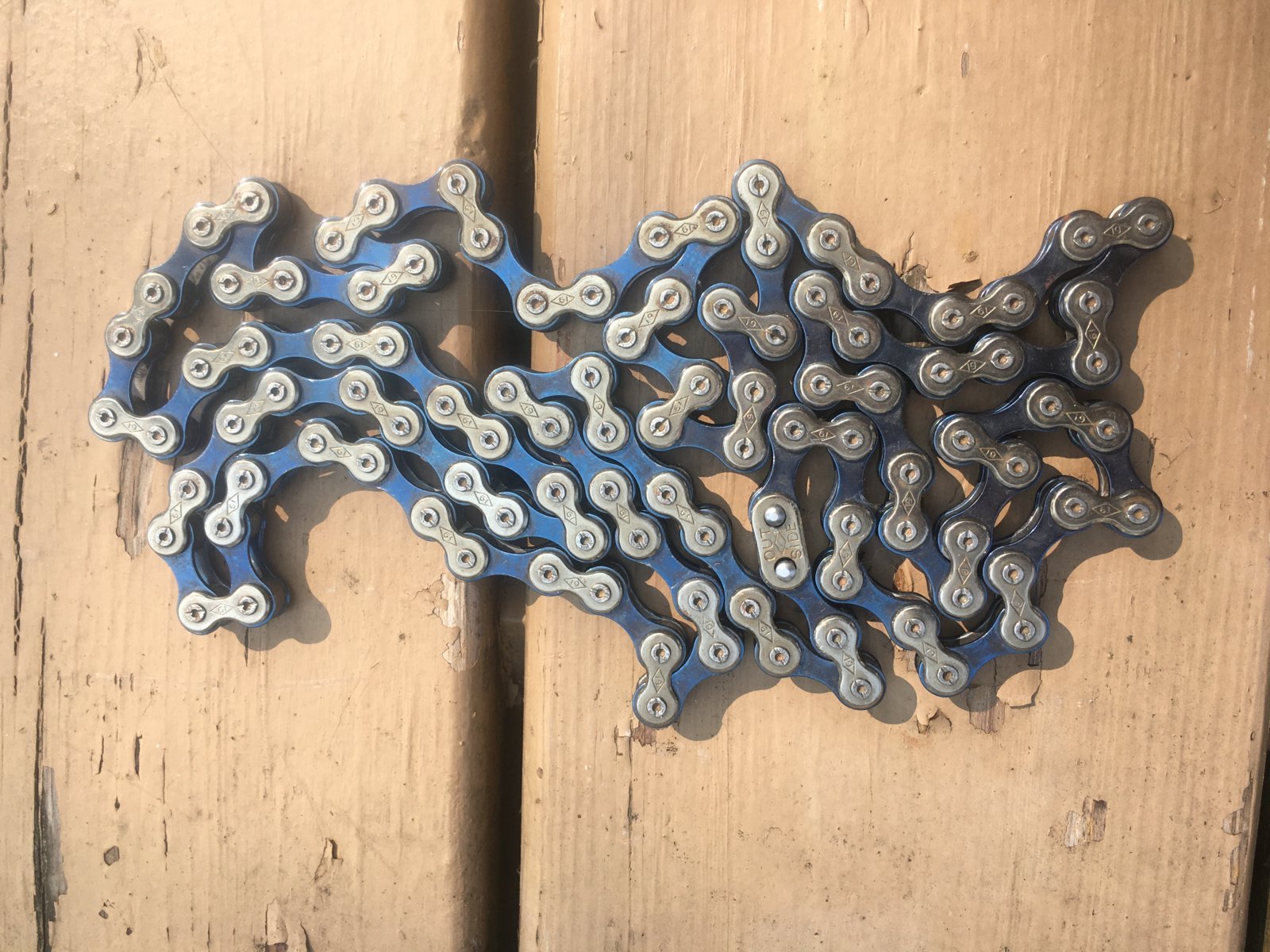 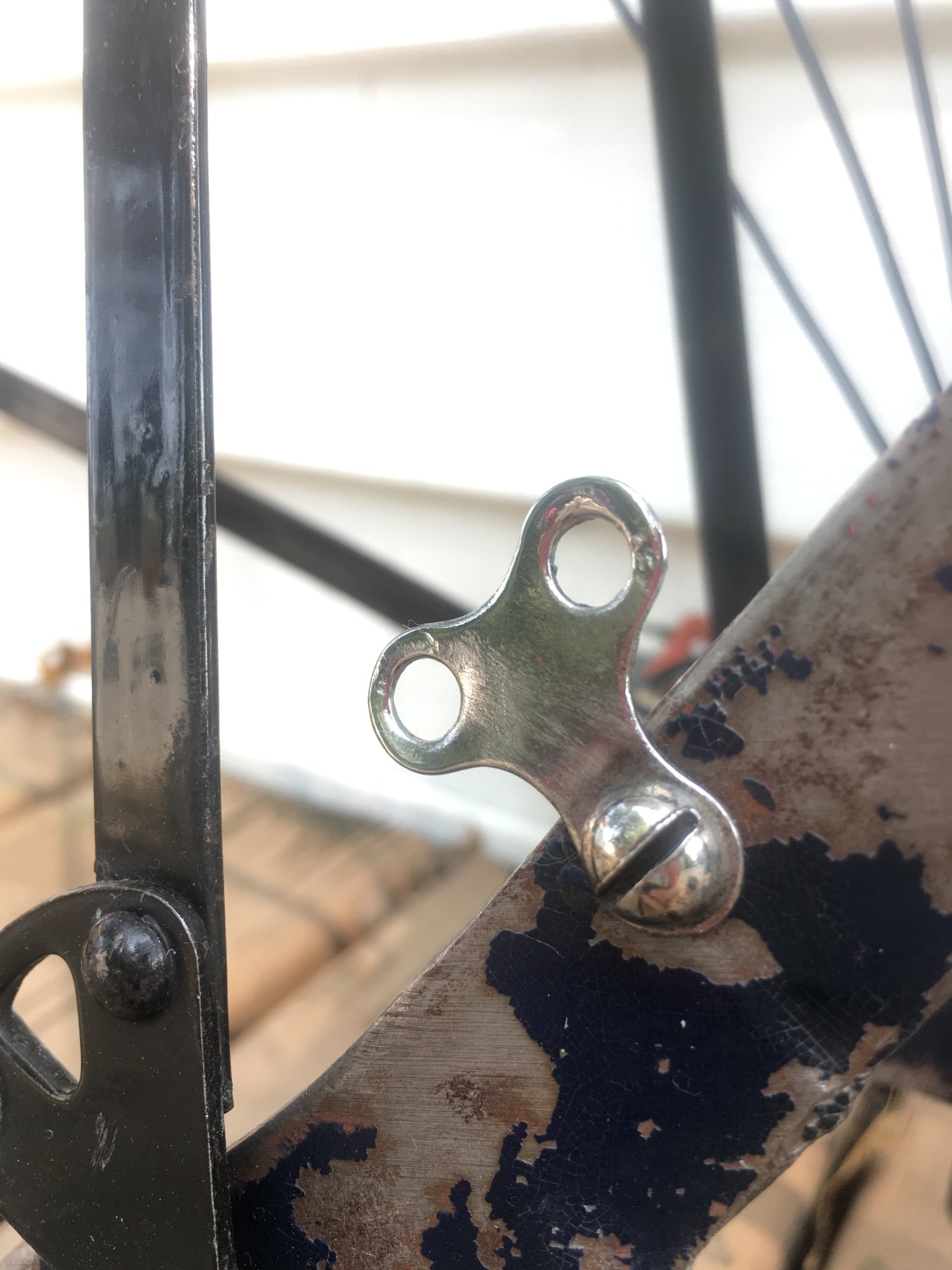 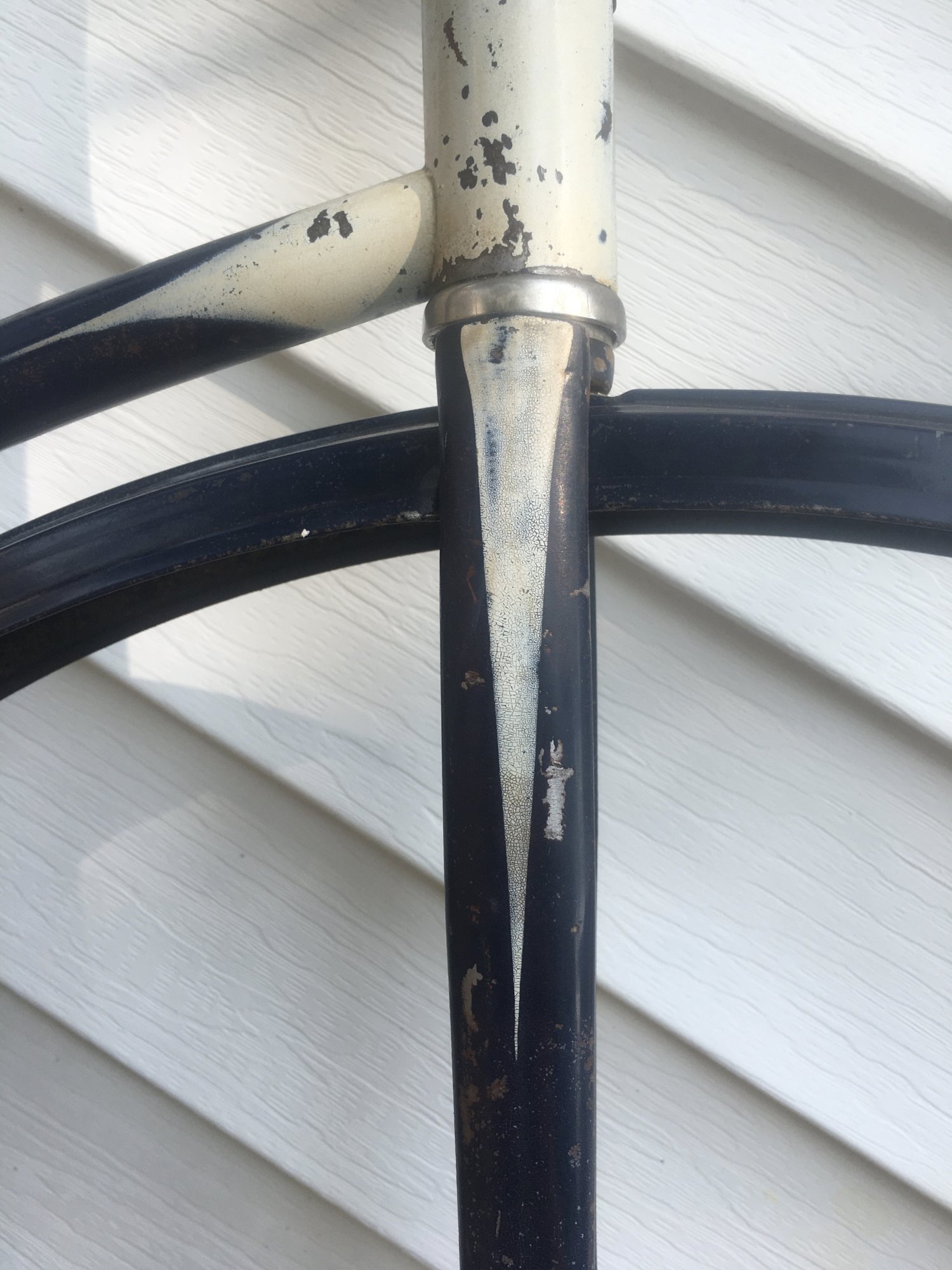 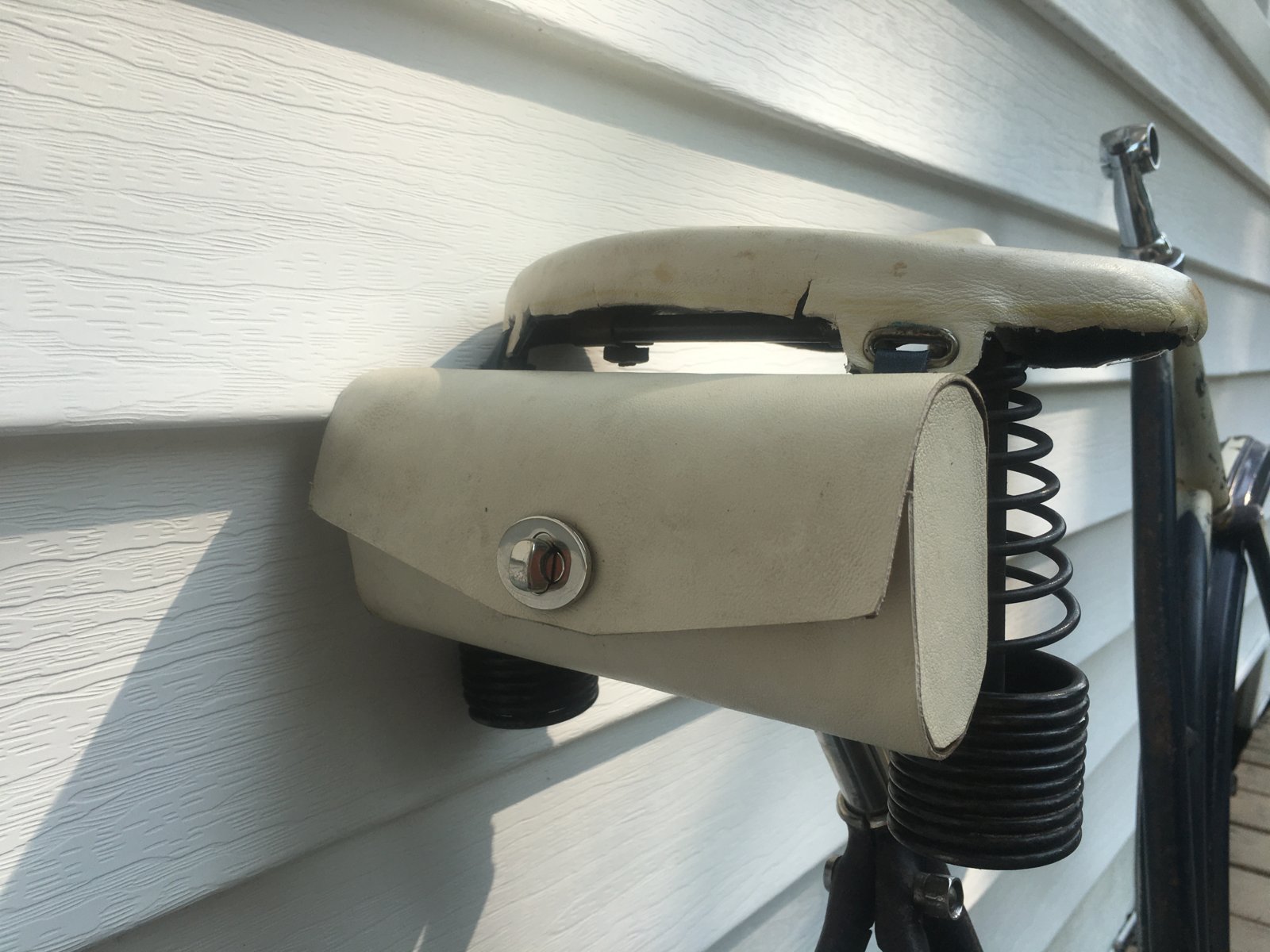 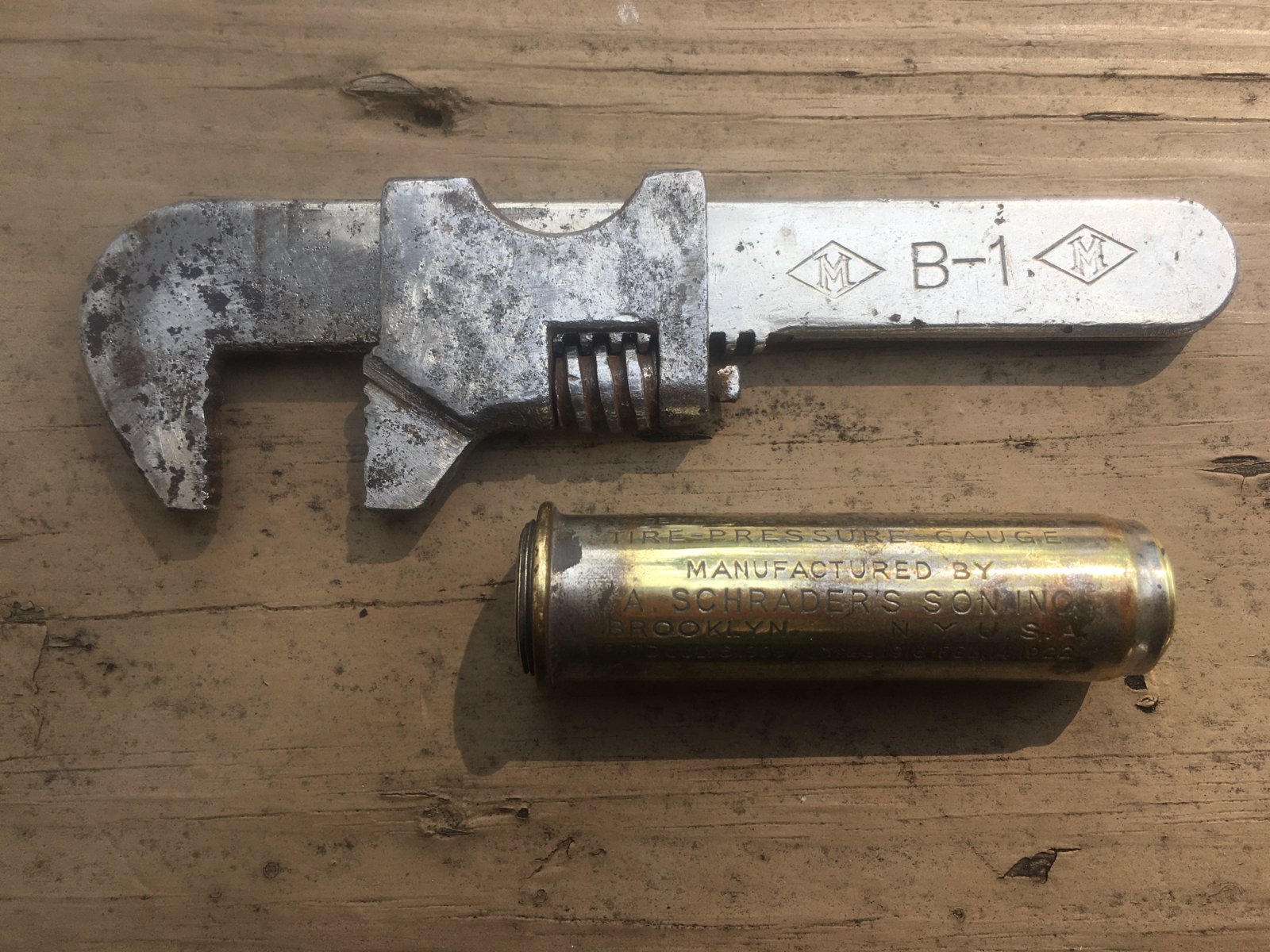 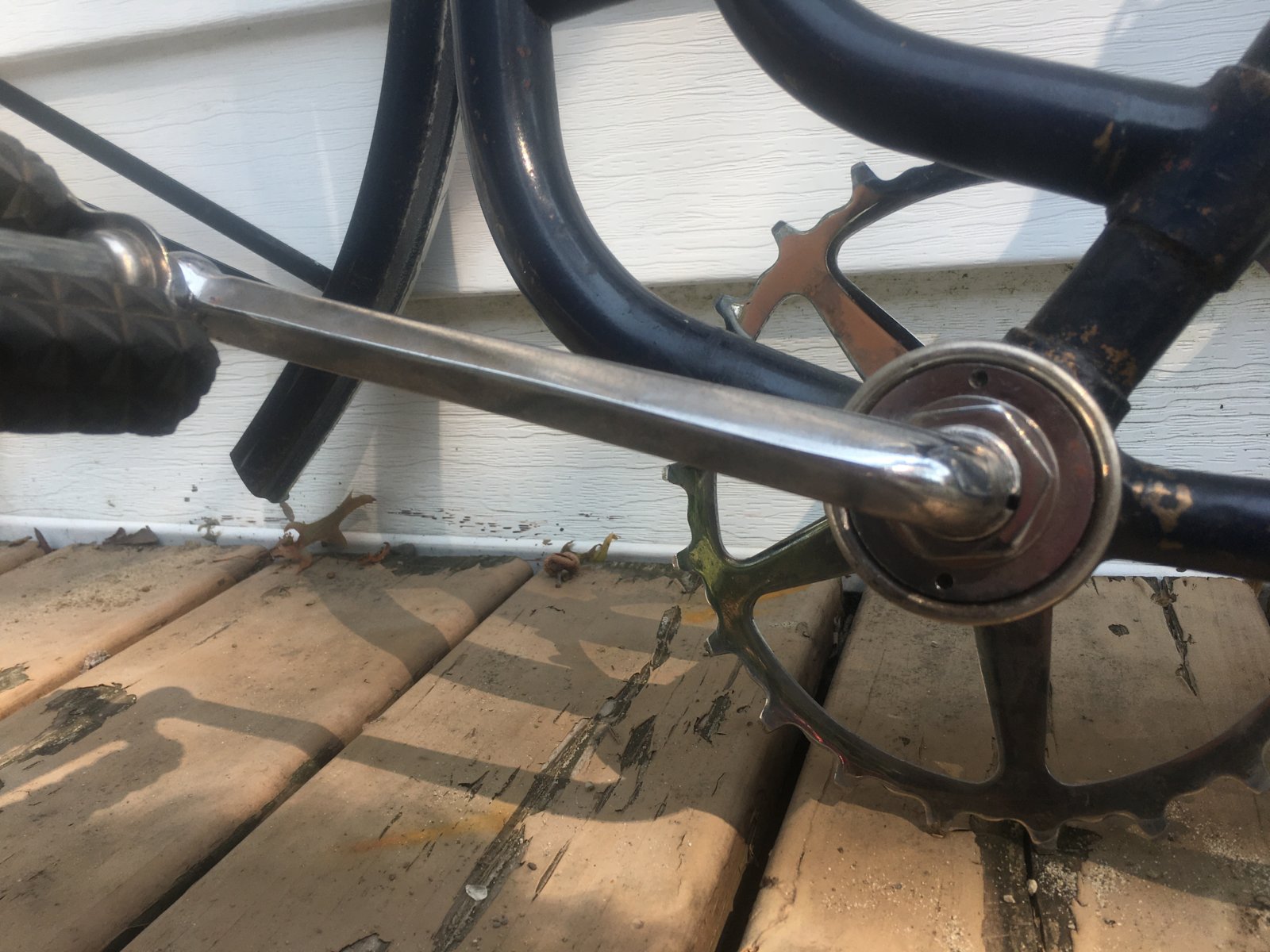 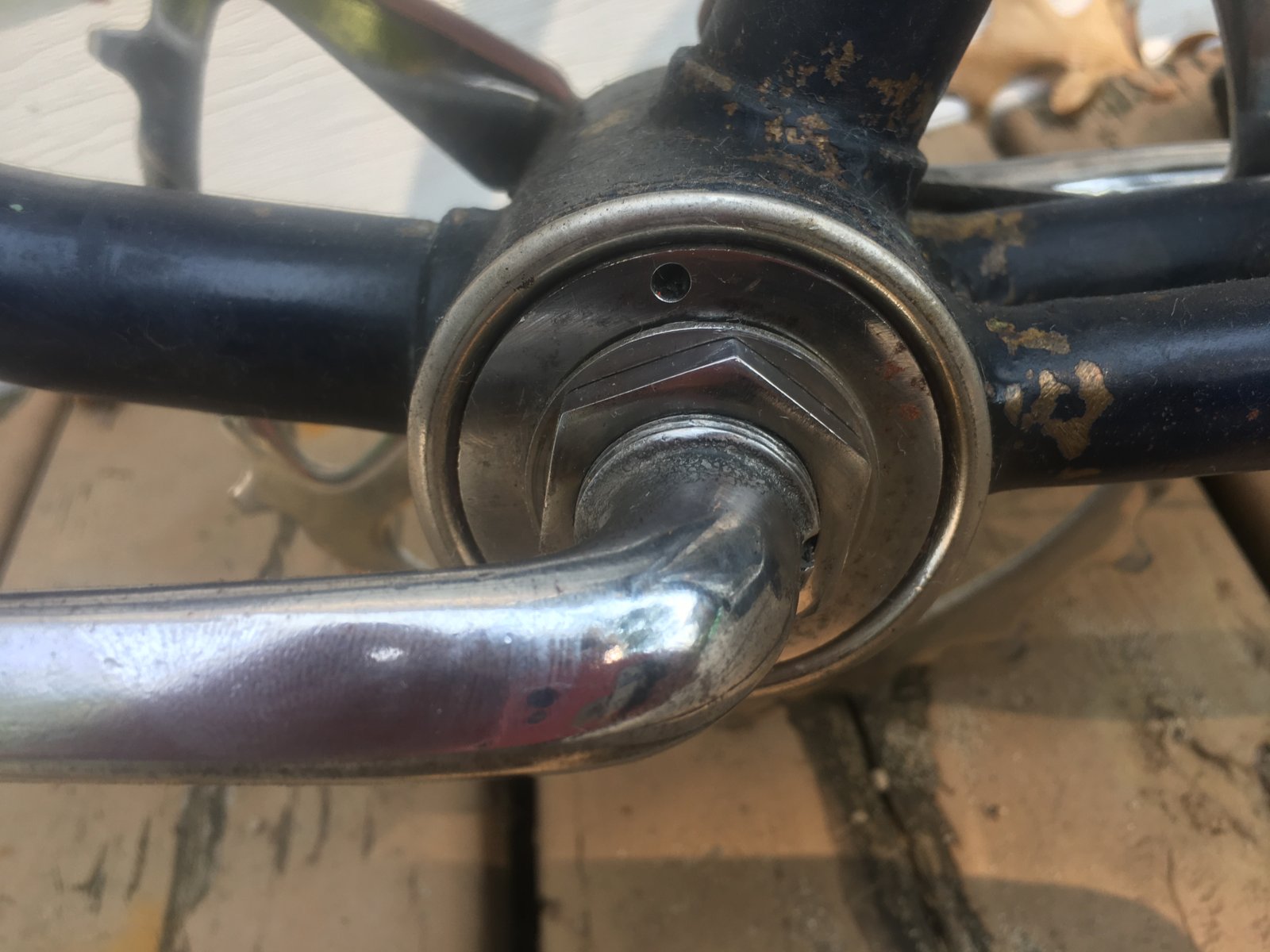 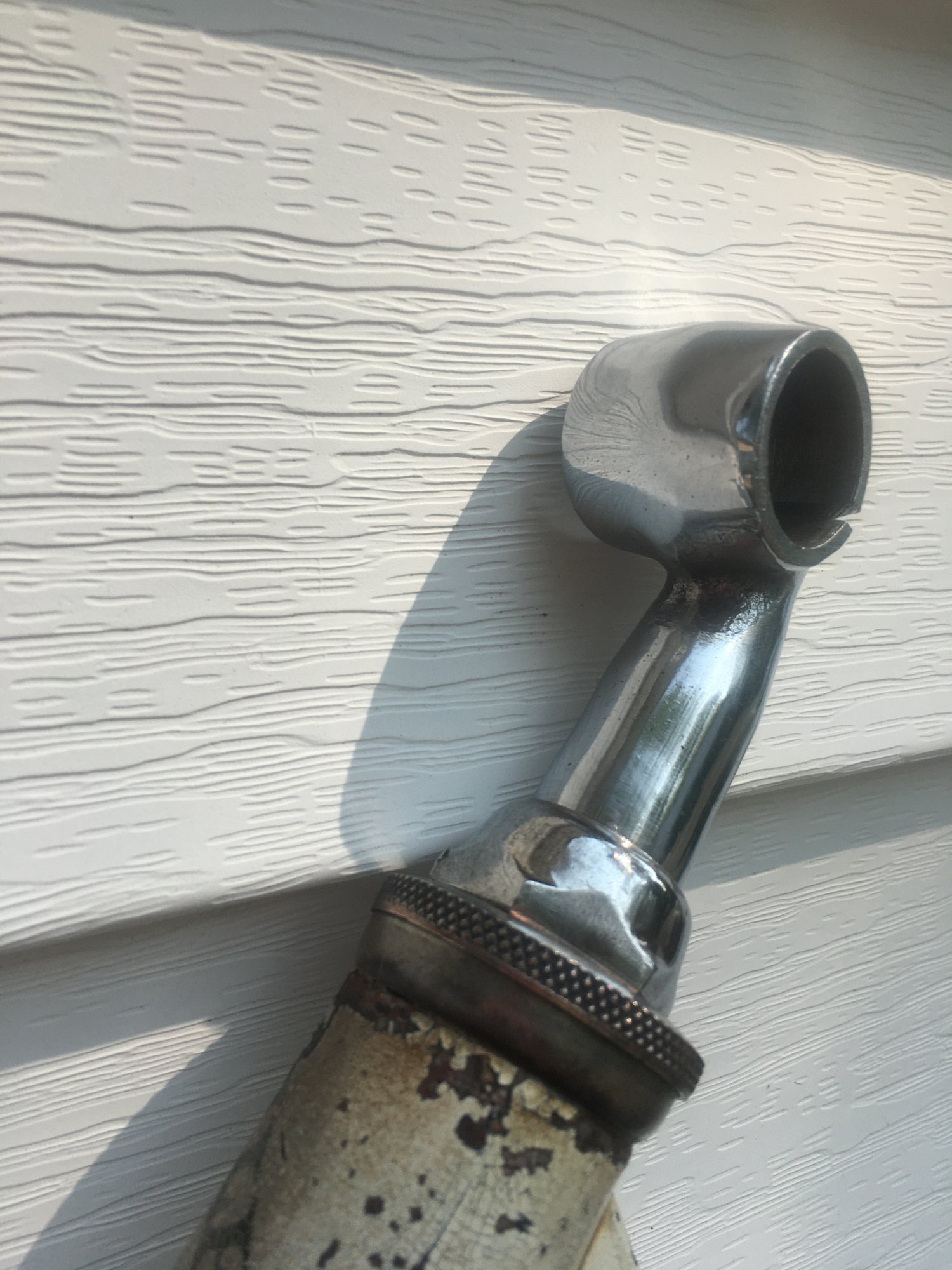 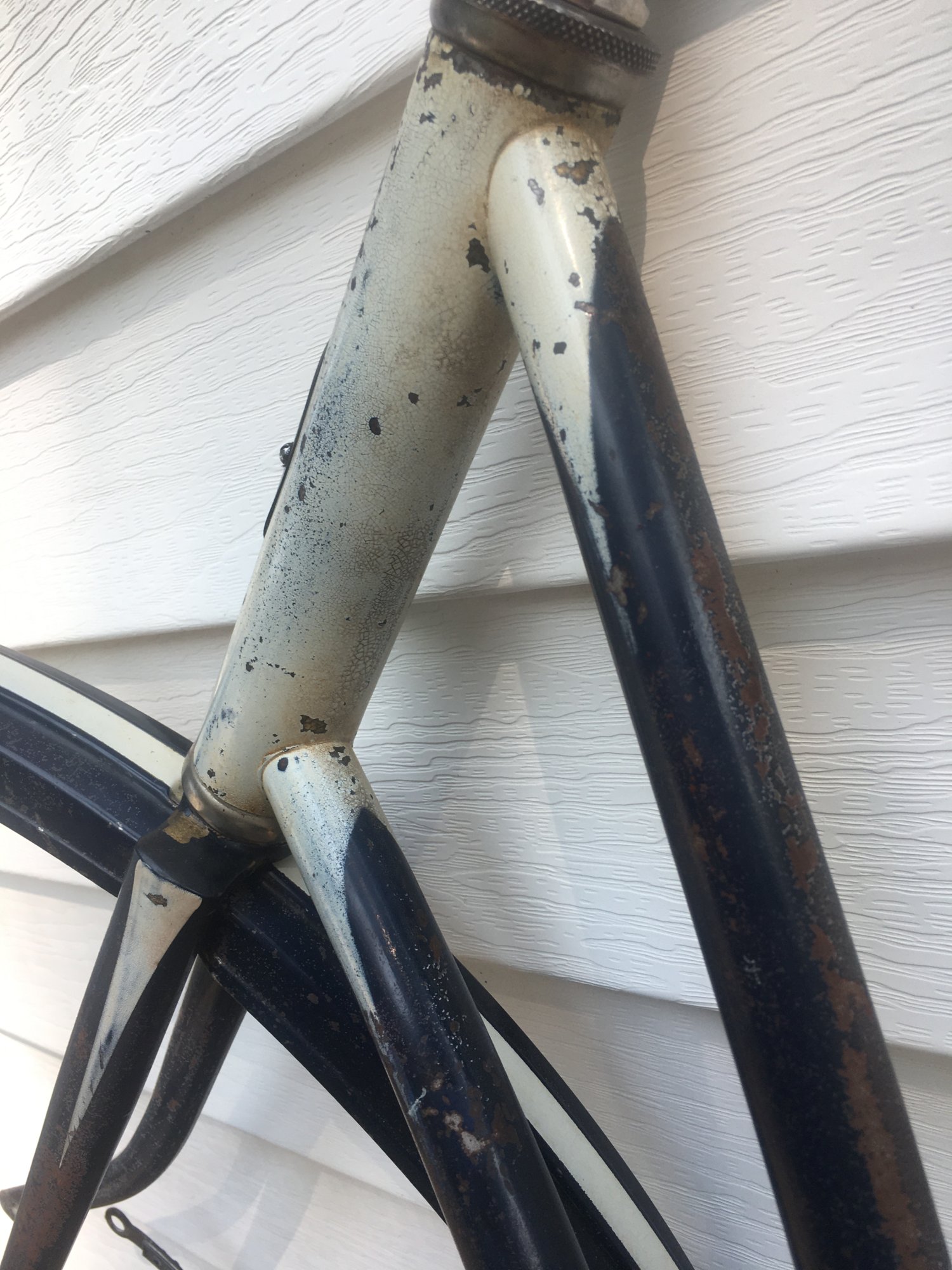 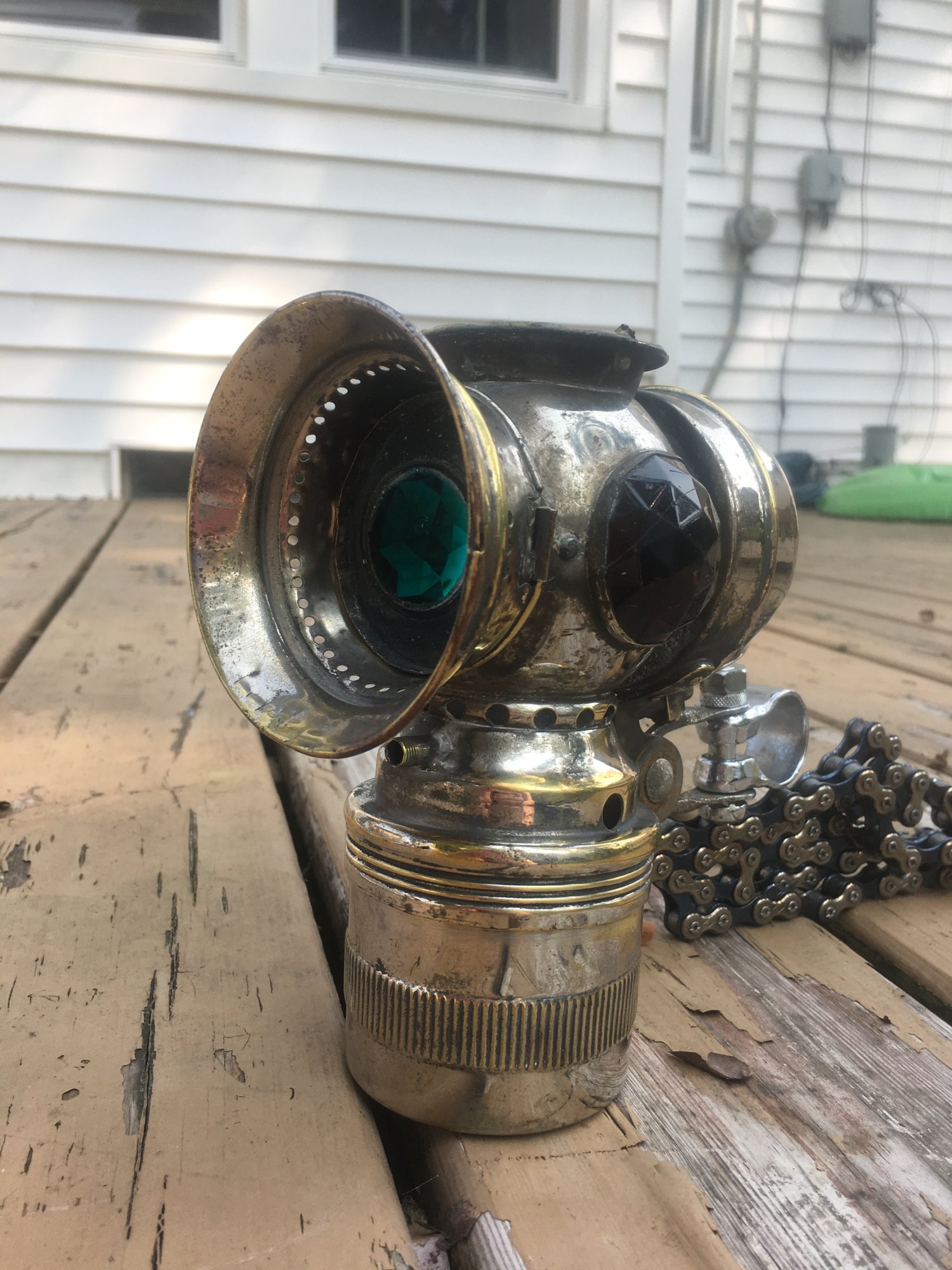 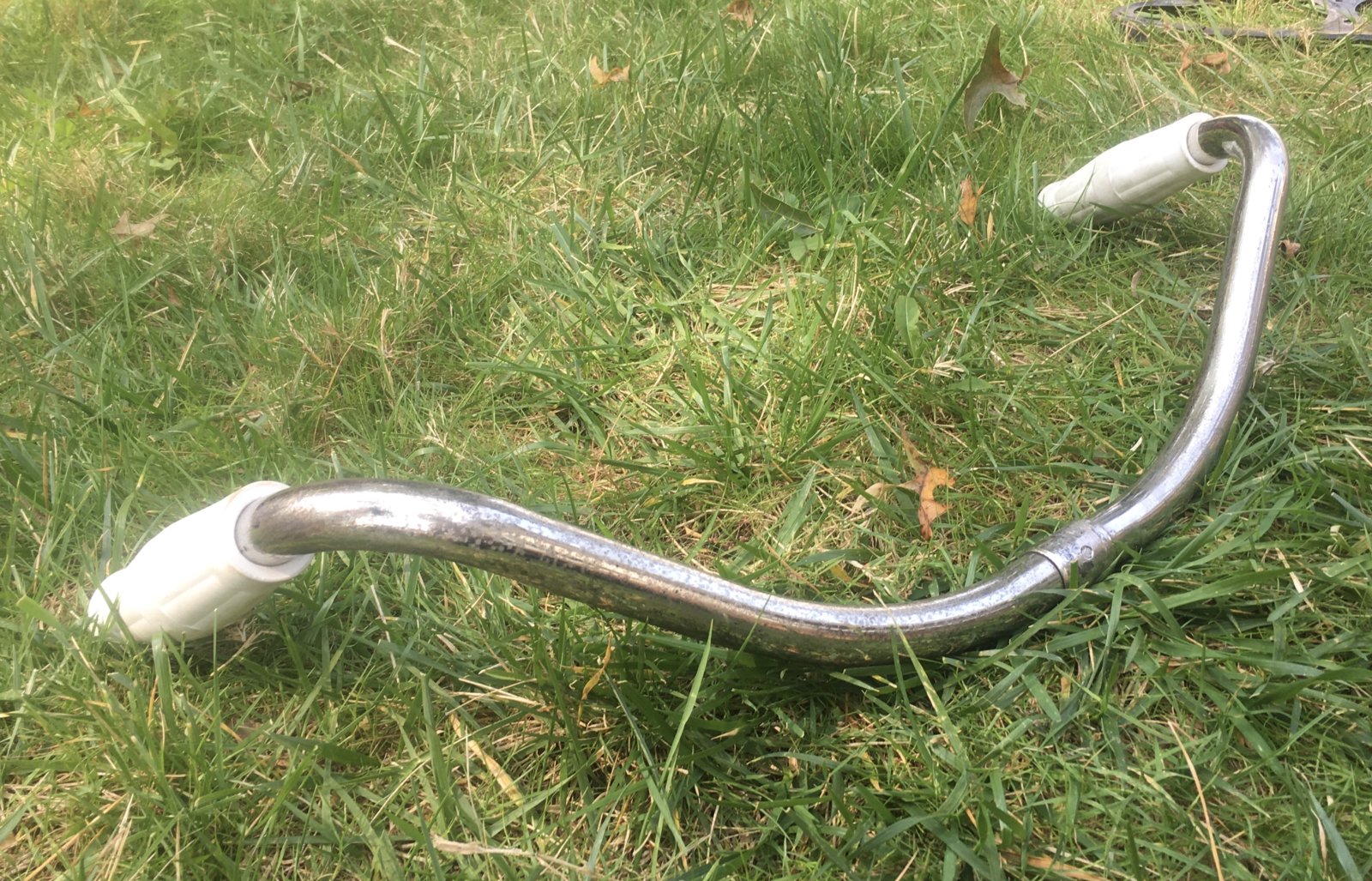 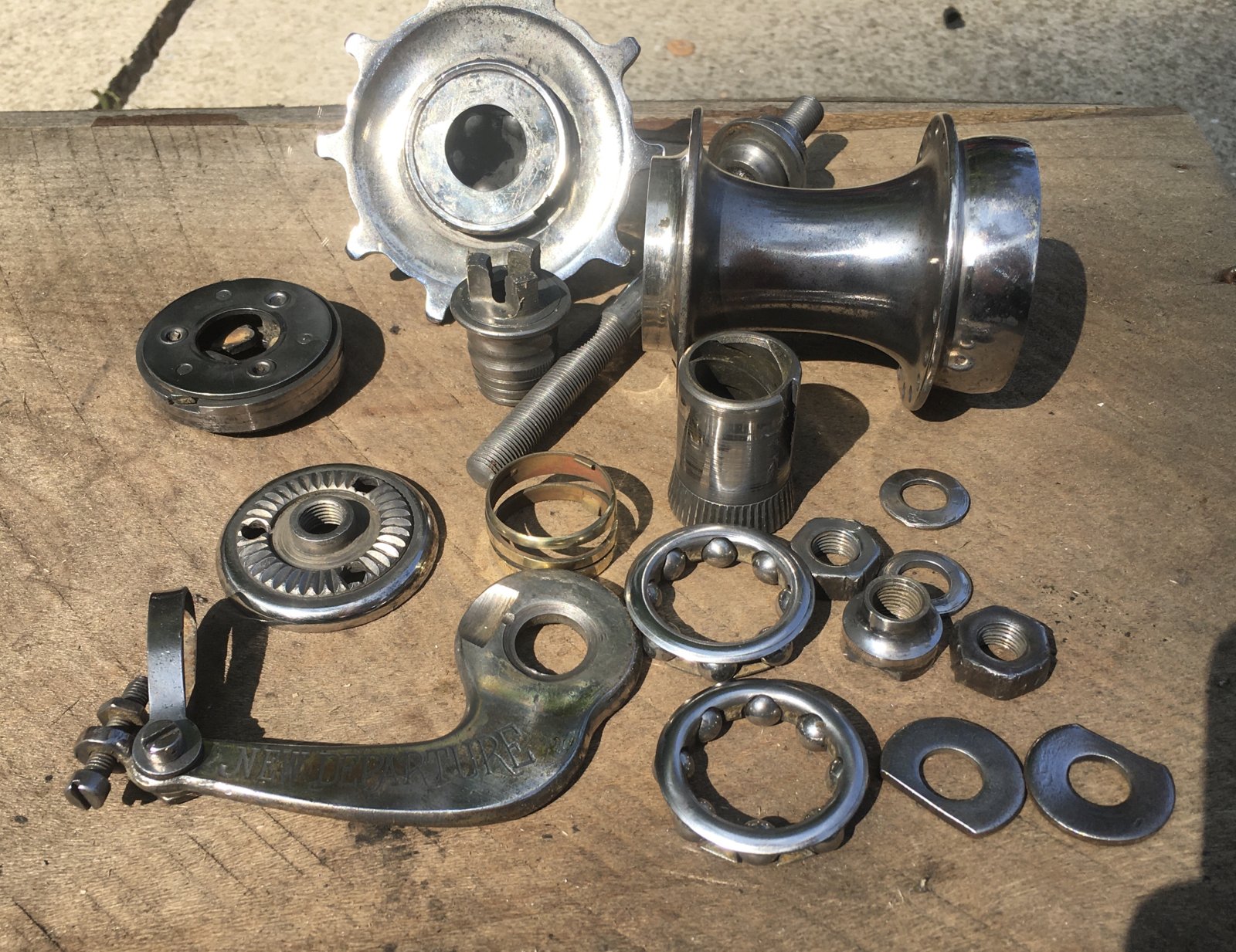 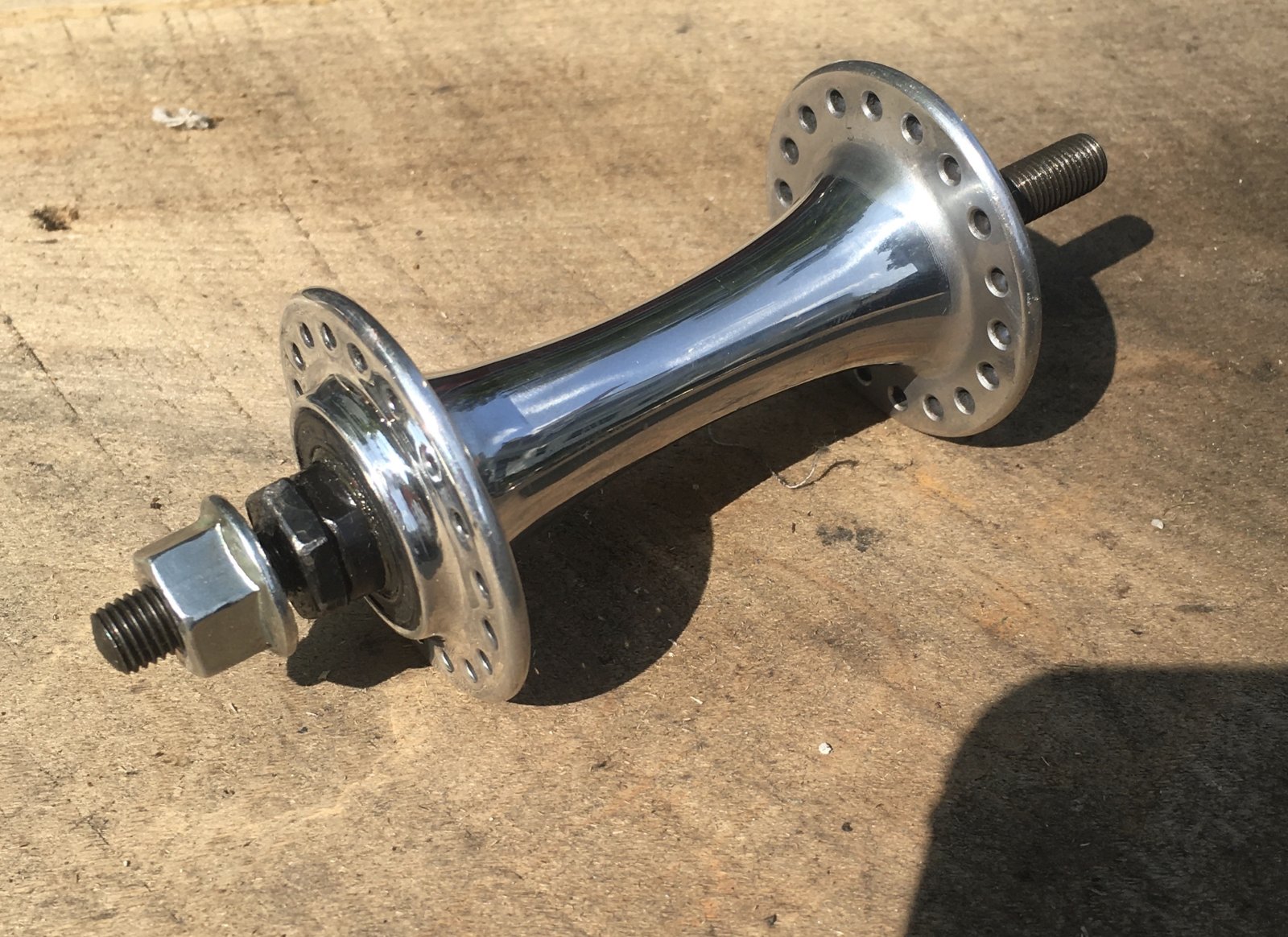 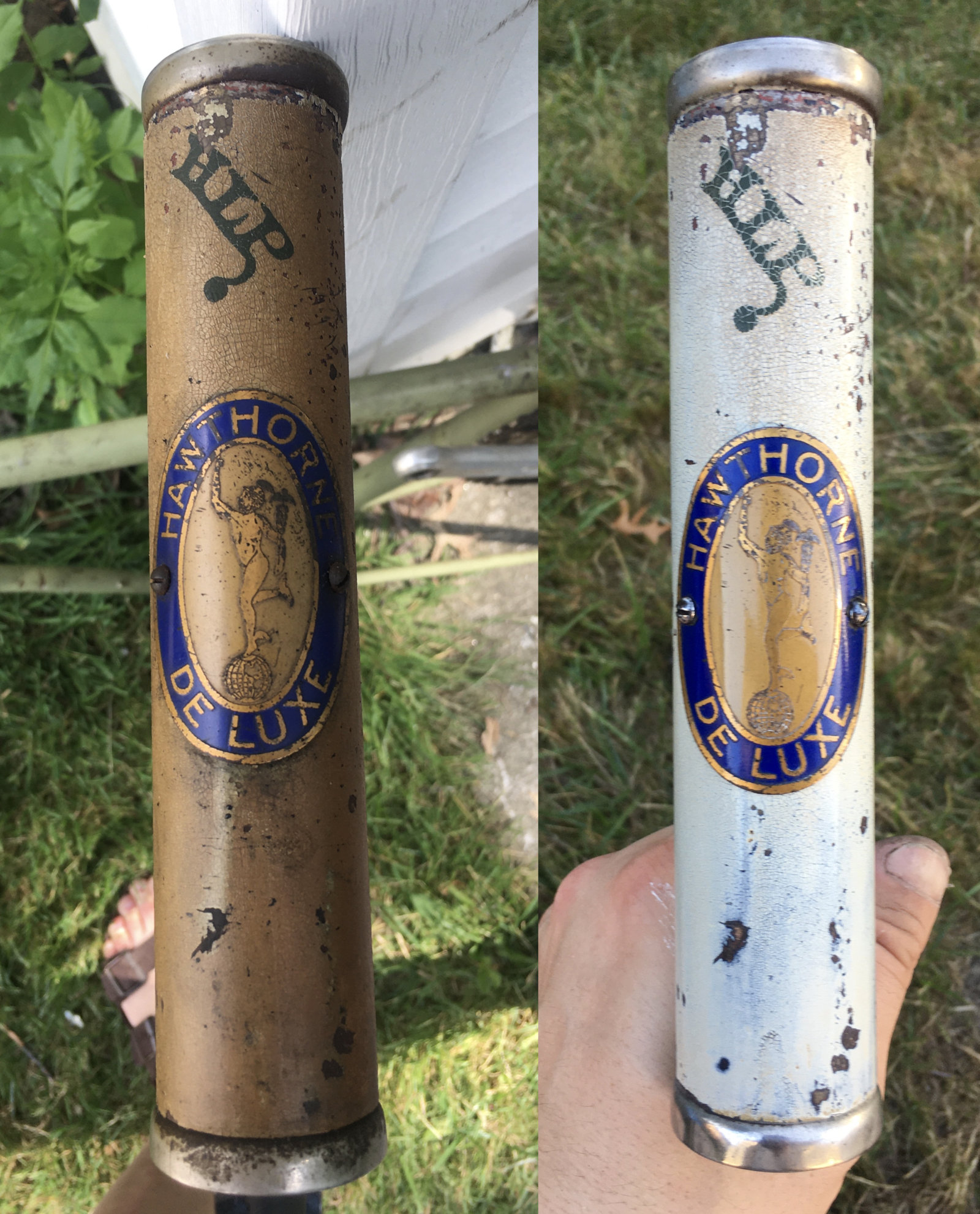 I'm offering up an amazing, original, 1917* Hawthorne DeLuxe that I documented in depth here. It has been a great learning experience, and I've put a ridiculous number of hours into it, and with just a little more work, someone is going to have a lovely bike.

* The bicycle as it came to me appeared entirely original. I collected catalog illustrations of the bicycle between 1916 and 1932. The closest match I was able to find was 1917. Given that it was not an exact match to any of them, and that the serial number was only a single letter, N, I constructed a fictional narrative to inform the build and the reasoning behind it: 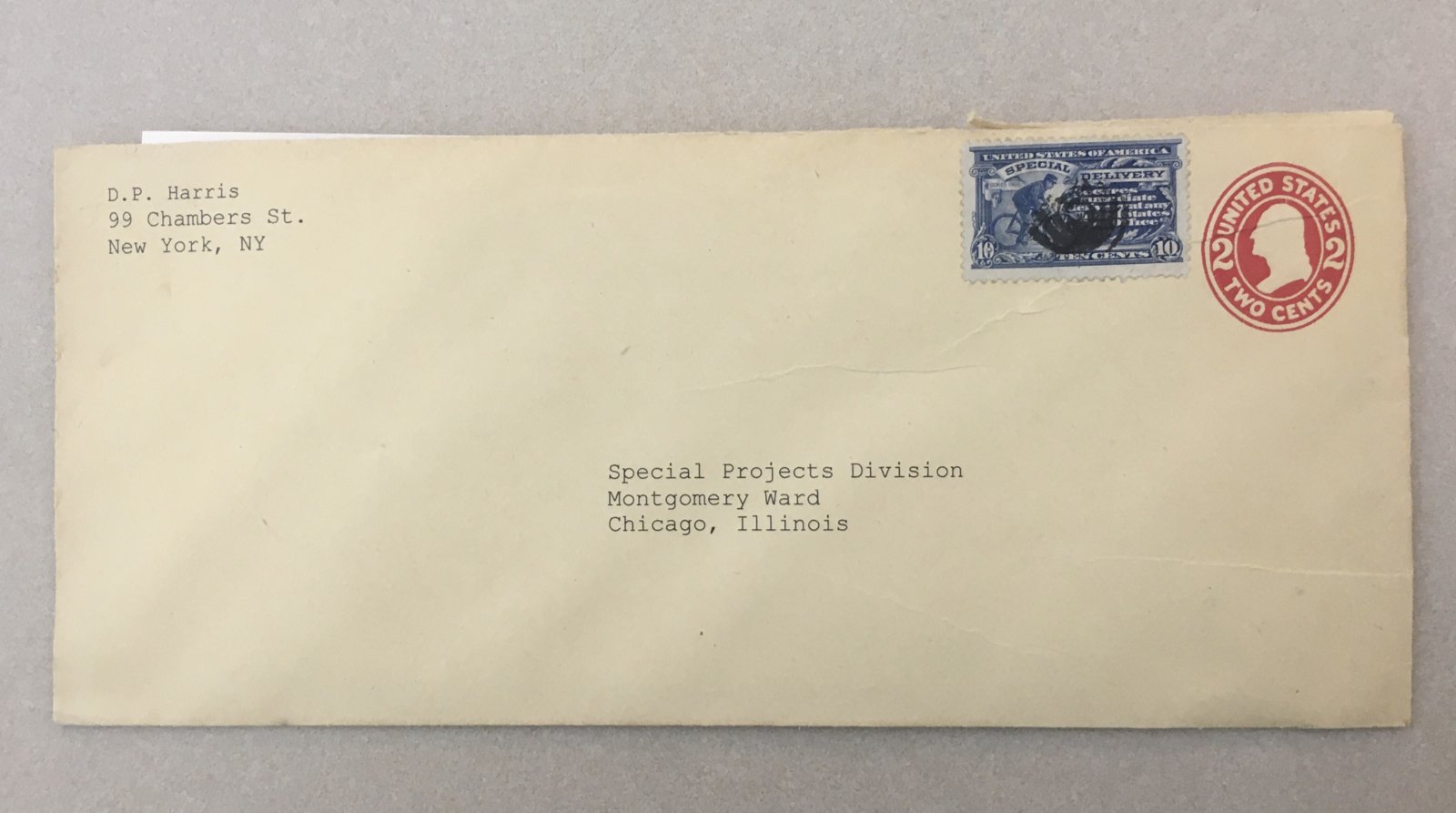 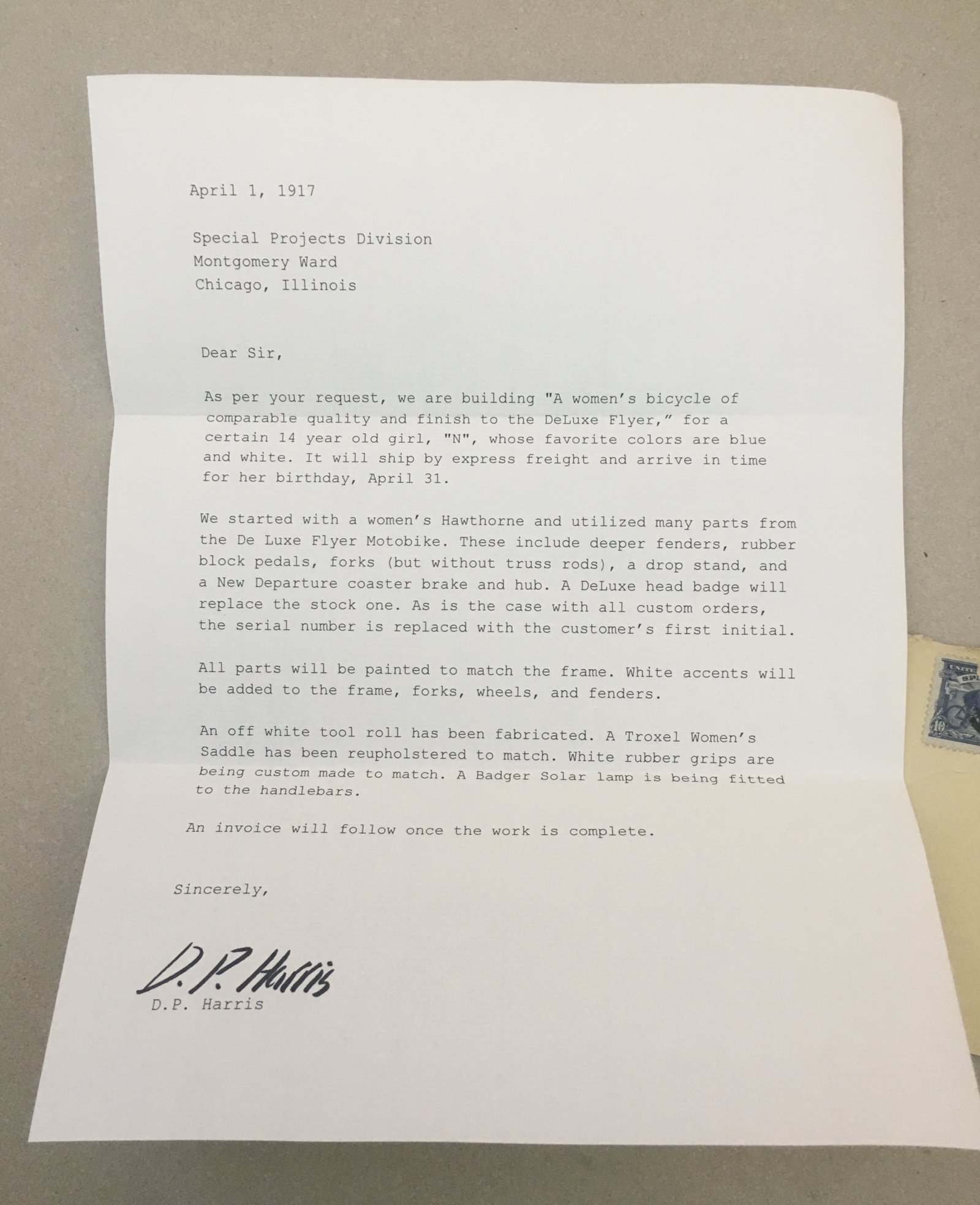 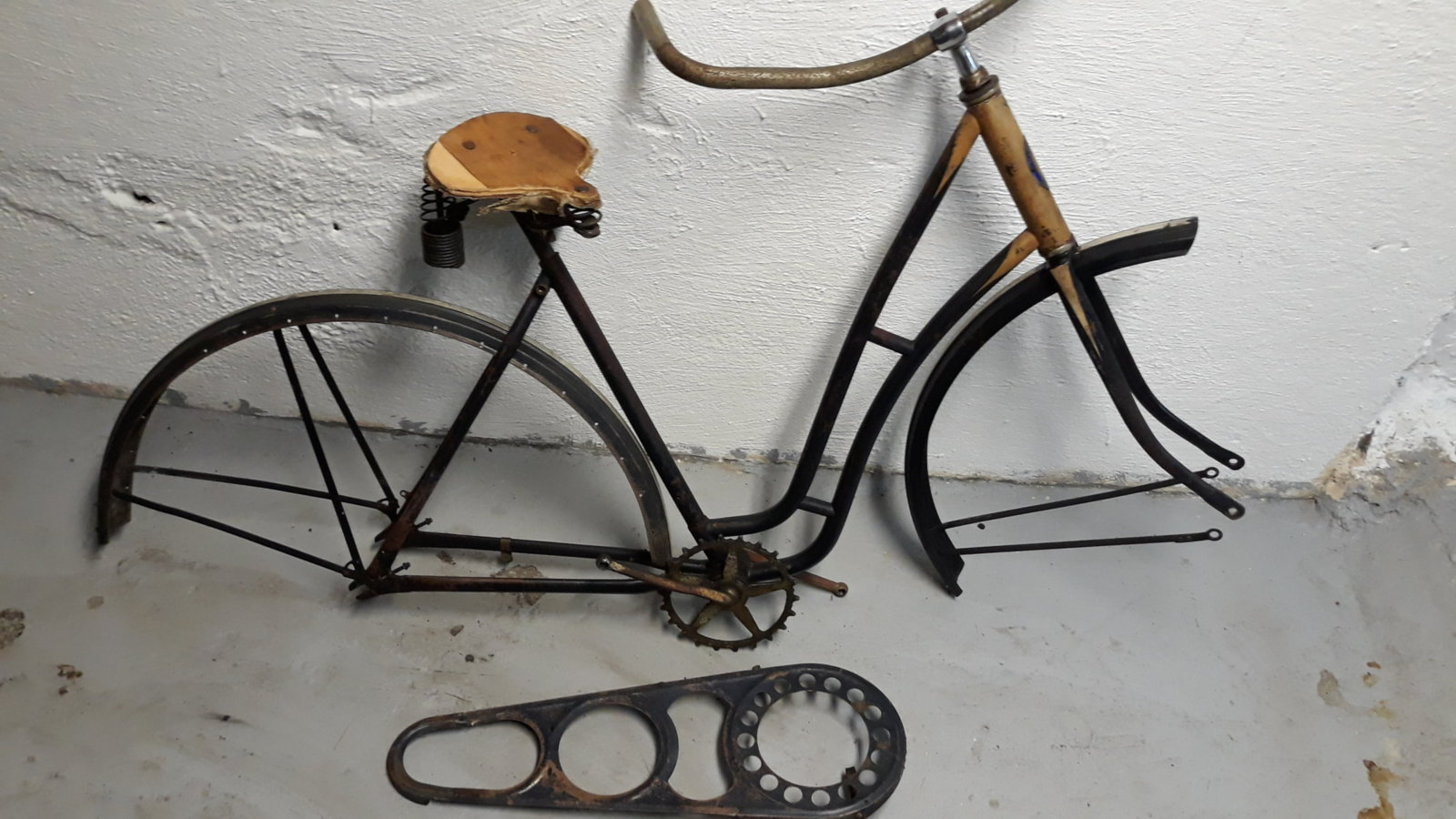 This is what I started with.

The results you see are the product of hours and hours of polishing and cleaning. The chain, not picture above, is the original Diamond. The condition of it, after heavy cleaning, speaks to how well the bicycle was cared for and how little use it received.

Parts I acquired and installed:

The only items that need to be purchased to bring this bicycle together are a couple screws to hold the chain guard onto the frame, inner tubes, rim strips, spokes, and nipples. The bicycle is now being offered 100% ready to ride.

In addition to the bicycle, you also receive quality printed copies of the 1917 and 1919 Hawthorne bicycle catalogs, as well as other documentation.

The cost to acquire the parts for this build is substantial - the New Departure Model A hub alone cost $100. It deserves to be finished, and I cannot wait to get it to someone who can do that. I am happy that I can send it off to a new home. 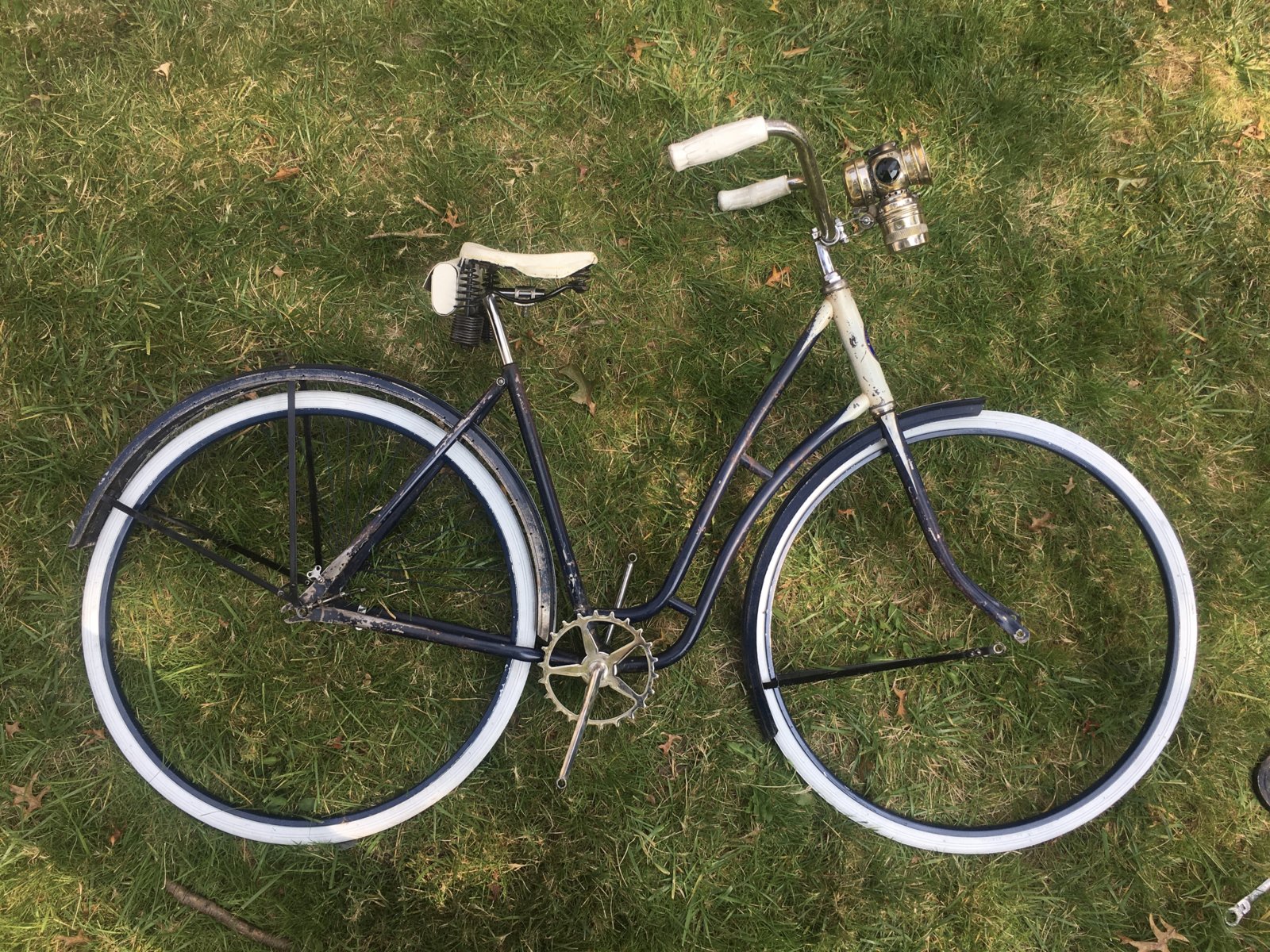 Beautiful preservation job and bike. What method did you use to bring back that white paint? Those Duro tires look great and really fill in the space!

gkeep said:
Beautiful preservation job and bike. What method did you use to bring back that white paint? Those Duro tires look great and really fill in the space!
Click to expand...

Thank you for the kind words.

For the paint, I tried various power means - on the underside of the fender so it would not show - buffing wheels / discs on an angle grinder, bench grinder, drill, and Dremel. All were too aggressive. I ended up going with rubbing compound, applied by hand, followed by polishing compound, also applied by hand. It took a good while, but I think that the results are worth it.

I used an automotive wax to protect the nickle plated and raw steel parts. I tested it on the paint and decided that it made the wear and tear to the paint more obvious, so I elected not to use it.

There was some paint on the head tube that was barely hanging on. My judgement was that it was better to bring out the white there and lose a little bit of the paint than to leave it as it was. If one wanted to spend more time here, I would suggest taking artist's gouache, in white, with a super fine brush, to make the paint losses less visible. (Gouache is water soluble, so could be removed in the future if desired.)

When I was working on the blue paint, I tried to give myself a bit of space between it and the white. It would be interesting to carefully test masking tape over the white to see if it would be possible to bring out the blue while placing less risk on the white.

As for the wheels, thank you.

I think that the 27" road bicycle wheels of the 60s-80s represent an excellent value as replacements for 28" bicycles. I used 27 x 1 1/4 wheels due to tire availability. If one could get 27 x 1 3/8 tires readily in white, I would have gone that route.

Chris - keep it for a year at least then sell it. I have some idea for how much work went into this old bicycle.

Balloonoob said:
Chris - keep it for a year at least then sell it. I have some idea for how much work went into this old bicycle.
Click to expand...

That's fair, but to be honest, it just isn't the bike for me. I've really enjoyed the build process and all of the involved research, as well as all that I have learned, but, because of my size, it just doesn't live up to the hype that I have built up in my head.

I'm realizing that there are some bikes where the greatest joy is in the build, and some where the real fun is in the ride. This one is the former.