My first time in a forum. Bought this bike at auction a couple years ago. Still not for sure what it is or what year it was made. Seat, grips, tires, of course, are not original. I do have the chainguard and kickstand somewhere. I wanted to share and learn more about it. Thank you for any replies. 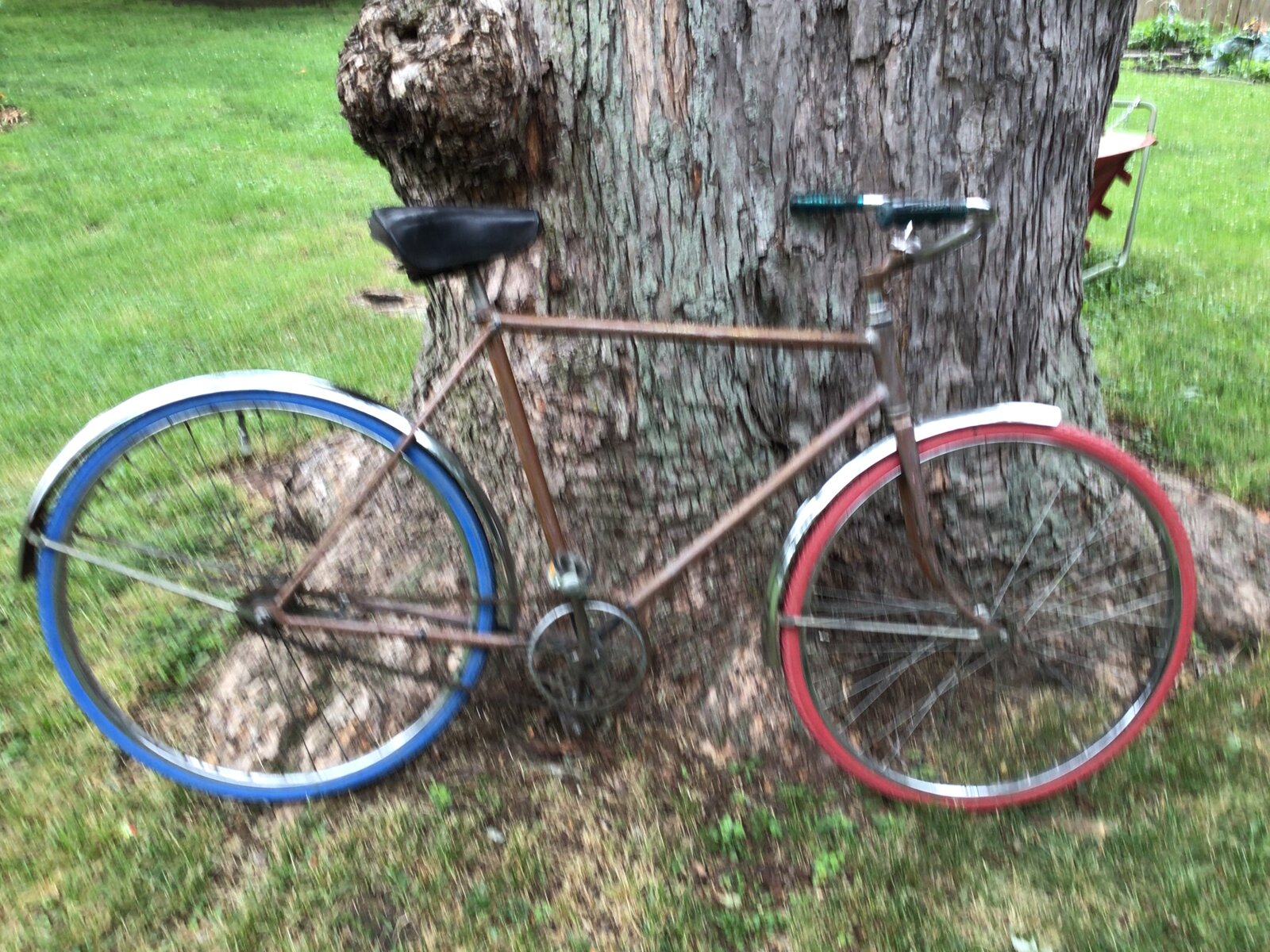 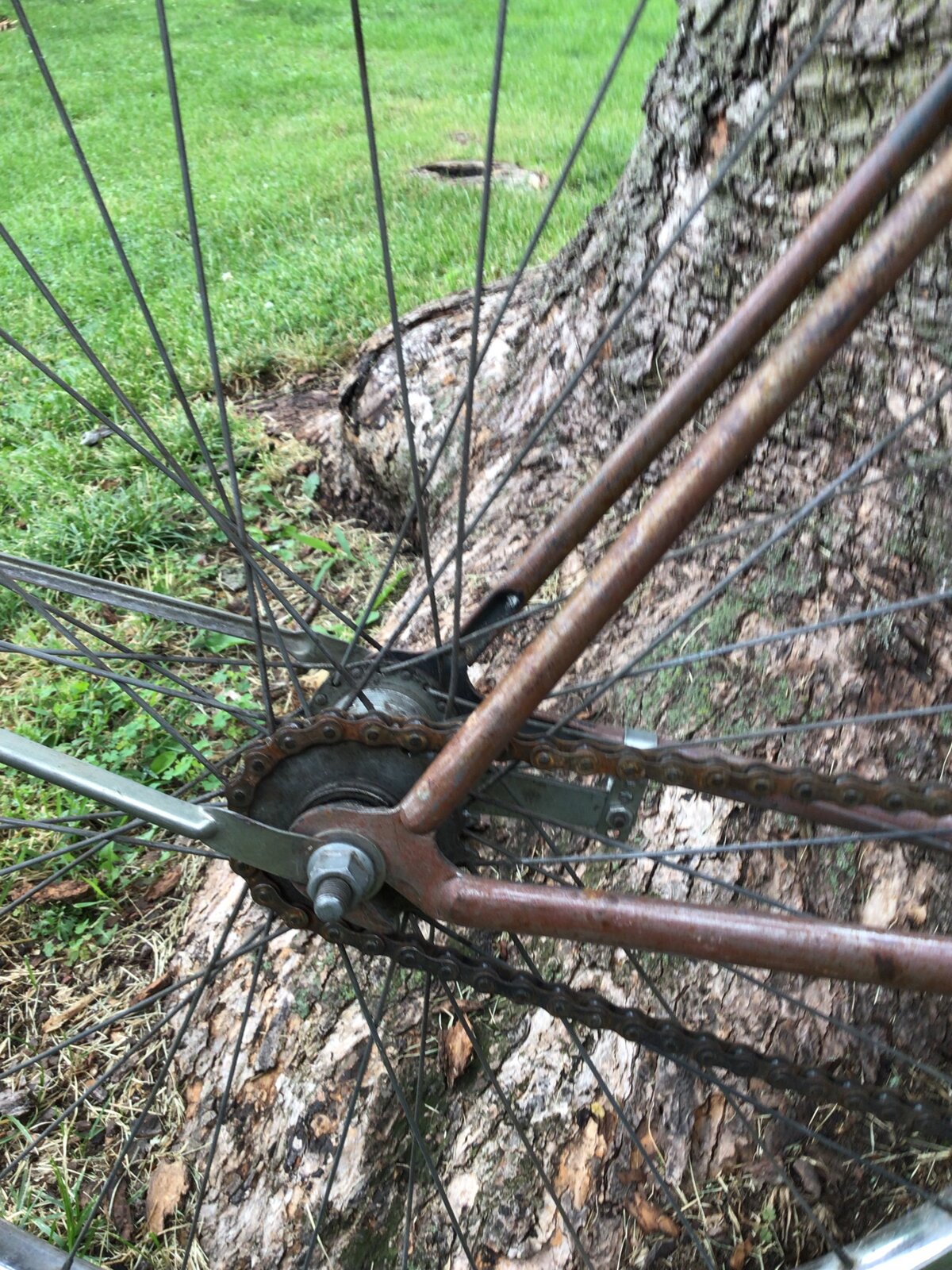 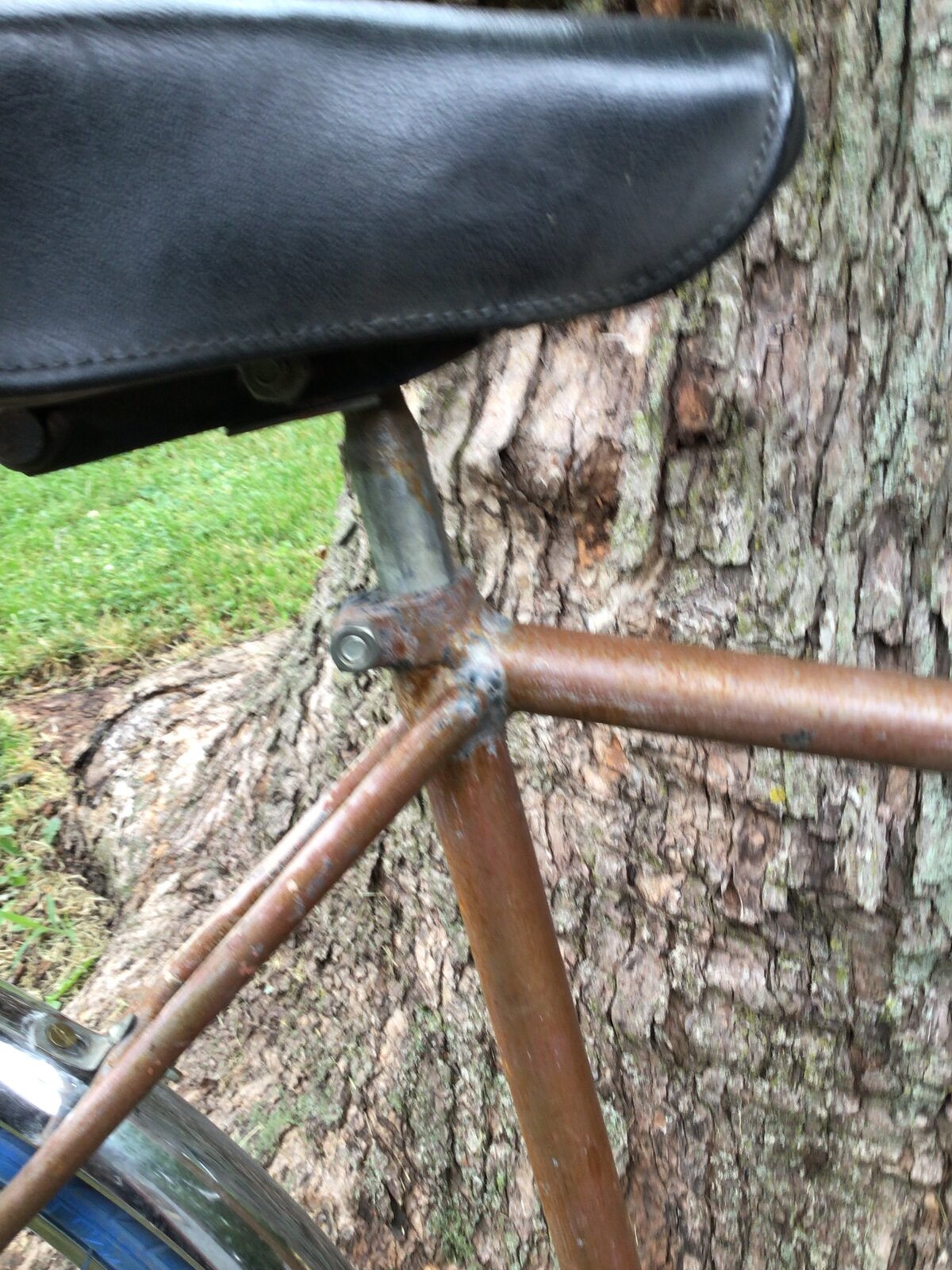 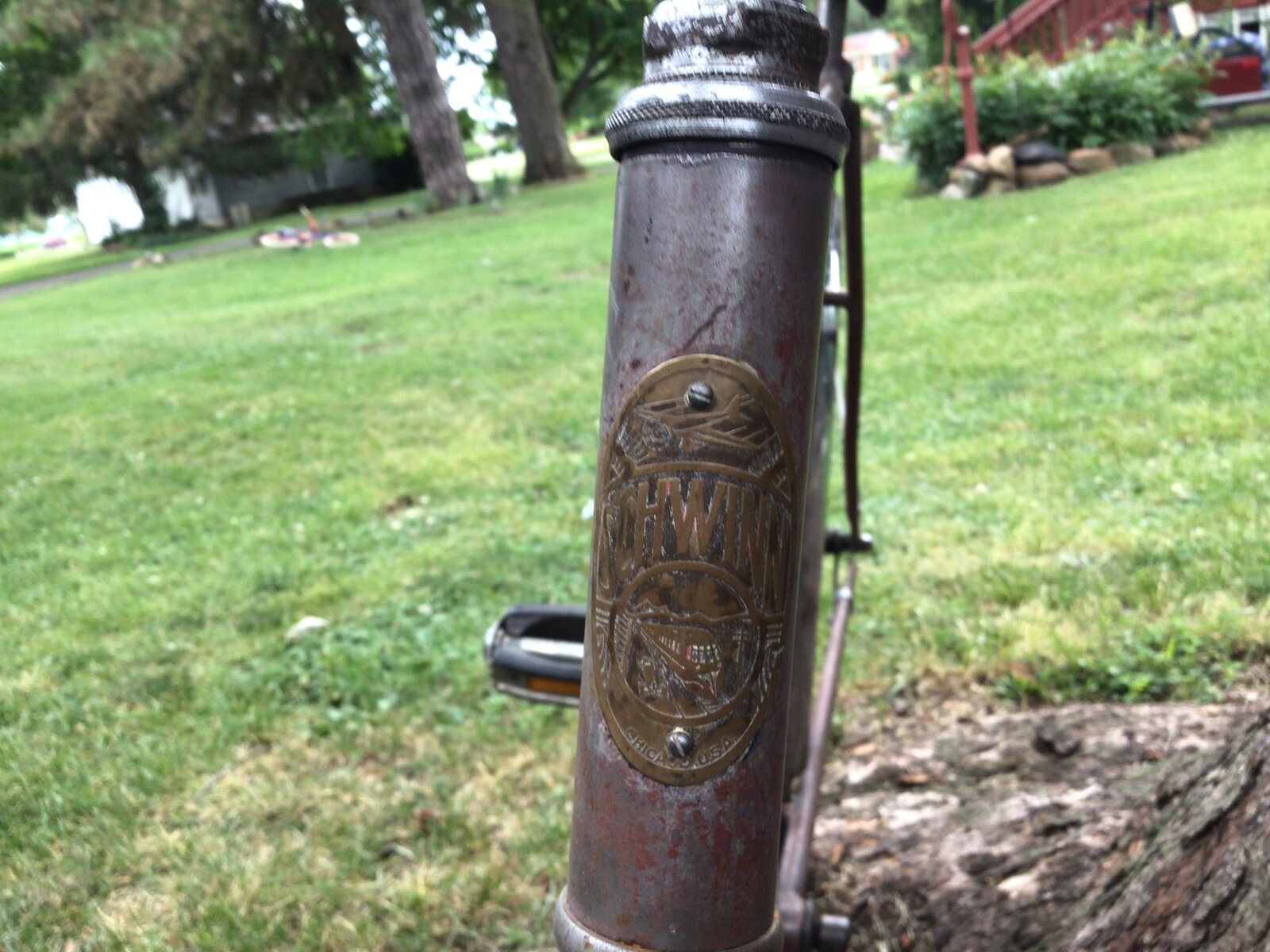 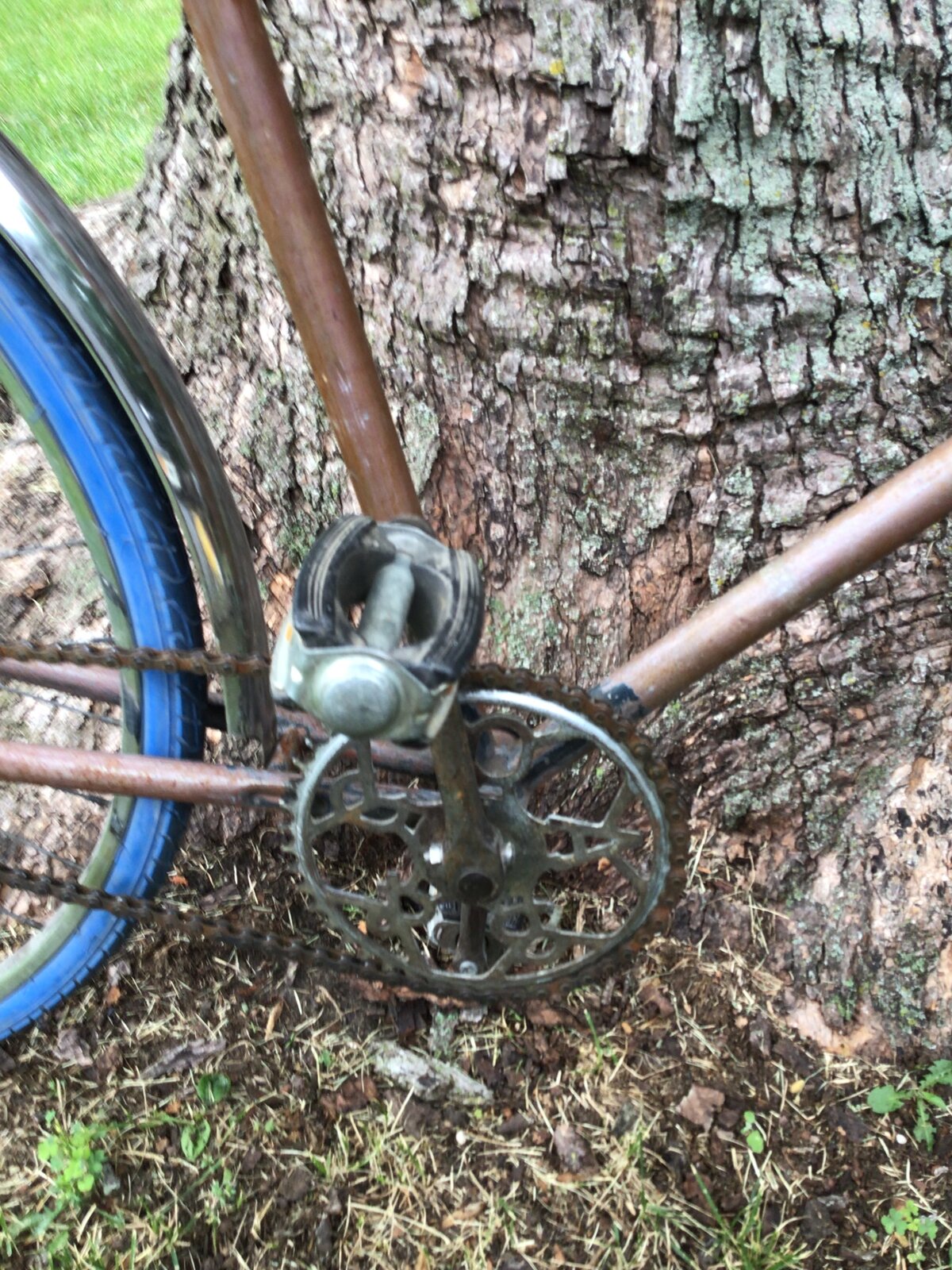 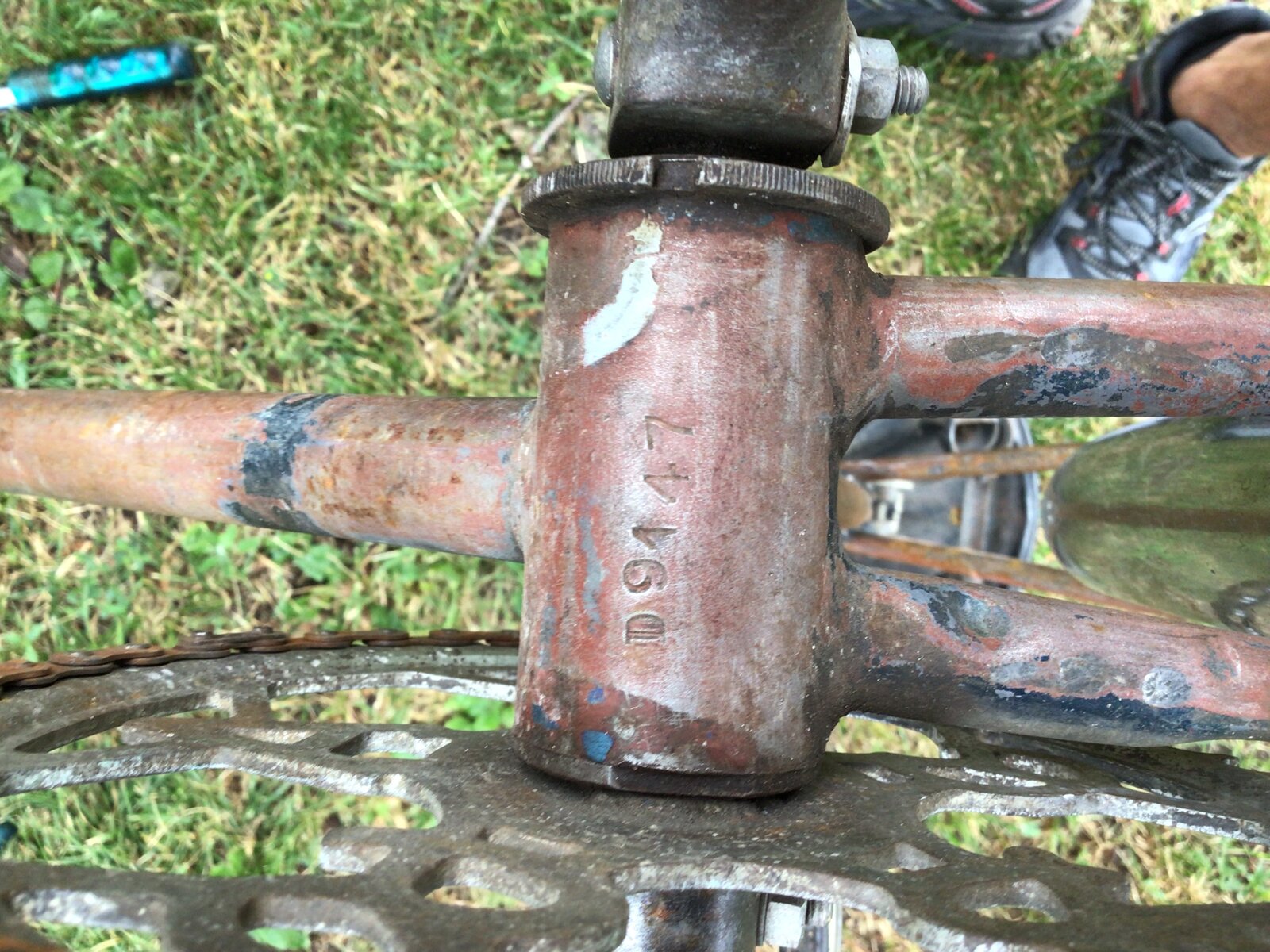 At first glance, I'd say a pre-war Schwinn New World, but the paint's been stripped and a lot of parts changed. @Miq @GTs58
B

Oilit said:
At first glance, I'd say a pre-war Schwinn New World, but the paint's been stripped and a lot of parts changed. @Miq @GTs58
Click to expand...

Thanks for the reply. That is what I have deducted it to, but I didn’t think the forward facing dropouts were until after the war.

Bikeymikey said:
Thanks for the reply. That is what I have deducted it to, but I didn’t think the forward facing dropouts were until after the war.
Click to expand...

Most Schwinns didn't get the drop outs until after WWII, but the lightweights were the exception. Check out @Miq's list - the first year (1939) had the forks, 1940 on were drop-outs:

Wartime Schwinn New World Bikes - We Know You Have Them - Tell Us About Them!! | Lightweight Schwinn Bicycles

Welcome to the Cabe.

Looks like a 1940 New World. All the ones with the three piece crank have hand stamped numbers and the one piece crank shell has machine stamped numbers. I don't recognize your fork though, appears to have a flat sloping shoulder. Were you getting ready to paint it at some point?

@Bikeymikey Cool New World Klunker! I’m with @Oilit and @GTs58 in thinking it’s a 1940 D serial New World frame with 3 piece crank. Do you have any guesses for the original color?

This hand stamped D serial is a good example of the I overlaid with O stamping we’ve seen on some other bikes like @vincev ’s D serial New World. Can be confusing looking on some bikes.

It looks like the D is a composite of two stamps.

@Miq That is one beautiful D stamped by a real artisan! A zero and then a perfectly placed letter I, just unreal! 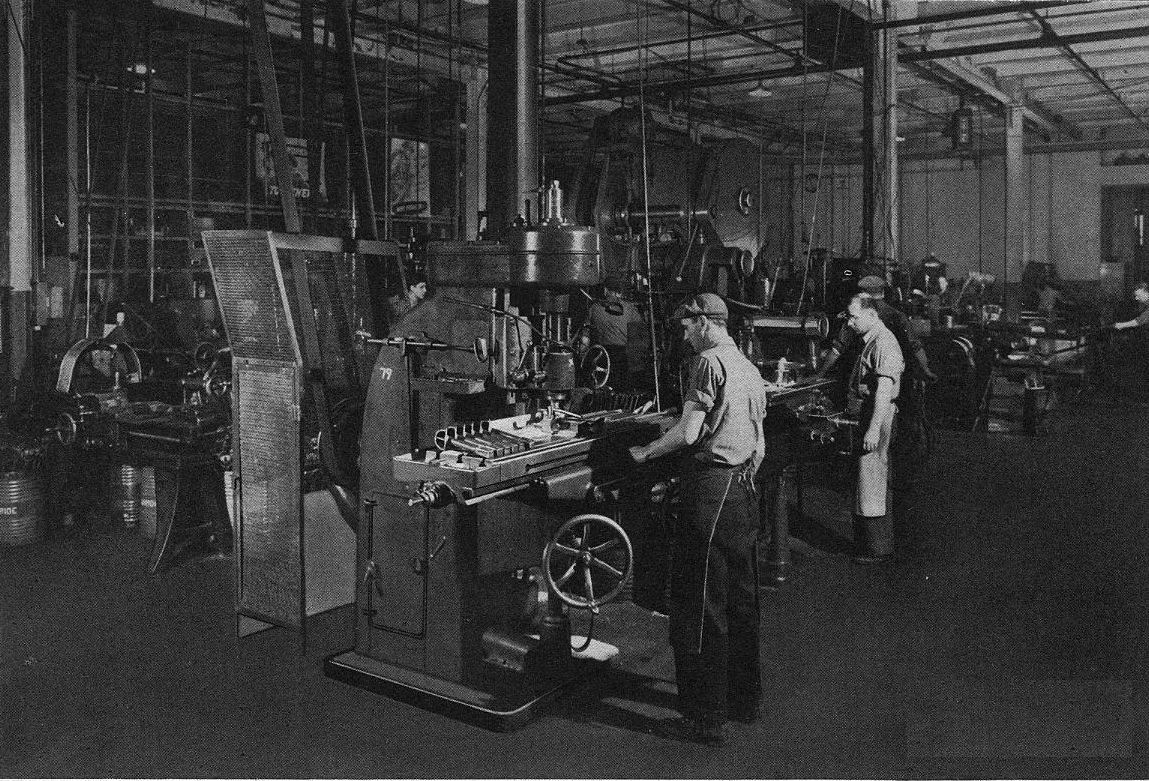 They had production down to a timed science in terms of spending more time on cleaning and finishing the more visible areas of the frame. The brazed joints around the bottom bracket, and later the electro forge joints behind the bottom bracket, are often rougher than other joints on the frame in more visible locations. The serial number on the bottom bracket was often roughly stamped because it was generally not a visible part of the bike. And on the electroforged bottom bracket shells, the stamping might have been more regular than the three-piece crank shells, but the seam where the weld took place was often not polished down. "Time is money", as they say. The more visible areas were often well-cleaned and polished to present a smooth frame where appearances counted more for the buyer.
Last edited: Jun 24, 2021

Agreed on their desire to spend labor dollars and focus attention on the parts of the bike that the customer cared the most about or that were the most visible to them. But something still doesn’t add up with the difference in stampings between the 1 piece crank bikes vs the 3 piece crank bikes. Schwinn is investing in automation to reduce labor hours and speed production. The BB are starting to get electroforged and machine stamped for the 1 piece crank bikes around this time. But for some reason they are still sending the 3 piece crank BB shells down a line with guys using hand stamps to overlay an I and an O stamp to make a composite D. That doesn’t jive with the automated, labor reducing mind set we see them taking. There’s got to be something else going on. Something we don’t know about or understand yet.
You must log in or register to reply here.