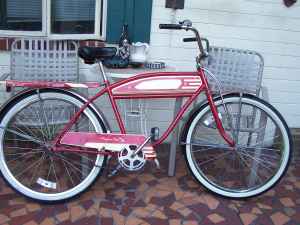 Can anyone help me ID this old Western Flyer>? Year and who made it? thanks
Tom

late 80's, made by Aerofast Bicycles. they also did the columbia re-pops. they're really well built bikes, made in USA, and the frames and forks are guaranteed for life. they used mostly american made Wald parts, and Shimano hubs. no cheap chinese stuff.

they still make the same bike, more or less, and they ain't cheap.

i bought one for $120 in almost new condition. i've seen them advertised for $500, but i think they average from $150 to $250, depending on location and condition (and in this market.)

they made one with a springer that was worth a little more.

they're great, heavy duty cruisers, and a million times better than a walmart huffy, but they're just not worth that much in today's economy.

Are there any number to tell what it is?
S

I'm interested in knowing, because a friend might give me one. Would like to know if its an 50s bike or a repop. Either way I wont refuse it.

it's pretty easy to tell the difference between a re-pop and an original. for one thing, the bike doesn't look anything like any western flyer ever made. the frame's different, forks are different, everything's different.

but if you're not that knowledgeable on older western flyers, there's plenty of give-aways that'll tell you it's not from the 50's.

if it's all stock, the re-pop will have reflectors on the pedals, stainless phillips screws on the tank and chainguard, decals on the tank, chaingaurd and frame (originals woulda been painted, and have a metal headbadge.)

also, it's gonna have a shimano coaster brake, instead of a bendix or some other american made one.

not to mention, it's pretty rare to find a 50's western flyer in pristine condition, no rust, not even any paint fade. that's the biggest give-away right there.

but like i said, they're great bikes. they're actually much better built that an old western flyer. they have heavy duty 12g. spokes, kmc chains, and great chrome.

and they make awesome motorized bikes...