I thought there was a thread already about the last of the Chicago Schwinns but I could not find it. My apologies for creating a new thread on the topic.

So, I was recently going through some old photos on a USB and came across this bike I bought and sold in 2013. I do not recall the exact SN but when I looked it up it was either a very late 83 or early 84 - slightly before whenever the Chicago plant was said to have closed - I remember that 100%. Can anyone peg this as a Chicago Schwinn by the pics? It appears there had been paintwork and those decals were atrocious but thoughts? I also cannot tell if the rims are stamped S2 or knurled.

Any help would be appreciated to know if I had one of the last Chicago cantilevers.

The bike was pretty cool and rode great but nothing phenomenal. At the time I was living in an upstairs apartment with minimal room so if I didn't LOVE it, I sold it. I bought it as I was passing through to visit family in central Illinois for Thanksgiving 2013. The thing about that trip was the weather. Have any of you been in tornado weather? I mean the distinct feeling before one hits? I have been twice and this was one of those times. I left IL a day earlier than I was going to and sure enough, the next day was the famous Washington, IL tornado which stuck just 30 miles from where I bought this bike. I just KNEW it... 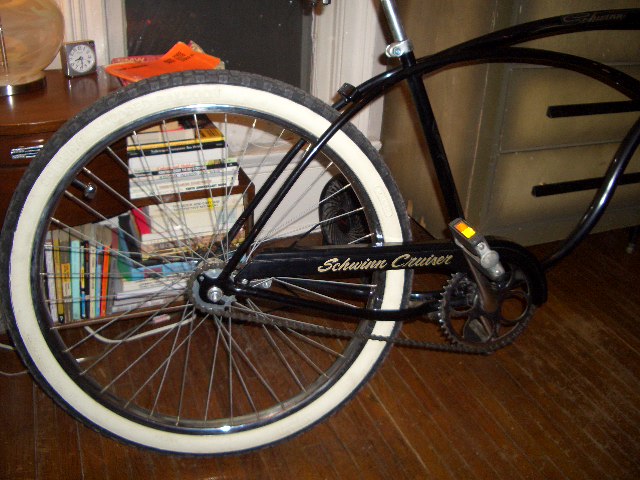 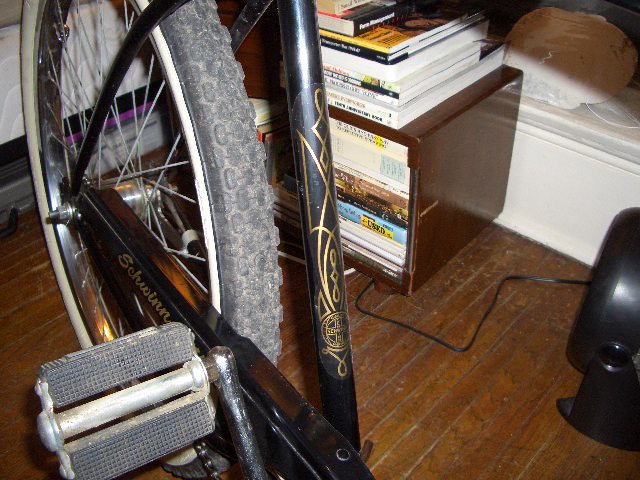 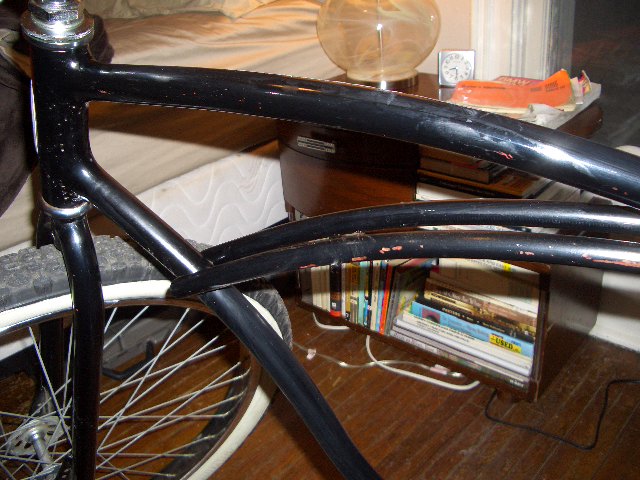 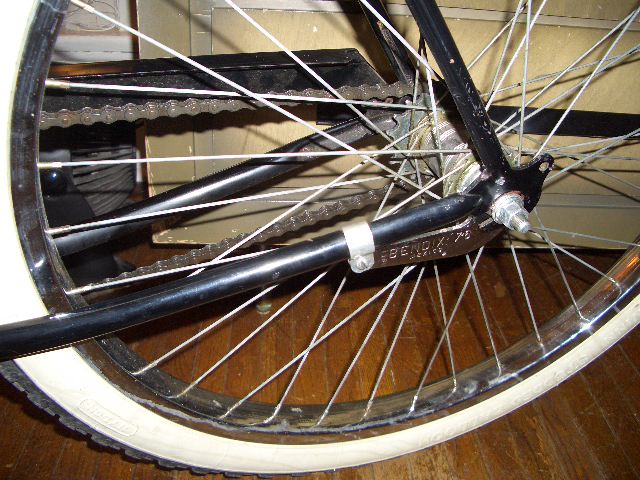 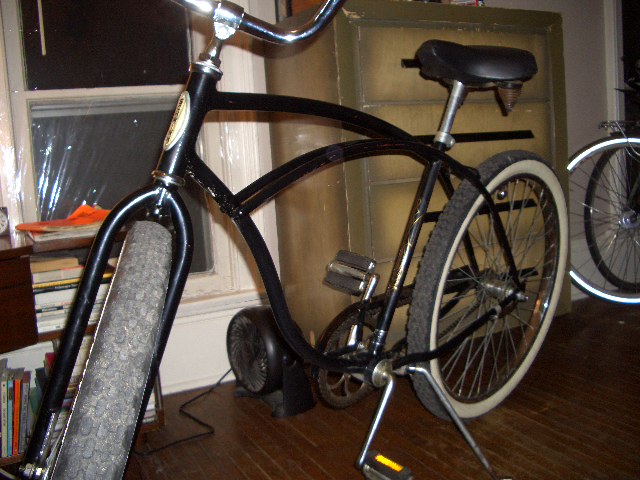 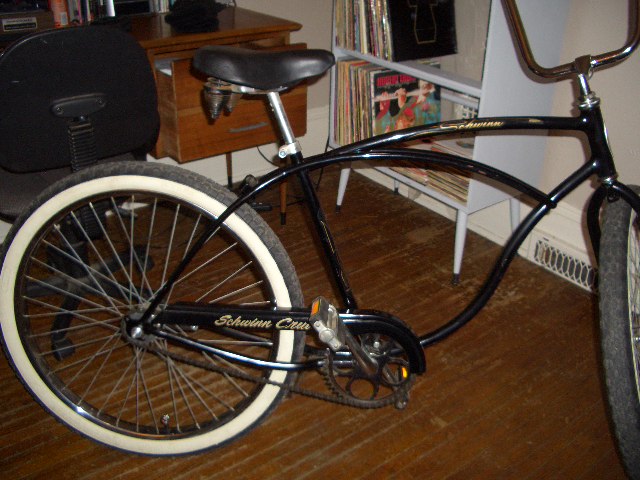 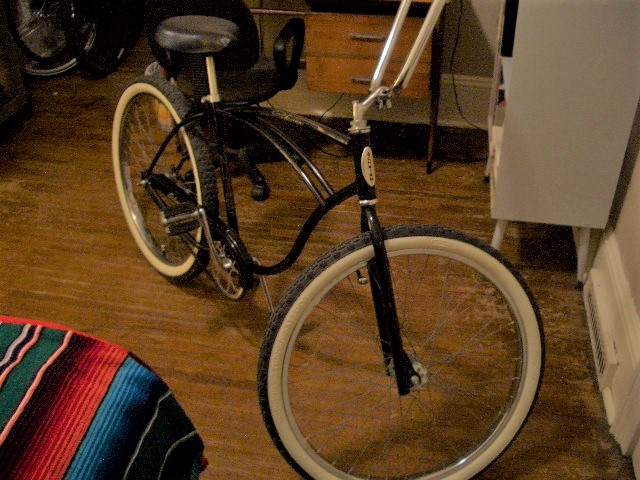 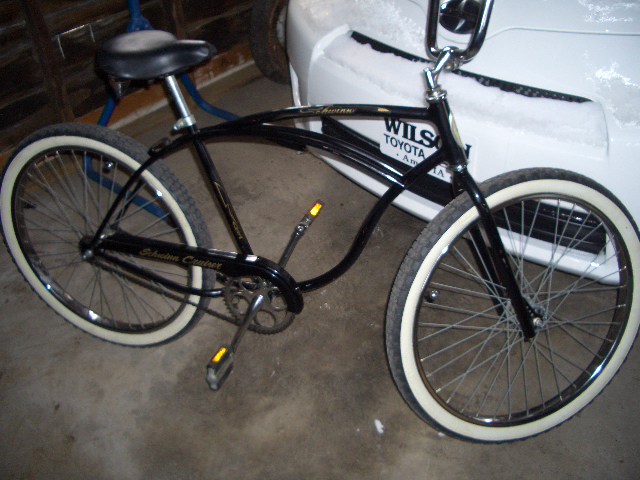 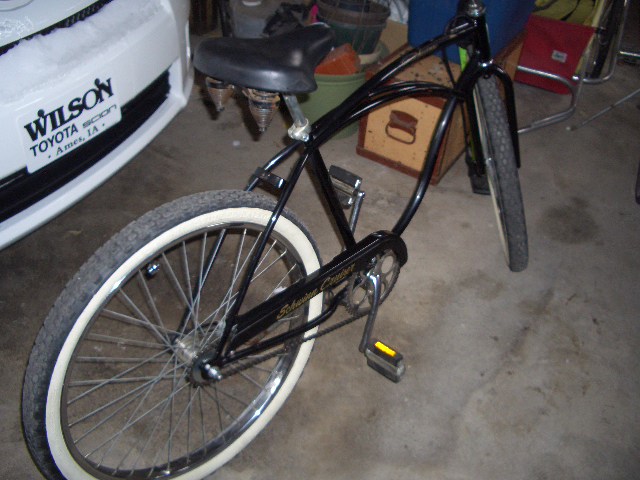 By looking at the brake bridge, chain guard mount and tips of the cantilever bars I'd say its an original schwinn.

Being a part of one of those recent threads that you refer to, this one appears to be Chicago based on the things that @Rusty Klunker points out. Those are clear and distinct differences between it and my late 84.
Last edited: Jan 23, 2021

Black and gold.. nice combo for sure. By the look of the larger one piece sticker type decals on the top tube and seat mast I would say it was mid to late 83. 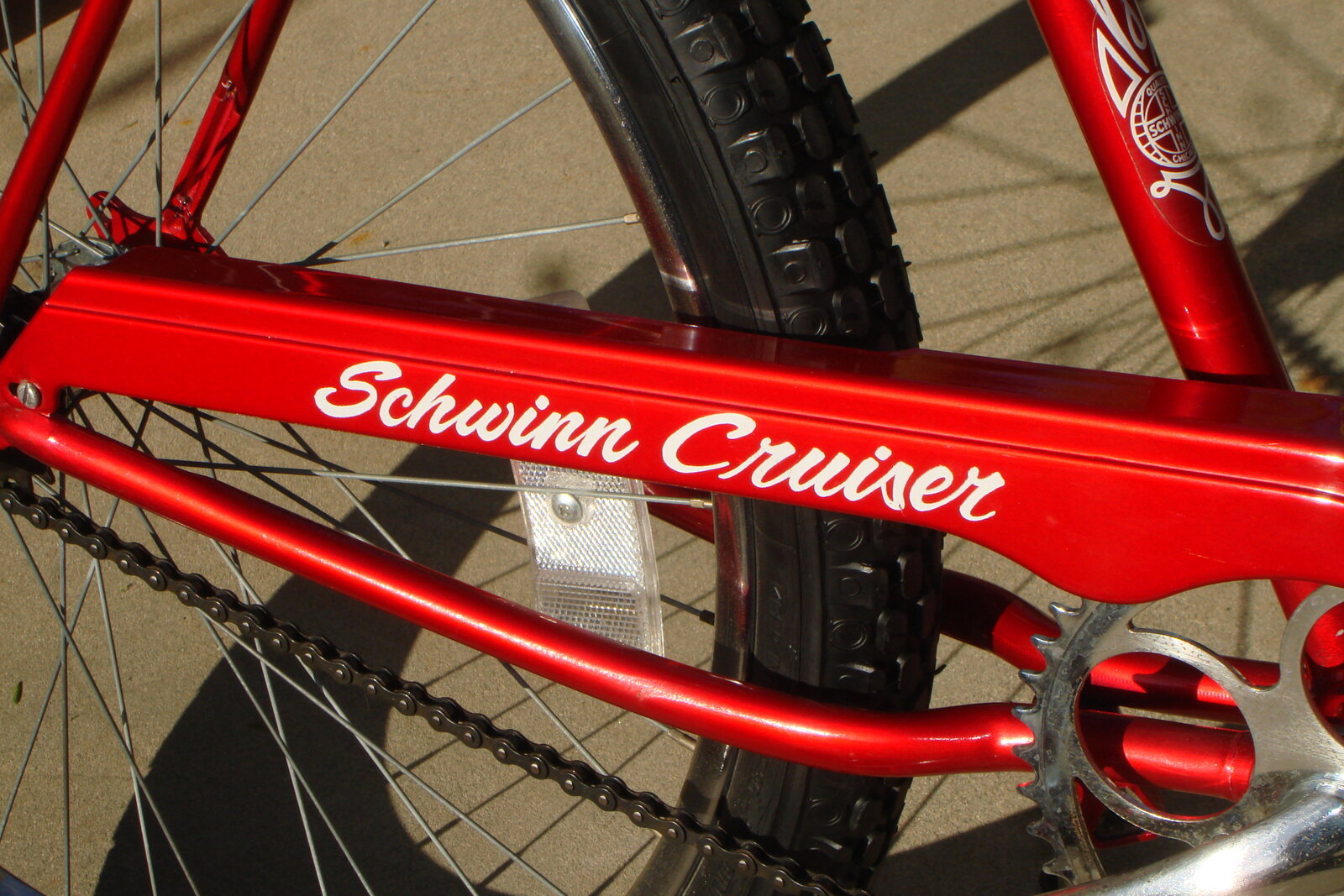 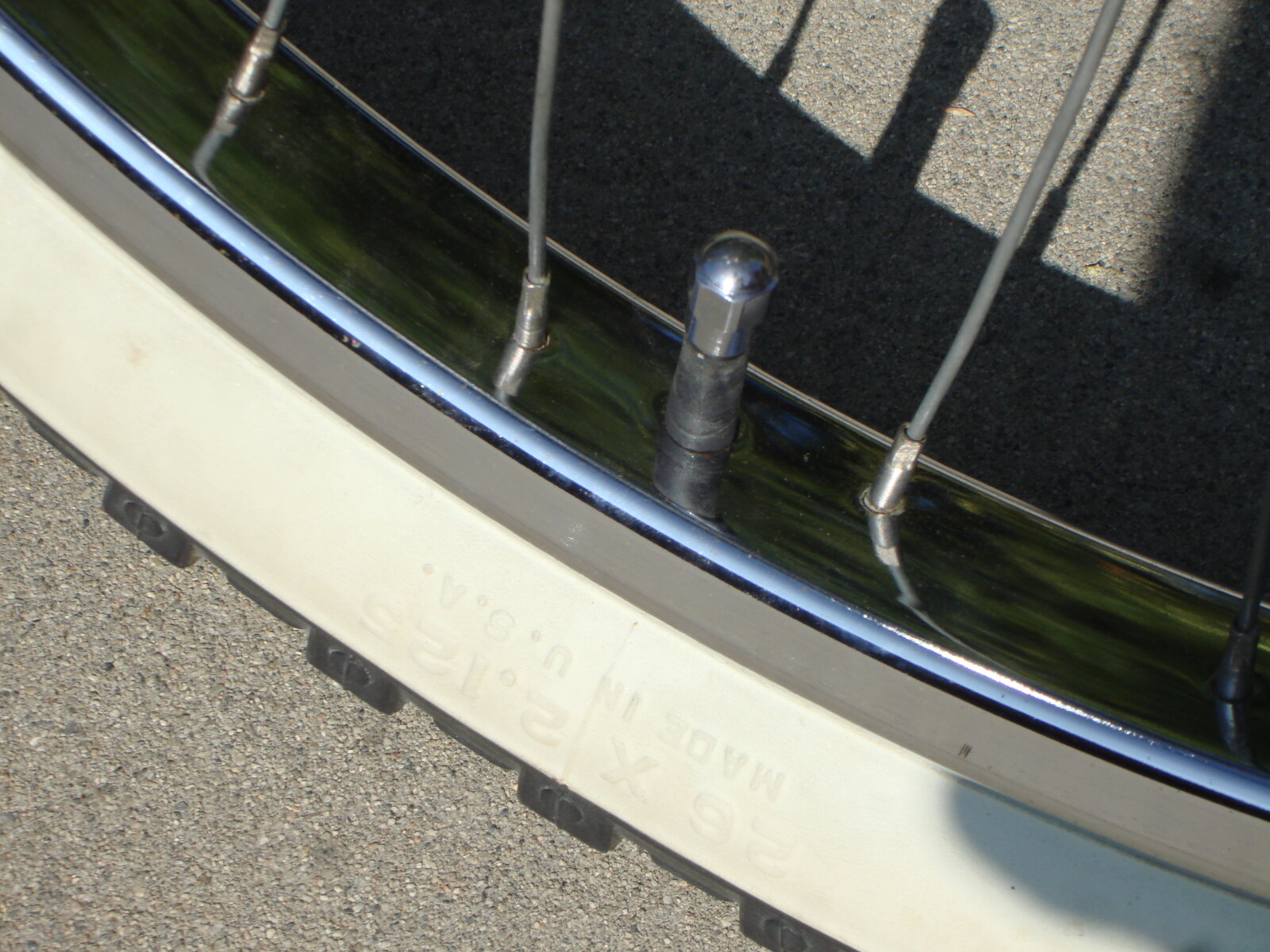 Im thinking your old bike looks like its the real deal to me.

something doesn't quite look Chicago to me, better pics of the bottom bracket from the bottom will tell!
S

mrg said:
something doesn't quite look Chicago to me, better pics of the bottom bracket from the bottom will tell!
Click to expand...


Thanks but unfortunately no bb photos on the computer...

Pretty sure these are SchiMurry's. Schwinn's frame system was sent to Murray Aprox Sept 1983 and there's a noticeable difference in the connection of lower rear stays and bottom bracket. @Metacortex https://thecabe.com/forum/members/metacortex.43802/ Points out, some years ago, in threads that are lost, how to tell the difference:

"you can clearly tell the Chicago EF frames apart from those built by Murray by the bottom brackets. The Chicago built frames have the slag rings on the chainstays near the bottom brackets plus the seam on the lower part of the bottom bracket, while the Murray built frames do not."
Moreover if it's a little sloppy looking weld at the chanstay-Bottom bracket joint, it's Chicago whereas, if clean smooth electro weld it's a Murray. This is also true on SchwiMurry's middle weight and 10 speeds such as a Continental.

There used to be photos of this but lots of info has been lost since the site up-dates 2020-2021. I think also, but not sure, those stickers verses decals are another sign.
Last edited: Jan 24, 2021

From this announcement along with some actual examples I've seen, I have to assume some of the later 1983 Cruisers had frames built in Chicago and the raw frames were shipped to Murray. I've seen Murray frames where the head tubes and joints were EF but the bottom brackets were not so those frames were most likely built by Murray. The 1984 frames to me appeared to be all Murray built when Schwinn completely shut down all Chicago production. 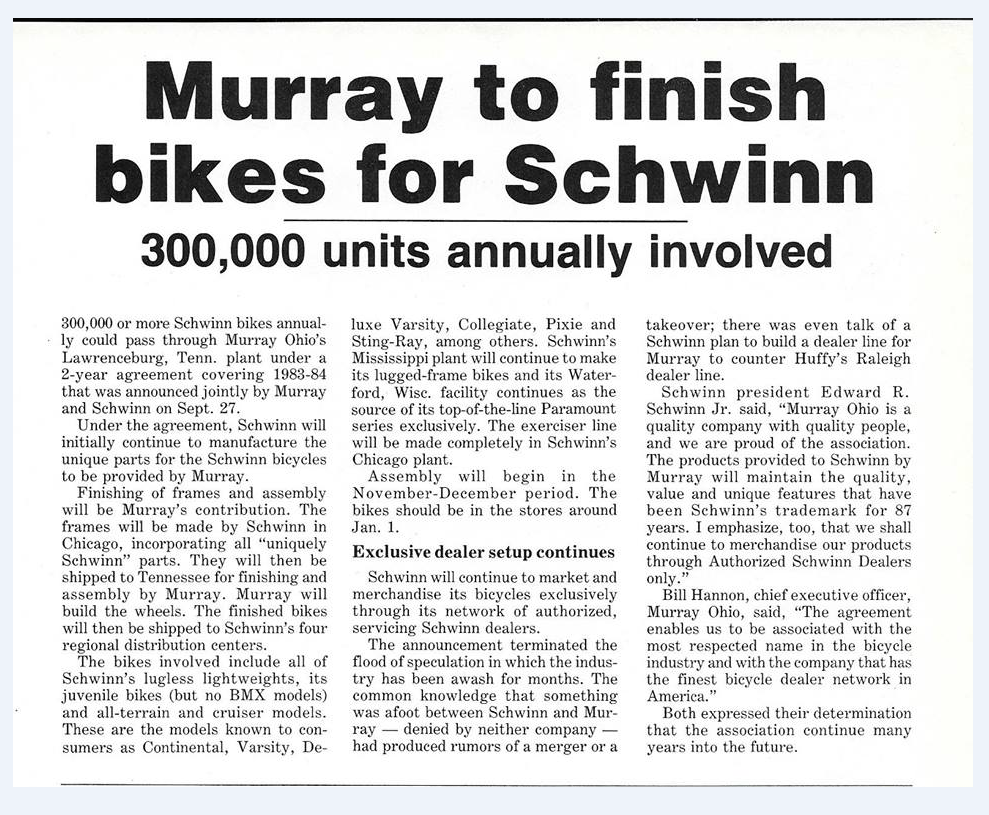 I'm going to have to take a closer look at my 83, I know it has knurled rims. 84ish had fender tabs welded on the forks and the rear brake bridge fender brace was never the same as Chicago ones 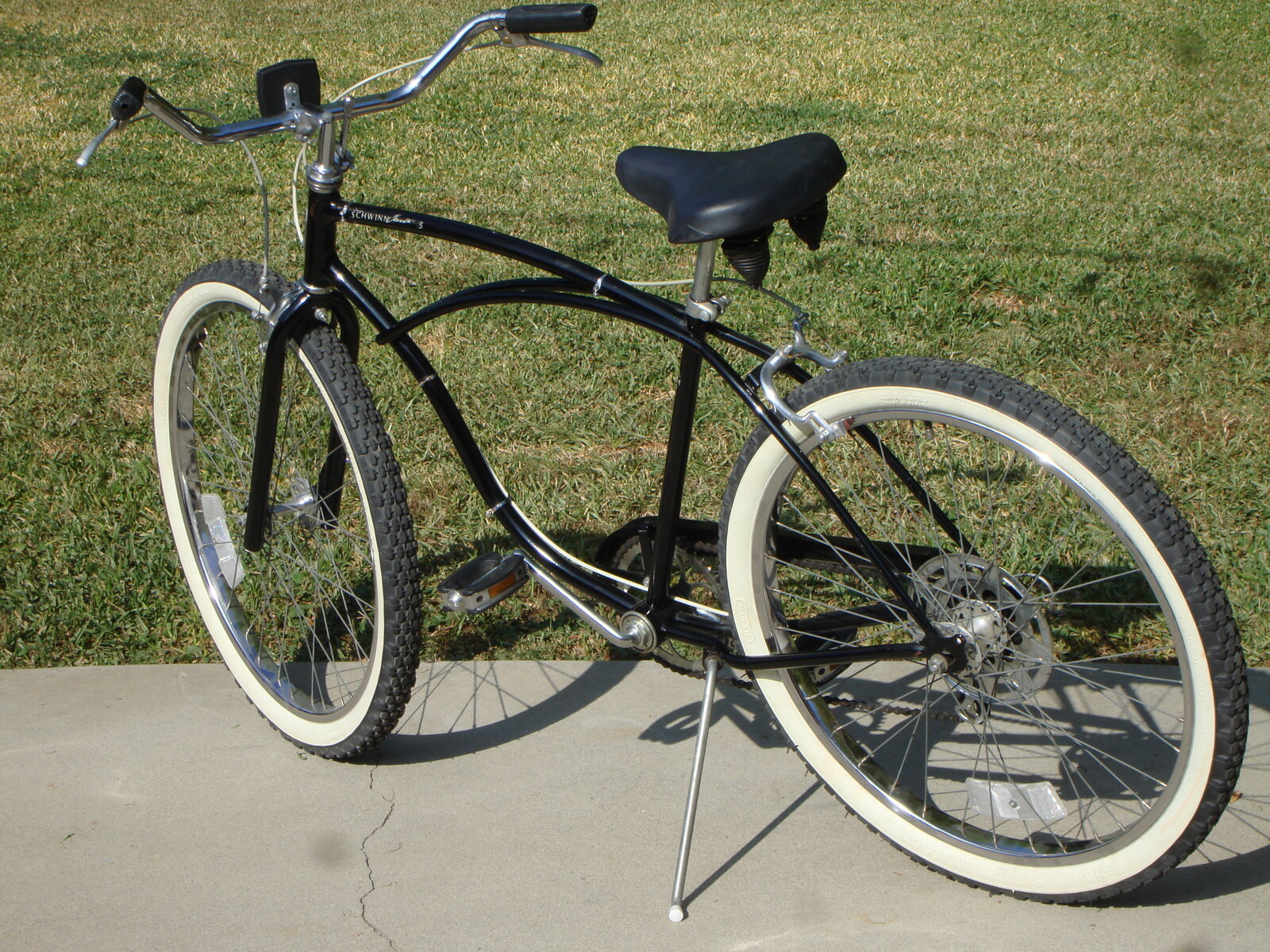 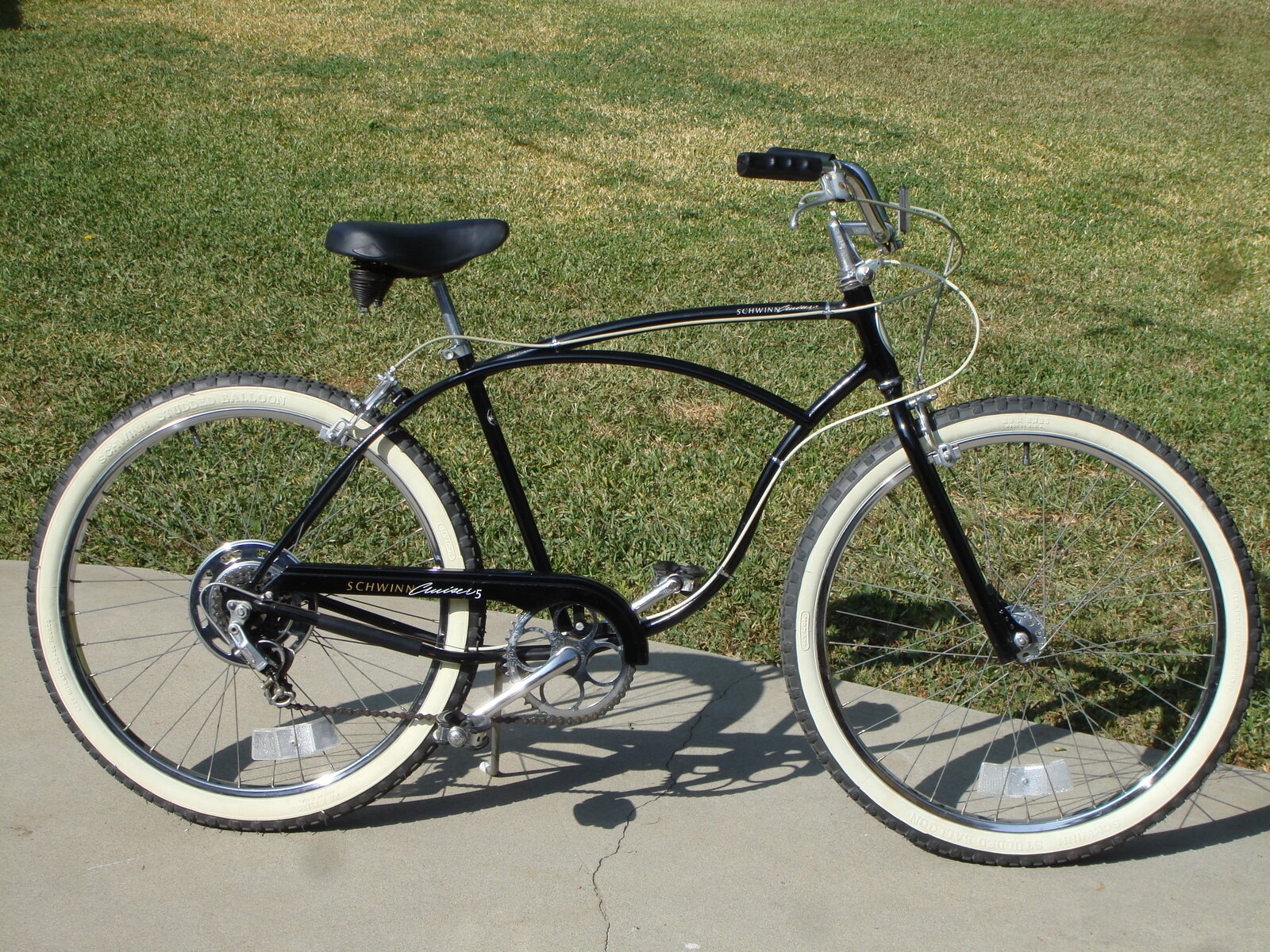 Rusty Klunker said:
I'm going to have to take a closer look at my 83, I know it has knurled rims. 84ish had fender tabs welded on the forks and the rear brake bridge fender brace was never the same as Chicago ones
Click to expand...

Rusty, check out my all original 84. Big brake bridge and no fender tabs on the fork. Im thinking 1985 was the very first year of china made with the introduction of the fender tabs and small flat brake bridge..
You must log in or register to reply here.

Pole Dancing In A Mosque.