I recently serviced a ND model D and switched to a 1/2 inch pitch sprocket. When the hub was assembled there was a dragging noise and when I compared the driver I used to the one that came from the hub there was a difference in the design. There seems to be a different milling on the 1 inch driver. I compared it to other drivers I have and only the one would work on hub I had. You can see in the pics the driver to the left is the one that works the others do not. If you look at the driver below the bearing race you will see another step in the driver above the dust cap where as the rest have a flat. It is this flat area that is contacting the hub edge. I'm confused (easily done) perhaps I missing something. I thought it was maybe 1/2 vs. 1 inch pitch but the other 1 inch I show also have the flat spot. I may not be explaining it to well so bear with me. I realize I could install the 1/2 on the other driver to solve problem and that is another task I. have never done but I would like to figure out what exactly the problem is. Thanks for any help 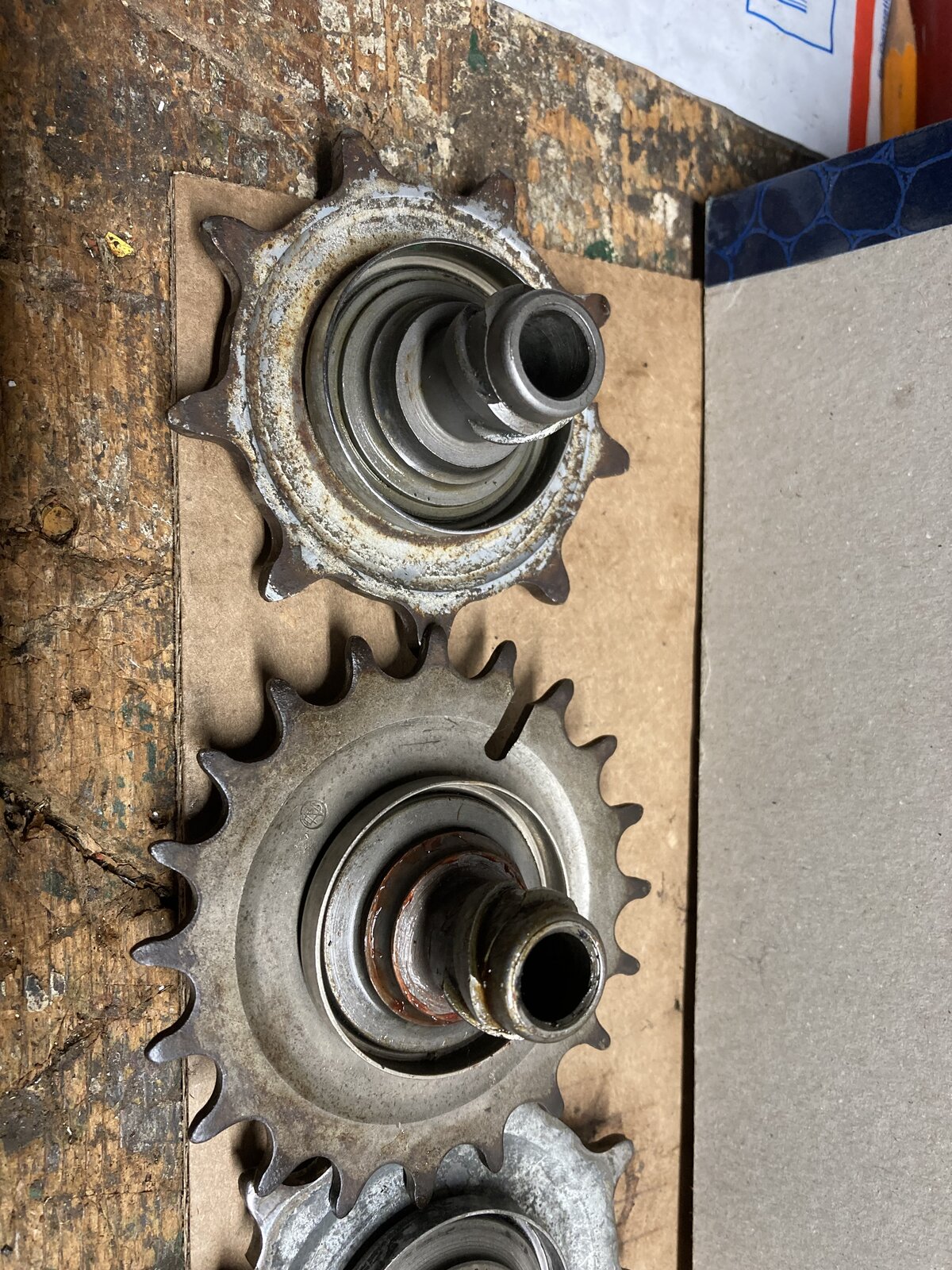 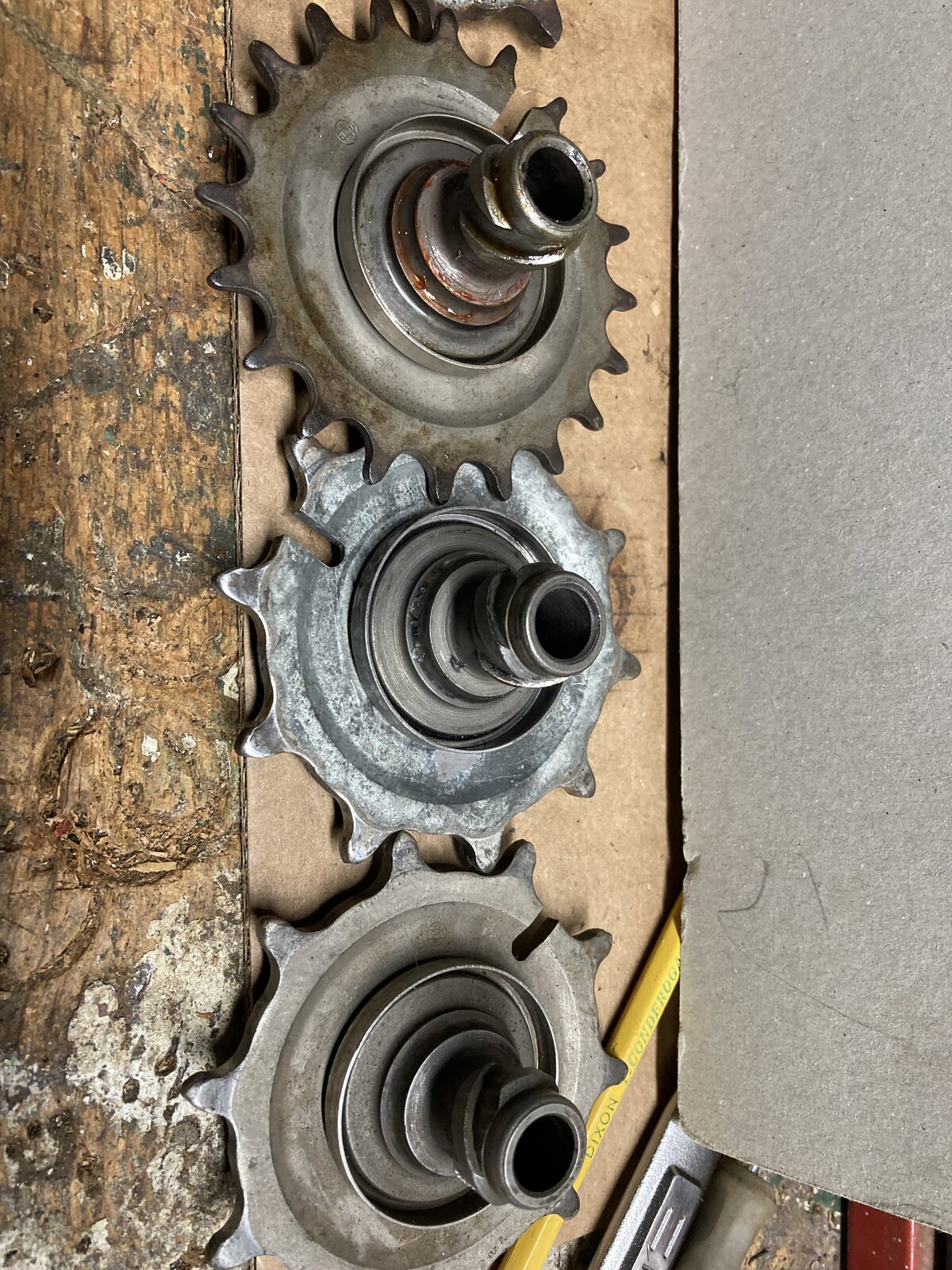 I think the older hubs are taller , been a while since I fooled with them.The she'll might have difference 1930's compared to 40/50. Last wheel build I had loose sprocket after assembly. Only way it could be set without dragging. Gone to morrow coaster. But need more hubs .

buickmike said:
I think the older hubs are taller , been a while since I fooled with them.The she'll might have difference 1930's compared to 40/50. Last wheel build I had loose sprocket after assembly. Only way it could be set without dragging. Gone to morrow coaster. But need more hubs .
Click to expand...

That would make sense it was an old one, I will have to dig a few others out. Any hints on how to remover the sprocket from the driver?

I had a mate that connects to drive-r welded to a nut,. Then using a cylinder or main cap bolt ground down to keep integral washer within con fines of driver- proceed ed to ruin a couple of drivers when the engagement spines. were sheared off as driver turned and dug in bottoming out. Against nut. Subsequently had a stack of washers to prevent that. On my morrow build I just used vise and propane torch.Driver was shot any way. Much easier with heat. Probably a difference on brake arm side too, but I was more concerned with using parts that weren't worn out..

If someone has already documented this, I apologize. Parts needed: clutch, 1 inch grade 2 nut and one 2 3/4 inch long grade 8 bolt with nut and washer. Procedure: Weld clutch to 1 inch nut. Thread driver into clutch and fasten with the 3/8 bolt. Hand tighten. Put the assembly in a vice and apply...

buickmike said:
I think the older hubs are taller , been a while since I fooled with them.The she'll might have difference 1930's compared to 40/50. Last wheel build I had loose sprocket after assembly. Only way it could be set without dragging. Gone to morrow coaster. But need more hubs .
Click to expand...


I don't believe it is as simple as prewar vs postwar, but would be happy to be proven wrong in the interest of solving this.

Somewhere on the CABE there is a picture of 3 Model D shells next to each other. It might have been 2 model D shells and one model C shell. In any event, one model D shell was taller than another model D shell. I thought the picture was in the Model D Hub Dating Thread but it isn't. If anyone knows where that picture is, please link it.

I believed from looking at it that the shell was just plain taller and would have had a slightly different over-locknut distance and chainline when assembled into a hub. I also wondered if it was a year change, or maybe just for some other application with wider frame spacing. Now I am second guessing that, and thinking maybe the bearing races could have been the same distance apart and only the shell extended a little further. That view could explain the problem in this thread.

New Departure considered the cog a separate part and would have you changing the cog, not the whole assembly. Funny though, I switched internal parts around in these hubs with impunity when I was a kid and never noticed this difference in the driver.

The nut comes off with a hook spanner like the one used for fixie locknuts, or maybe a bottom bracket wrench would work(?). It has left hand threads. That gets the bearing out to clean and grease, but the cog has right hand threads. You do need the tool to get that off (see @Gordon 's post).

Here is a picture @Gary Mc posted in The Hub Thread back in 2013 that shows pretty nicely where the interference must be occurring. 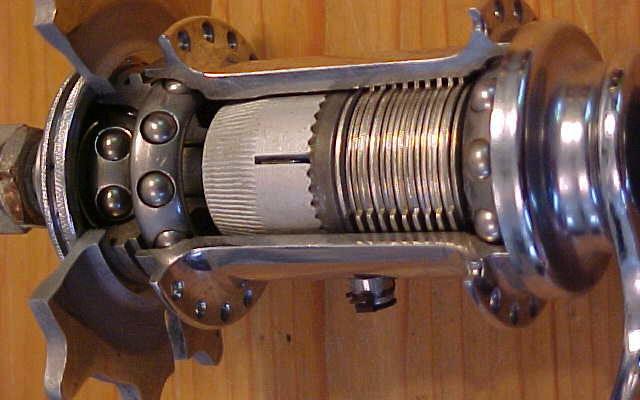 Rustjunkie would know, I built lots of bikes last few years - exhausted my decent parts I like to grab those cutaway hubs and gut em for parts In fact the blackout hub I built carries those innards and runs good I'm out of new departure game now . Wasted too much on new hubs that must have been rechromed used . Enjoy building wheels but looking for alternatives for ND. Point me to the hub thread...They have cutaway morrow? 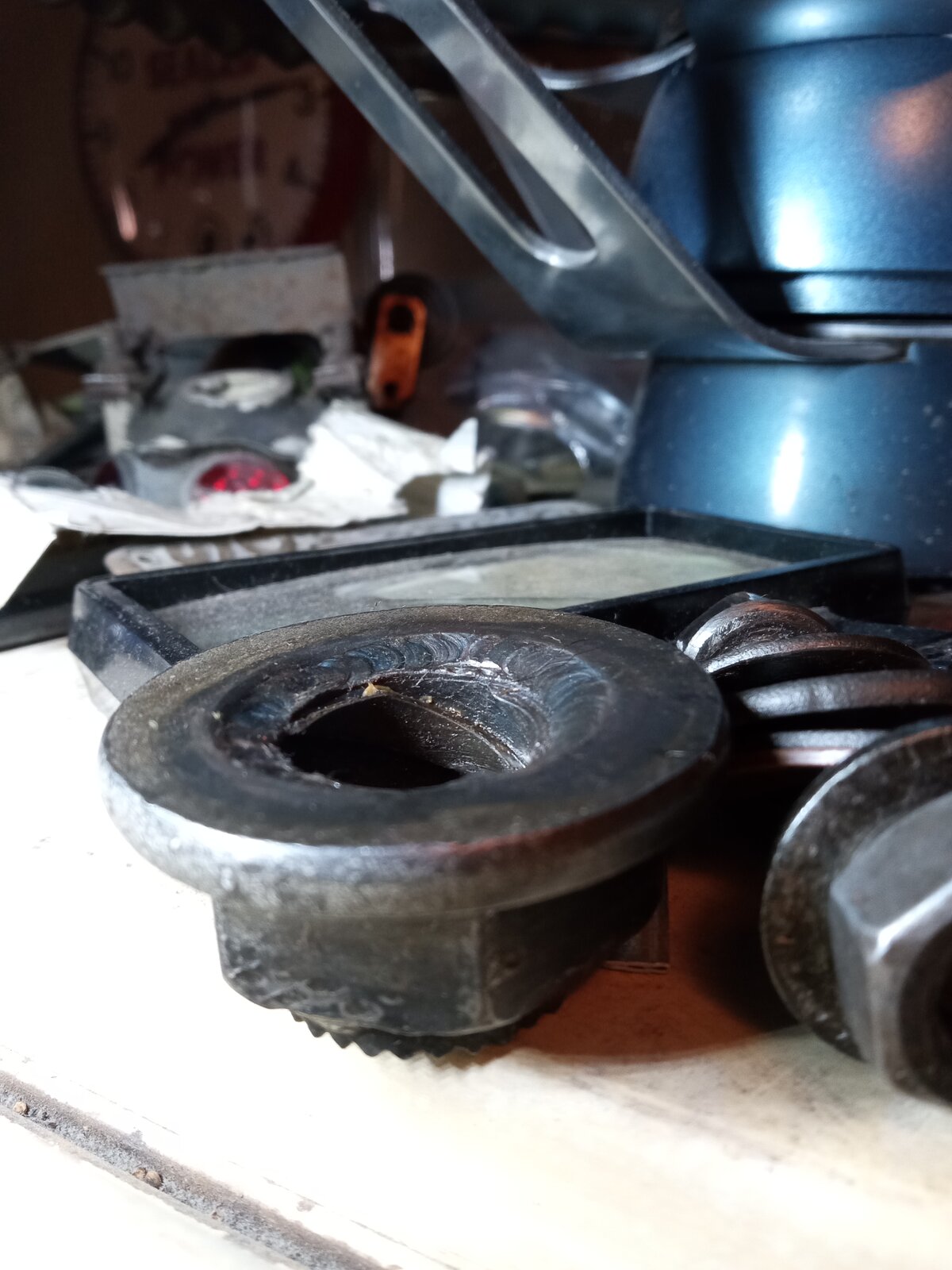 This was my attempt at ND gear removal After chewing up splines I had to shim it. As you say I too would welcome insight on hubs but I'm moving on to different brand
B

https://thecabe.com/forum/threads/the-hub-thread.23779
You must log in or register to reply here.