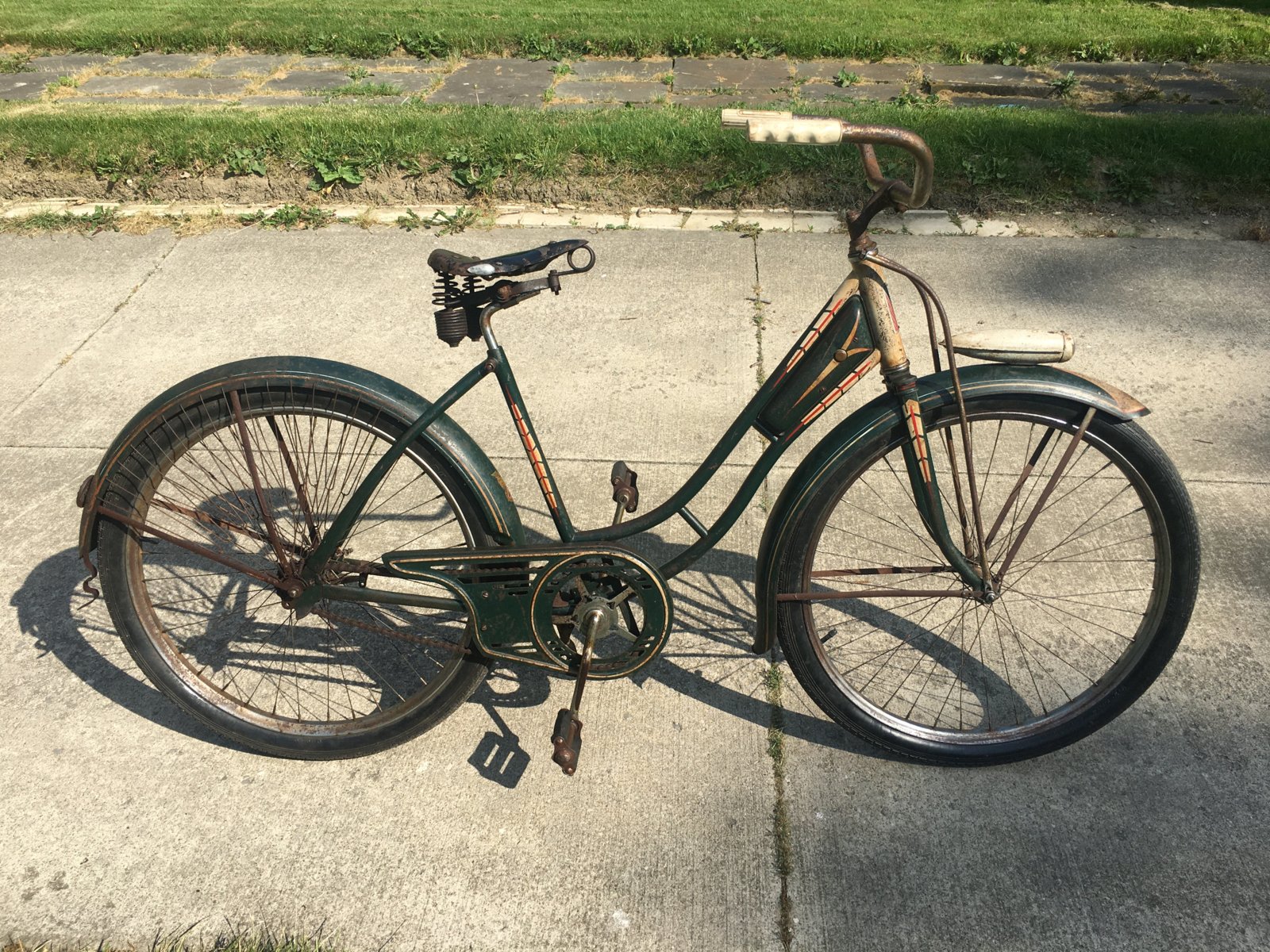 Yesterday, the bicycle that I bought from @tech549 arrived. It's a Viking Special (Columbia, Westfield, etc.) dated March, 1937 (D3 serial number). He was great to deal with, really helpful, and actually made sure that the bike could be ridden before he sent it out.

As with all of my bicycles, my intent is to be able to putter around the neighborhood on it. Not necessarily comfortably, but it still has to be solid enough to support my 230 pound frame.

The wheels, grips, headlight, and kickstand are all replacements, and I'm totally okay with that.

@tech549 had actually offered the bicycle with a complete original front wheel and rear hub, but I asked if he had, among his parts, a rear wheel and pair of tires that might do the job. The cost of a pair of new tires, a rim, and having the rear wheel rebuilt would have put this bicycle far outside my budget. They're New Departure, which was one of the options listed in the 1939 catalog, but I have no idea as to the year of these wheels. They do the job well. The tires are clearly newer, but are old enough so as not be distracting.

My intent is to see just how much color I can bring out in the paint and chrome, get the horn and light working, and enjoy this as a solid rider. My build is decidedly low budget - my major effort is going to be working on the paint and chrome - I don't see myself even spending the $15 to get grips that would look closer to right. ($5 at a swap meet? Probably.)

Some questions:
Does anyone have the 1937 (or would it be 1936?) catalog? I would like to know which options were standard at the time of production.

The rubber on one of the pedal blocks seems like it may be crumbling / splitting. All four are heavily worn. I was thinking about using some epoxy on the one to stabilize it. Is this a bad idea?

The seat leather has completely come off. While I have a good stock of scrap leather, I have never actually stitched it before. I was thinking of gluing it down to the seat with epoxy or something, but it bugs me that that would mean said leather couldn't be used for restoration by a future owner. On the other hand, someone who wants to do a full restoration might want to replace the leather with new. Thoughts?

How structural are truss rods? I kind of bent one a bit in the installation, and I haven't been able to get it completely straight.

Finally, I don't have all of the skirt guard bits, as the photo shows. Are they available? Are they expensive?

This is going to be a fun project, and I look forward to sharing more of it.
cbustapeck - because I'm Christopher Busta-Peck and it's the username I've used everywhere, for decades.

Editorial note: I now believe this to be a 1939 model. Serial number is D38061
cbustapeck - because I'm Christopher Busta-Peck and it's the username I've used everywhere, for decades.

Cool bike. Skirt guard bits are uncommon. Try posting a want ad here. Truss rods by now are just for show and can be straightened.

Gotta keep the truss rods. Cause they're cool. Straighten em out if needed. The saddle doesn't seem to have much leather left. Check out this thread for recovering cheap. https://thecabe.com/forum/threads/re-cover-a-saddle-quick-cheap.92195/. Looks like a single pan saddle which makes it a bit more difficult to get looking good but still fun and worth doing. Don't add too much padding or it will look like a wrinkly couch. Too little (like i did) and the ride won't be comfy. As for the pedals ride em till they fall apart then get a 10 dollar pair of ladies pedals at a swap. Have fun! I think the chrome and paint look fine. These are old bikes. They are meant to look old. (well most of them) good luck with the light and horn. I haven't had the pleasure to tinker with these yet.
I got a FEVER! And the only PRESCRIPTION... is MORE BICYCLES!

Ken @MrColumbia might have the literature you are seeking.
My friend said onions are the only food that can make you cry. But that was before I hit him in the face with a watermelon.


Yes, this is an early 1939 serial number. On the BB, above the S/N should be another stamped letter and number, probably an E or an F with one or two numbers after. If you are interested, tell us, and we can say which month it was made.