I would like any information pertaining to the Nyack Bicycle.

I have pieced together some information using thecabe, as well as google. Please feel free to add any information you know or correct anything I may have mistaken. I have also attached photos that I found related to the Nyack Bicycle.

Nyack bicycles were produced solely by the Nuttall Manufacturing Company from the years 1897 to 1901. The company was located at the former Morrow Shoe Manufacturing building near the train depot in South Nyack. The building was located at Cedar Hill Avenue and the former “Railroad”, known now as Depot Place. The company was ran by John Nuttall, who was known to be the best nickel plater in the United States at the time. The company was known for its work nickel-plating, as well as enameling. One of the company’s first known jobs was nickel-plating 30,000 handlebars. Originally, the company employed twelve expert bike builders who moved from New York City to the lower Hudson Valley to work at the factory. According to an article, dated January 1st, 1898 the company at that time employed forty employees and expected an increase of twenty by the end of the month. The company proved to be very successful through it's run. The Nuttall / Nyack bicycle was known to be second to none in quality and is now highly prized by avid bicycle antique collectors. The company was known to make parts for other companies as well as juvenile Spalding bicycles until it was bought out in 1901. The company was taken over in 1901 by Colonel Albert Pope’s company, Columbia. At that time Pope developed the American Bicycle Company. Furthermore, The American Bicycle Company was formed as a trust to rid the competition of over fifty bicycle companies. When taken over in 1901 Pope added the American Bicycle Company decal stickers to all the bicycles produced by his company. The American Bicycle Company was in existence from 1900-1901. It is possible that Pope reintroduced the Nyack name at a later date. 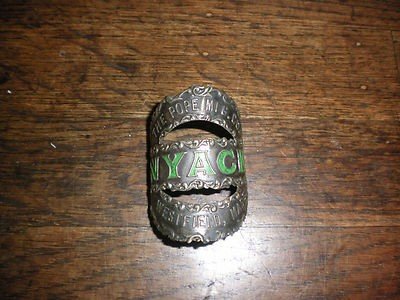 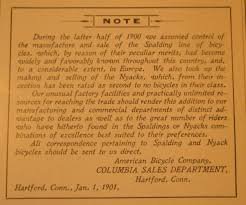 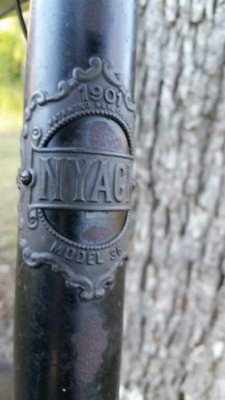 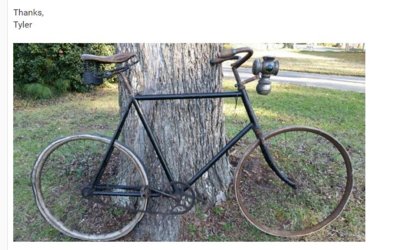 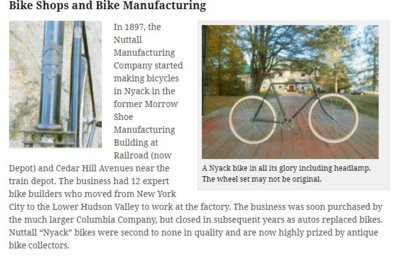 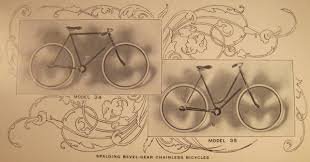 Chainless Models as seen in the 1901 Catalog 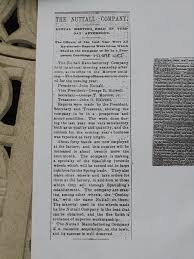 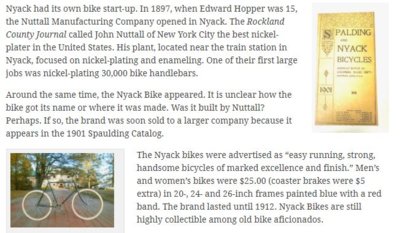 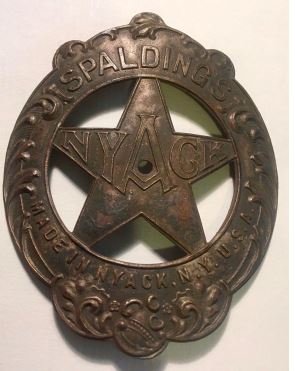 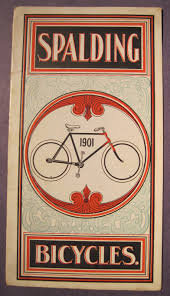 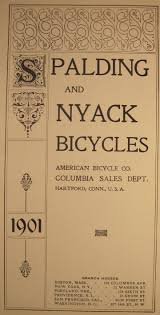 I do not own any rights to the photos included and information may be faulty, it is just what I have pieced together from other forums & websites (non of which were a credited source).

I would like any information of the company you have. But mostly, I am looking to find information specific to the Nyack bicycle itself such as models or numbers produced. 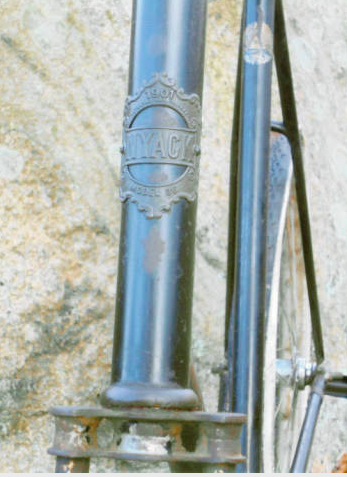 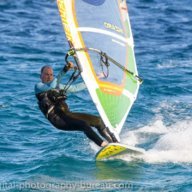 The Nutall manufacturing company was run by four people. John Nutall ( president) & his lawyer, George R. Bidwell (vice president) came up from N.Y.C. to Nyack (about 20 miles up the Hudson river). George T. Morrow, Jr. the building owner (secretary) and John D. Blauvelt, member of a prominent area family, town druggist & local juice,(treasurer) were the corporate officers. I believe that the Nyack bicycles only came in two basic models, a mens & a women's. They were no frills, working man's bikes, though, since the nickel plating was done in house, were attractive bikes at a reasonable price, which may have attracted Pope. Along w/ parts and a juvenile line for Spaulding, I've read that they made a" Credenda" bicycle w/ the name Nutall on them. Can you include closeups of your Nyack bicycle? It would be interesting to add it to the data base.
You must log in or register to reply here.
This ad goes away when you register for an account!
Share:
Facebook Reddit Pinterest Tumblr Email Link
Top Bottom