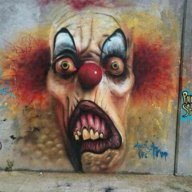 This is a 1953 Phantom I bought a few weeks ago from Don Christie. The original owner passed away years ago after starting a restoration. He had the fenders and a few other pieces rechromed. I spent quite a bit of time bringing the original paint back to a shiny condition. A lot of cleaning and polishing metal parts. It was missing some small parts which I replaced . The seat is a placeholder while the original is being recovered. It rides well and I'm looking forward to riding it this summer. Before and after photos. 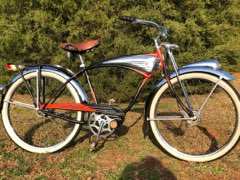 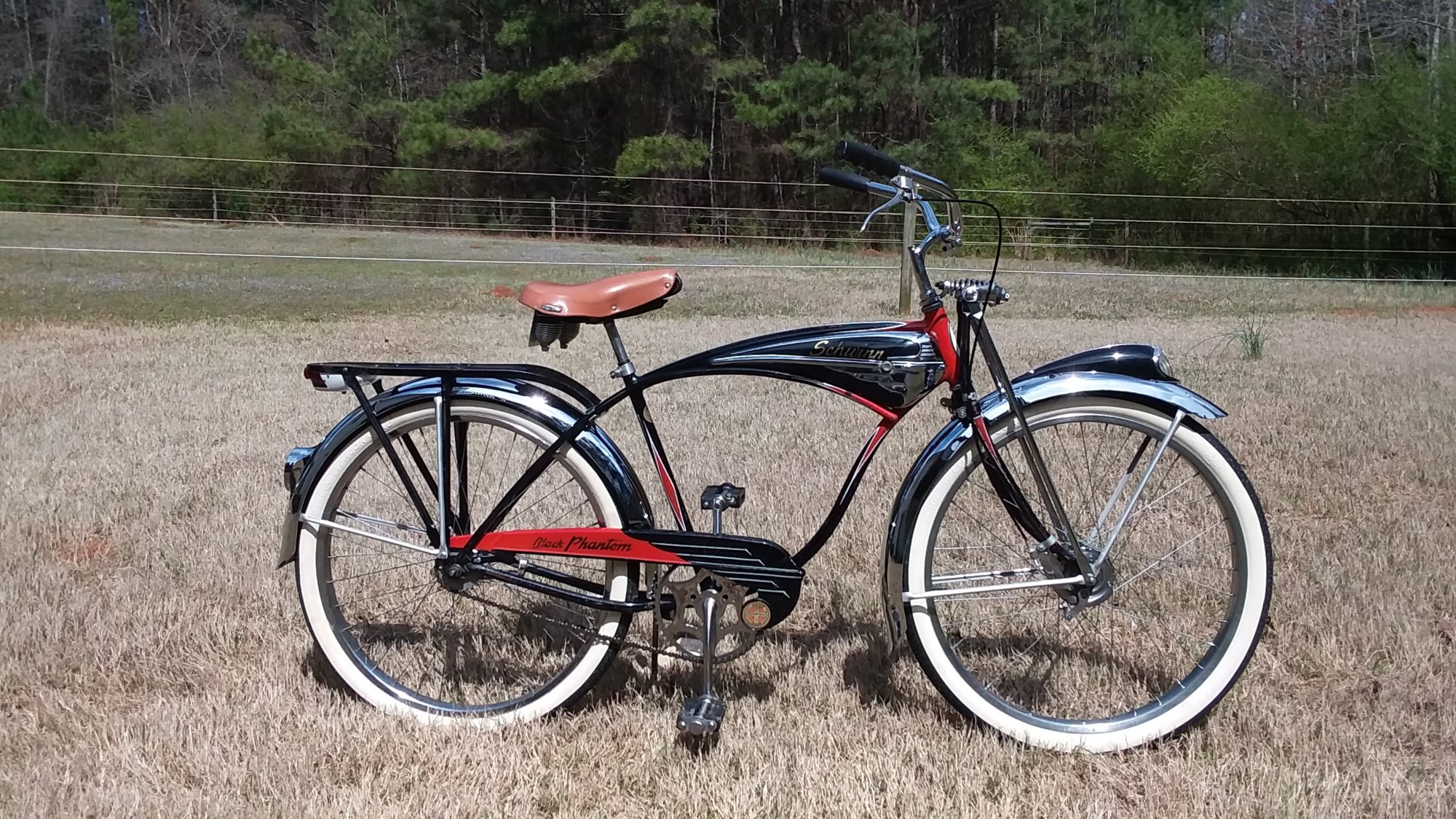 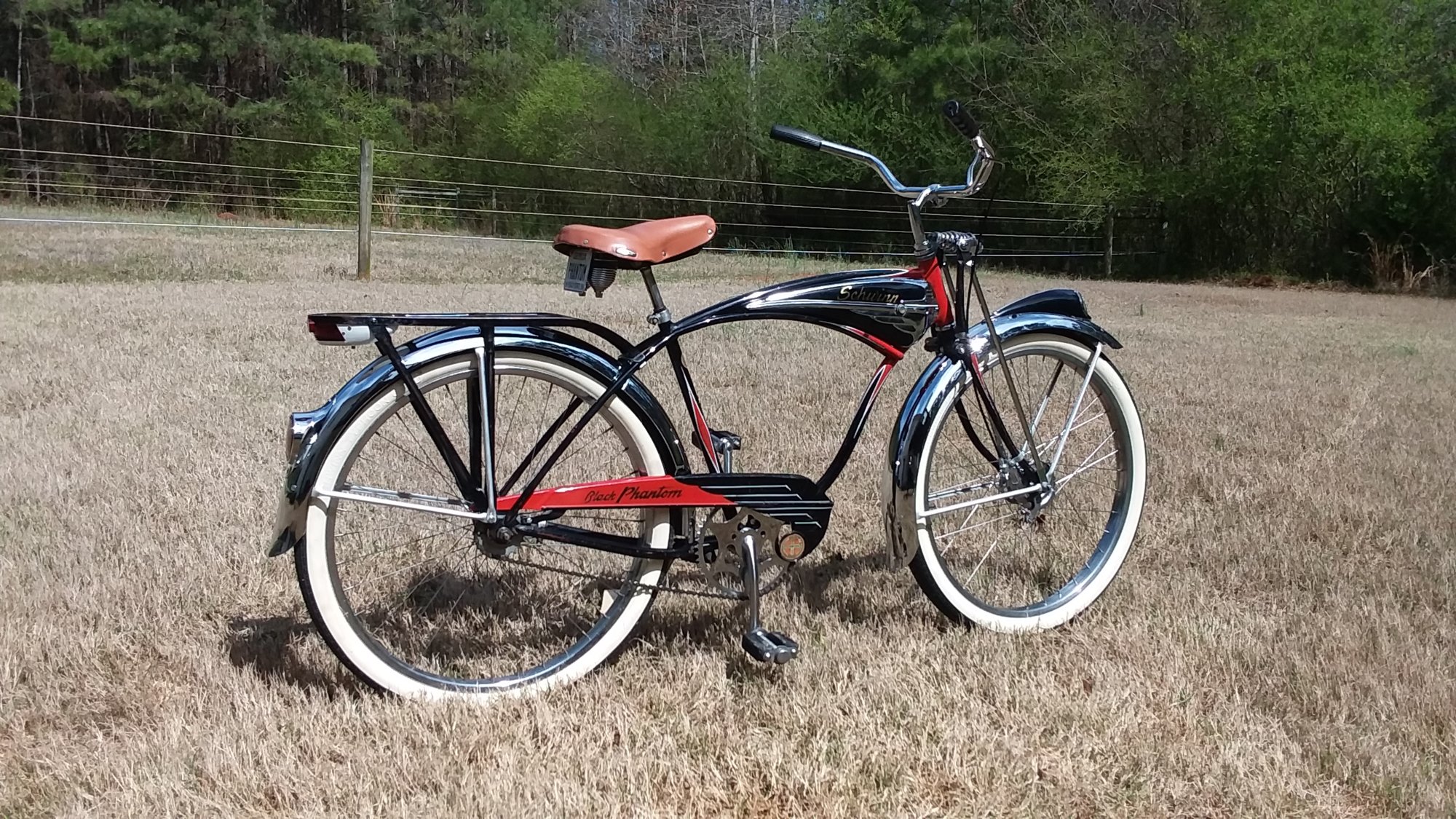 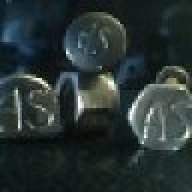 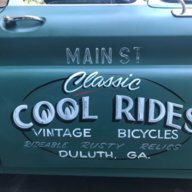 Great Job on the restoration, Phil !!
I was lucky enough to know the fellow you mentioned who passed away a few years ago (the guy who started to restore this many years ago) his name was Charlie Adams and he owned a Schwinn Bicycle Shop in Newnan, GA back in the '80's & '90's, and I believe closed it down in the early-to-mid '90's. Then Charlie retired to the area of Cleveland, GA. He also had quite a vintage/antique car collection.
It is amazing how I saw it in many boxes of parts/pieces when I acquired it from @JOEL (after he bought Charlie Adams remaining bike collection from a "Car Guy" who was best friends with Charlie in his retirement years) .... That fellow (car guy) brought a pick-up truck and full size trailer load of Charlie's mostly All-Schwinn Collection to the Pedal to the Metal Swap Meet in November '18 and would only sell it by the "Truck & Trailer Load"
It was Joel who was able to swing a deal and then he was making some deals to other Vintage bike Guys at the swap meet, because Joel couldn't get everything back home with him in his Chevy Van. Joel had that Van packed so tight .... there wasn't room to add a PENCIL inside that van for his trip back home. I made Joel an offer on the Phantom of your's .....and then I got too overwhelmed by so many projects..... I quickly flipped it to @DonChristie who then proceeded to assemble it, to a level of "mostly-all-there", to then .... make a sale to you....
I'm very impressed with your level of restoration! I hope you enjoy that Phantom for many years! Cheers! CCR Dave
Reactions: DonChristie and Mr. Monkeyarms
You must log in or register to reply here.
This ad goes away when you register for an account!
Share:
Facebook Reddit Pinterest Tumblr Email Link
Top Bottom