Ive been playing musical forks lately. I didn't realize how many Schwinn Lightweight forks I had until I started looking for a particular one. When I had 8 lying out I realized I didn't have the one I was looking for anymore and I started looking at the others. Then I remembered a pic I found long ago of a page in a Schwinn book that showed their TOTL forks for that period but there are many more.
Has anyone started a comprehensive Schwinn fork thread?
I think I know what bikes the ones I have came off of, all but one. I'd like to know what bike it came off of also but its an oldie.
From what Ive seen The Ashtabula forks came in two blade shapes and two lengths for 26" and 27" bikes starting in 56'? I dont know.
Maybe folks could dig out forks and take pics of forks on bikes till we have a comprehensive pictorial of Schwinn forks. (26"-27"-28")
Was there a special fork for larger wheel track racers?
When did they start using French and Japanese forks? others?
Heres the pic of a Schwinn Parts books showing four types of early forks. I have two early ones and neither are one of these. 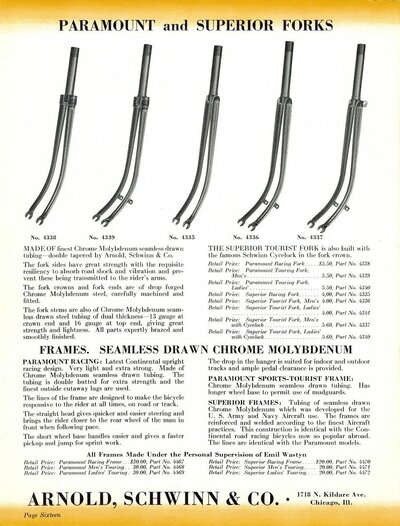 As far as early forks go, I have locking fork I thought was from the early 50's but now Ive seen a 54' traveler that has a locking fork that is different from mine. On mine the caliper pivot bolt is a stud screwed into the fork. The hole doesn't go through because the lock is in the way. On this 54', the pivot bolt goes through and the fender is hanging on it but it still has a lock. I'd like to see that one close up. This 54' also has the early Weinmann alum. Calipers. 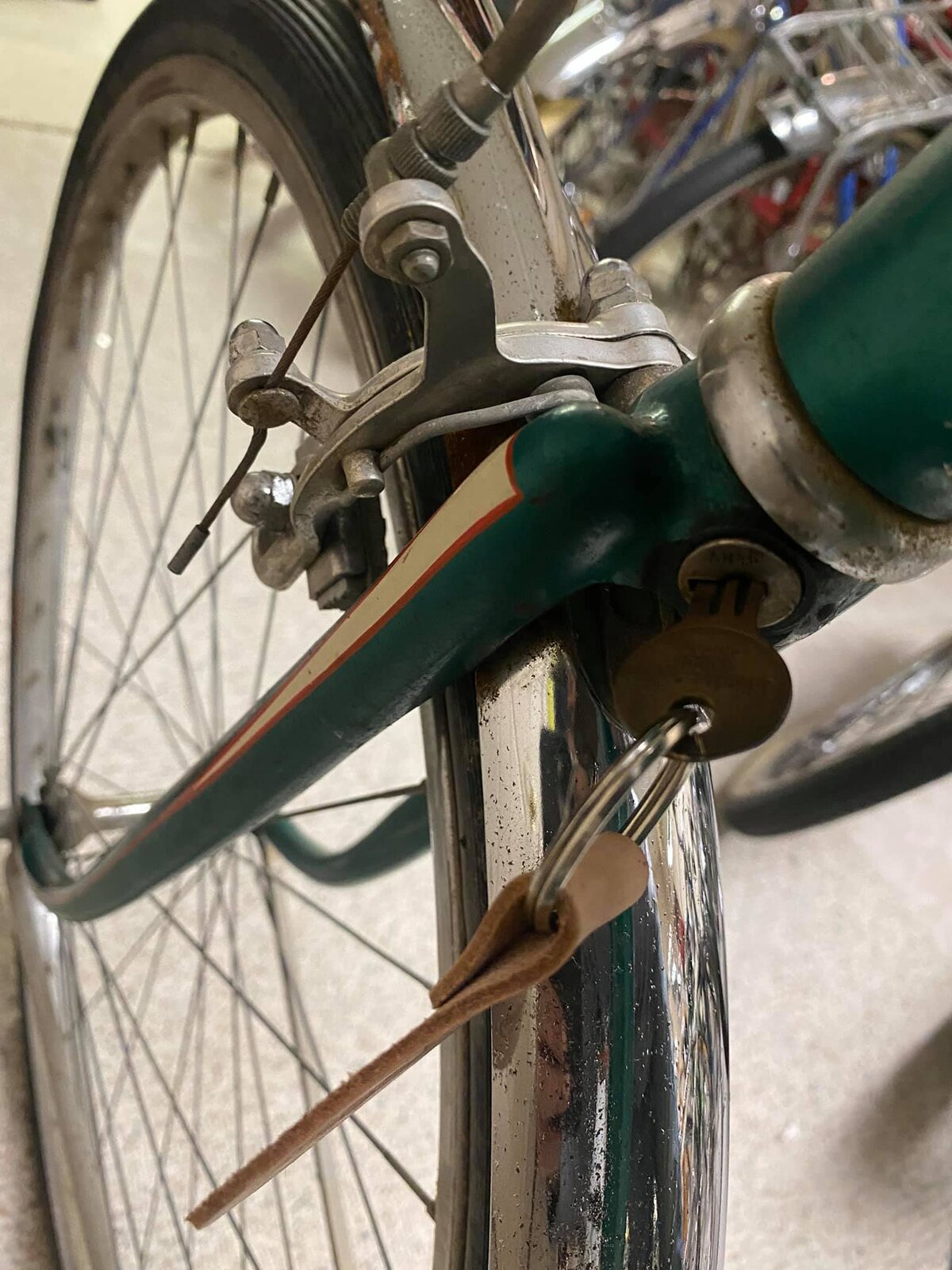 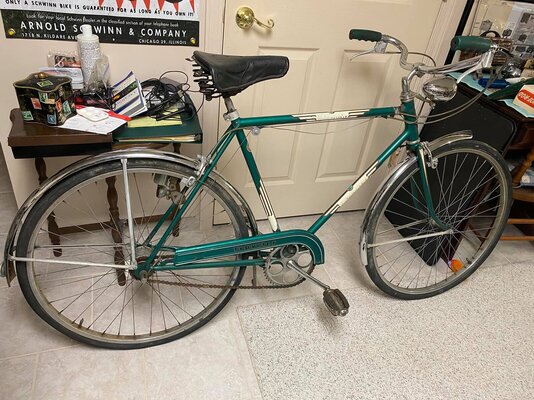 Heres mine with no hole in the rear. Also came with the metal Schwinn Caliper.
I will take more pics and post them. 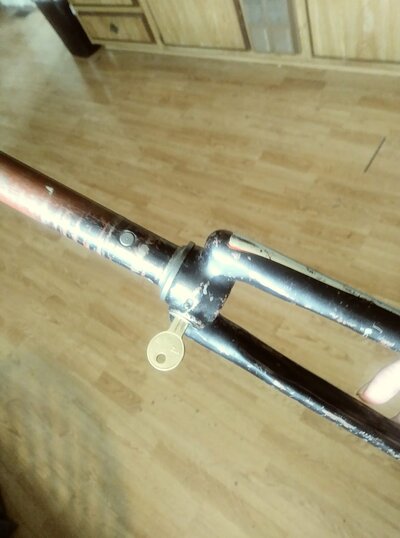 I believe you have the same as the Superior Tourist version but it doesn't have the fender stay tab attached to the legs.

GTs58 said:
I believe you have the same as the Superior Tourist version but it doesn't have the fender stay tab attached to the legs.
Click to expand...

I'd like to think so, but I think its a little heavy to be Chro-mo. I have also seen a world Varsity with a black locking fork like mine but I didn't get a clear look. Im going to weigh them tomorrow and take a couple pics. Ive got another old one with fender brace braze-ons. Mine also have stiffening crimps on the inner legs. It doesn't depict that in the pics above on any of those forks. But I Dunno....

I should have said same design/form as the Superior.

thanks very much for commencing this thread - a most excellent idea!

one Schwinn fork date have long wondered about is the beginning of the Tange produced forks as seen on models such as Suburban and Continental by the late 1960's.

thanks very much for commencing this thread - a most excellent idea!

one Schwinn fork date have long wondered about is the beginning of the Tange produced forks as seen on models such as Suburban and Continental by the late 1960's.

Yes, Id like to know more about those early versions. Im pretty sure that once the Japanese bikes were introduced into the Schwinn line, their better lightweight forks switched to Tange. If going by the crowns, (you would know way more about this than me) It looks like a Tange fork on the late 60's Super Sports. But it couldn't have been in the first few years, so what about those?
Going through forks I ran into two that I don't know anything about and I'll bet you could sort them out in a few minutes. You always seem to come up with the parts and source info on the parts themselves. I'll post them sometime later in the general lightweight thread. Im going to use one soon and the other needs a new home.
I'll get to the Schwinn fork stuff later today sometime.

it is more economic for them to source the forks from fork producer specialists such as Akisu, Lung, Nissan & Tange

Yes, the forks were Tange on most I've seen but the Frames were Panasonic etc. Even the Paramount used one. I have a Tange on my old Schwinn in Place of the original cast iron Ashtabula fork and it is a completely different riding bike. They are really nice forks. And about a 3rd of the weight of a similar sized Ashtabula fork.
We could start with that one I guess.
I got this fork from a Former Schwinn Dealer in Ocala Florida. It was NOS, chromed 3/4 up the legs and the steering head tube was 12" long. It is marked TANGE only. It measures 14.5" from axe centerline to bottom of fork head. By the measurements and how the wheels tires fit, I would say this was originally for a bike with 700c wheels. Since this one didn't come on a bike Id like to know the measurement of one on a bike with 27" tires. These are 700x35's that are 27.25 tall and have 3/4" between the tire and the bottom of the fork crown. 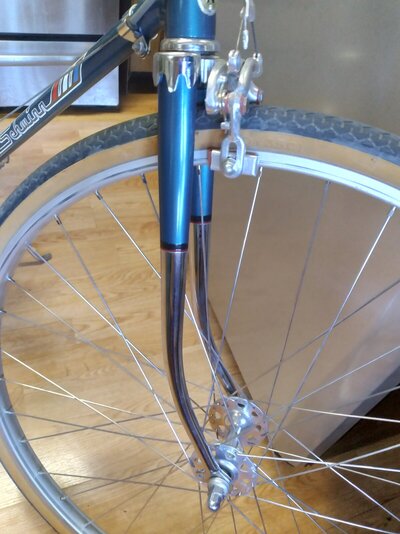 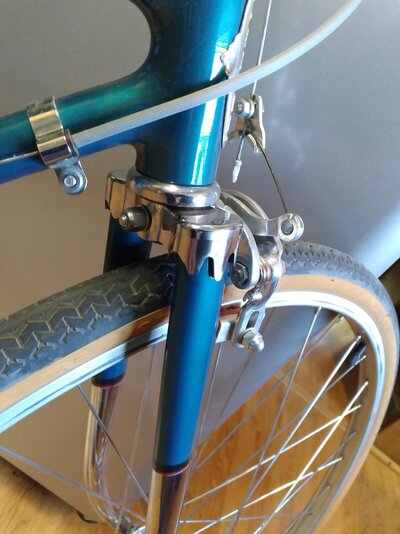 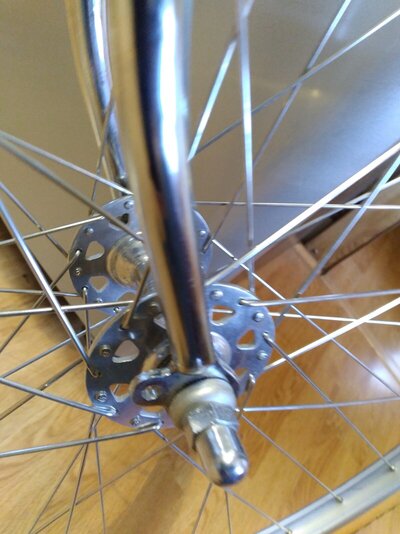 Then the two older ones I have.
The black one is, Im pretty sure, from a 52-3 World Varsity. I really appreciate the hand painted Darts and pin striping these old bikes got. The black one looks hand painted but the blue one looks like it might have been stenciled. Either way, hand done. By the striping on the blue one I think pre-post war time frame. It has washer recesses in the tips or the axle washers whereas the black one doesn't. The ends are really different and the blue one has one short stiffening crimp on the inside of the legs up high and the black one has stiffening crimps from the top to the bend on the legs. Both weigh about the same. I just found out the battery is dead in my little digi-scale so I can't get the weights right now but both weigh pretty close to the same with the older blue one being lighter. 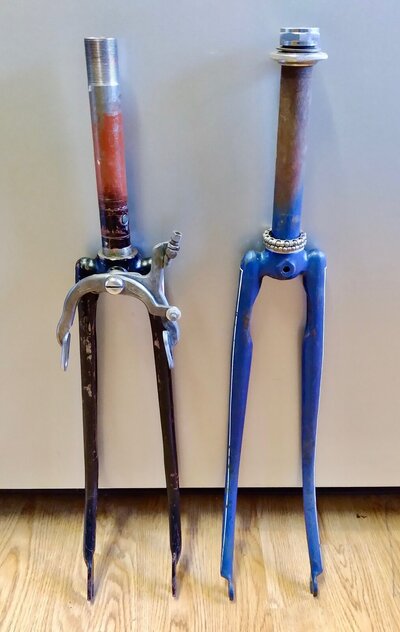 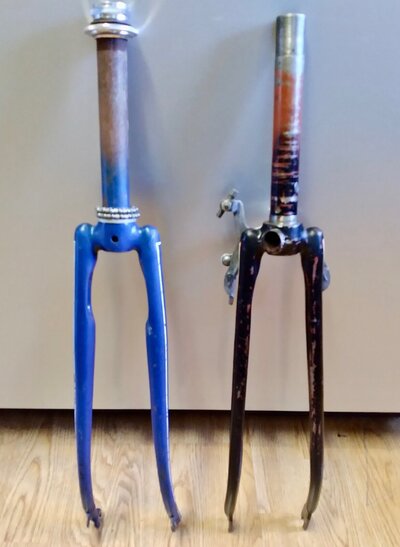 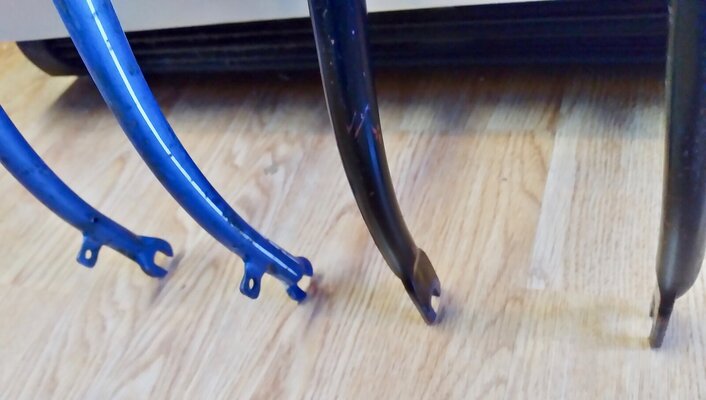 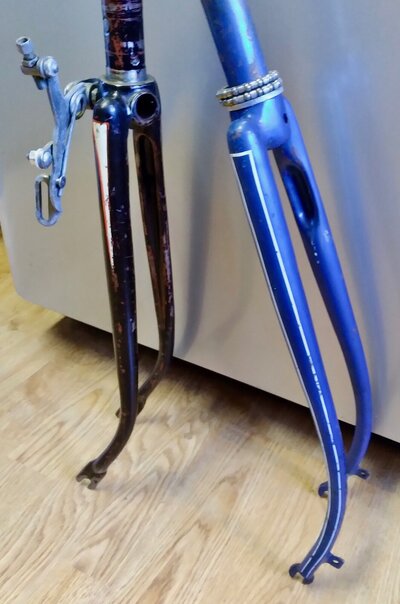 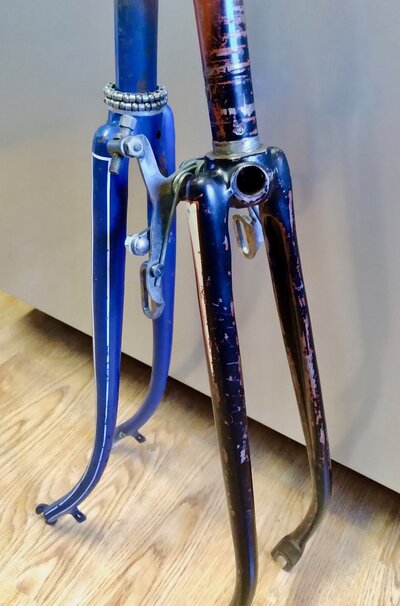 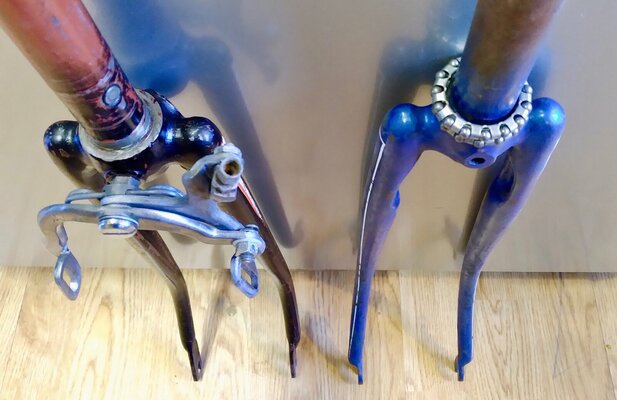 I have never see a Tange fork on a Paramount, unless you mean the Later "Series" Asian built versions.
You must log in or register to reply here.