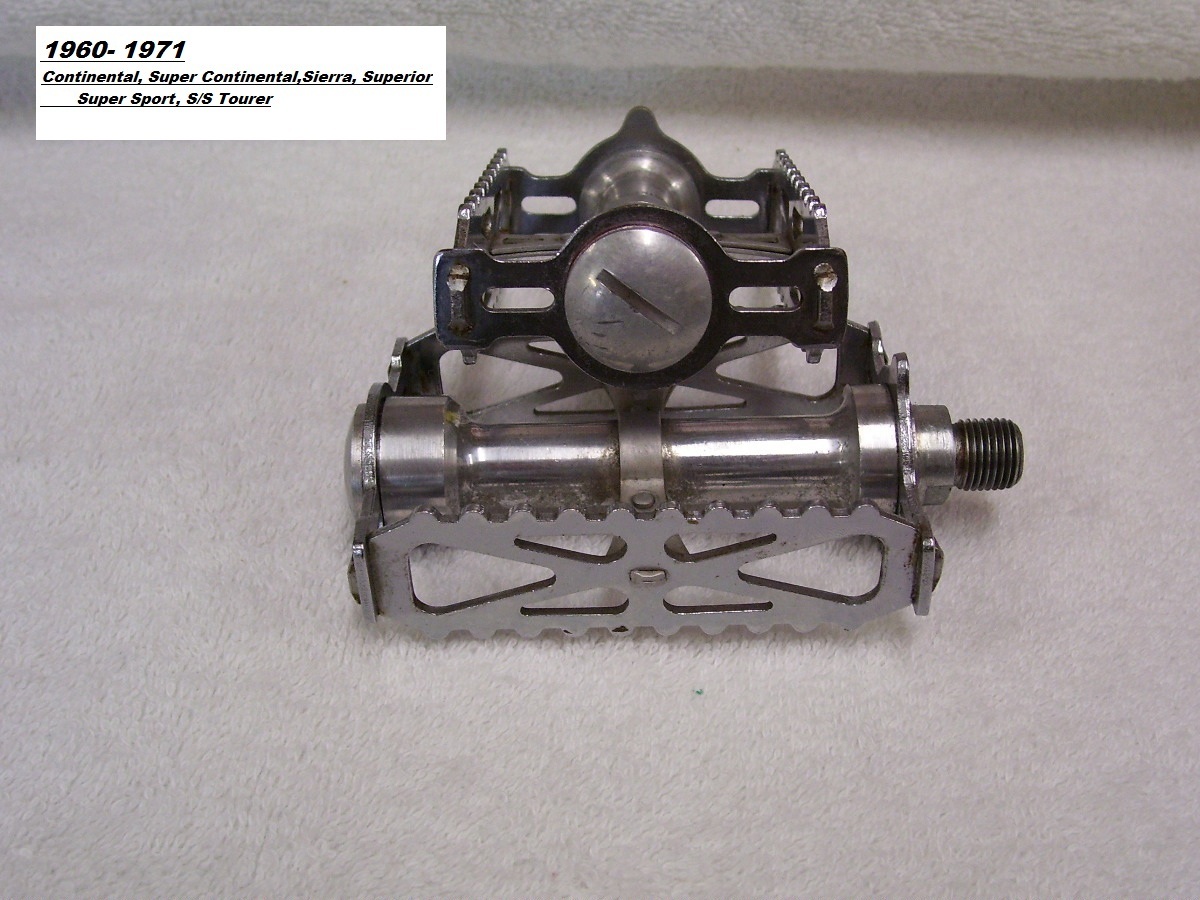 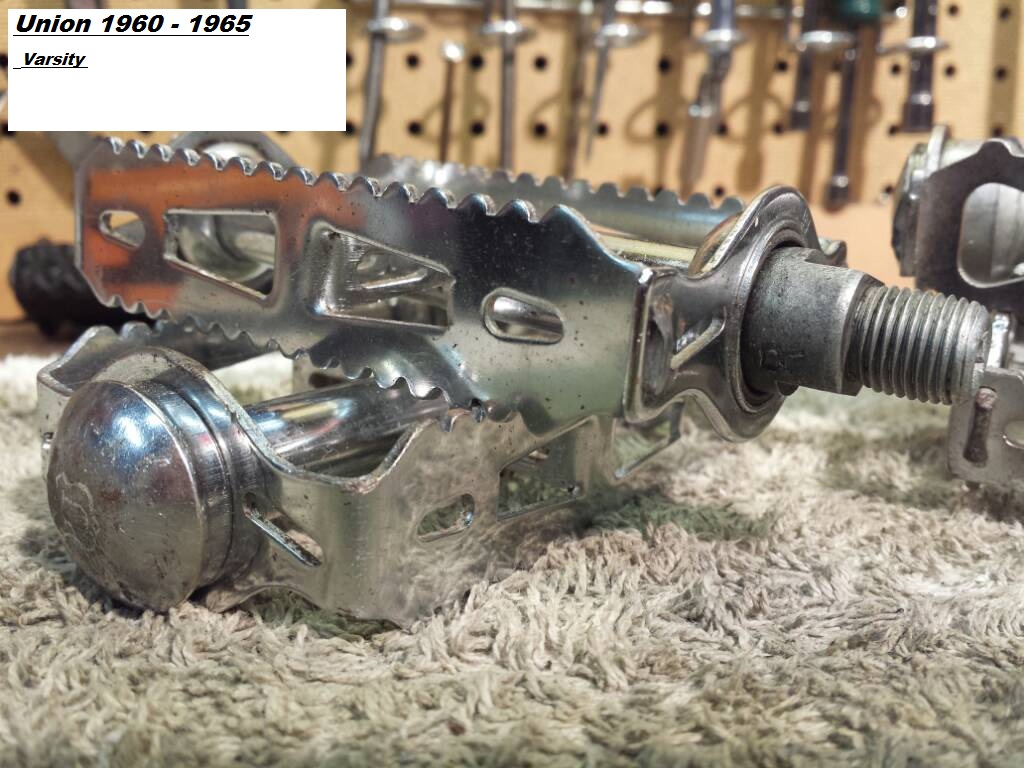 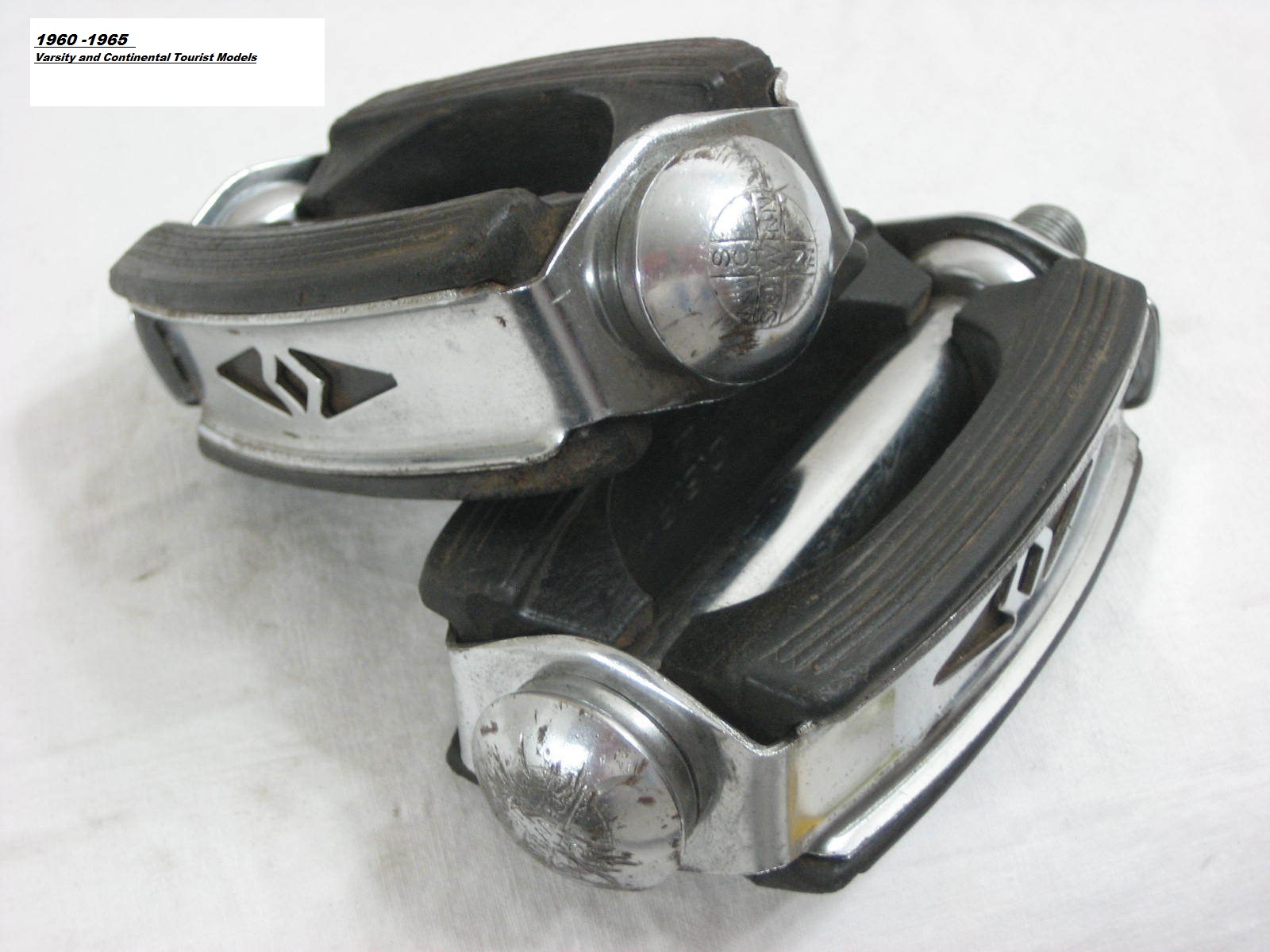 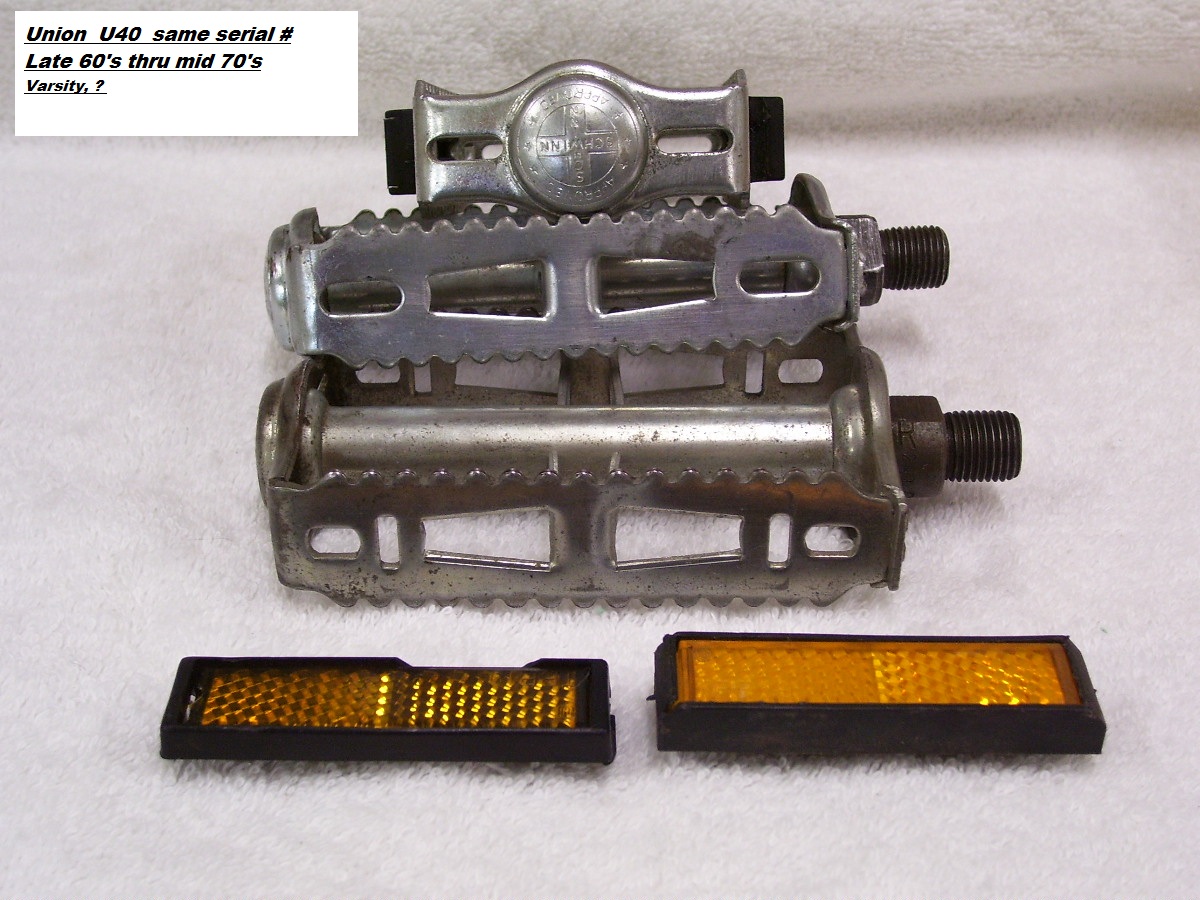 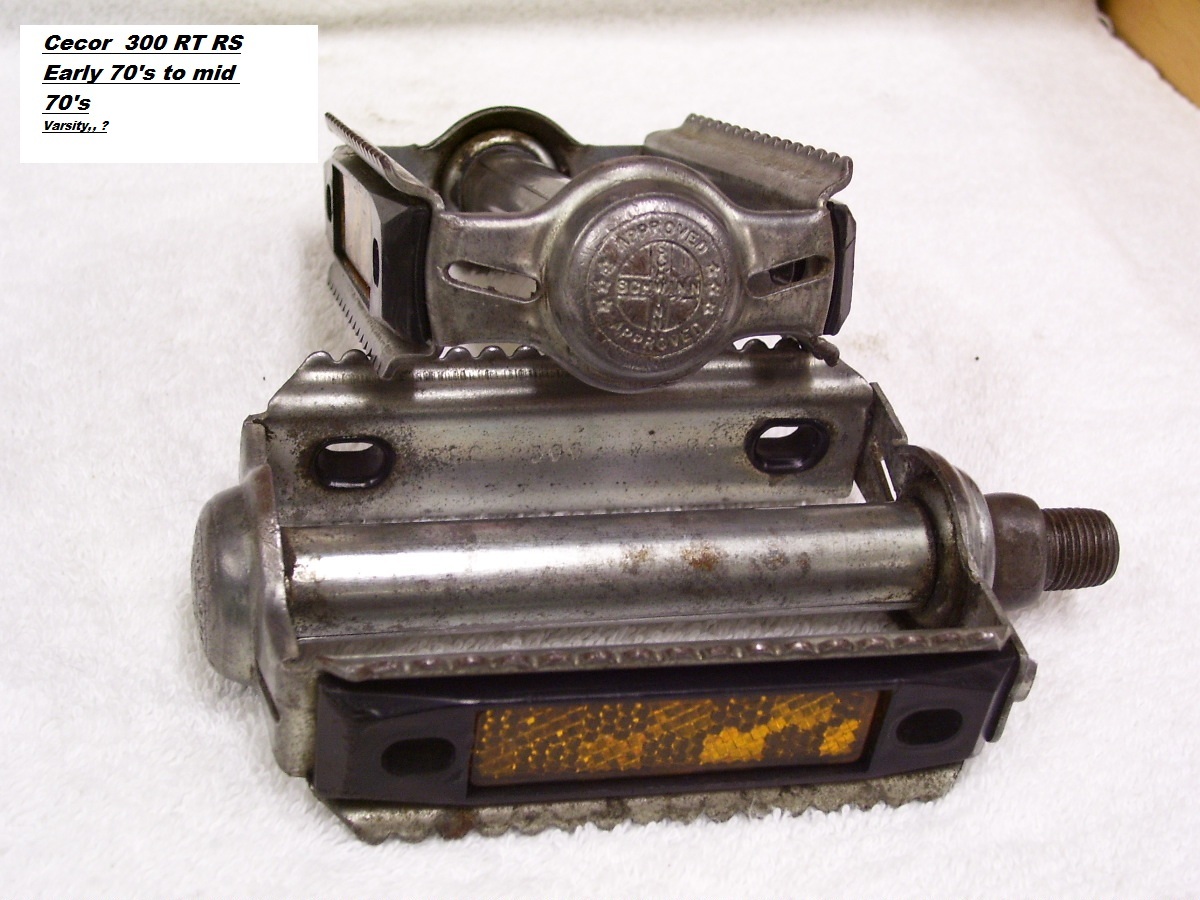 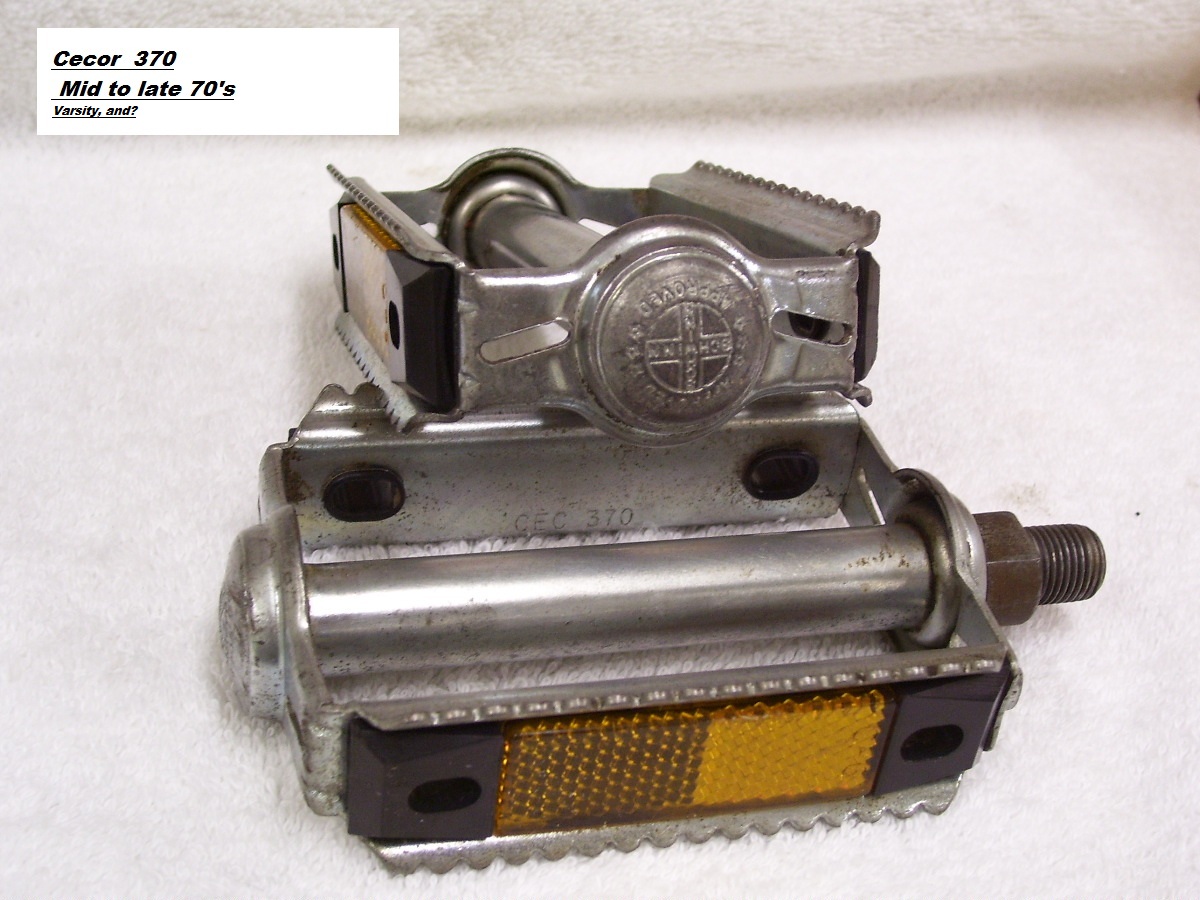 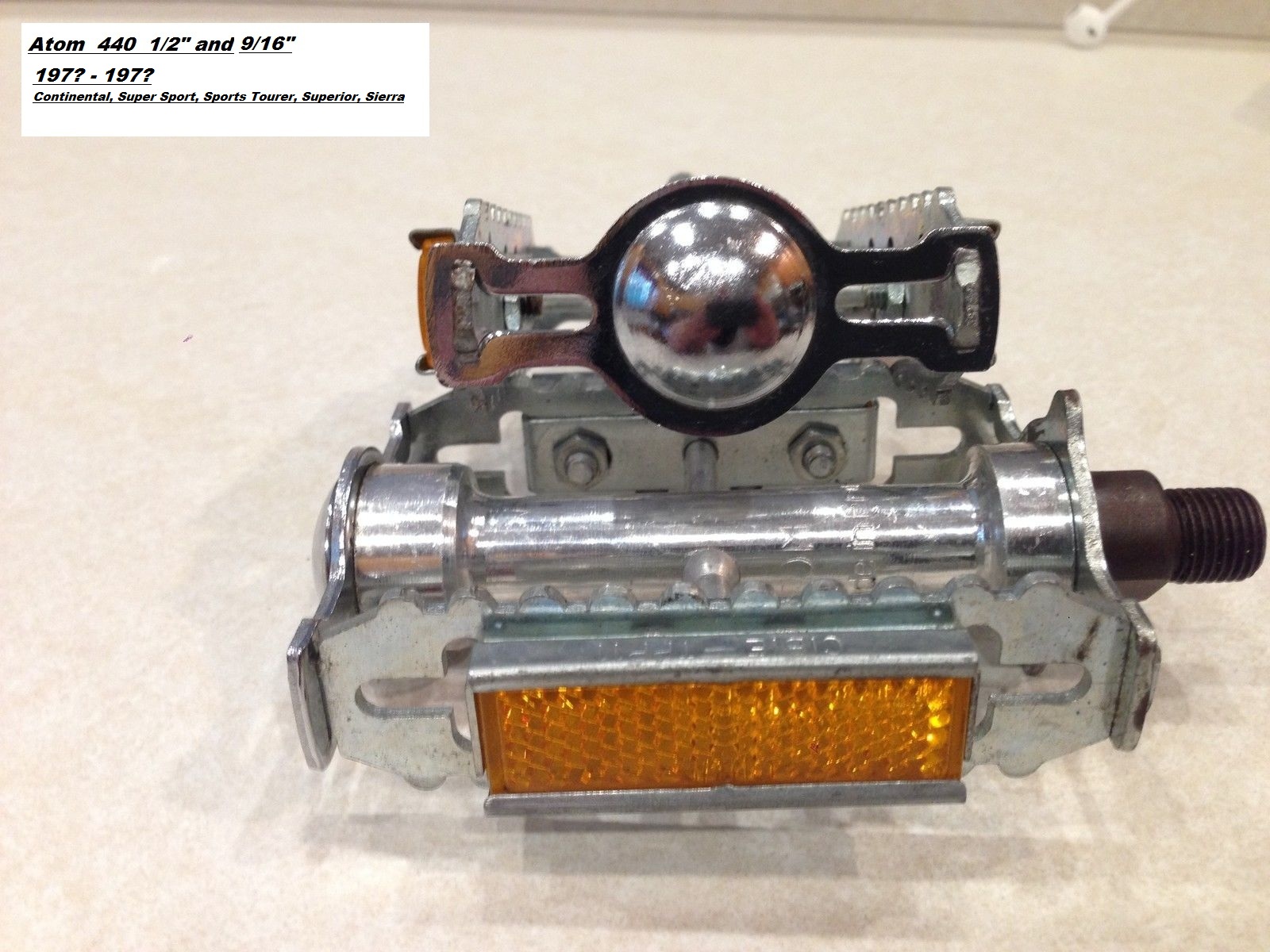 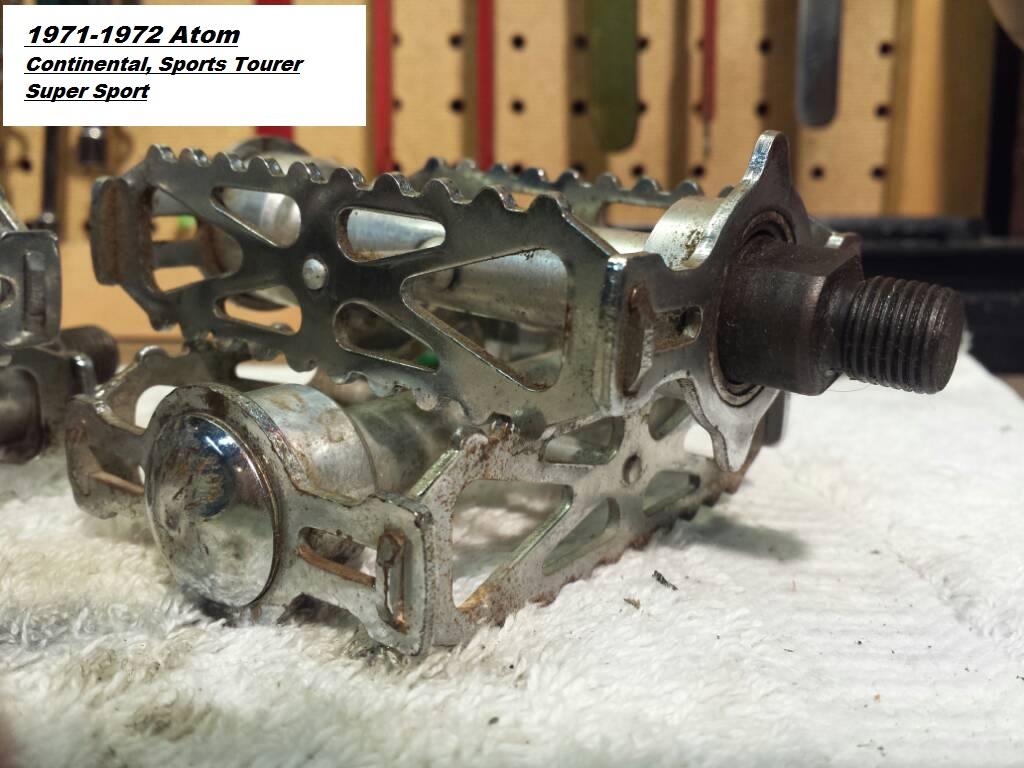 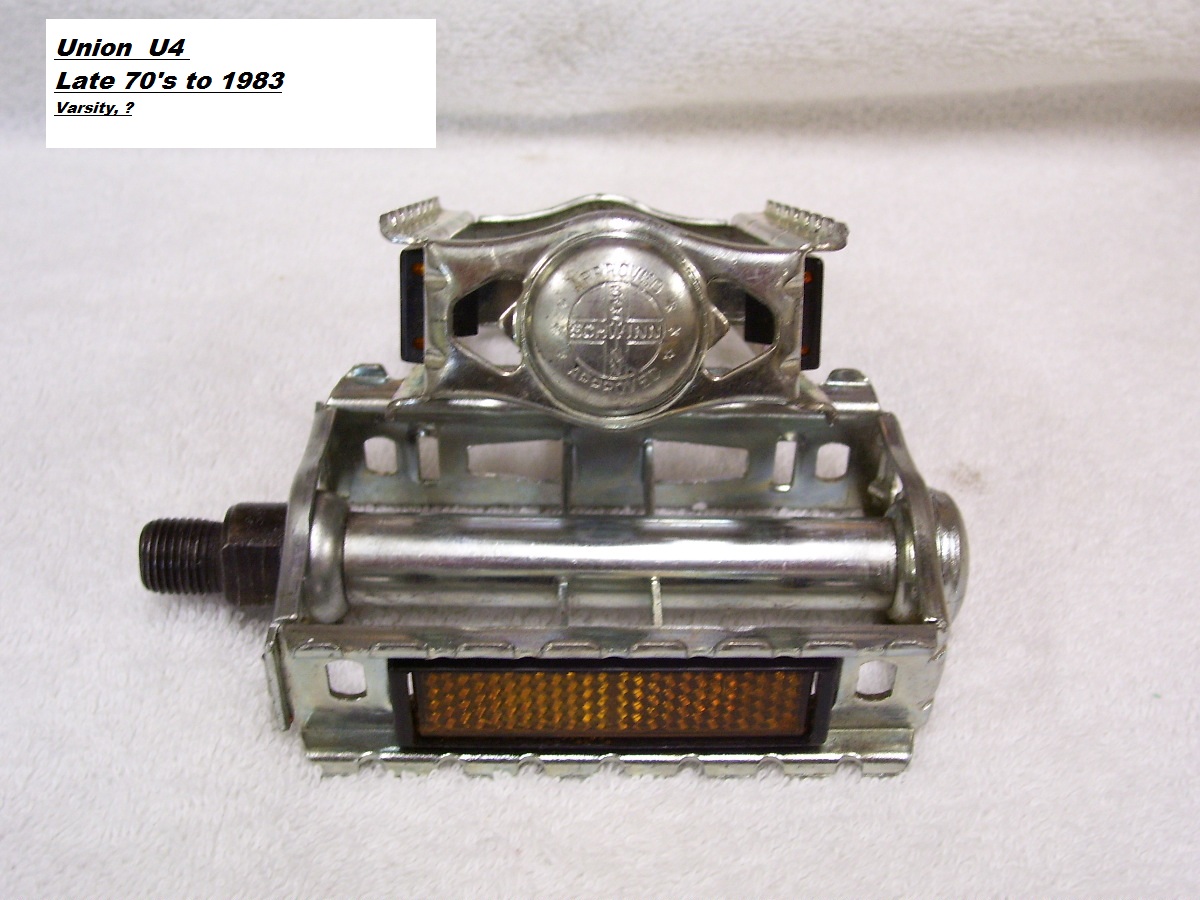 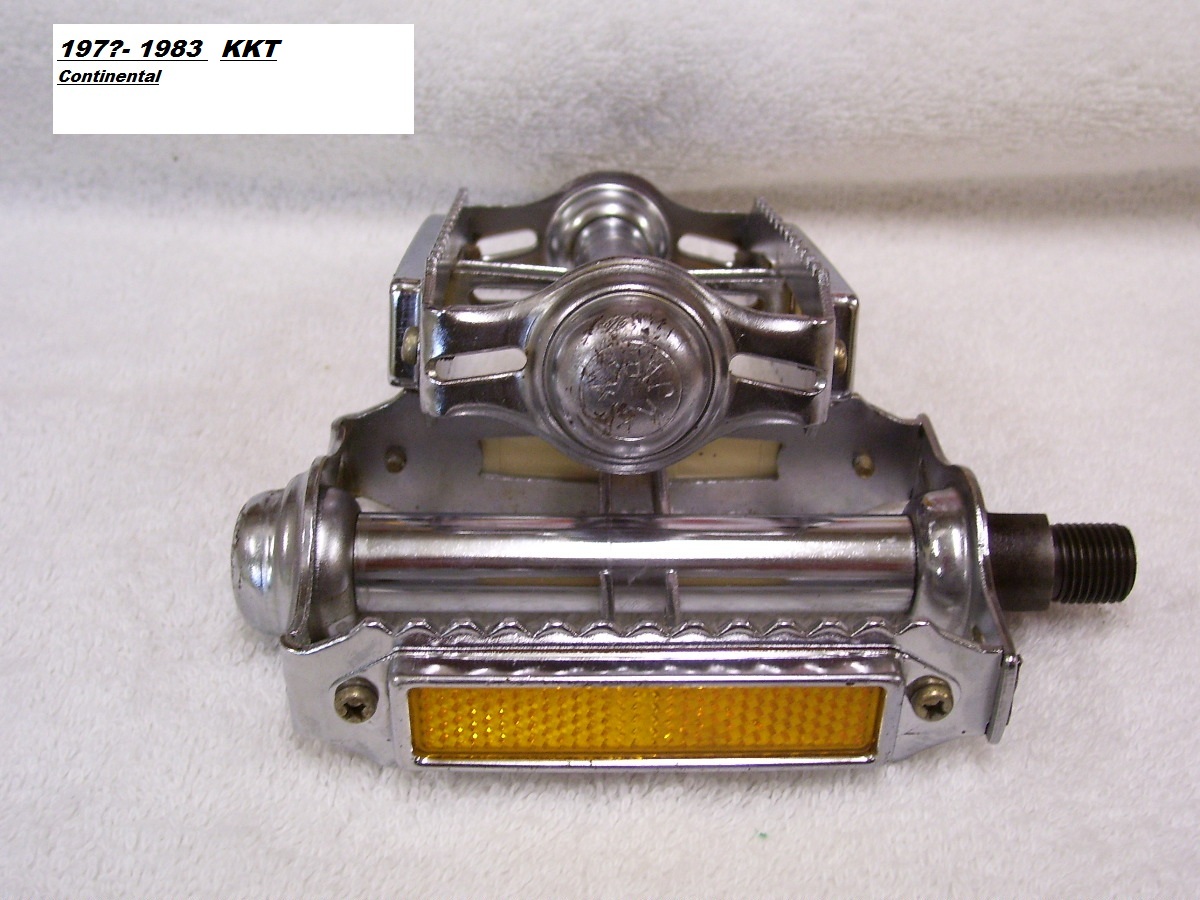 Suspended
Please take photos like above to capture the essentials with one photo.

Your best examples please, I'm taking pedals off my bikes for this!

I have to add the information to the image itself because when I try and edit or add photos, everything gets jumbled up.

I need examples for many lightweights as you can see, YOUR HELP IS NEEDED!!

Let me know if I need to add additional lightweight models to the pedals shown above.

I don't think that #1 was used on the Varsities. The Varsity pedals looked more like #2, but without the reflectors.

I'm sure Metacortex will be along with the definitive & encyclopedic answer.

I like this idea,I have many pairs taken from Schwinn lightweights through the years .I have no idea exactly what model/year they came from.I can at least post good pics,other than that I will probably have more questions than answers at first.
M

The 1st gen. Atom 440 (pedal #1 above) was used on high end drop-bar lightweights from 1960 through 1971. This included the Continental, Super Continental, Sierra, Super Sport, Superior, S/S Tourer and Sports Tourer, but not the Paramount. One exception I found was that the Continental was apparently downgraded to Union pedals (same as used on the Varsity) for 1963 only. No reflectors were used on these pedals during those years. These pedals have a unique alloy screw-in dustcap.

PS: The forum currently does not allow posts to be edited after 24 hours, making these sort of reference topics difficult to accurately maintain without it becoming a mess of more and more posts adding to or contradicting earlier ones.

Interesting aberration with the '63 Conti. Another '63 aberration that I have noticed is that the '63 Varsity used low flange Atom wheel hubs.

Suspended
PS: The forum currently does not allow posts to be edited after 24 hours, making these sort of reference topics difficult to accurately maintain without it becoming a mess of more and more posts adding to or contradicting earlier ones.[/QUOTE]

True, but it's worth a shot. The idea is to take what we end up with and make a new post minus the mess

As far as I see it, the hardest part will be trying to figure out exactly when did certain styles of pedals start and stop with certain bikes, i.e. how many years was pedal X used on Varsity's. I have no dealer parts catalogs so maybe you can answer this. Did part numbers change as the pedals changed for the same model bike?

Eric Amlie said:
Interesting aberration with the '63 Conti. Another '63 aberration that I have noticed is that the '63 Varsity used low flange Atom wheel hubs.
Click to expand...


The Varsity was equipped with the Atom low flange hubs from 1960 thru the 63 model year. The 64 model was the first to have high flange Atom hubs which had the Sprint markings. The 61 Coni's had the high flange hubs and it's odd they were not used on the 63's.

I wonder why the 63 Continental had a pedal down grade, or if that's a fact.
M

I believe the '63 Continental was downgraded to small-flange hubs in addition to the Union pedals. It may have been to distance it more from the Sierra that year.

Maybe it was the Conti that I was thinking of. It's been a long time, but I remember thinking it was an aberration when I ran across it.
You must log in or register to reply here.

Another cool pedal car in NY

Thursday at 3:51 AM
kirk thomas