The first Thanksgiving turkey of the day

I've finally gotten the Chinese Flying Pigeon that I picked up at the Westminster, MD swap meet this past February on the road and running. Originally the bike was a single speed roadster with a 46-20t drivetrain (a bit too high for the kind of cadence I like to ride), and a marked inability to go more than three miles without puncturing the rear tube - on the inside, the surface against the rim. After repeated efforts to correct the problem, I came to the conclusion that the rim wasn't allowing the tire to seat tightly enough, so it was shifting under pedaling, rubbing the tube against anything that I was using for a rim strip and eventually allowing small tears to form in the tube.

Thanks to BKH, who supplied me with pretty much everything he was stripping off a Raleigh Tourist, I've now converted the bike to a 3-speed using a 46-23t drivetrain (identical to what I'm using on my Raleigh Tourist), and much more comfortable for riding. 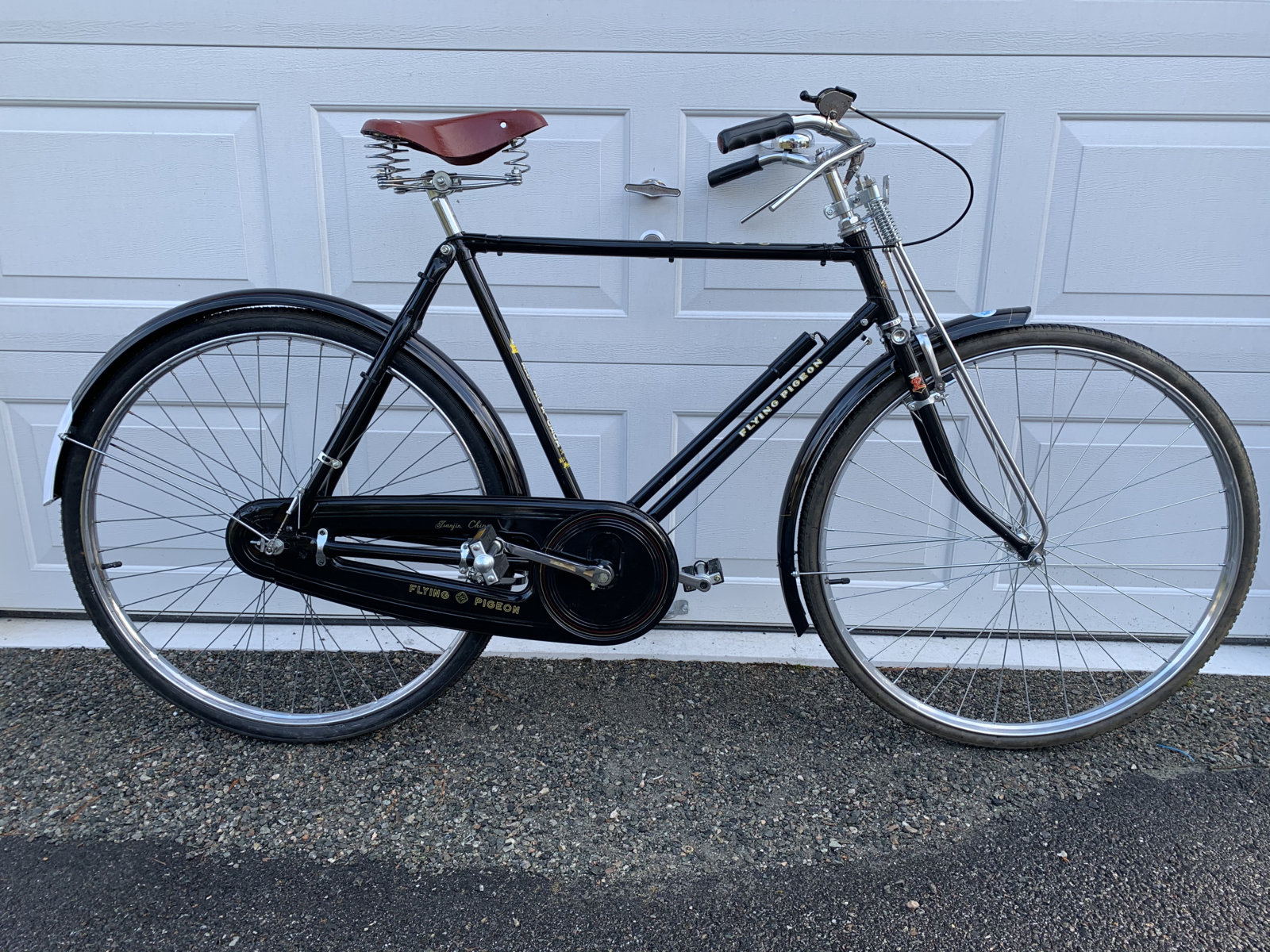 Considering that both this and the Raleigh are ostensibly the same bikes (my understanding is that this is a licensed copy of a 1920's Raleigh roadster), the two bikes couldn't be more different. First off, there's the build quality - or should I say lack thereof. I never knew a bike could be this big and this heavy, and still be this rattly. It's definitely slower. I'll use the Raleigh for commutes of up to eight miles one way, and usually keep an average speed of 11.8mph on the ride. Today's break in run, done on my usual flat, easy, 5 mile loop had me holding an average of 10mph. And I definitely felt more fatigued when I got home.

Crazily enough, the brakes on the Pigeon work better than those on the Tourist - and I've got Kool Stop salmon pads on the Tourist. The chainwheel on the Pigeon has a slight warp to it, ensuring that about three teeth rub the inside of the chain case once every revolution. I've attempted to pound the chain case out internally, but as luck would have it, this rub point is exactly where the chain case bolts to the seat tube. I'll live with it for awhile until the damn thing rubs down. Or through.

This is going to be an interesting playtoy. One of the reasons I grabbed it (besides the seller only asking $50.00) was for a replacement for the 1935 Armstrong I lost in the shop fire last November. I can see having some fun with it.

Great edition to any collection. When I was in China, she ocean size parking lots crammed with bikes. Most were copies of captured Japanese bikes from WWII. If one is stolen, they track the thief down and they have too many people so 1/3 of a million are shot each year. Little or no crime and the lights are off in stores at night.

Between Thursday and today, I've put about 8 miles on the bike. And walked it home this afternoon . . . . . . with a punctured FRONT tire. Will get back to this on Monday.

Goldenrod said:
Great edition to any collection. When I was in China, she ocean size parking lots crammed with bikes. Most were copies of captured Japanese bikes from WWII. If one is stolen, they track the thief down and they have too many people so 1/3 of a million are shot each year. Little or no crime and the lights are off in stores at night.
Click to expand...

And some people say negative reinforcement doesn't work! My dad never listened to those people.
B

Great looking bike. I like the really slack angles and all the fork rake. Just laying a couple of pieces of paper over the picture though, it looks as though it has almost no trail. Is it squirrely at low speeds?
Last edited: Nov 29, 2020

Handling is entirely optional. My Raleigh Tourist is a sports bike by comparison. It's not an easy bike to ride. Did fifteen miles today on my '69 Raleigh Sprite (essentially a Sports but with a Sturmey S5 hub) keeping an average speed of 11.4mph. I was supposed to use the Flying Pigeon until it gave me the puncture yesterday (took it apart this afternoon, inside of the tube against the rim, just like the rear, so I'm in the process of cleaning up the spare Tourist wheel to replace it), and I'll seriously be struggling to keep over 10mph on it.

Cool looking bike, but Chinese so that says it all. RALEIGH was a quality machine, as were bikes made in the U.S. , Canada, and Japan Italy etc..etc.... China makes some good stuff, but look where it's got us. Cheers!
1

Nashman said:
Cool looking bike, but Chinese so that says it all. RALEIGH was a quality machine, as were bikes made in the U.S. , Canada, and Japan Italy etc..etc.... China makes some good stuff, but look where it's got us. Cheers!
Click to expand...

The Chinese can build just about anything. Just not as well.

They can do better if you want to pay more. Few people do. They say that they can copy anything except your mother. I buy their $11 jeans. How much would I charge if I made them myself?

Two weeks since the initial report, I've put 55 miles on the bike with only one minor adjustment needed (crank cotters needed pressed in better, will definitely need replaced with better ones sometime in the near future). It's reliable. It's reasonably comfortable. It rattles, and due to a slight warpage in the chainwheel there's a scrape inside the chaincase that cannot be adjusted or beaten out. I'll live with it.

Compared to my two commuter Raleighs (Sprint S5 and Tourist It's slower. Much slower. Running all three bikes geared to within two gear inches of each other (the Flying Pigeon and Tourist are identical) in direct drive (all are set up with AW's), I keep an average speed of 10.5mph on the Flying Pigeon, 11.7 on the Tourist, and 11.8 on the Sprint. The frame angles are even more lax on the Pigeon than the Tourist, so handling is an entirely in proportion between the two. The Tourist almost handles like a Sports in comparison to the Chinese bike. And my heart rate is definitely elevated while riding the Pigeon over either of the Raleighs, thus backing up my impression that I'm working harder.

Now, there was one big surprise that I didn't expect. Understand, I'm 70 years old, 5'10", weighing in the low 170's, and I ride daily (weather permitting, of course) a minimum of five miles a day on one of the two Raleigh commuters, and at least one day a week knocking out 20-40 miles on one of my derailleur bikes (all European dating from 1959-1992). And I've been doing this daily since I retired in April 2019, and especially this year since the self-sequestering leaves me with a lot of time and nothing to do. Once I'd worked out the last bug on the Flying Pigeon, I took it for it's first intended 5 miles loop around the neighborhood. I was having fun, the bike was working, I'm in the process of getting used to it, and it was a warm, gorgeous day. By the time I got home, I'd knocked out 11 miles. Had fun.

And when I got out of bed the following morning, I couldn't stand up! Screaming pain in the lower back, buttocks and upper legs! You'd have thought it was the first time I'd gotten on a bicycle since my college days and I got stupid as to distance ridden. I guess the setup of the bike uses a lot of muscles differently from the Brits (I never had a physical adjustment problem between my Tourist and the Sprite, or any other 3-speed I own/have owned), and from the registering of my heart rate, I'm using my body a lot harder to get the same speed and distance in.

Happily, taking it easy for a day or two (I continued to ride the Flying Pigeon rather than switch over to one of the Raleighs) and my body quit hurting, and as of today I'm doing just fine on it. That said, the bike is not going into the commuter line with the Sprite - while fun to ride, it's a lot more work and effort for the results it delivers. My local commuting is done within a five mile radius of the house, that has three major shopping malls within it, and the bicycles are used completely as long as I don't have to haul major items. I may end up using it during baseball season when I go to Richmond Flying Squirrels games (season ticket holder), saving myself parking by driving to within a mile or two to the stadium, parking in a local free lot and cycling down to the game.

Incidentally, discussing this bike in another 3-speed forum, another member mentioned that he'd passed on a chance to pick one up (the seller was asking a lot more than what I paid for mine), and the ad for the bike mentioned "having Slime in the tubes". Looks like my problem of the wheels internally ripping tubes apart isn't confined to my bike alone.

If you have a chance to ever pick one up, do so. If nothing else, it's a wonderful chance to experience what bicycles were like back between the wars. Just don't pay too much, and expect to do some troubleshooting. I eventually intend to rebuild the original wheels with good European rims (once I find them), and we'll see what happens from there.
You must log in or register to reply here.
Share:
Facebook Twitter Reddit Pinterest Tumblr WhatsApp Email Share Link
Top