In @Sven 's thread that inspired this one, there was a lot of discussion about "how bad are they?" Is the vitriol against them simply snobbery? After all, there have always been cheap bikes. Are they just bad due to poor assembly at the store? Are they crappy to the core and impossible to make work at all? I've often heard it said that if the dad who bought one for his kid had gone to the LBS and spent 3 times as much, he would STILL be money ahead by the time he had a working bicycle, and then it would probably still be heavier than it needs to be.

On some level, all of these things are true.

One thing that stuck out to me in @Sven 's thread was that people were saving parts off of these. If they are crap to the core why are people saving the parts? I get it now.

When I was a kid, one of several kids in my neighborhood working on a lot of bikes, there were a few brands that were just to be avoided. I'm not going to name names, and to be fair I had a terrible understanding then of who was manufacturing what. Nevertheless I could usually look at some department store bike and know that there wouldn't be much usable because the parts would be too soft. There would be bent steerer tubes, stripped threads everywhere, crappy stamped stems that couldn't hold the knurling on the handlebars, etc.

This Walmart bike was still crappy, but crappy in completely different ways. One thing that stuck out was looseness of threads. The bottom bracket to one-piece-crank threads shocked me, although after comparing with an old American bottom bracket, it wasn't as much worse as I thought. The thing that sticks out is that the threads weren't stripped. They didn't feel weak either, just harder to adjust. It works fine, runs smooth and the bearings were good. This was also true of axles. The cone threads were looser than expected. No thread damage, just a little harder to adjust. I had to straighten the rear axle. This bike has a freewheel, not a freehub. That's clearly a poor choice on a mountain bike in 2007 (oh wait, they called it a "scooter", didn't they?). The bent axle problem with freewheel hubs and heavy use is well known. I had trouble getting the axle straight. I think it is chrome moly. Even if it isn't it is a damn sight harder and tougher than the freewheel axles I used to buy for my own bikes way back when. The fork was bent on this bike, and although there were some things about that fork that could have been made better, straightening the steerer tube was hard to do, as was the rest of it. It is FAR stronger and tougher to straighten than any fork I encountered on a cheapo department store bike in the 70s. That must have been quite a wreck to make the mess I was fixing. It is pretty surprising, in light of the fact that Chinese steel takes so much heat for being horrible, that the steel in this bike is really good. The threads were all undamaged despite being looser than normal. The bearings were all good, even in the headset that obviously took a hit. I totally understand why people save the parts now.

It has been alleged that the main problem with these bikes is poor assembly by department store employees who understandably don't care. There are enough reports of failures due to over-tight and ungreased bearings on the Internet I am inclined to believe it is a thing. This bike however had grease in all the bearings. It goes deeper than store employees though. Take the Falcon freewheel on this bike for example. It was wobbly loose because it was shimmed incorrectly. The bearings were in fine shape, it had both pawls timed to land at the same time (a good design for strength), and it appeared to be brand new inside, with no bearing tracks visible in the black oxide. After reassembly with one less shim, it was rather nice. I feel safe in saying nobody took the freewheel apart. Even bike shops recoil when you suggest you might do that, and then where would the extra shim come from? A similar situation exists with the pedals. One pedal had one more bearing ball in it that the other. I don't believe some dad took this apart either. It is not obvious how to do it. Oh yeah, and they painted the bottom bracket cups with the frame and let the bearings grind through it. This sloppiness had to occur at the factory, and can't really be blamed on lazy or underpaid store employees.

Now lets talk about the drivetrain. The front derailleur was mis-manufactured and probably never even tried to work until someone wrapped some strands of the shift cable around the nut as if it were a wire on a terminal. Even now it doesn't work right. The left grip shifter is not an indexing one by the way. It is a bunch of random clicks. The chainwheels have no pins or ramps (in 2007!). The derailleur does not look like it is even for a triple. Maybe it doesn't need to be, because the chainwheels are 48-42-36. Thats only 6 teeth between middle and top, probably too close for most triple derailleurs, so maybe it needs to be a double derailleur? I'm out of my depth on that. The trouble is it will not reliably shift from middle to top, it will sit there and rattle, but on every third or fourth try it will throw the chain too far and it lands between the outer chainwheel and the plastic bashguard. Yes, it is adjusted correctly. The way I see it this could have never worked. Then there is the matter of expecting some kid to shift it. One of the most common complaints about grip shifters online is that the kid cannot twist hard enough, either in the beginning, or after the shifter starts to age. They allegedly get harder to turn. This one has just been torn down, cleaned, lubed, and has a new cable. The spring tension on the derailleur is high!. Getting this up into the top chainring takes a lot of twist. It's as good as it can be right now, and I doubt a lot of kids could do it, even if it could be trusted not to throw the chain off.

Then there is the rear. It IS at the moment working and indexing, barely, despite the rear derailleur being loose at every joint. It is noisy, but it does shift and it does sort of index. The shifter is a downright horrible feeling thing, but could have worked fine in the beginning if you aren't too upset about chain noise. It is easier to twist than the front, but I wouldn't call it easy.

Then there's the brakes. I bought some new barrels at the LBS, and heated up the plastic handles with a heat gun and un-warped the threaded areas. The front is noisy but stops well. The rear is not so great, although it might skid with a lightweight kid on it. You might get more improvement by straightening the cantilever posts (they aren't welded on straight, so It's hard to say if you could correct it without ruining the paint). You could try some Kool Stop Salmon pads. It might be acceptable as is right now if you aren't too picky.

Finally there is the matter of what it would cost to fix it. If you were some dad buying this would you have been money ahead to go to the LBS and spend more? Plainly yes.

If we assume that you are going to keep the chainrings (probably you are because the bike has a one piece crank, and something better may not be available), the cheapest derailleur I could find on Ebay that had an upper clamp for a 28.6 seatpost (IMHO shims suck), triple capable, down pull, was $25.

Realistically we need different shifters because they suck, and because basically every thread about them on the internet is "my kid cant shift them on his/her new bike" or "they're 6 months old and now my kid cant shift them anymore". The obvious solution is trigger shifters. But wait, this is six speed at the back. Trigger shifters apparently came into being with 7 speed indexing. For 6 speed, mainly more cheap grip shifters exist, and that's all, the good ones having been discontinued long ago. It turns out one company, Microshift, makes 6 speed trigger shifters. They are still listed on the Microshift site, but out of stock everywhere. To get trigger shifters it would need to be converted to 7 speed. In 7 speed everybody makes trigger shifters. One good thing is that the Falcon freewheel, which has no ramps nor twisted teeth, would go away, leading to better index shifting. The rear spacing is 130, and I believe that is road bike standard spacing for 7 speeds, so a 7 speed freewheel should screw on and fit.

There is also the shock, that apparently got destroyed because someone didn't tighten it. The warning not to ride it before tightening was mostly obscured by the spring, so realistically this is probably going to happen. A new one is about $20.

Shopping carefully, Shimano Tourney 7 speed freewheels are about $24-$26, depending on which one you get. The rear derailleur needs a claw mount, limiting your choices. Shimano has the TY-300 and TY-500, both with a slanting parallelogram and a b screw, 7 speed capable, and available in a claw mount version, for about $20. A pair of Shimano SL-M315 shifters (their cheapest triggers) for a 3x7 bike are about $42. Adding in the front derailleur ($25), that leaves us with 99.95 (bike) +25(fd) +25(freewheel) +20(rd) +42(shifters) +$20(shock) and we are at $231.95, and I have not included any tax or shipping on parts. I have not included the cost of any of the smalls I bought for the bike in this thread. I have not included a complete service at the LBS either. Lets face it, almost no one buying this bike is a bike mechanic, and it probably needs all the bearings greased and everything adjusted. It also needs the wheels trued, because these bikes are widely known to be delivered with the spokes too loose. For best economy, truing needs to be done right off the bat so the rims don't get bent. I don't know what that costs at a shop. If you are critical of the brakes you might also need some Kool Stops (about $21 for both brakes) and if that still doesn't make it stop the bike without shrieking, maybe some less flexy brake arms made of aluminum (about $32 for both if you are thrifty). No doubt I have forgotten some hidden costs. It is easily going to be $300-$400 or more by the time it is working well enough to really put some miles on. And yes, it will still weigh more than it should.

On the other hand, from the little I rode this, outside of the unusable drivetrain parts and dodgy brakes, I sort of liked it. If one of these fell into my lap for free that was 26", or better yet 29", I might try to fix it.

bloo said:
I totally understand why people save the parts now.
Click to expand...

I confess....the 40t front sprocket on my 1936 Silverking klunker is from a girl's Walmart bike (Pacific brand) 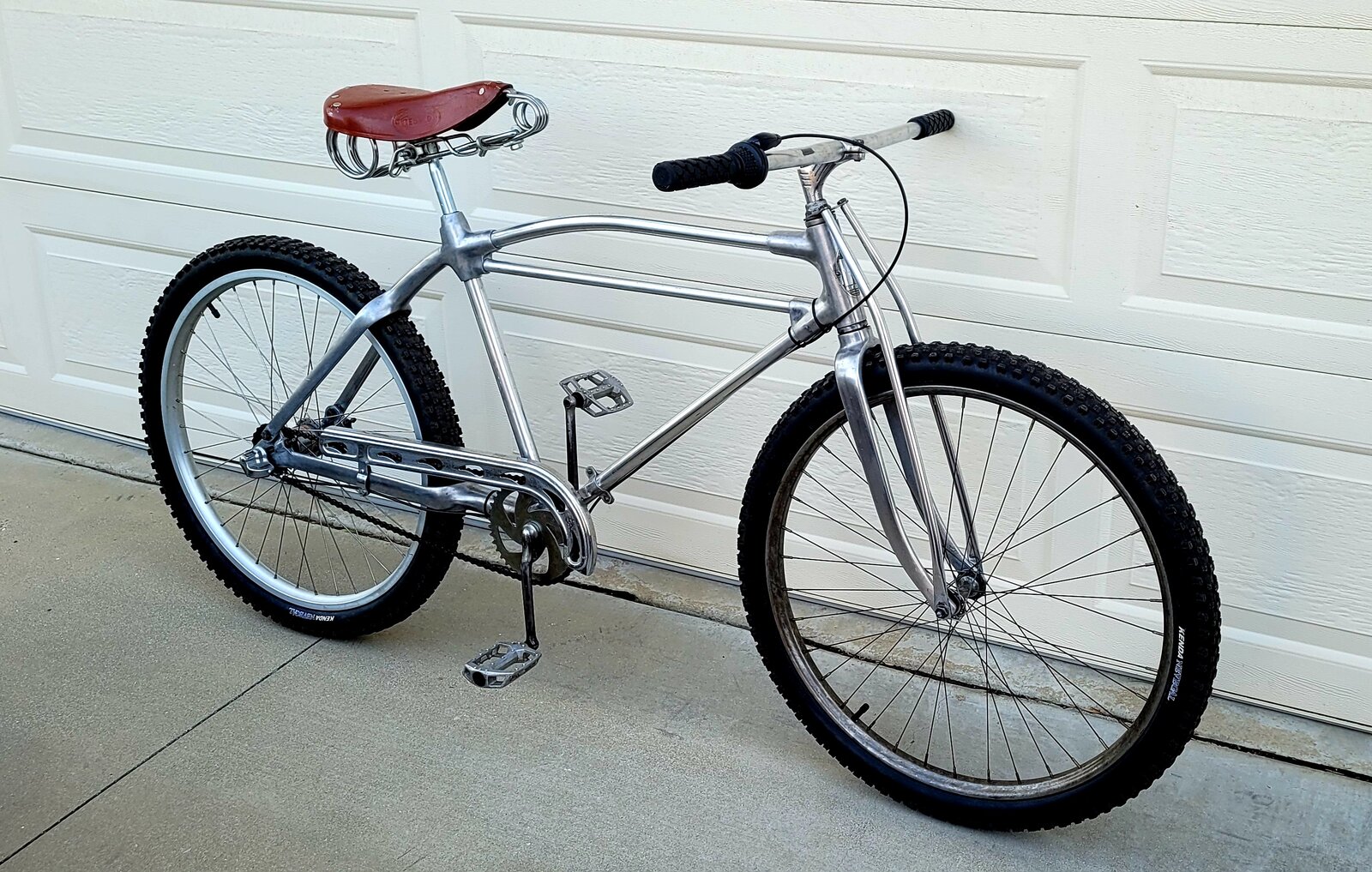 Don't let This happen To You!