Trying to bring a 1936 Motorbike back to life

I bought a black and creme Schwinn motorbike frame set at the Memory Lane swap meet. It was a frame, truss fork, crank and chain ring, A.S. stem and some Torrington handlebars. I bought a seat and pedals from my friend Pete. I already had a lucky seven seat post. I also bought a pretty nice set of wheels from Dave Stromberger.

Pete shipped it for me from Georgia to my house in Idaho. The day I got it I tore it all apart, cleaned and waxed the frame, cleaned all the bearings and cleaned the chrome parts.

The forks were bent so I took them over to Jeff Taylor's house and he straightened them for me. Jeff is also going to true the wheels. I can do an OK job but Jeff is a professional and can do a lot better job than me.

I also did some trading with my friend Kim and got myself a tank, rack and chain guard. I didn't think it had a tank originally but after cleaning it I found the markings of a tank and tank straps. I was pretty happy because it was the real deal!

Dave is going to paint the tank and rack and bang them around a little and make them match the paint on the rest of the bike. He's real good at it. I can't wait to get it done.

Here's what it looked like at different stages of working on it so far. I'm getting really excited, I've never had a motorbike before. Barry 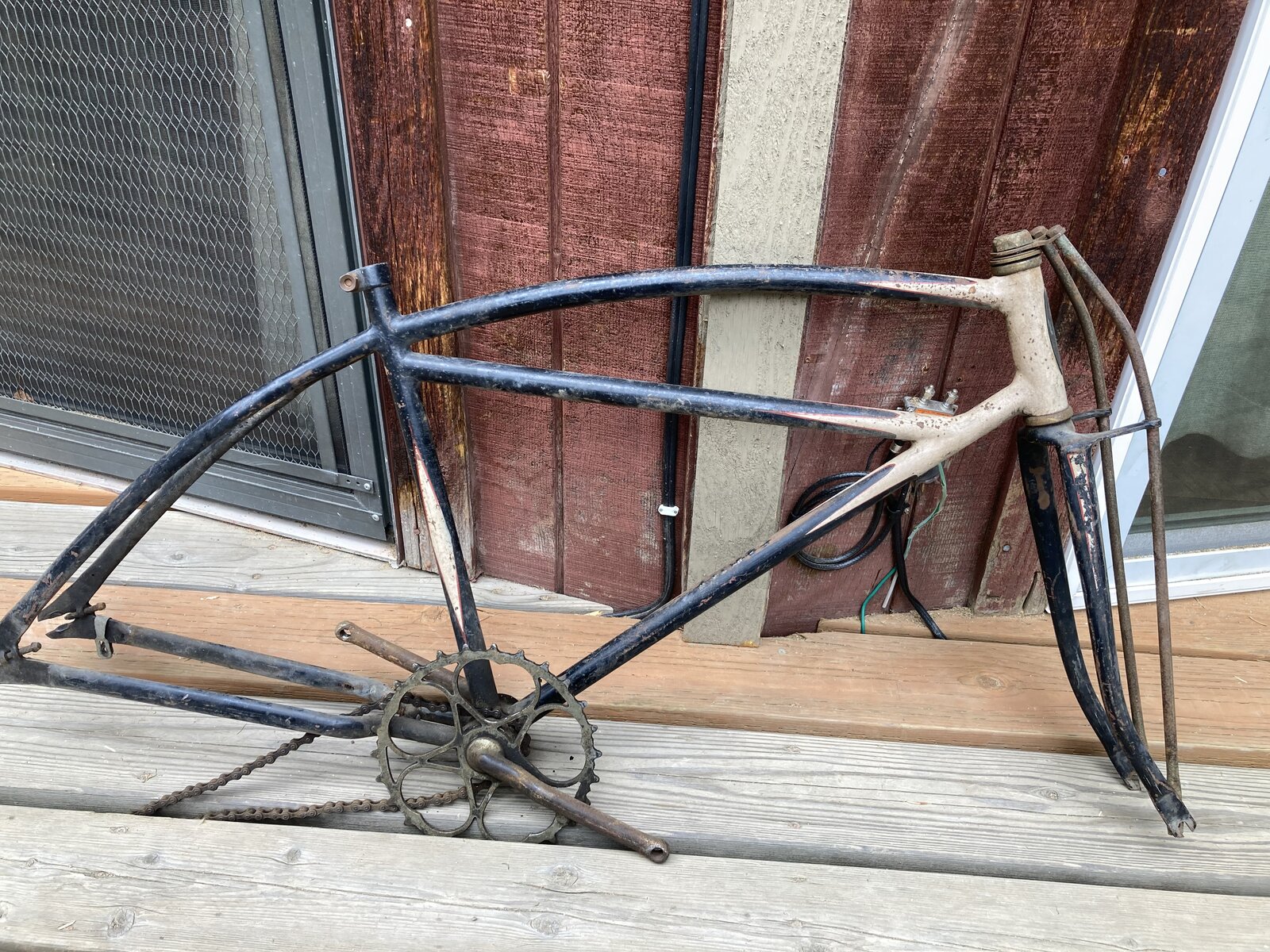 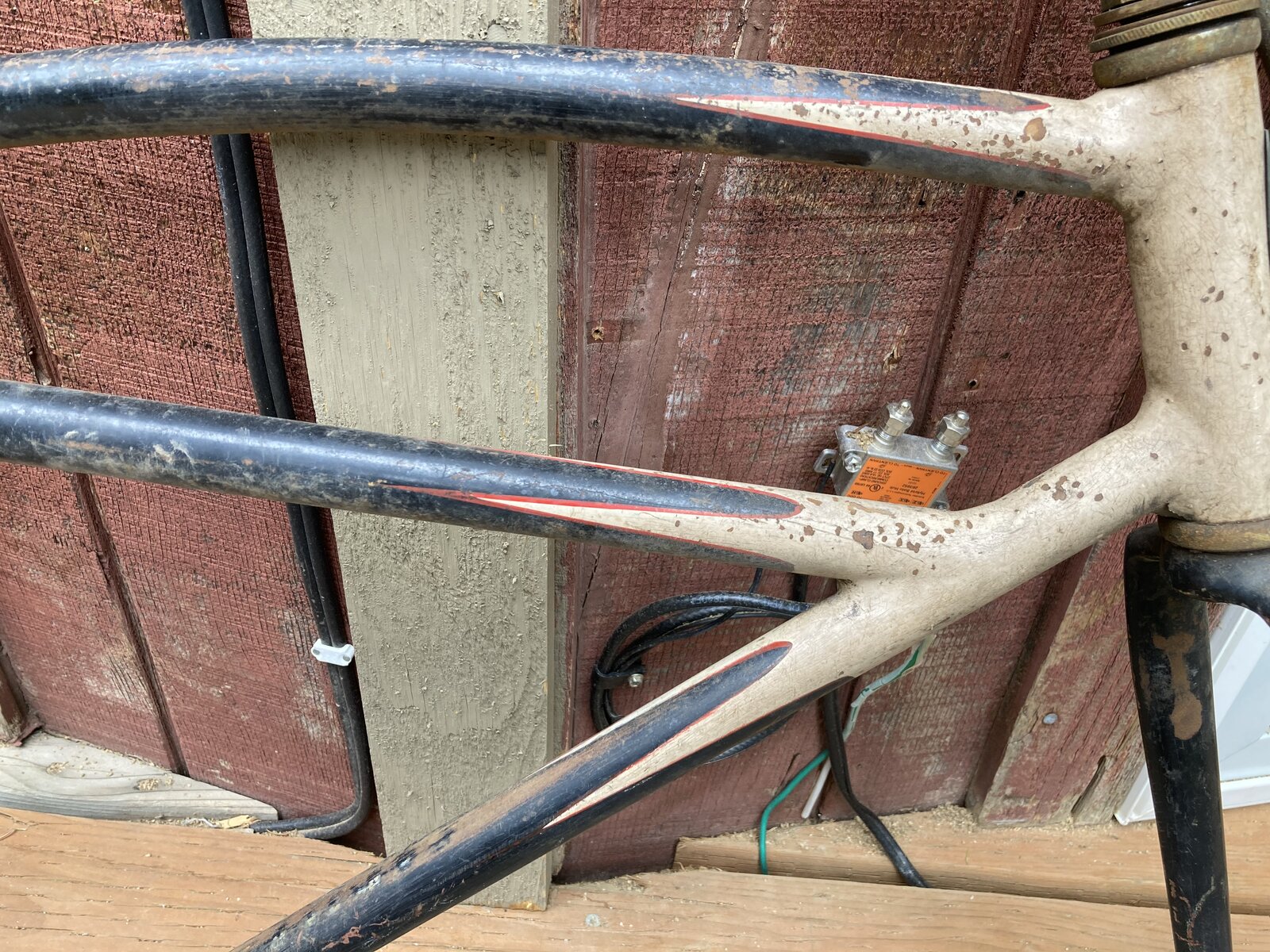 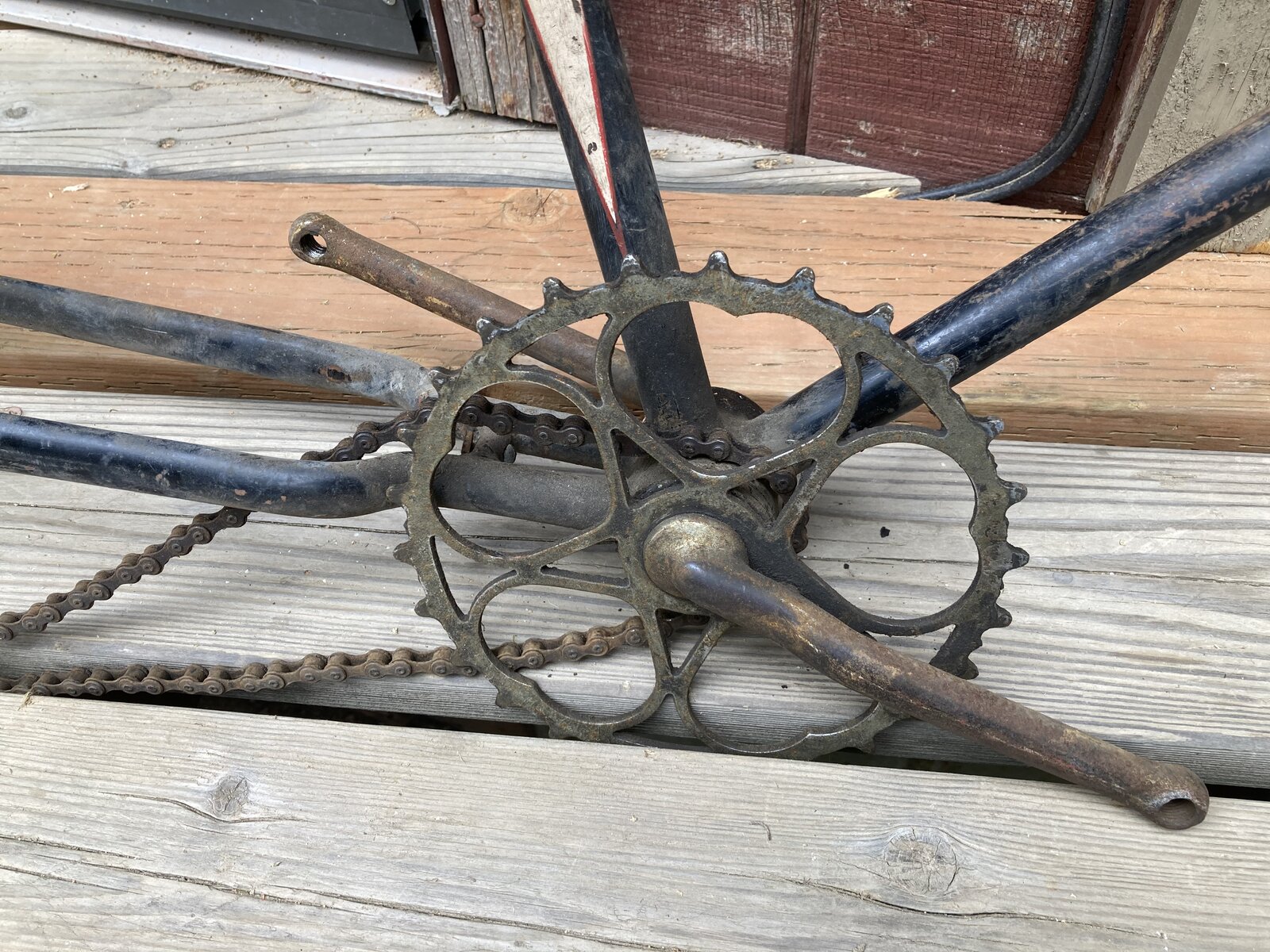 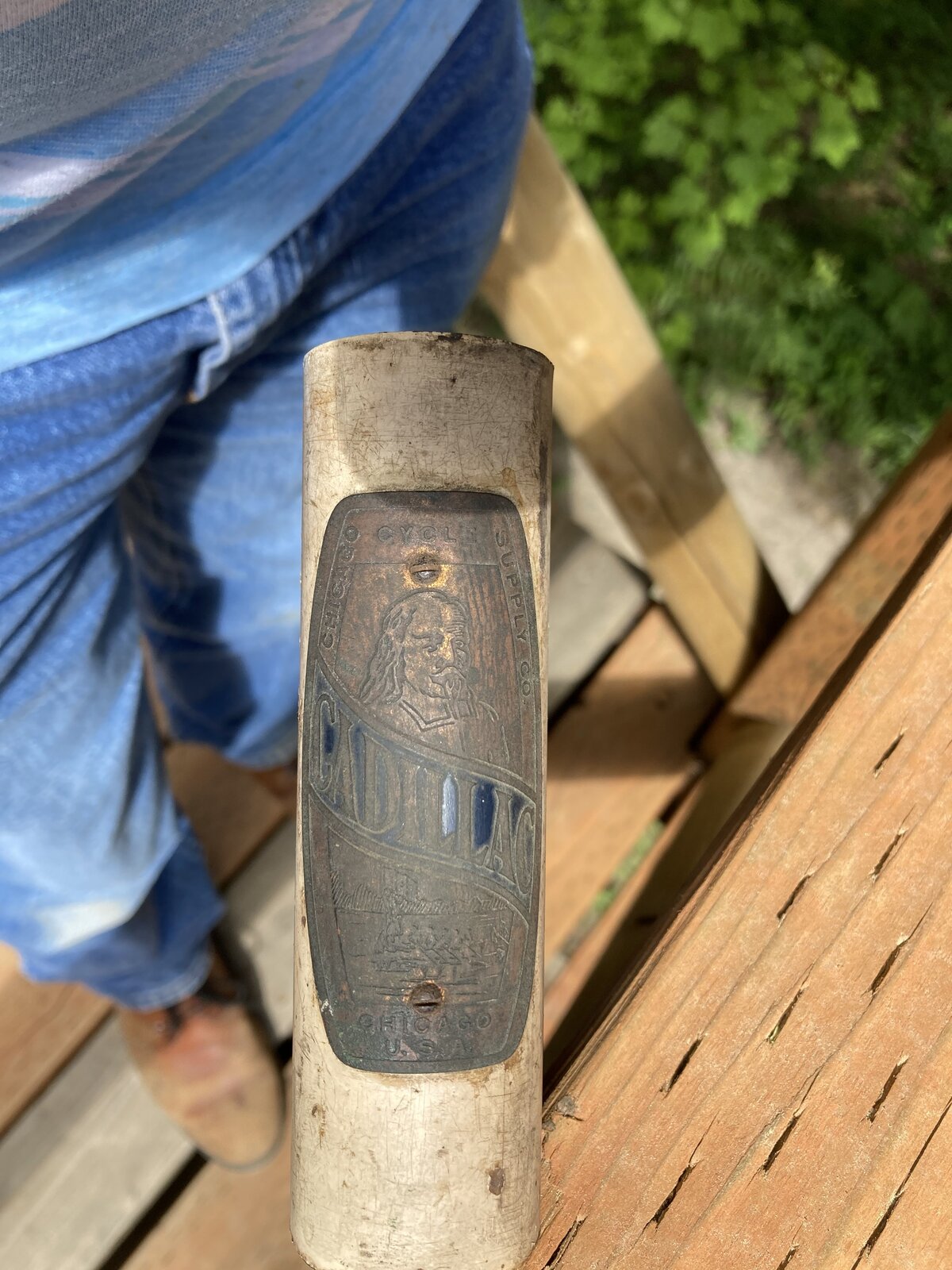 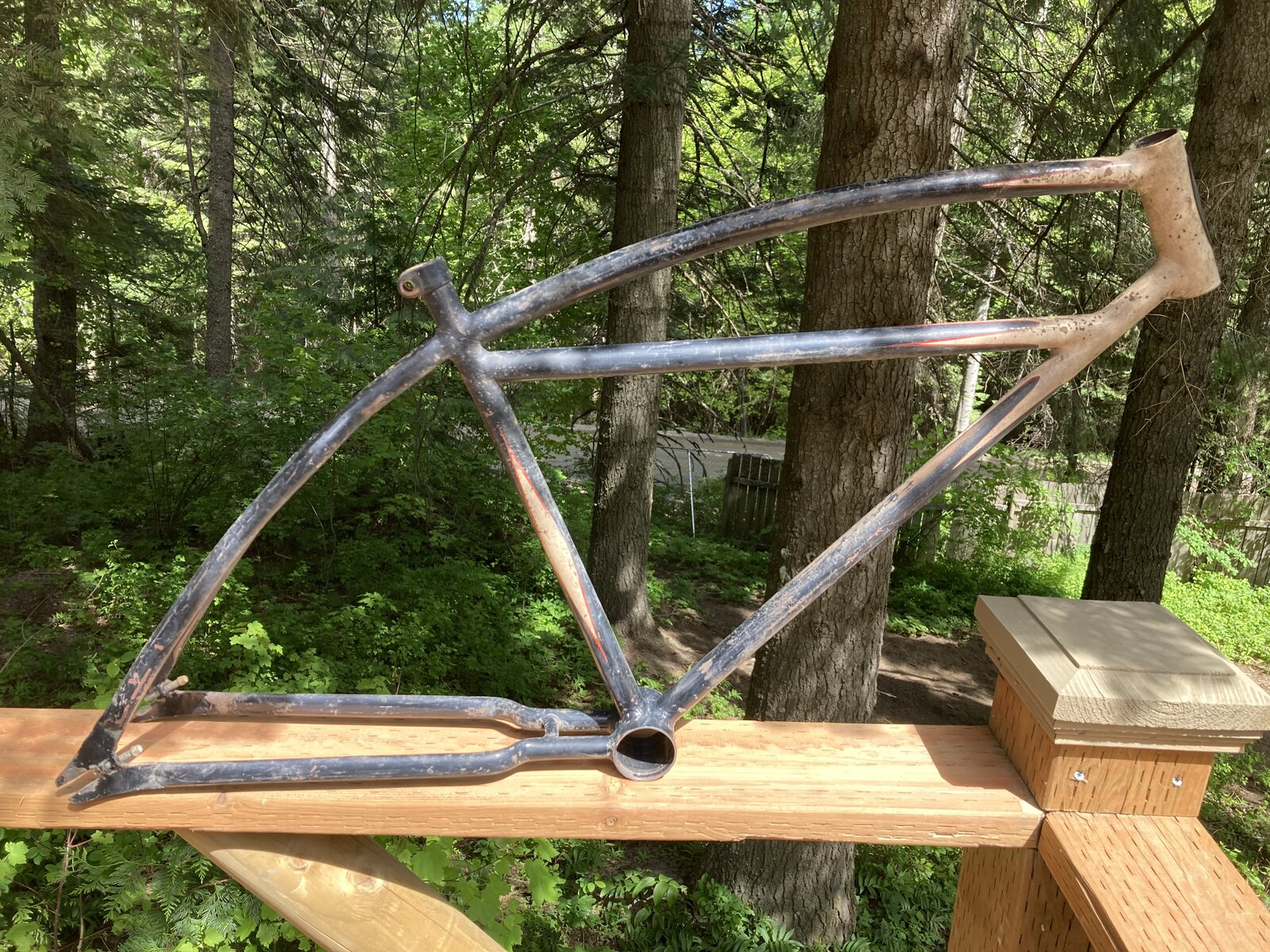 After I started cleaning it up 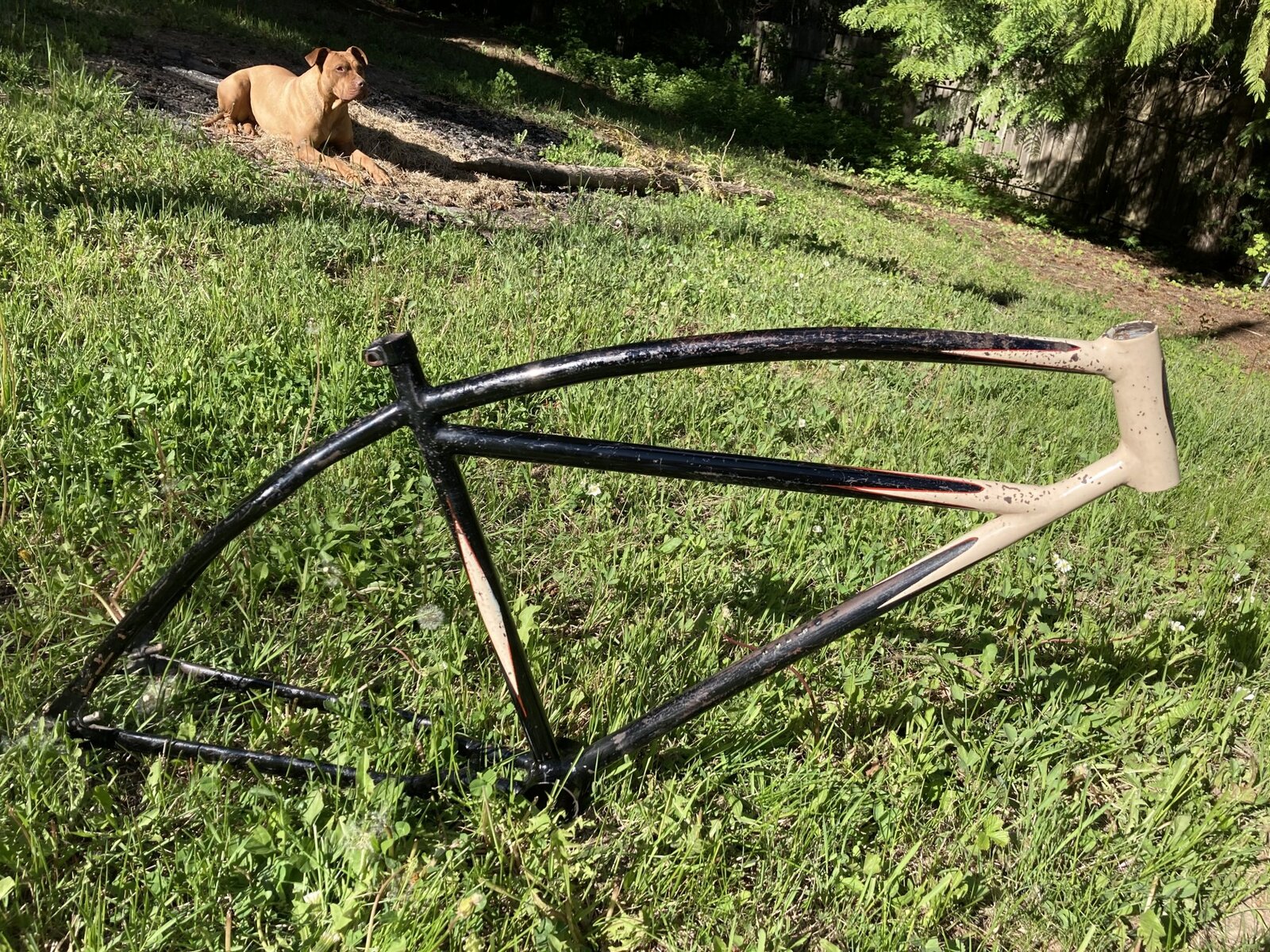 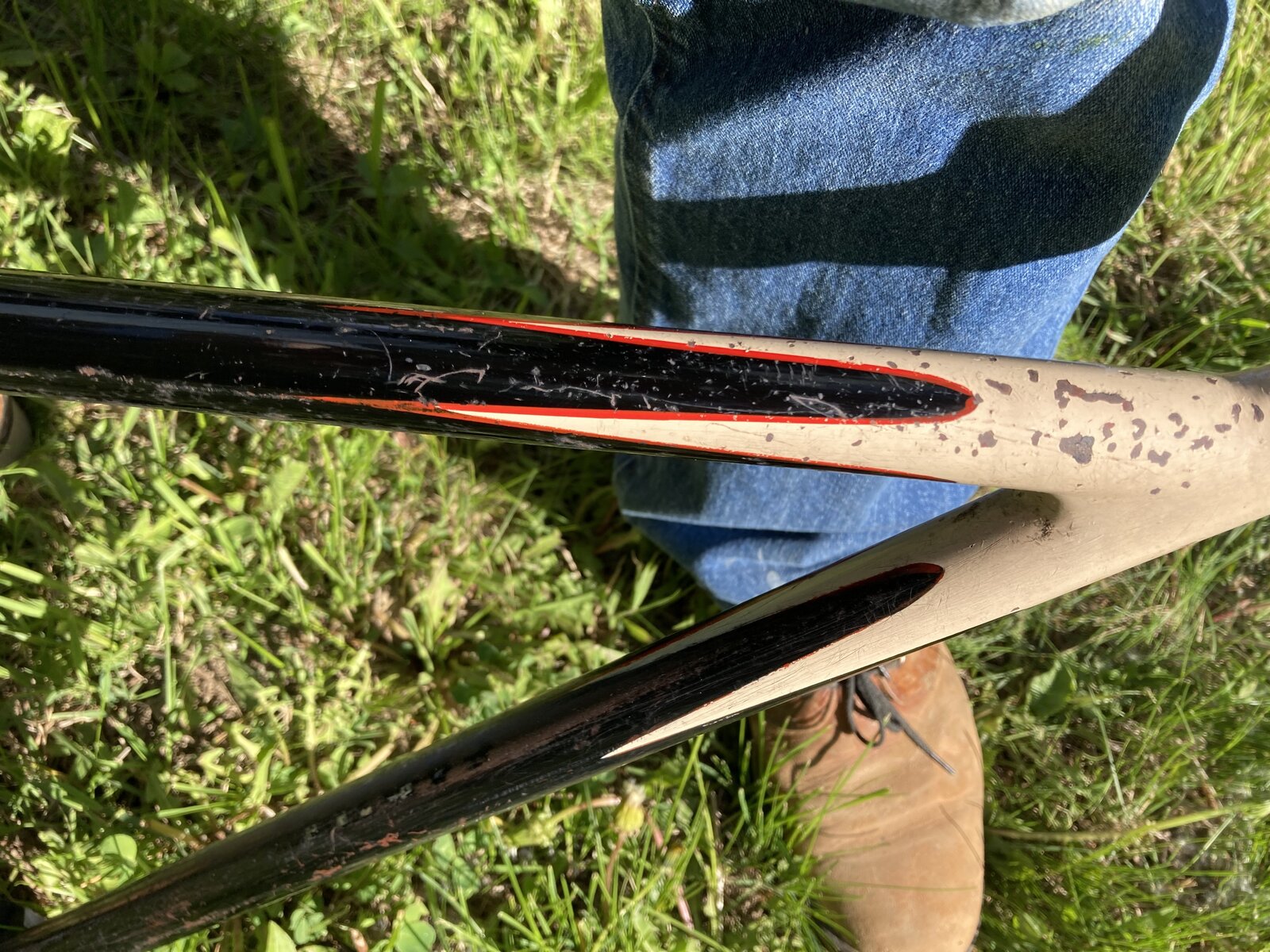 Starting to put some parts on it. 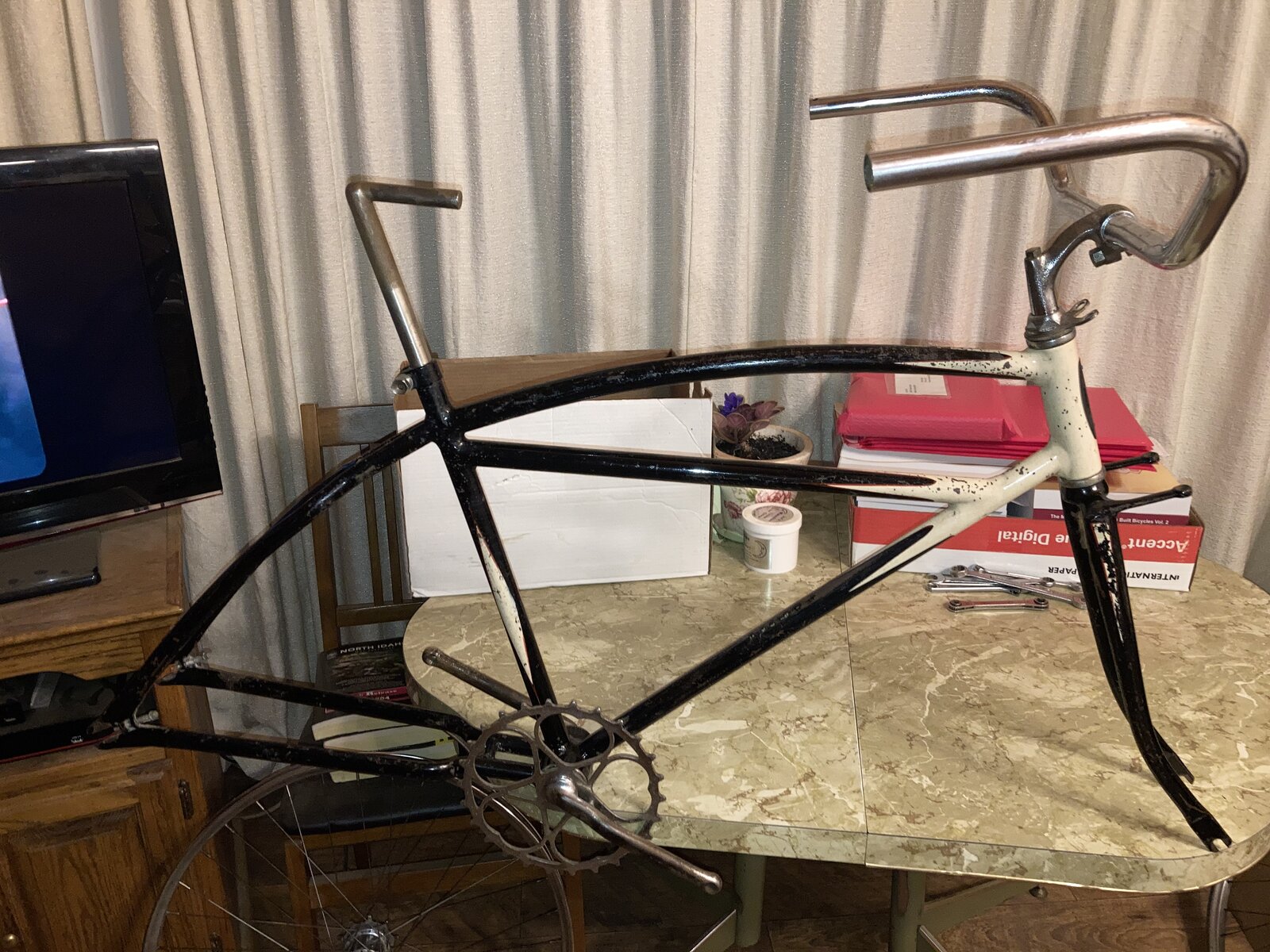 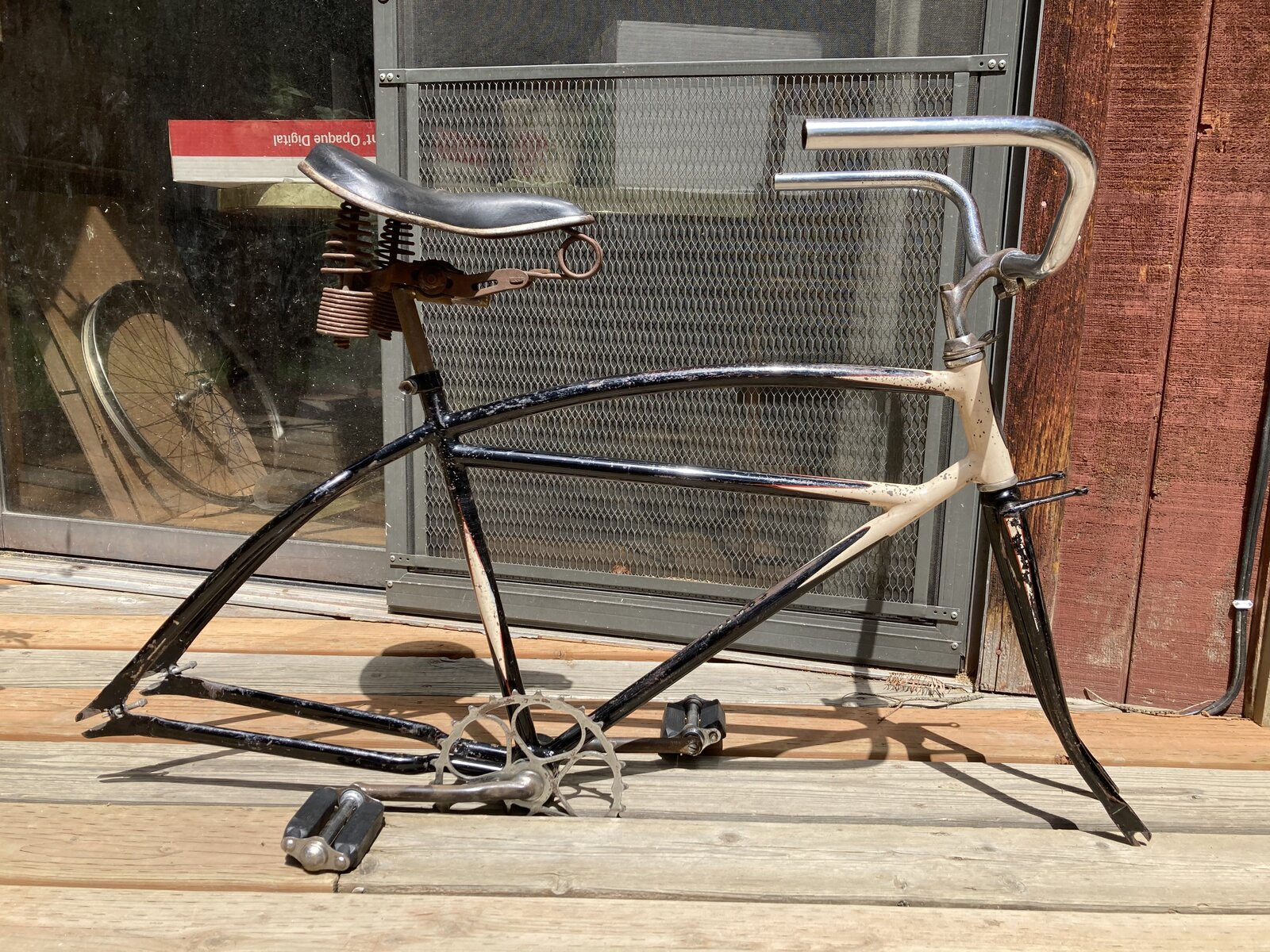 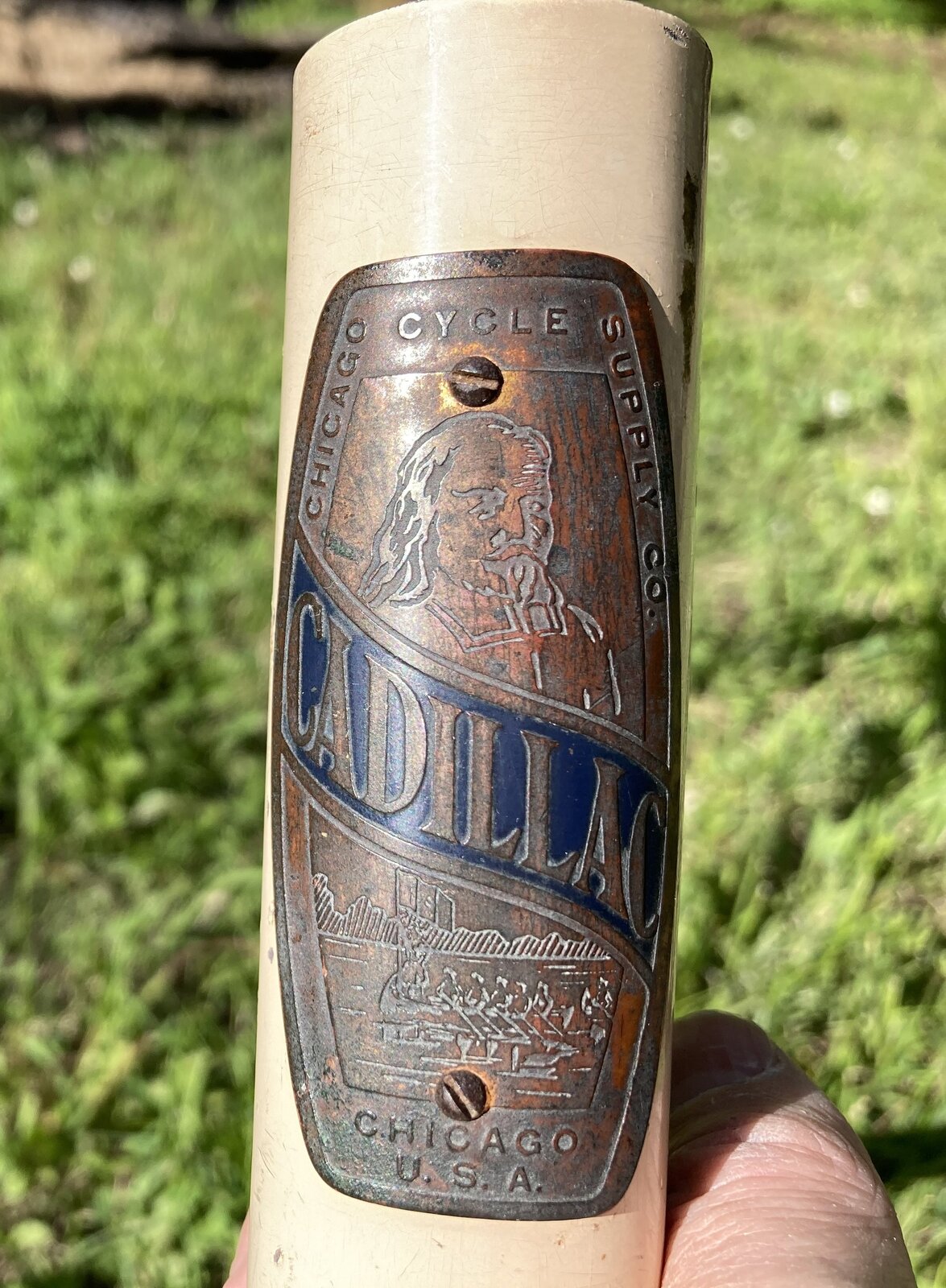 Next will be the wheels after Jeff works his magic. I already have some new red tires and some new tubes. I also have some red pedal blocks I think I'll be replacing the other with.

When and if I ever get any fenders, I also traded for a Silver Ray head light.

Looing good Barry! Sounds like you have a lot of the hard stuff a set of fenders will pop up. V/r Shawn

Freqman1 said:
Looing good Barry! Sounds like you have a lot of the hard stuff a set of fenders will pop up. V/r Shawn
Click to expand...

Thank you Shawn! I hope some fenders pop up. Barry

What a great project Barry ! I think your going to have a lot of fun with this one. Looking forward to the updates . GOOD JOB on the clean up !!

Took me 2 years to find a set of decent fenders, popped up in the most crazy way..a good friend went to eastern side of the state, came back with a bunch of bike stuff..after helping price stuff , at the bottom of the pile was a set of 37 fenders..I was flabbergasted.. Just got umpteen layers of paint off, dents out ,ready for paint. Can finally get the girls fender off.. 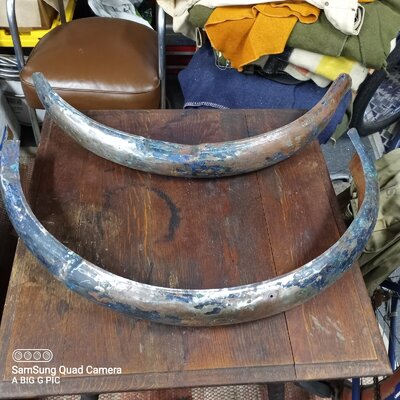 Very cool bike. I really like the original paint and patina. Looking forward to seeing it complete. Super cool!

Here it is with the wheels without tires. Ha Ha Ha

I had to put them on for a minute just to make it look more complete. I'm going to have the wheels trued this coming week so I can't put the tires on yet. I'm getting anxious! I bought a drop stand today. I just need those STINKING fenders! Barry

I checked into buying a horn and about fell off my chair! WOW! They're expensive! 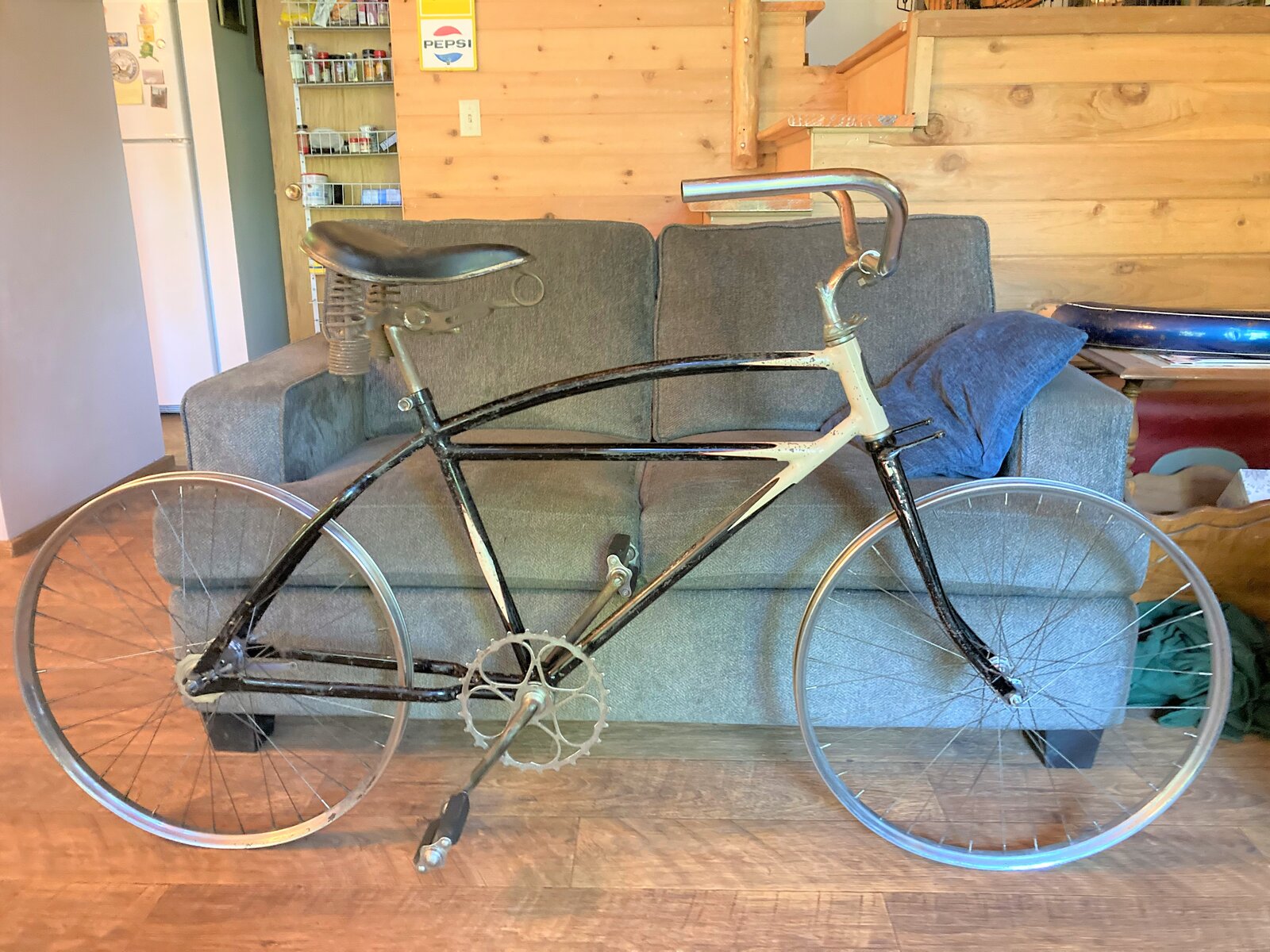