Yet Another Mead Crusader 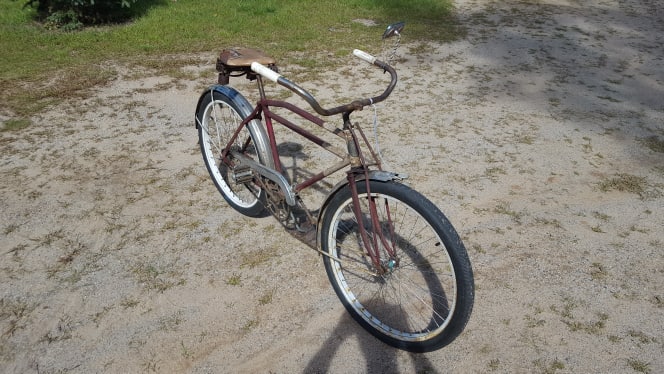 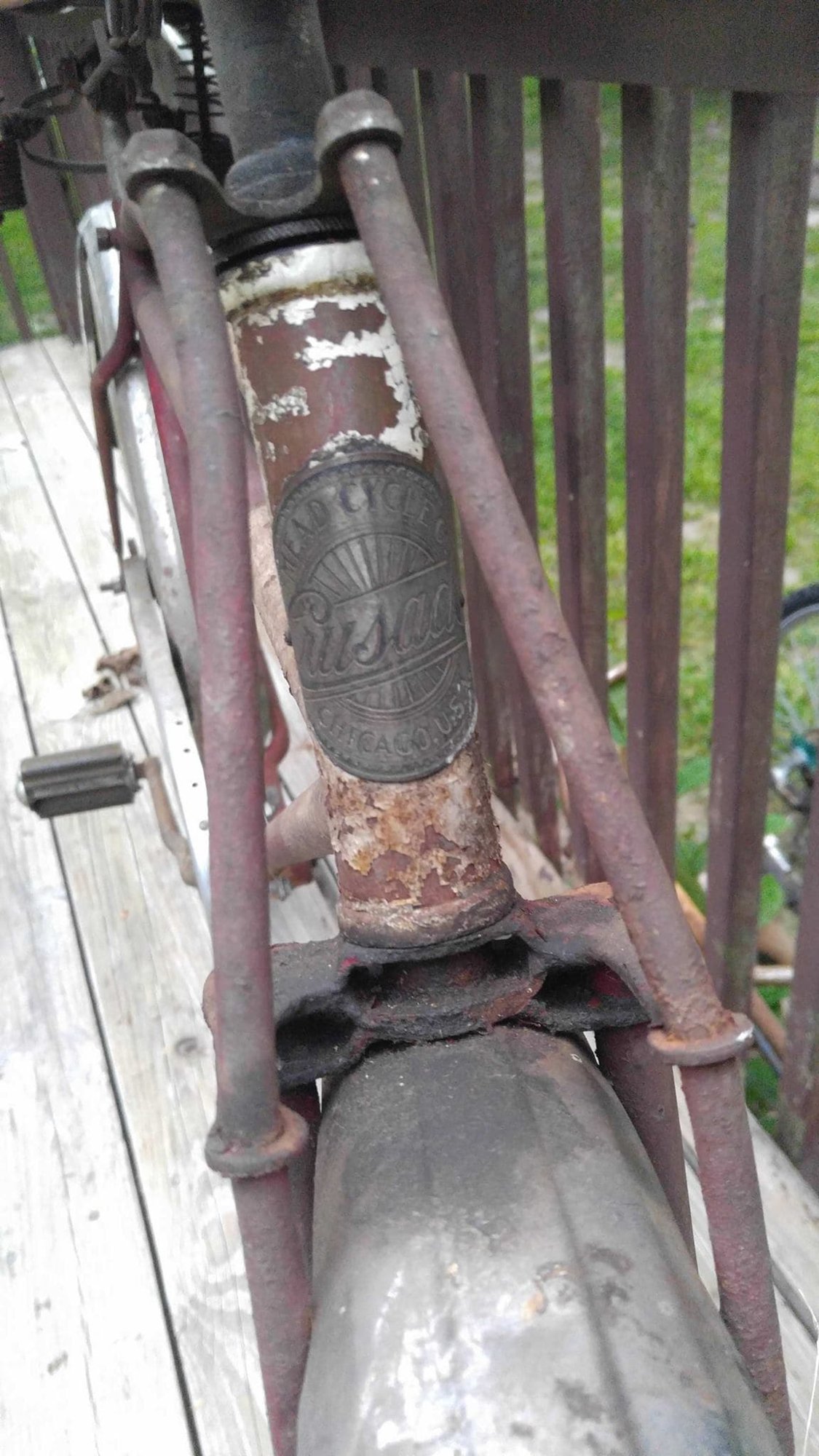 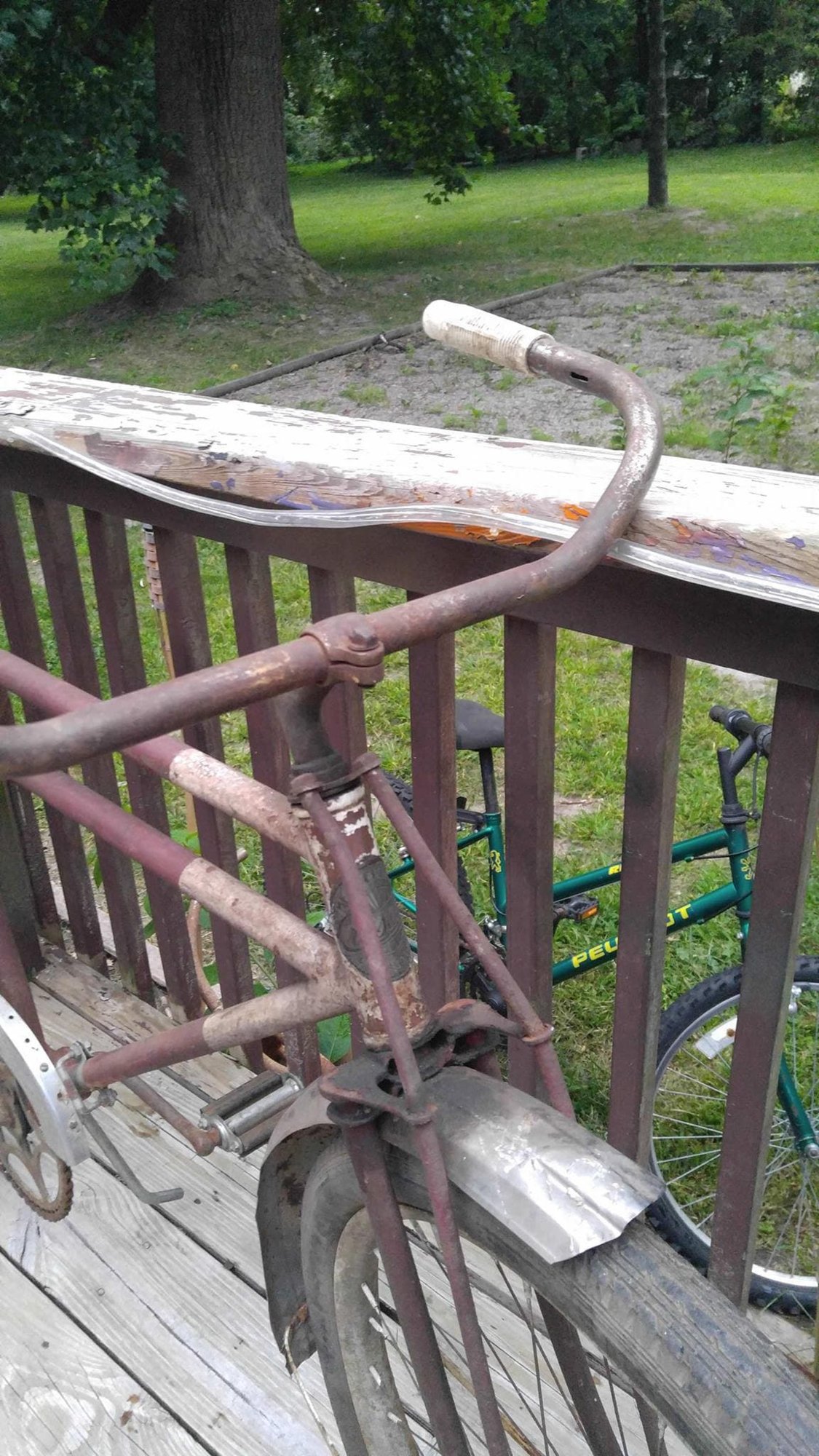 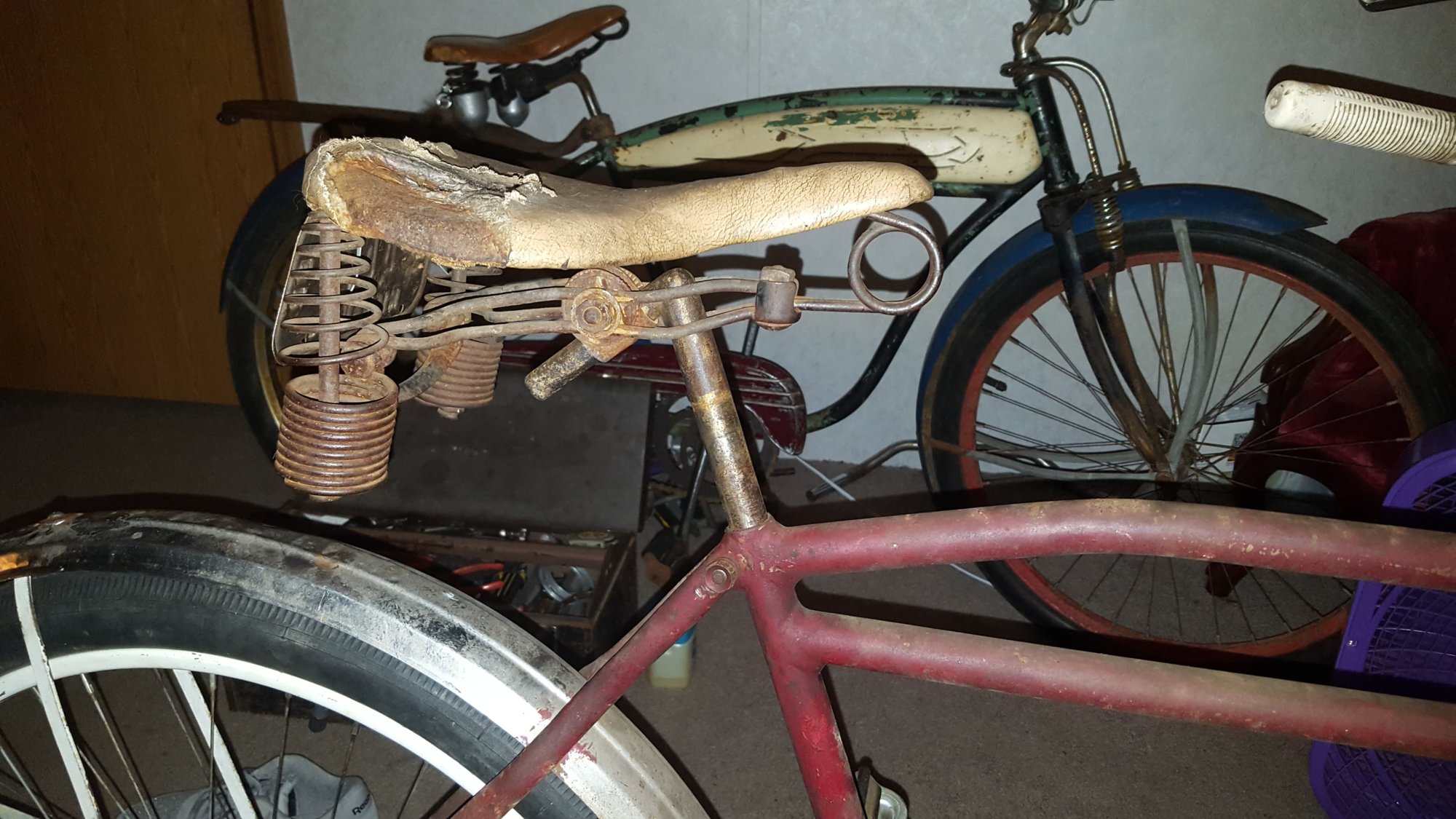 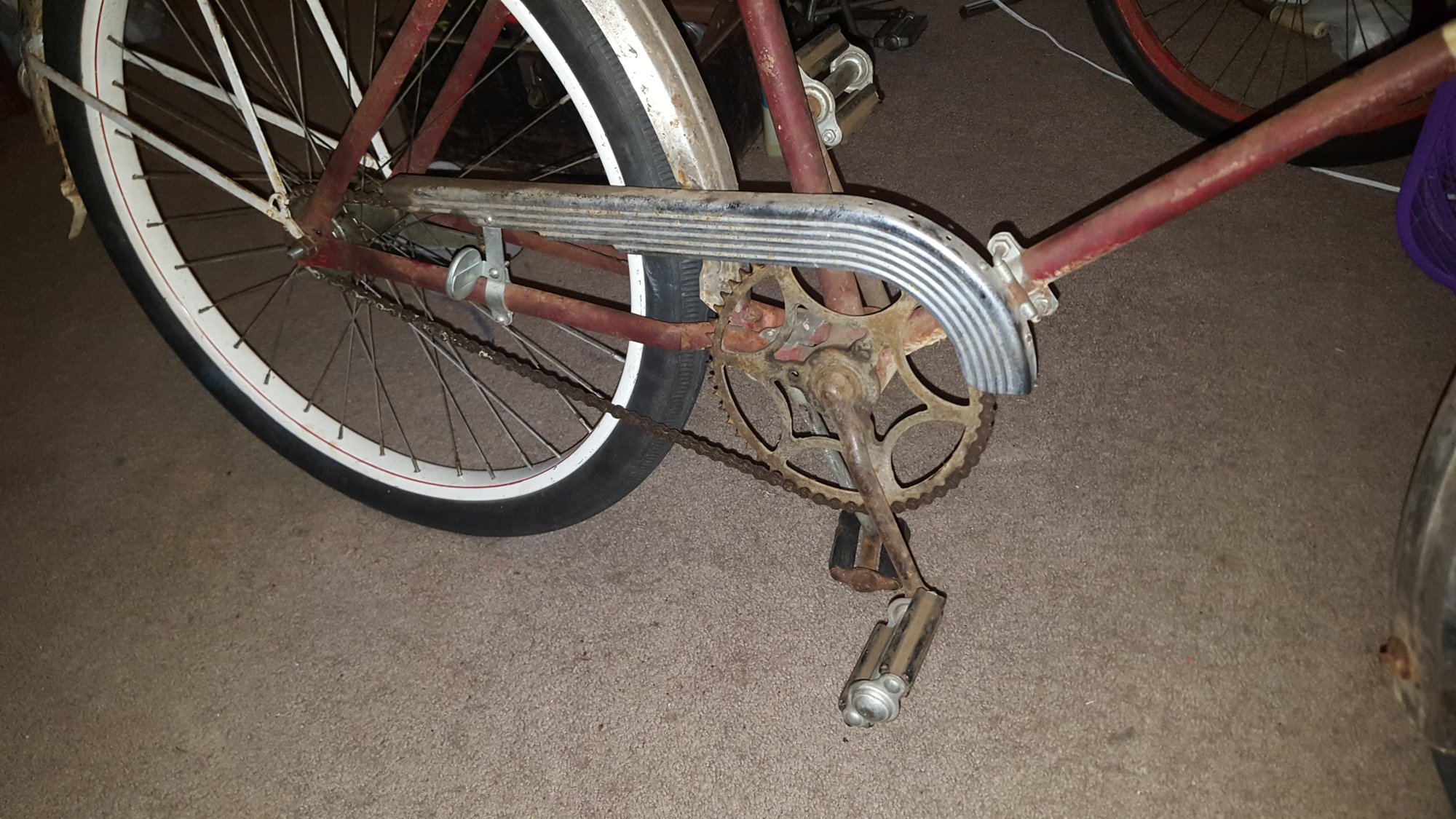 Needless to say it's mix and match with some odds and ends.

My questions are these:
Whats Original
What's era correct
What YEAR is this model?
Is there any value to it? 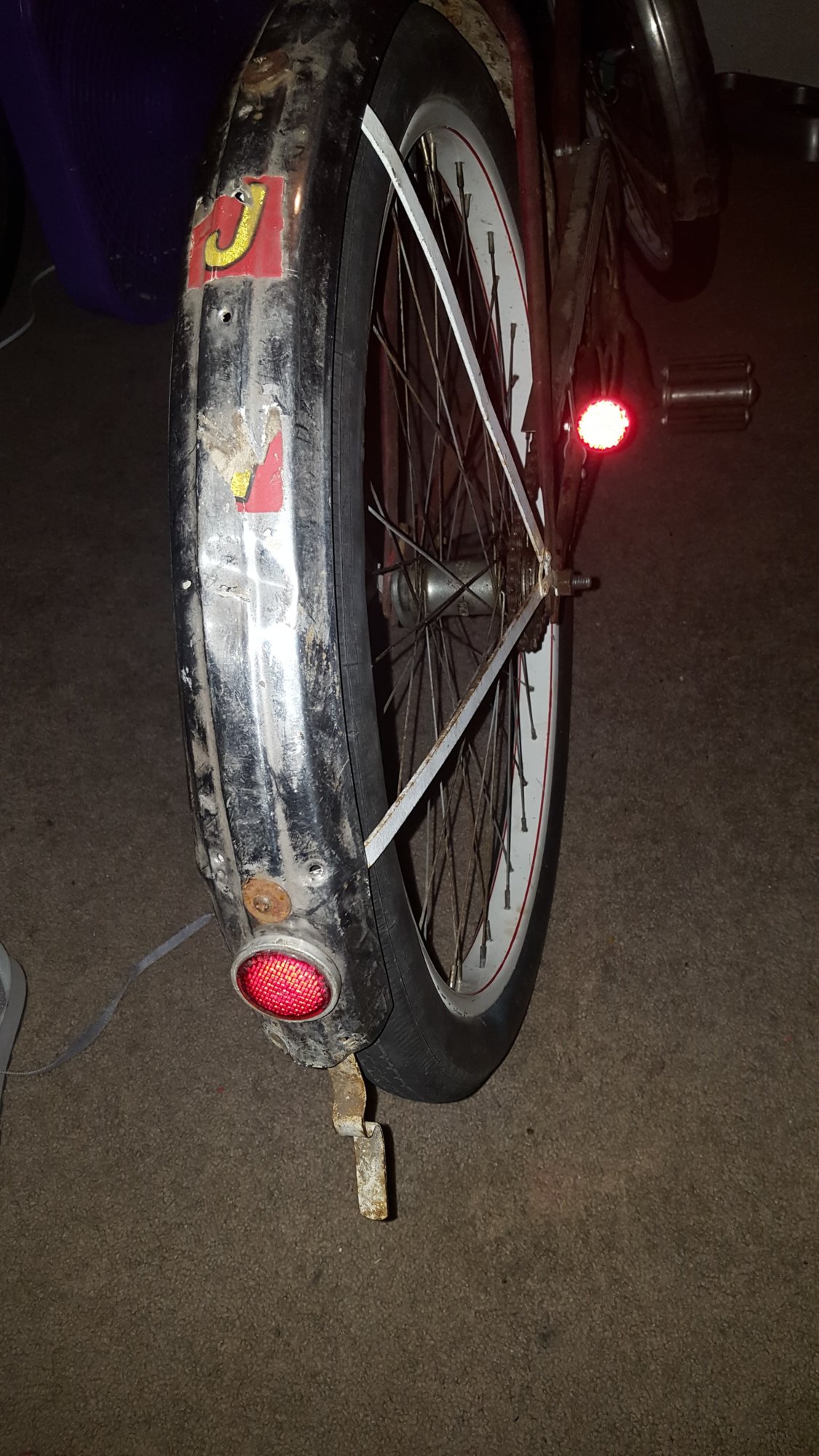 It's a balloon. So less common IMO.

Kickstand, rear wheel, pedals & grips have been changed and it never came with a chain guard.

Do you suppose the rest is correct? Paint and all?
The reflector on the rear stay, license,. Bell., I added those of course.

It looks like it's been repainted. I think the reflector would've been mounted in a different spot. Not sure what reflector it should have. Although the fenders have a few extra holes, I think they're correct.

The rear fender braces look like they came from a girls bike. They have the open spot for the lacing that kept the girls skirts out of the spokes.

I find this subject very interesting, because I just recently bought a couple bikes like yours. Mine are Schwinn built. Yours could be? Although those forks don't look like Schwinn, I've seen them on Mead bicycles that were Schwinn built. Mead used several different bicycle suppliers and mixed the parts together sometimes while assembling them. I found this to be especially true around the War years, when parts were scarce. Barry

Ya know, Barn., You're a wealth of knowledge if not in certainty, then at the very least in thought filled perspective.

I had wondered about the braces, being as white as they are in contrast to the rest of the bike particularly. Certainly not correct but at least within relative period, so expecting that, I'm not too bummed.

The fender reflector I may have added quite a while back too, though I don't recall for sure, either way, I think I'll end up replacing it with a tombstone Persons .331

The repaint proposal, I'm not sure sure about. At the time, I know they were at times painting the whole frame a base color then overlapping with the strikes or stripes which I guess makes sense to keep the coats looking clean instead of trying to do them edge to edge.

I'll see where it stands after a little Mineral Spirits.
I have had a few propose it could be Schwinn with the likelihood of being a '33., Of certainty I have none, but it feels good to hear pre-'35 on it.

@locomotion , Ive been told these are a little less common than the 28",. Sort of a middle period bike between the TOC and tanker stuff rounding the deco details on vented front ends, springer forks and the like.

I really like that it's Ballooner in the ease of finding parts easier abd more affordable with basics like tires, spokes etc.,

It'd probably be a small fortune to do a full restore on this, which doesn't bother me a bit. I like it's crust and the comfort to mix and match on it without concern for doing wrong or adding a bad match for the make or era., Its not perfect but I also won't be afraid to ride it.
Oncoming for it will be a few parts I've stocked up on. 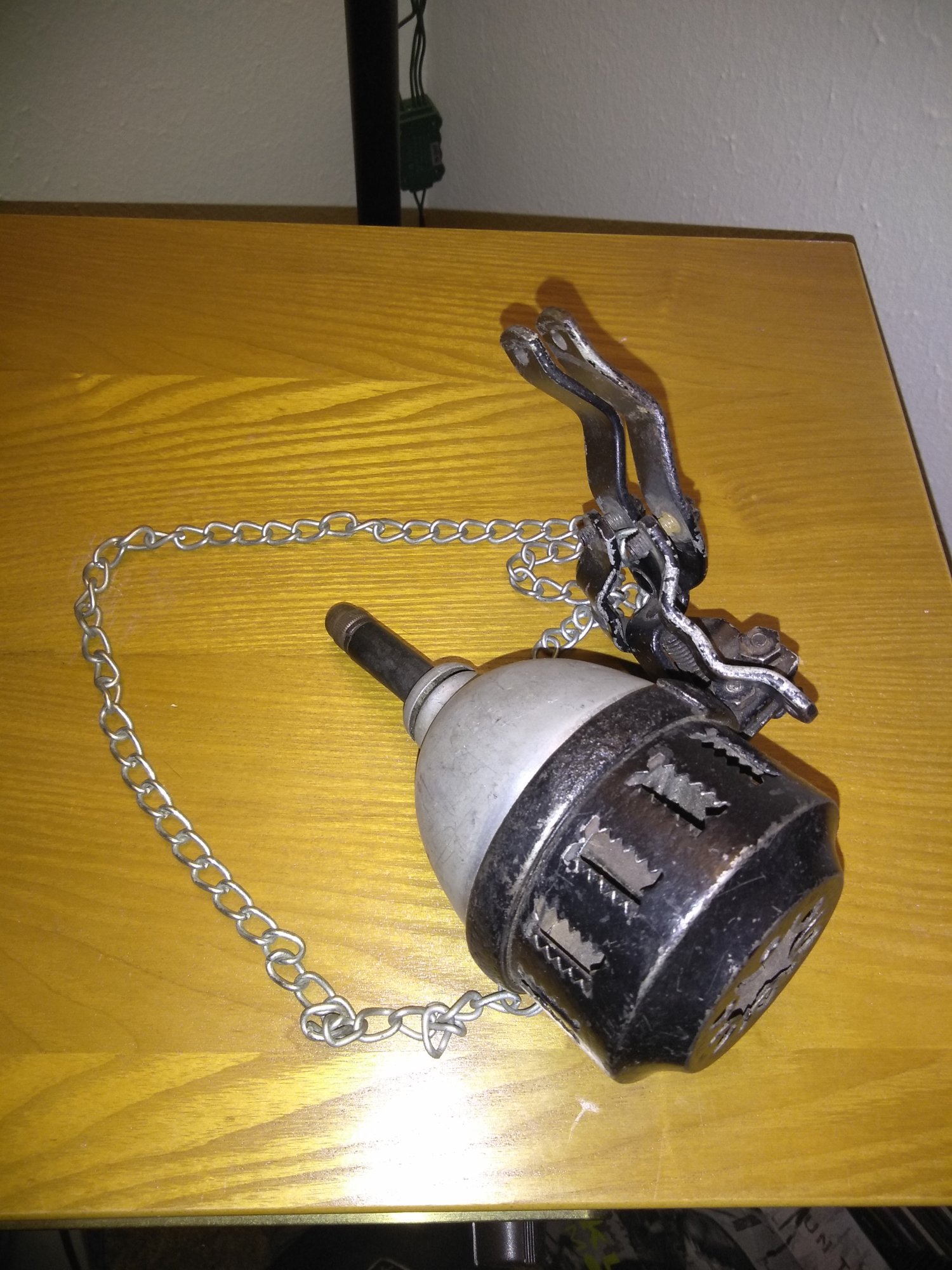 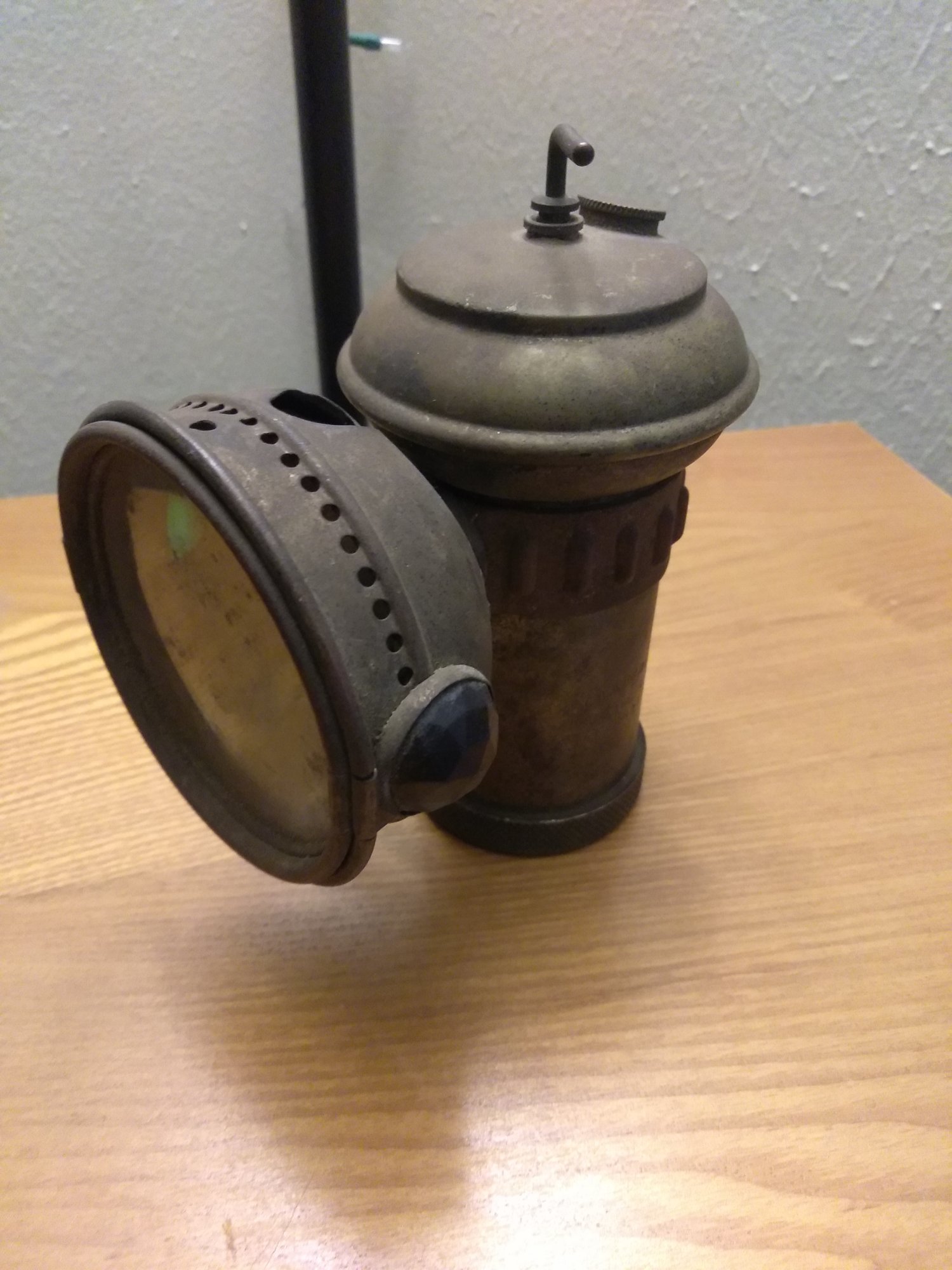 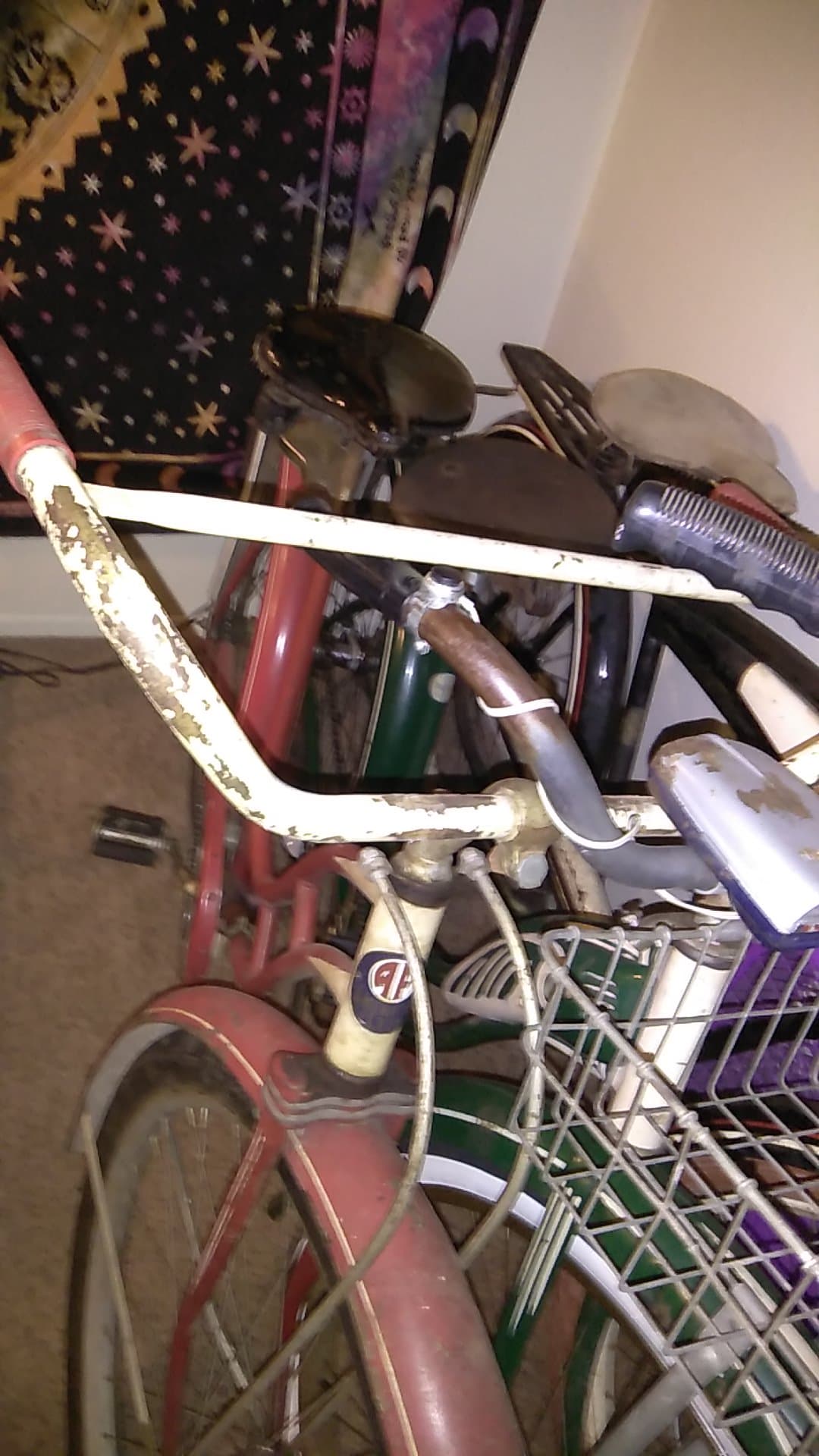 The American Flyer basically came to me as a parts bike due to really badly bent forks and some repaint. So the bars are going on the Crusader to replace it's originals that the cross brace has either rotted out from or been bent out.,
The siren I just love and the lamp being earlier, I just think is great candy for the fork leg.
The tire bell thats pictured on the Crusaders pictures at the top will likely be put on something else, and with a chain this time over a shoelace.
A

I believe Mead had some models with dazzling chromium plated forks, with matching shiny fenders like those pictured.

Archie Sturmer said:
I believe Mead had some models with dazzling chromium plated forks, with matching shiny fenders like those pictured.
Click to expand... 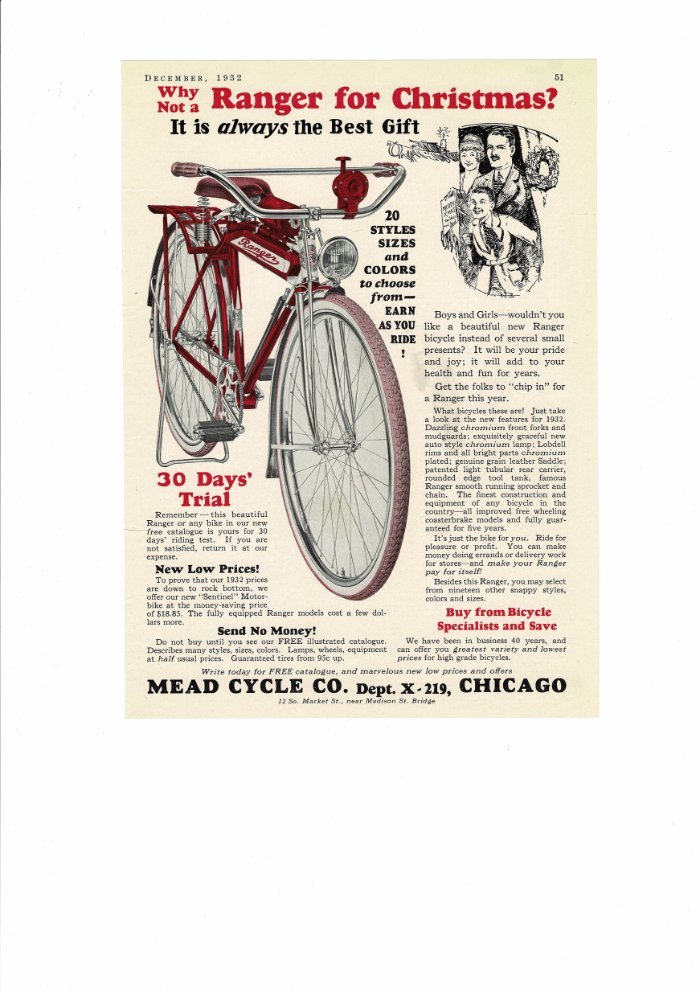 So there's suspicion the forks are chrome under a repaint?
A 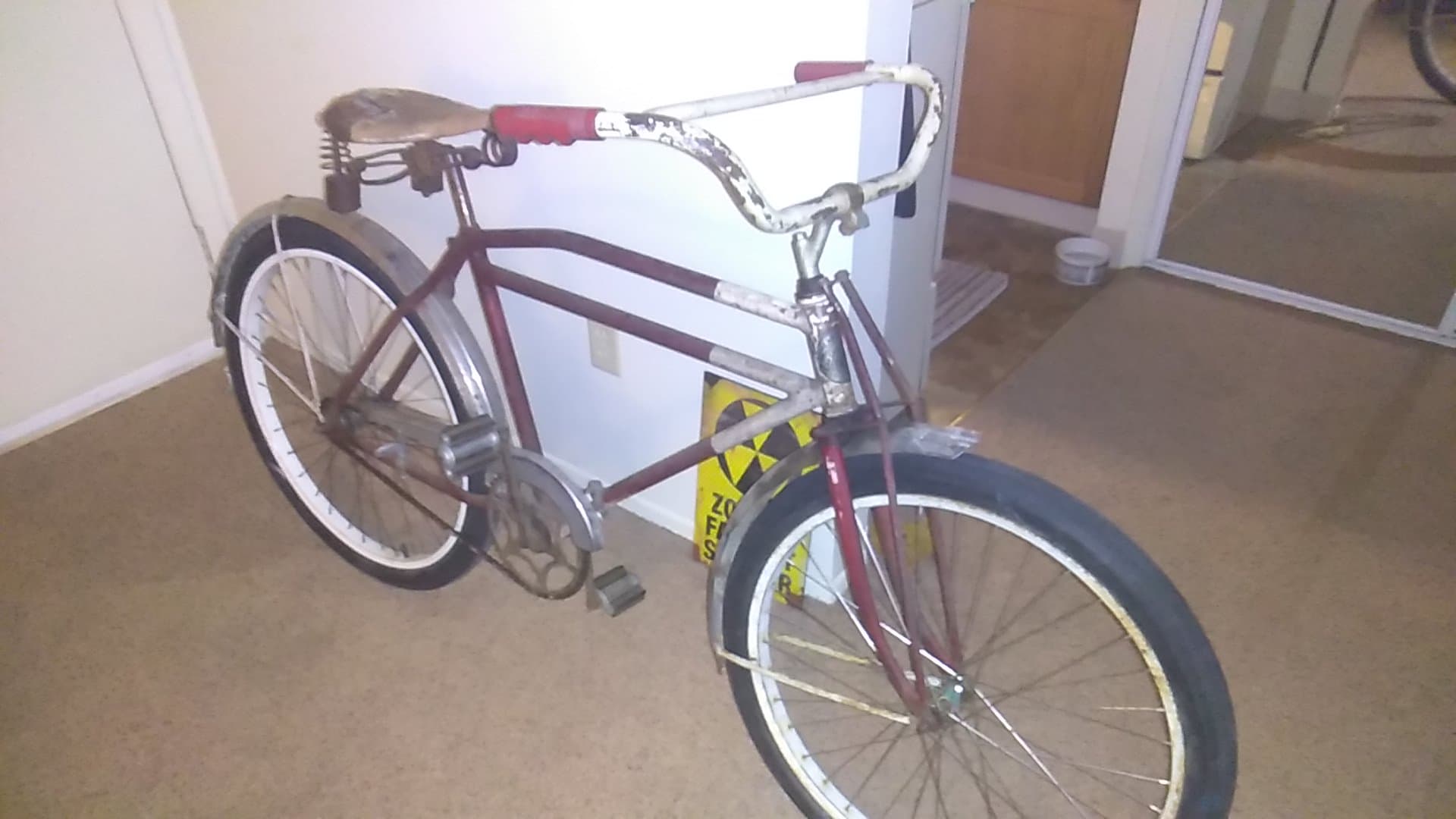 This was taken just the other night after switching bars (both because these had the crassbrace still in them where the others had the brace missing but the holes fit for one and the stem prior to this was busted in half within the head tube where the stem splits to widen after accepting the plunger style wedge when pulled up by the pin) naturally, I kept the OG bars in the event I happen on the right crassbrace inserted bar one day..

Note the striping somewhat visible on the fork. I suspect the fork may have the original paint in red with white striping where the body has been touched up as the flatcut white strikes on the frame to detail it do Not end in clean lines but rather choppy. 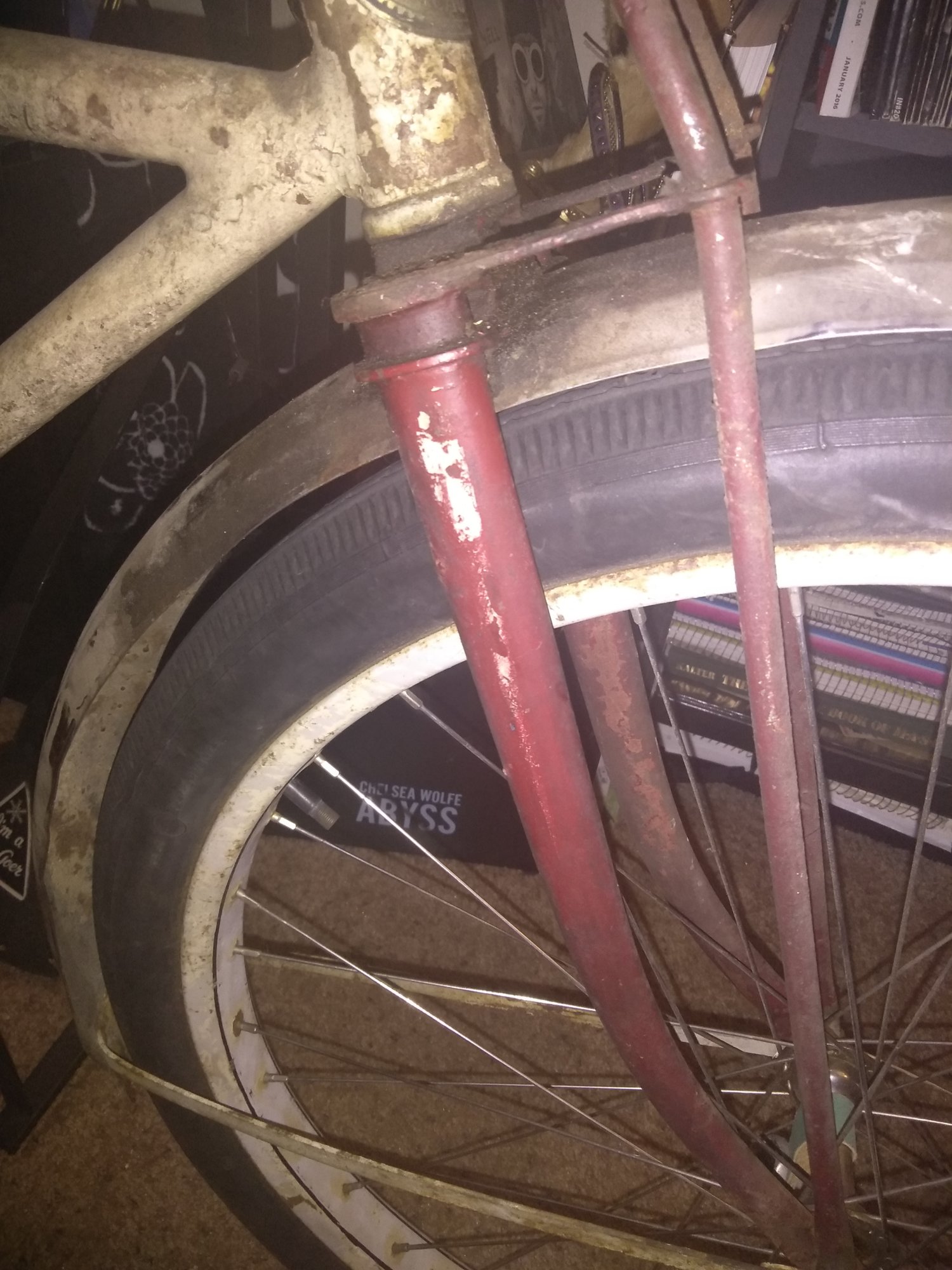 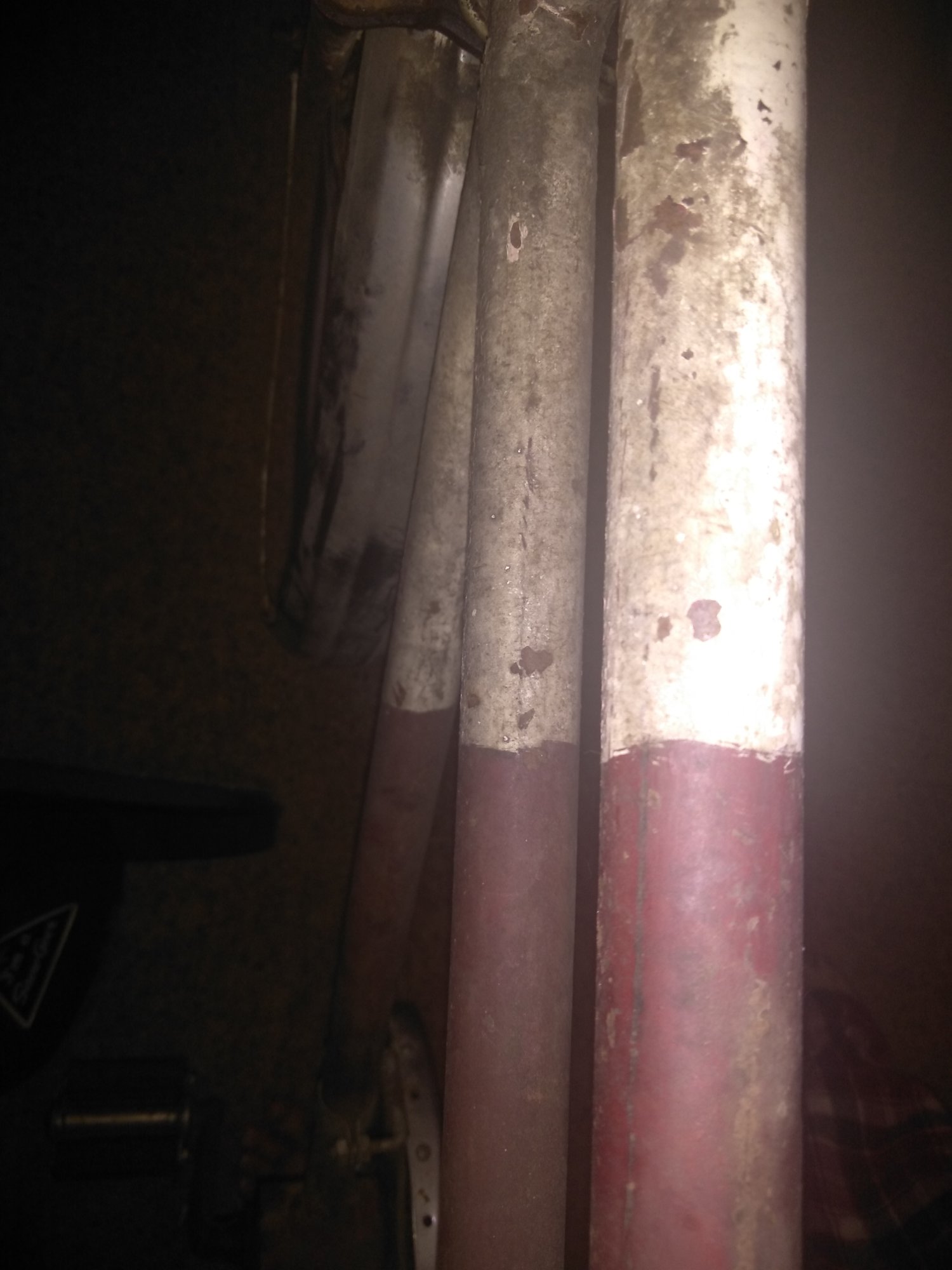 Out of curiosity, would the serial number help at ALL with make/year based in nmbers themselves or the font they're in? Maybe the number of digits or placement? 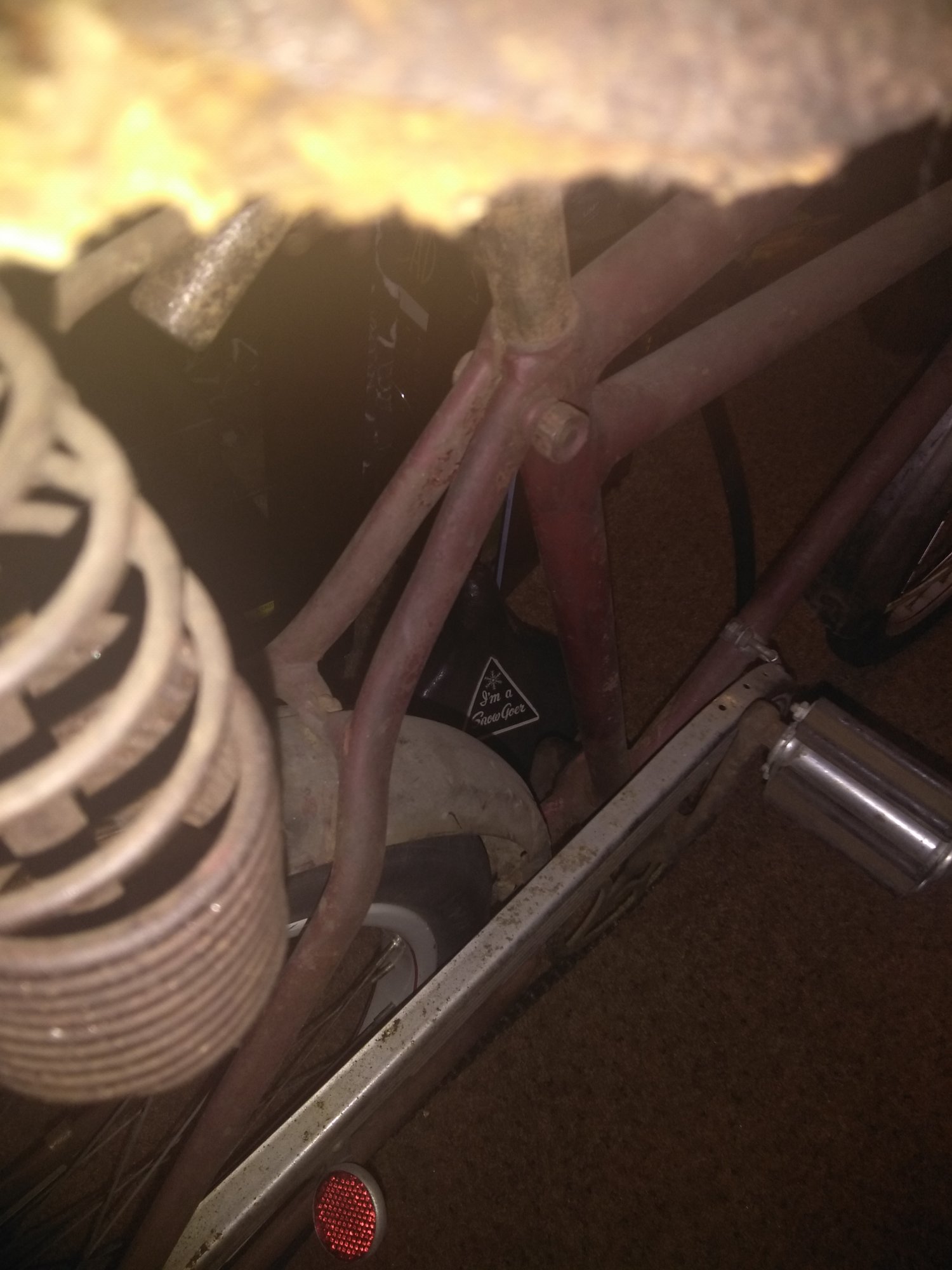 If it is a Schwinn, it may have a 6-digit serial number. Schwinn had a fire and lost their paper records.
Perhaps the community at the Schwinn forum (on the CABE site) may help re-engineer your serial number.
Some Meads may also have a smaller number stamped near the bottom bracket joint to the down tube.
You must log in or register to reply here.