The Newsboy Special, to many Columbia bicycle aficionados the model is as familiar as the back of their hand. It is no surprise that it should be since it was one of the longest running models in the company’s history.  From 1950 all the way up to 1977, an impressive 27 year run, this bike was a Columbia staple.

But what was the Newsboy Special? Simply put it was the basic, single speed heavy duty balloon tire bike in the Columbia lineup.

All Newsboys shared wheels that were 26” x 2.125” sporting “balloon” tires along with .105 heavy duty spokes. They also all had an arched top frame tube, large handlebars and a big comfortable seat. What they were lacking was all the extras of the day that were more cosmetic than anything else. The fake gas tanks also known as horn tanks in the frame were not found on this model. Neither was built in lights or sheet metal luggage racks. Only the essentials needed for a long lasting utilitarian bike were on the Newsboys.

Being one of the only balloon tire bikes made in the late 70’s it became a “test bed” for people experimenting with new ideas and new directions to take the bicycle. One direction was the removal of the fenders and chainguards, a common practice by boys of many eras. This led to the concept of the “Beach Cruiser” bike. Another direction taken, first by some bike enthusiasts on the west coast of the US was to put the heavy duty wheels from the Newsboys and mount them on lighter weight Schwinn bicycles.  This led to what is now known as the “Mountain Bike”.  Entire new classes of bicycles were emerging in the late 1970’s and many owe their inspiration to the longevity of this basic unassuming work bike.

What follows is a basic year by year guide to help in the identification of these bikes. I have divided them up into 7 groups that shared similar characteristics.

The Newsboy Specials in these years were part of the 3-Star lineup of Columbia Bicycles. They all had an arched truss bar frame. They also had fork truss rods and the half chainguards associated with the 3-Star bikes. 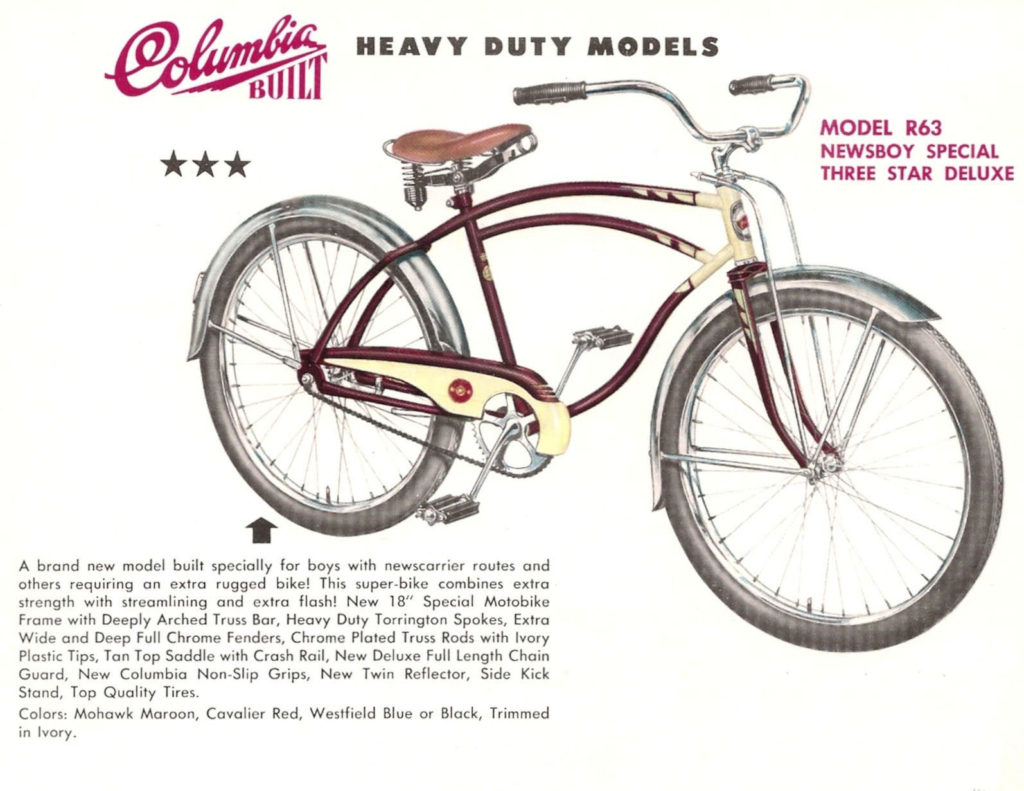 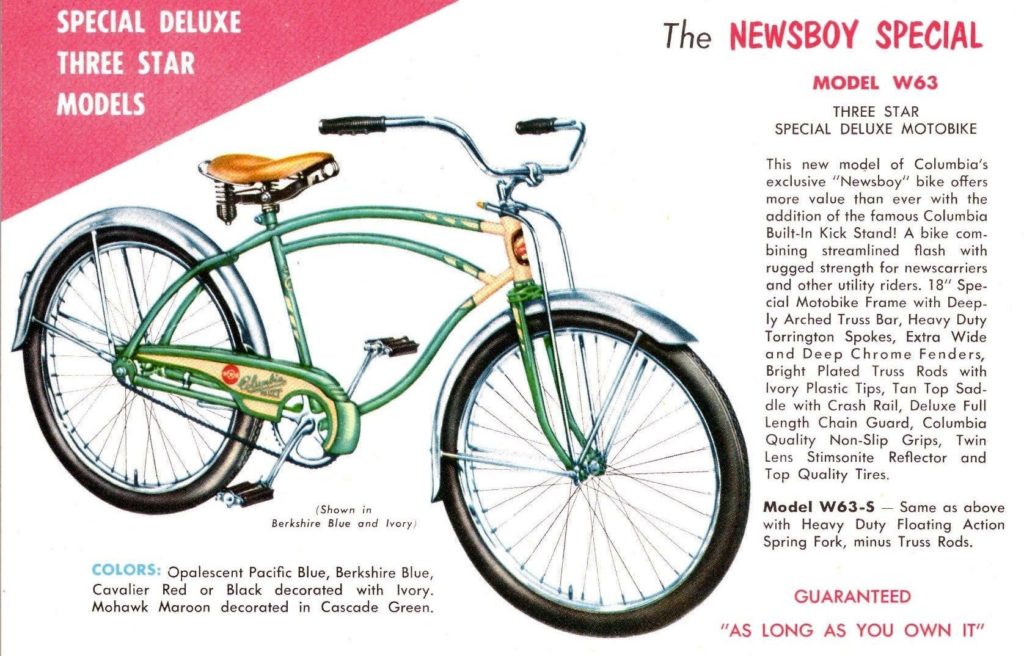 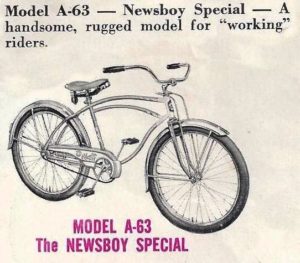 The Newsboys became 5-Stars in 1956 now sporting the full chainguards found on the other 5-Star models. Other than the guard and new hand grips they remained essentially unchanged from the first ones made in 1950. 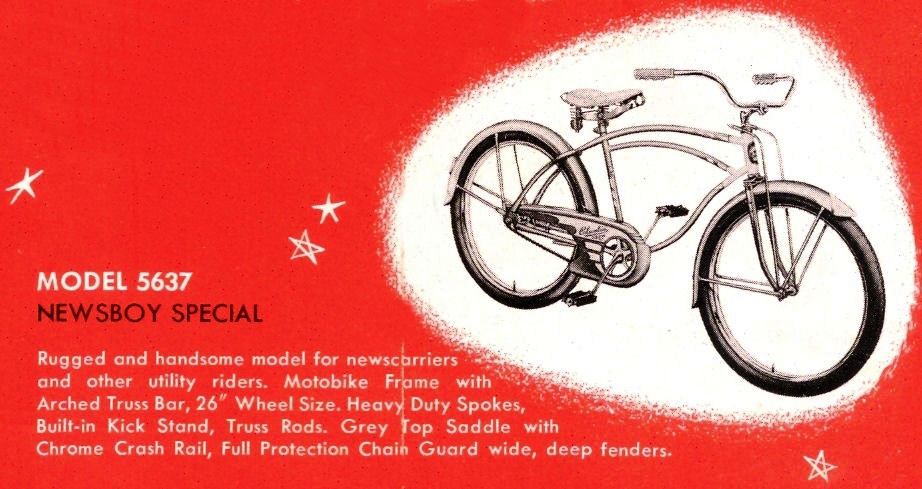 New chainguards were introduced in 1958. Other than that the newsboys continued pretty much the same though 1962. 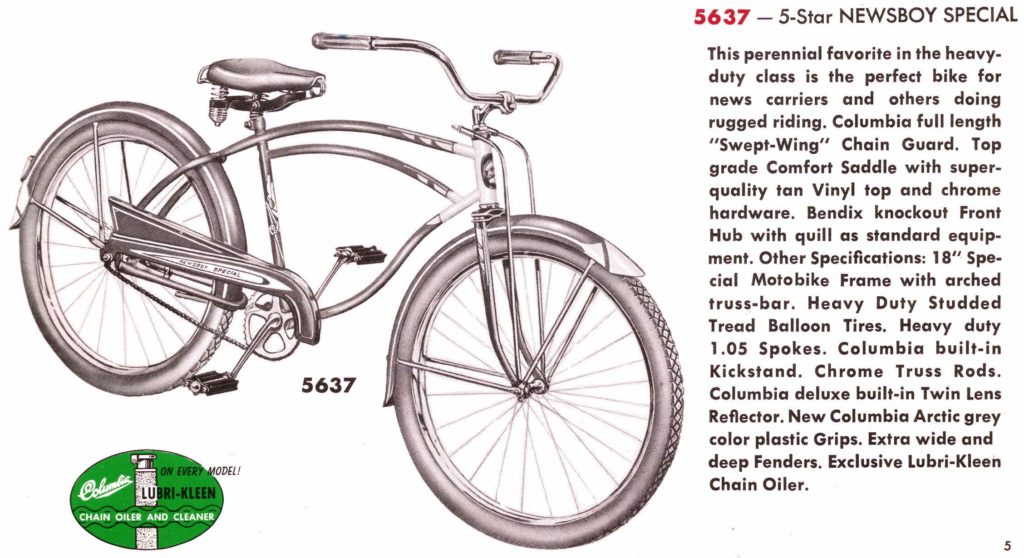 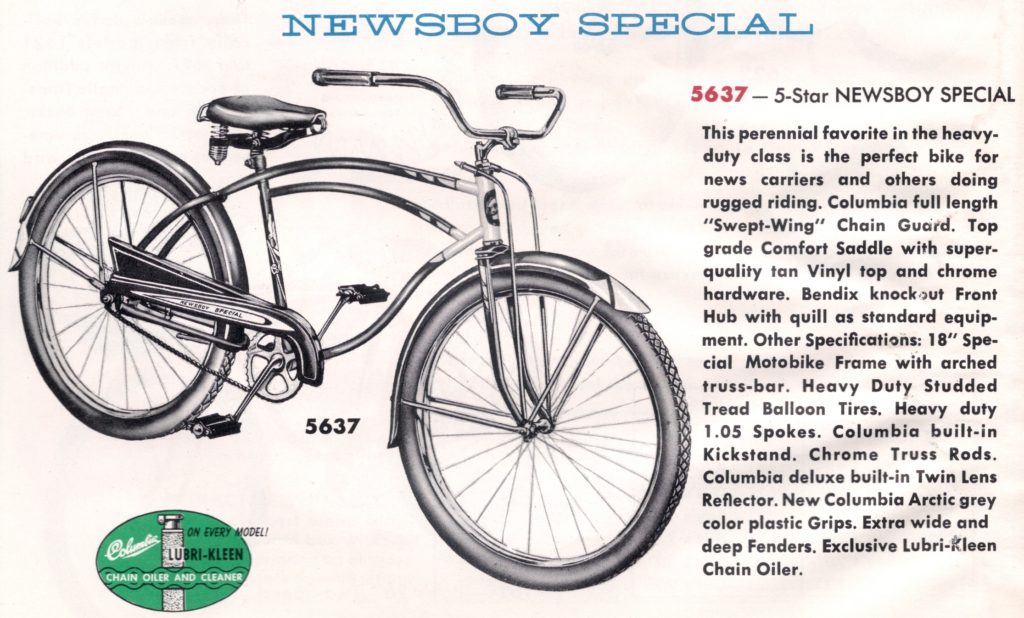 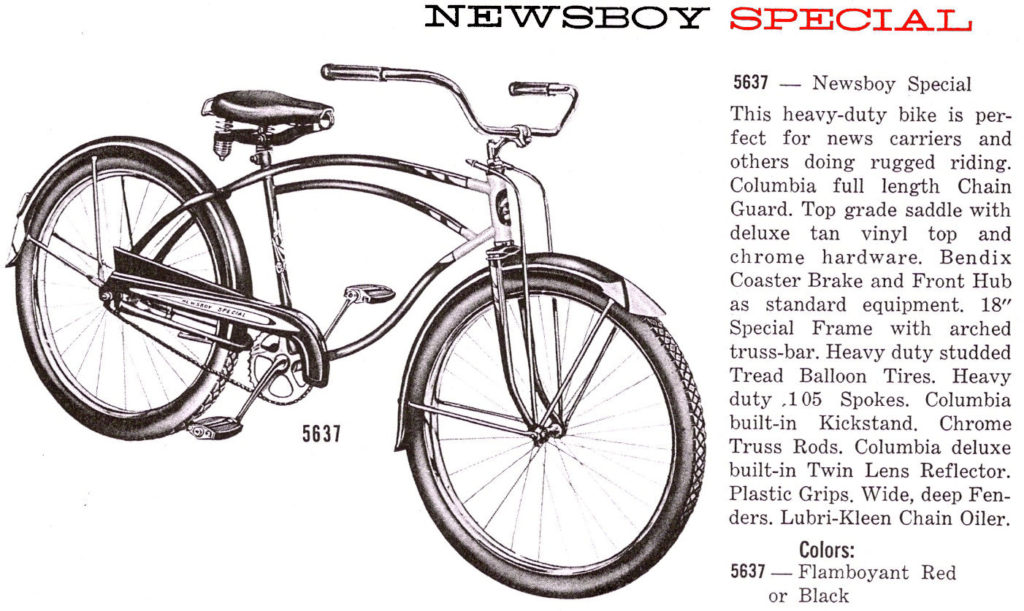 A radical new change was introduce in 1963, the unitized frame. This incorporated the center frame bars and a luggage rack as a one piece welded on unit.

The arched truss frame was re-introduced in 1965. The Newsboy Special was now back to its original basic design. It would continue to have the Columbia built in kick stand until 1967.

Similar in most respect to the 65-67 models, in 1968 the built in kickstand was now gone in favor of a bolt on one. In 1969 the fork truss rods were also eliminated. 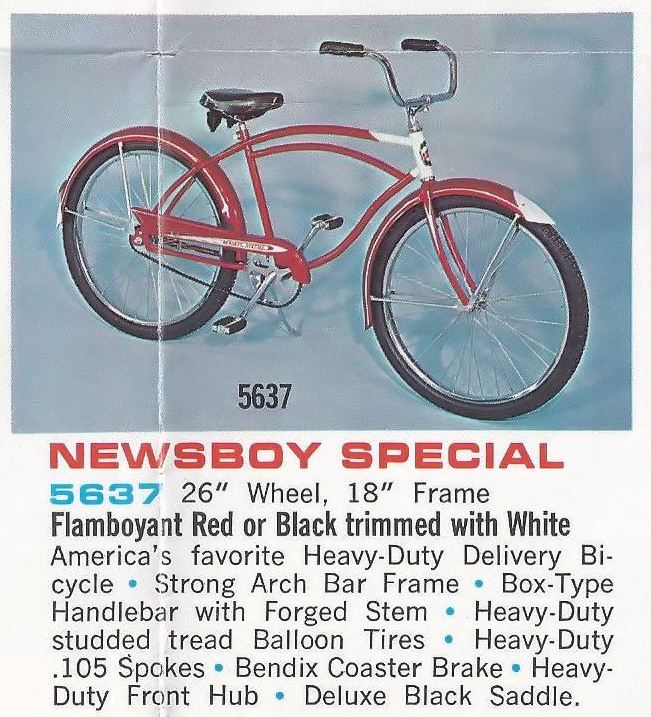 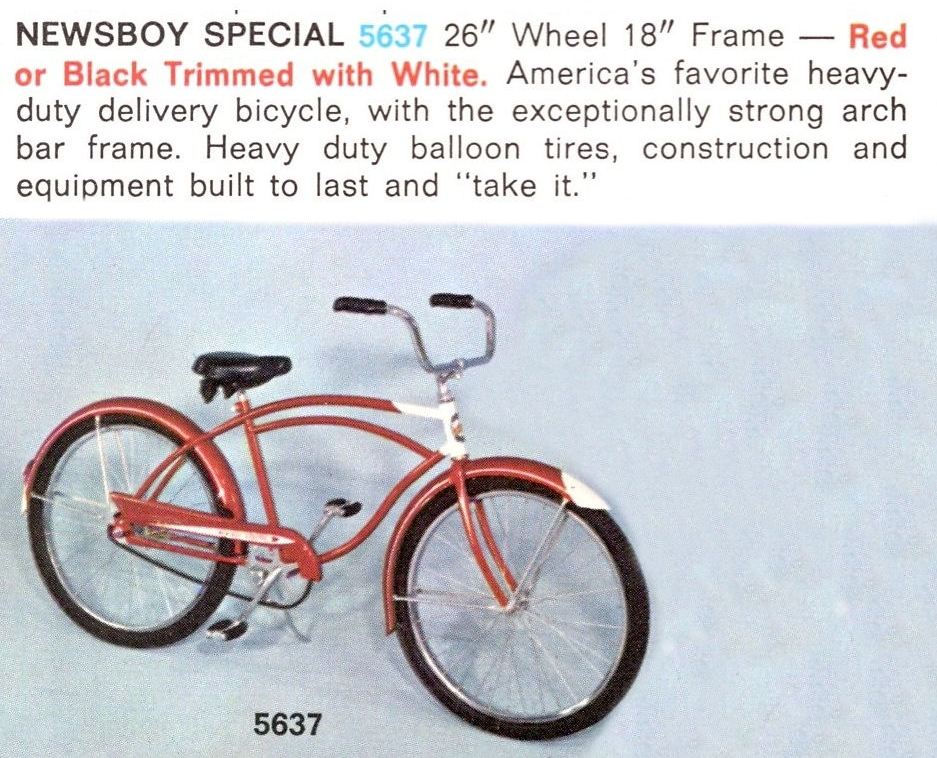 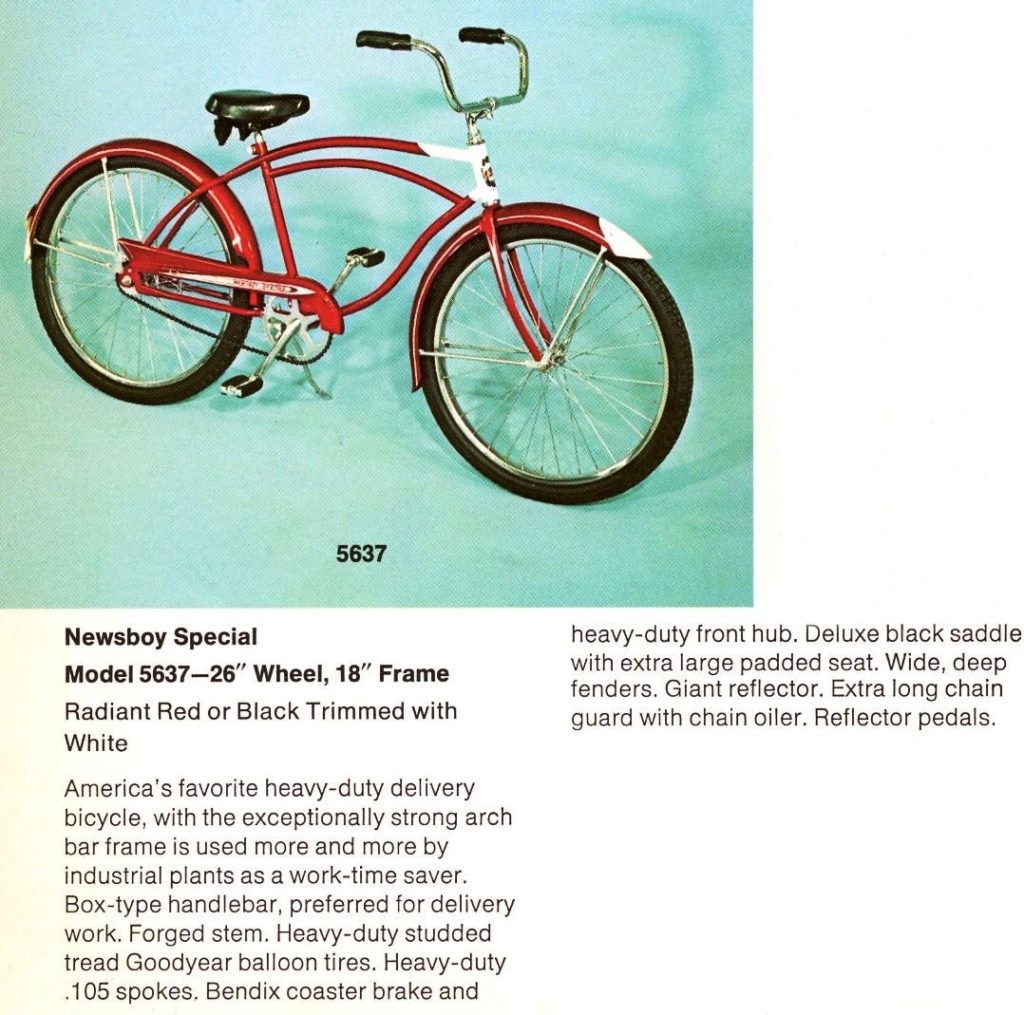 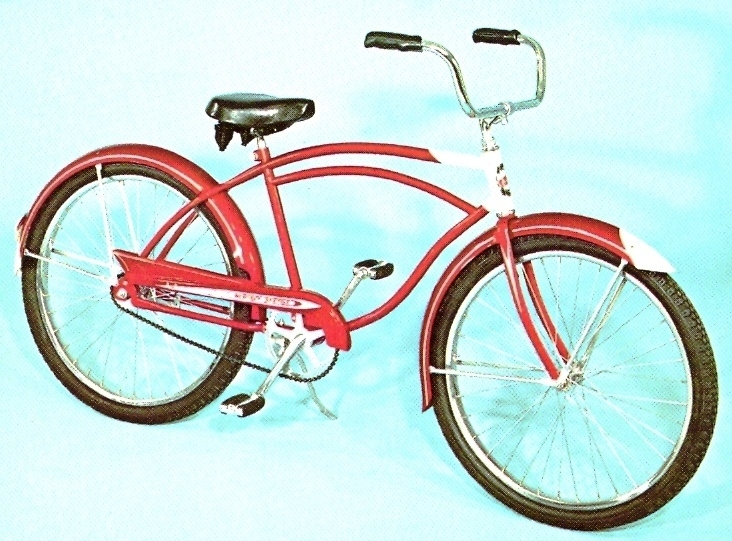 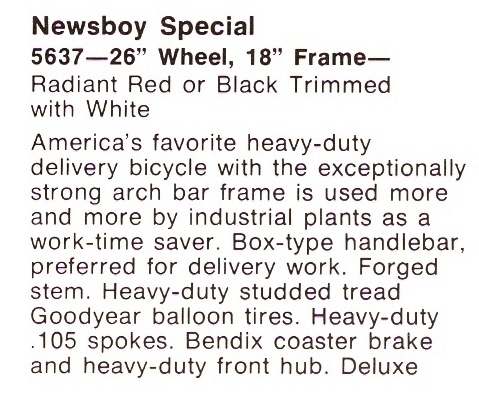 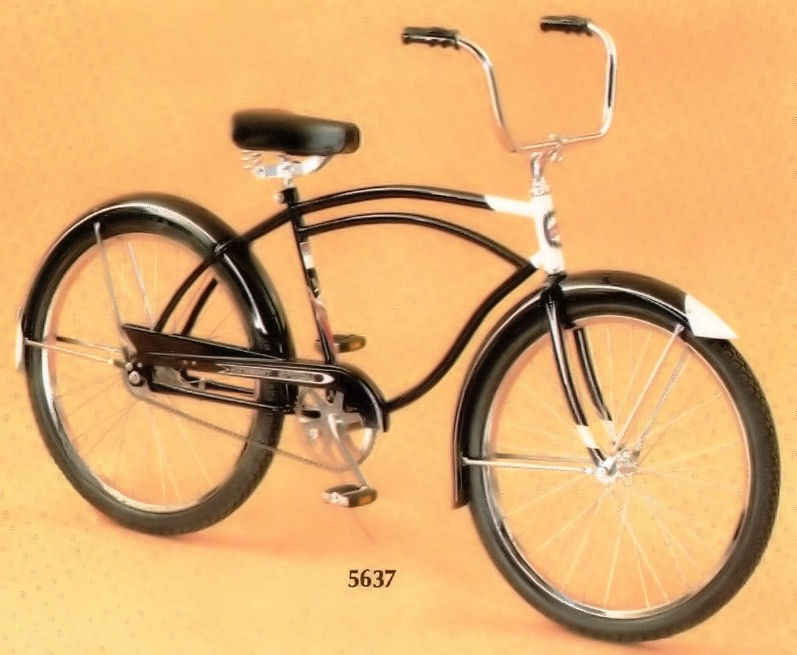 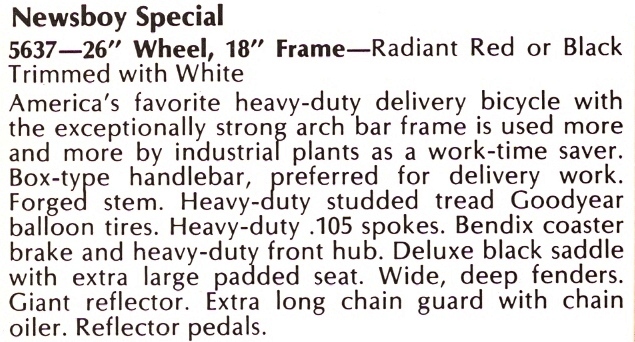 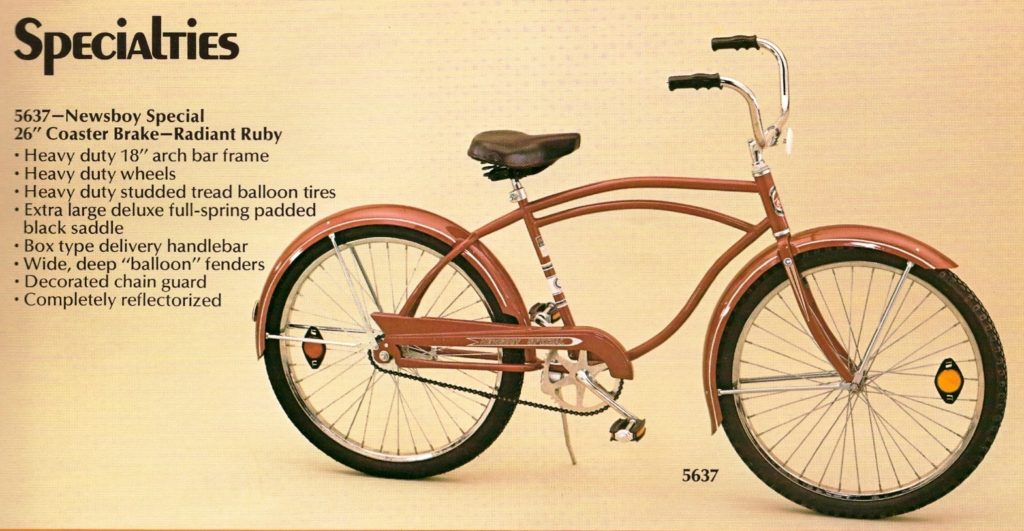 A brand new single top bar frame was introduced in 1976. This was the end of the Newsboy Special. The new frames were noticeably less heavy duty than their predecessors. This new bike would continue in 1977 – 1980 now named the “BIG MAC”. In 1981 the BIG MAC got back an arched bar truss frame and was made until 1982. 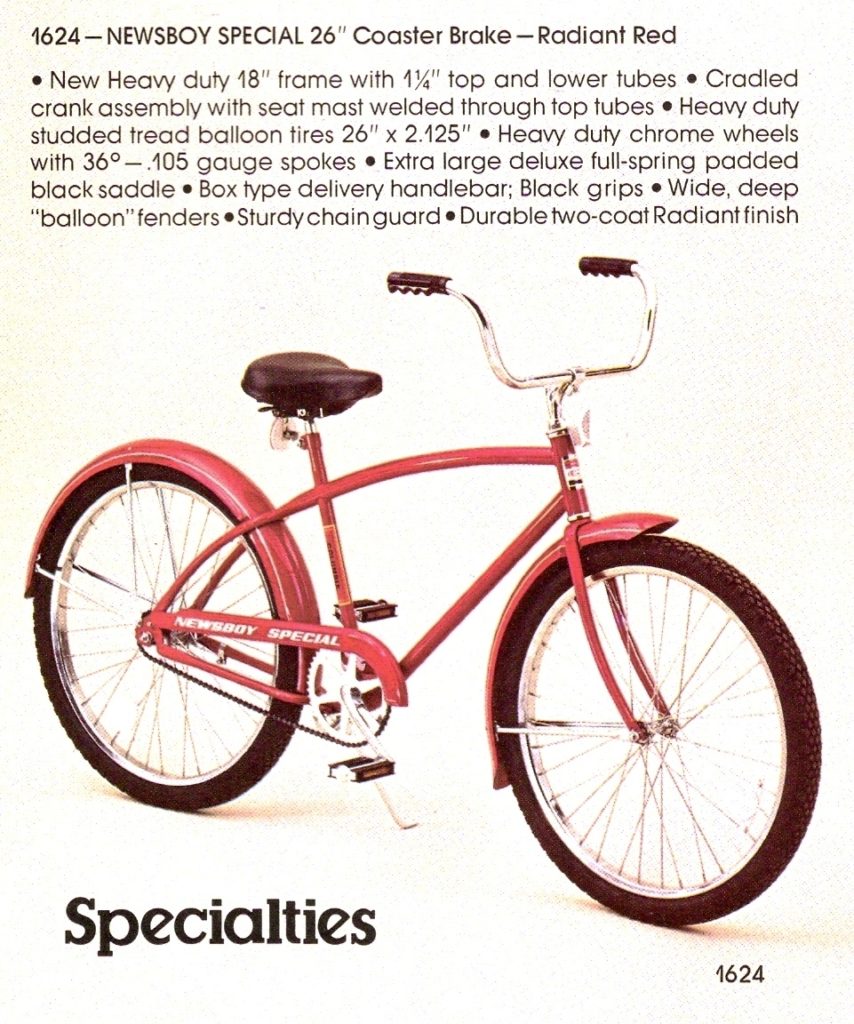 For the last 2 years of production in 1981 and 1982 the BIG MAC receives a frame closer to what the original Newsboy Special had. 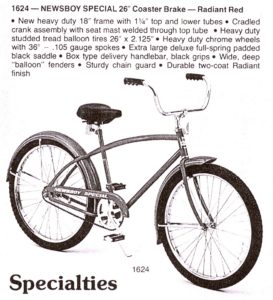 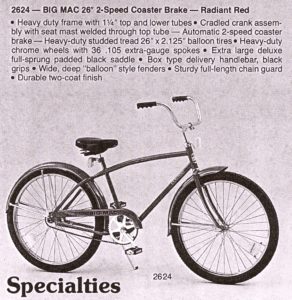 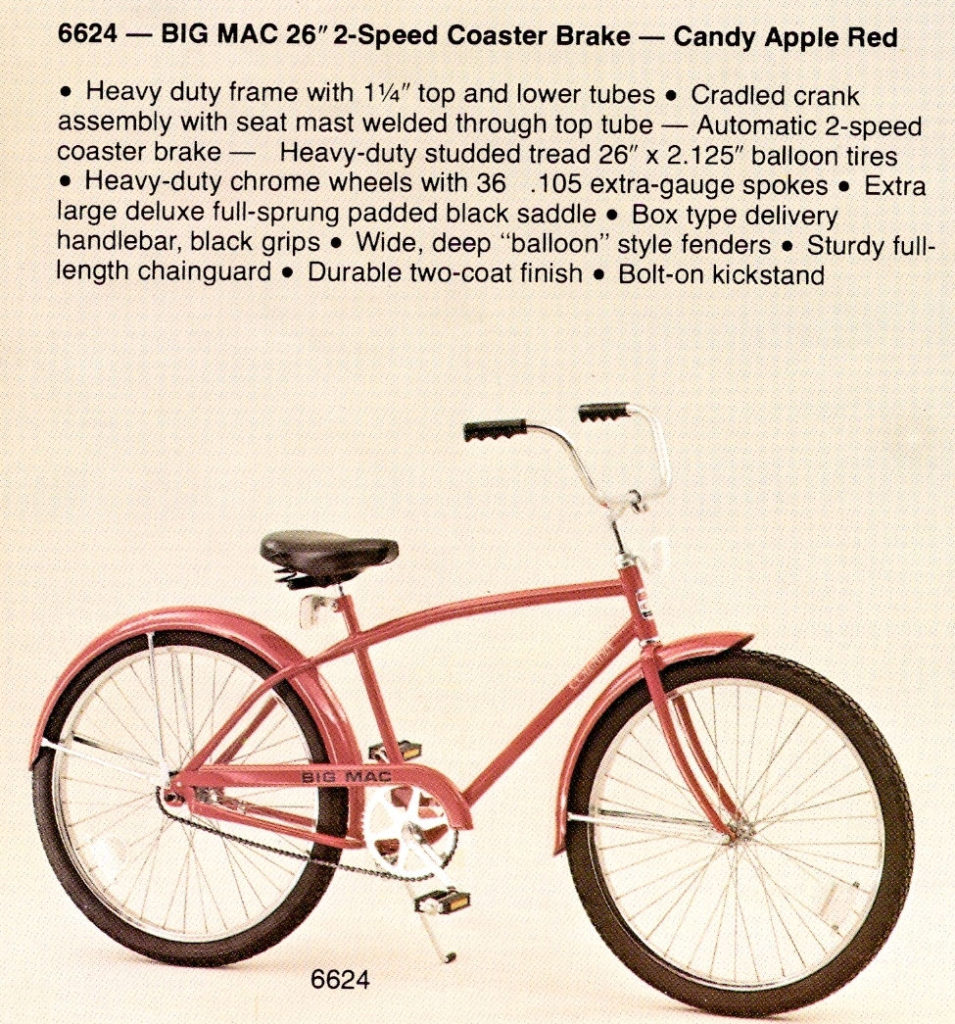