I've posted pics of this before, but finally got around to tearing it down. I have had it since I was little kid, and with the badge and chainguard missing, never knew what brand it was. Cabers identified it as a 1953 Huffy. 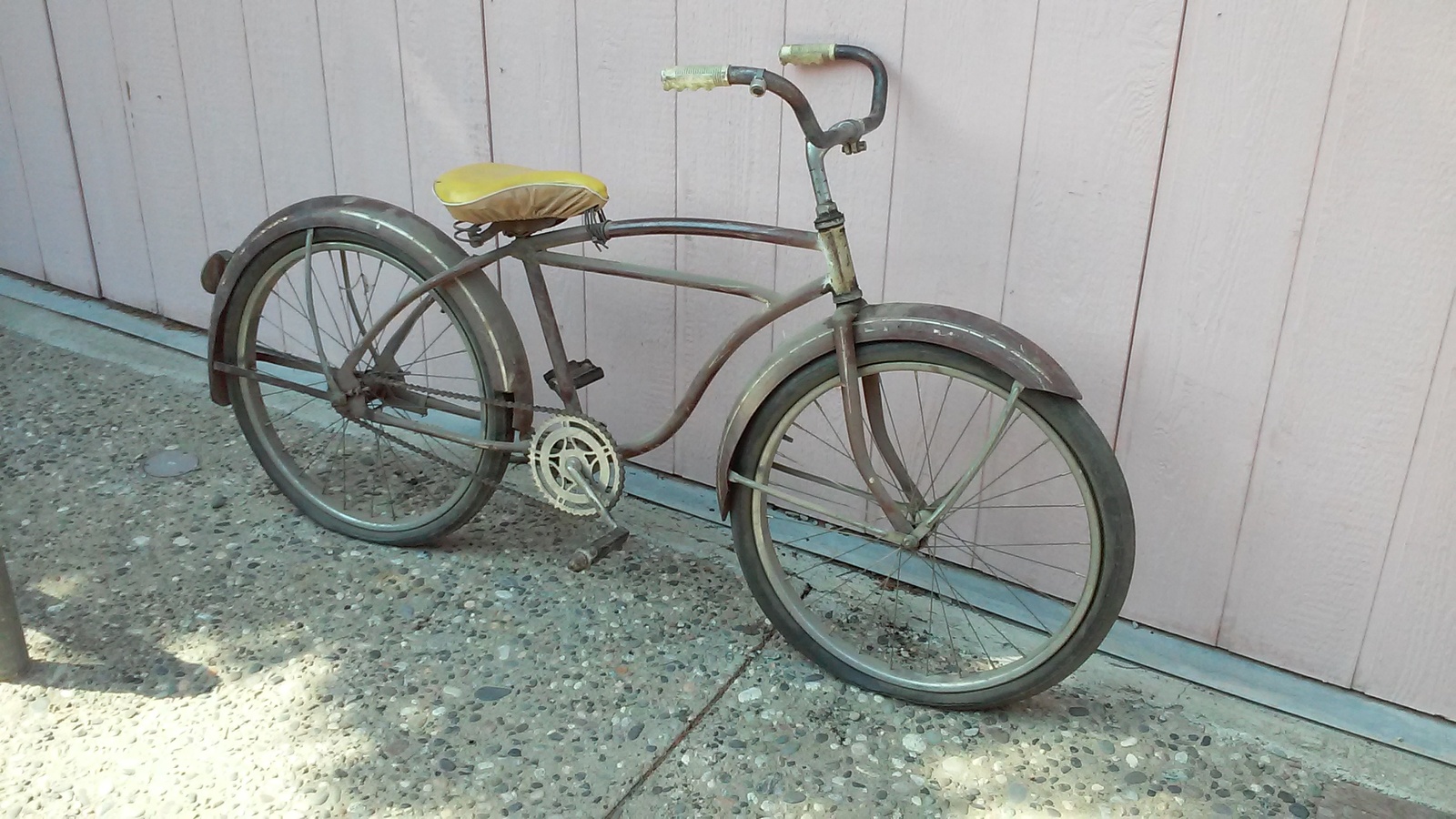 It looks like it might be a model 250, hiding in the upper right of this catalog page, posted here on the CABE from 1952. 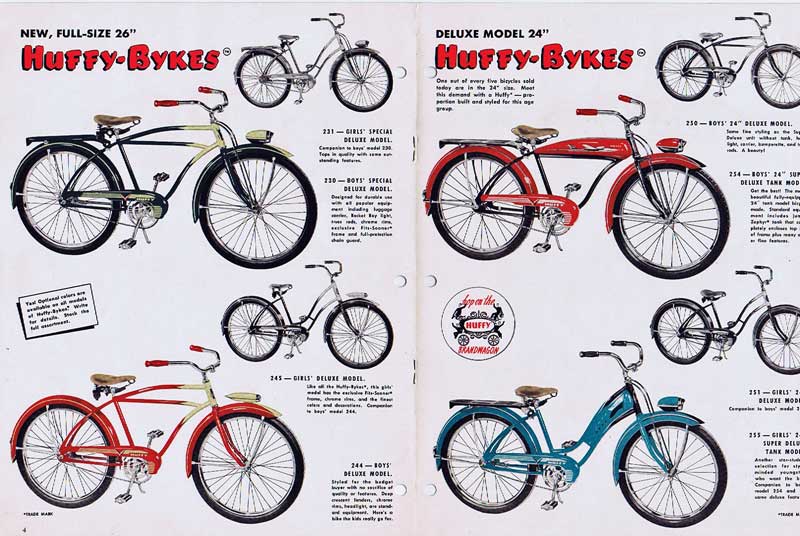 I have been collecting parts from the classifieds here and from Ebay to help with some of the things I know are screwed up. Spoiler: almost everything is screwed up. Parts have been trickling in. I tore it all down and cleaned it up. 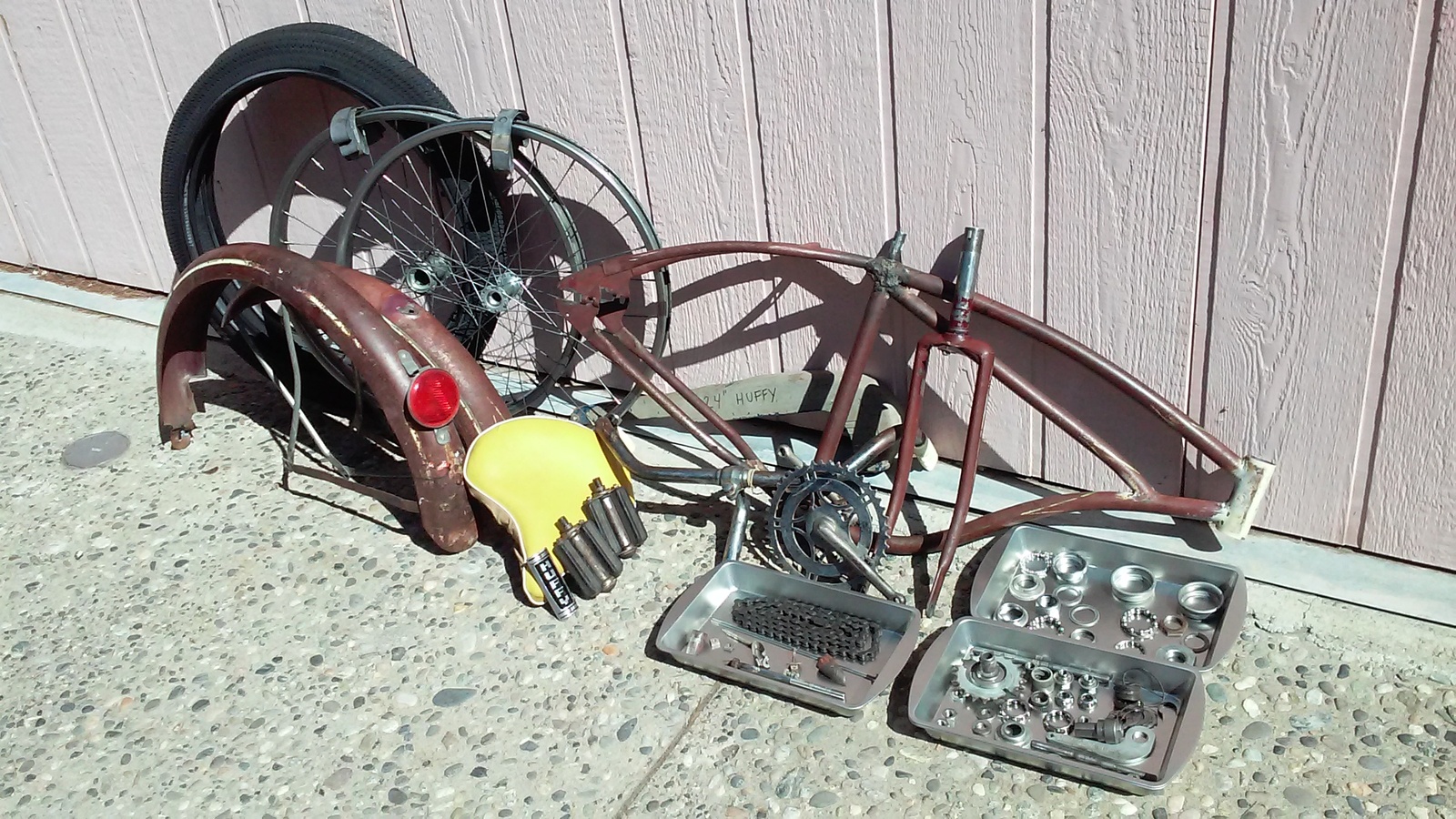 Despite it's looks it has been indoors all these years, and doesn't look a bit different than it did in 1970. Then I assumed it was all rust. A lot of it is, but there is some brown paint too.... Well, I guess Mead did that as well.

Here is one sold by @kirk thomas back in 2016, probably a year older and in much better shape. 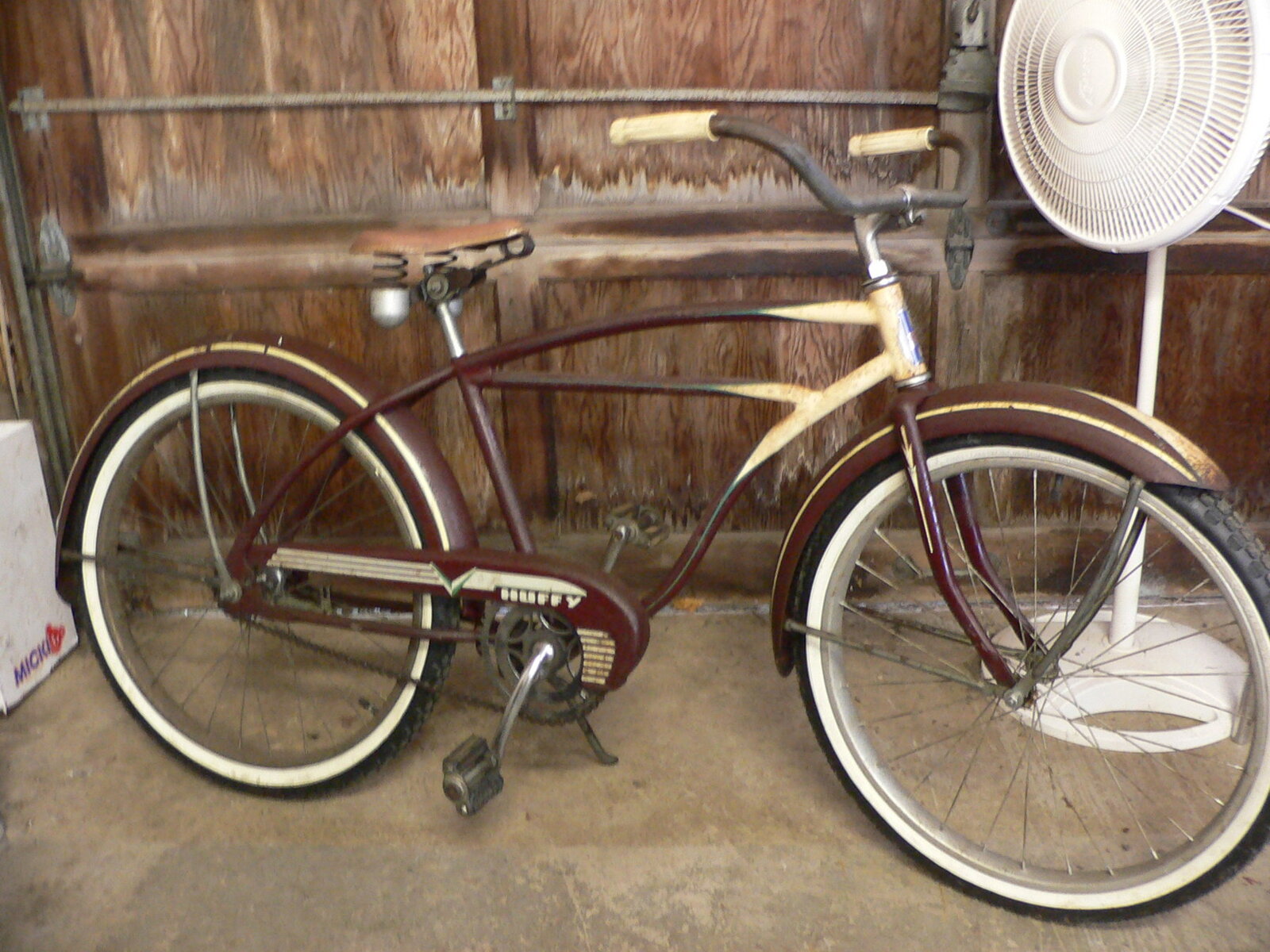 Oh look.... it used to be maroon. I had no idea. That must have been really nice looking when it was new, maroon with cream darts and green pins. 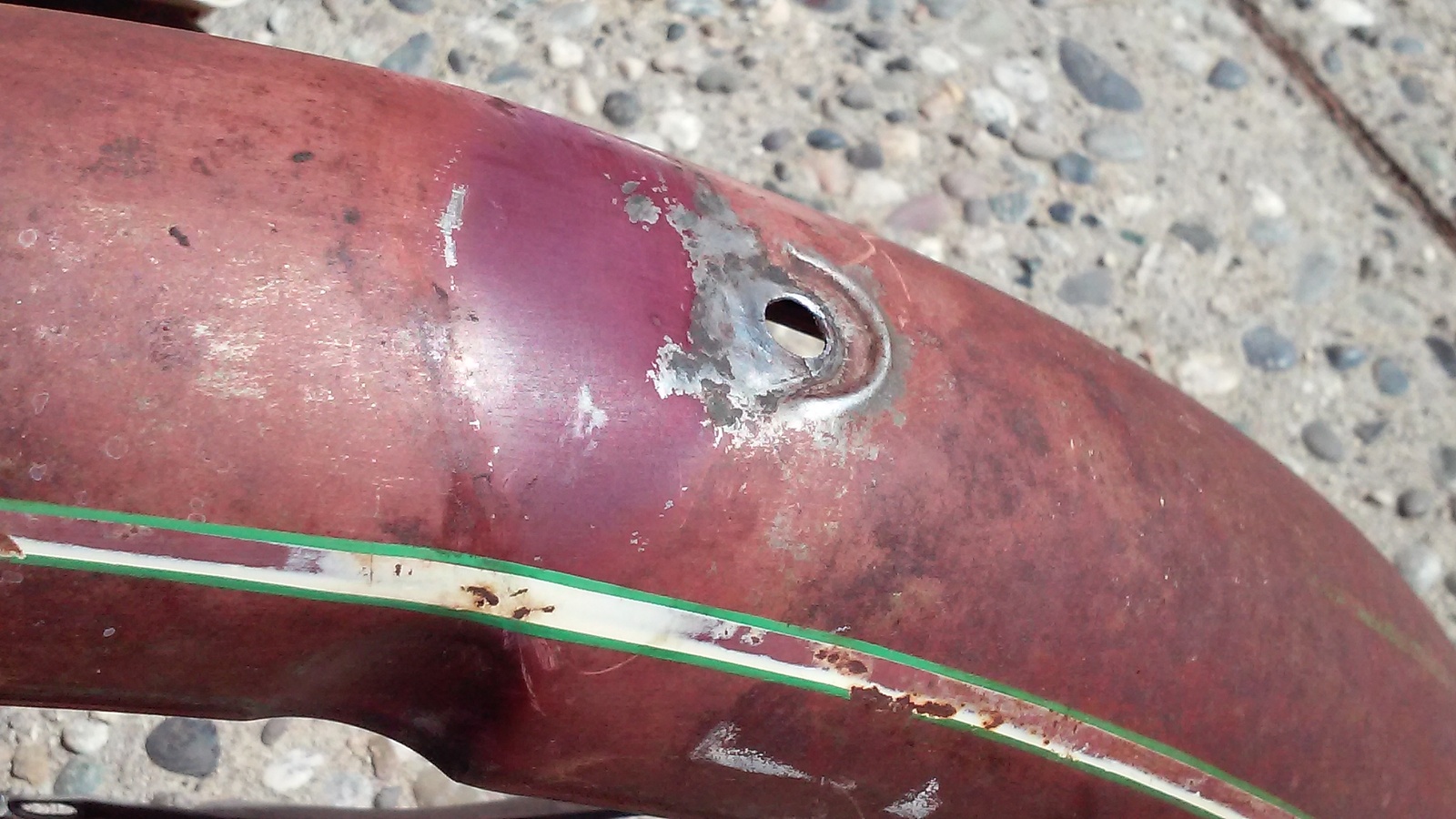 Got the rims cleaned up, replaced the broken spokes and trued them, overhauled the hubs and got some new tires. They came out great, except the New Departure rear hub. It still seems to have problems, but I'll address that later. New tires are mounted. I think this is Korean war chrome. If so, there's a clear coat on it. They look about like they did in the 70s... dull silver. 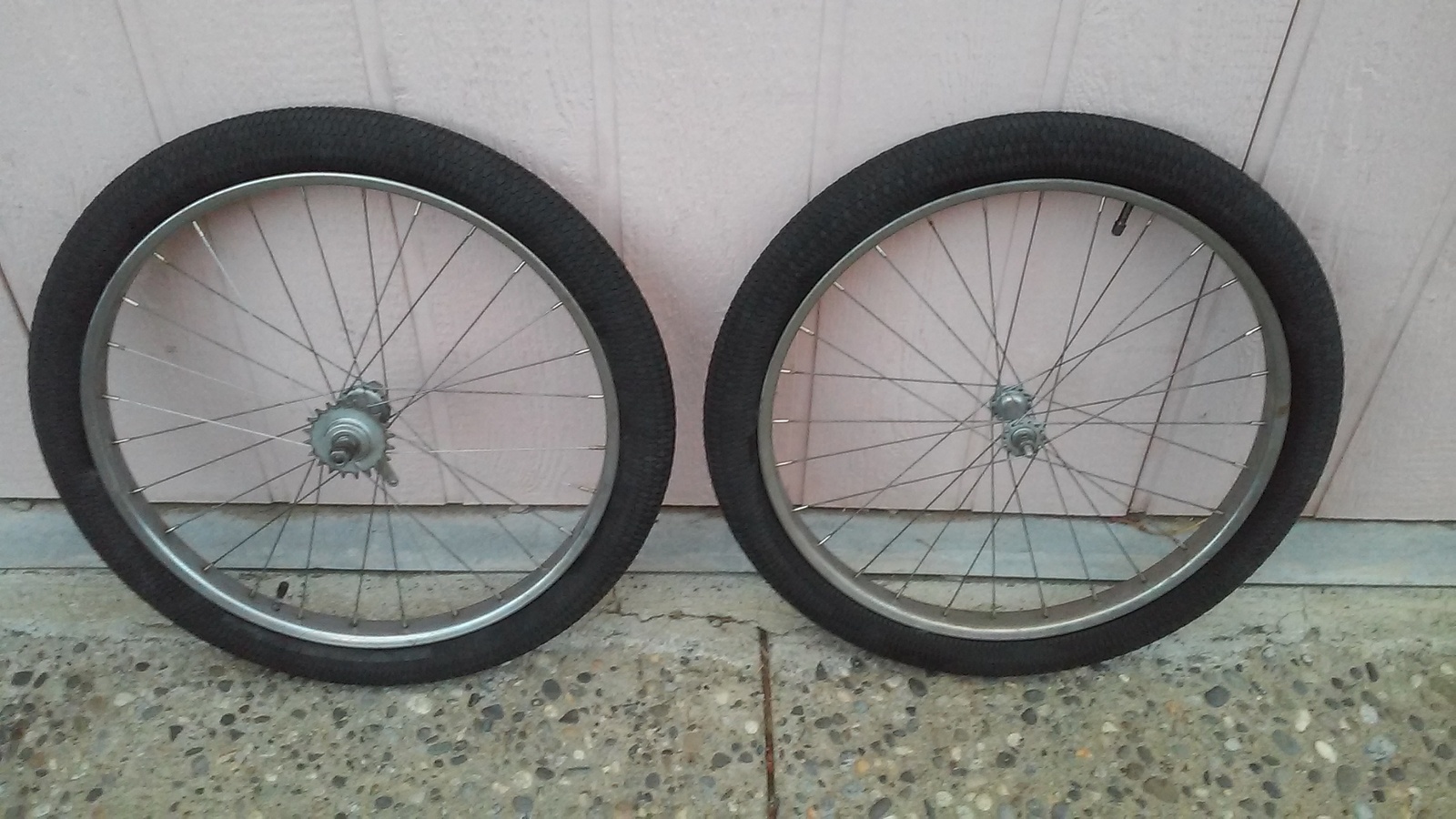 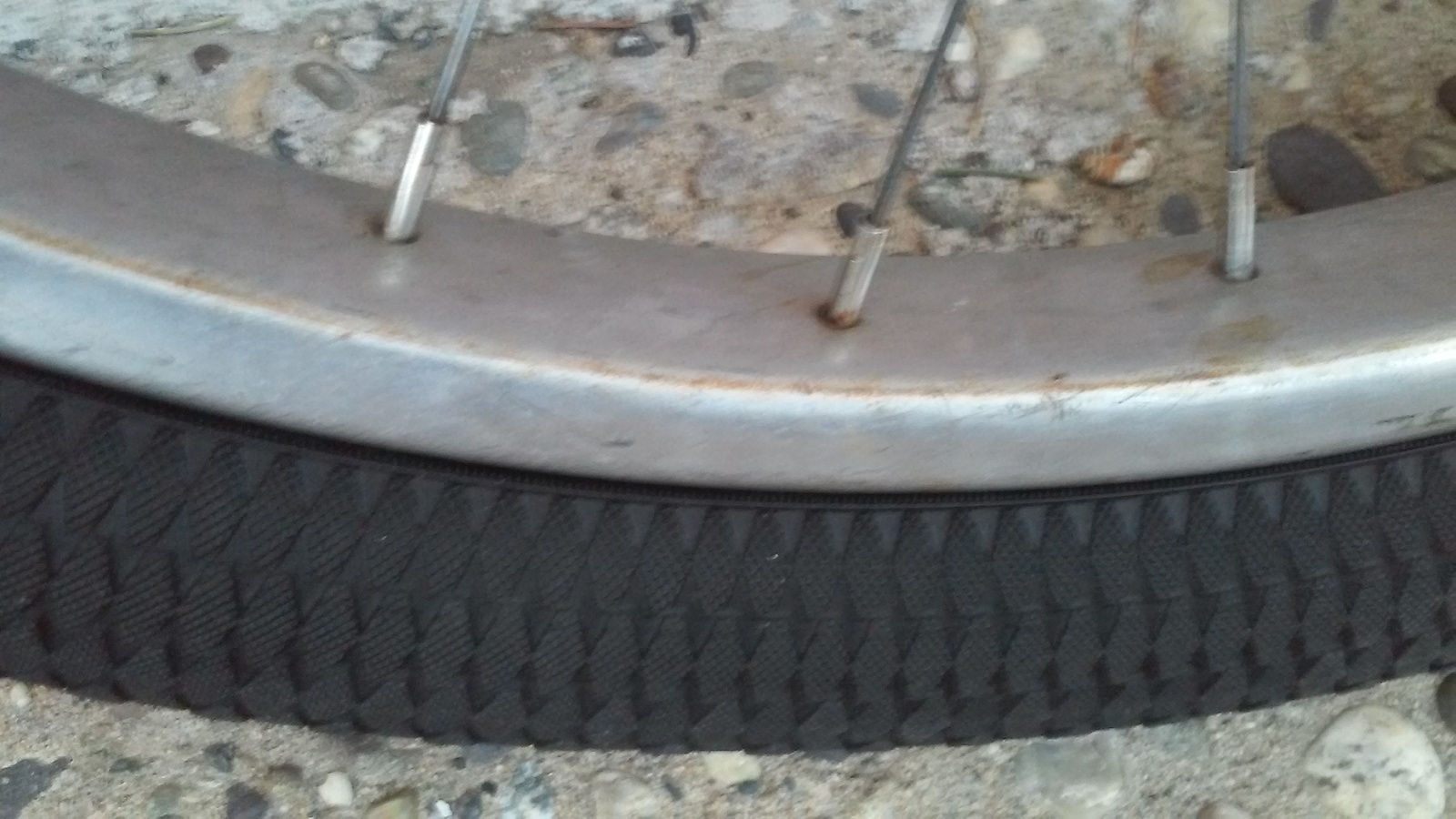 The rear fender did not want to come off. Someone had re-brazed the chainstay bridge, didn't even get it straight, and brazed the tail of the fender on. I had to melt that off, and since it was split, repair the tip of the fender. I mean... Seriously? 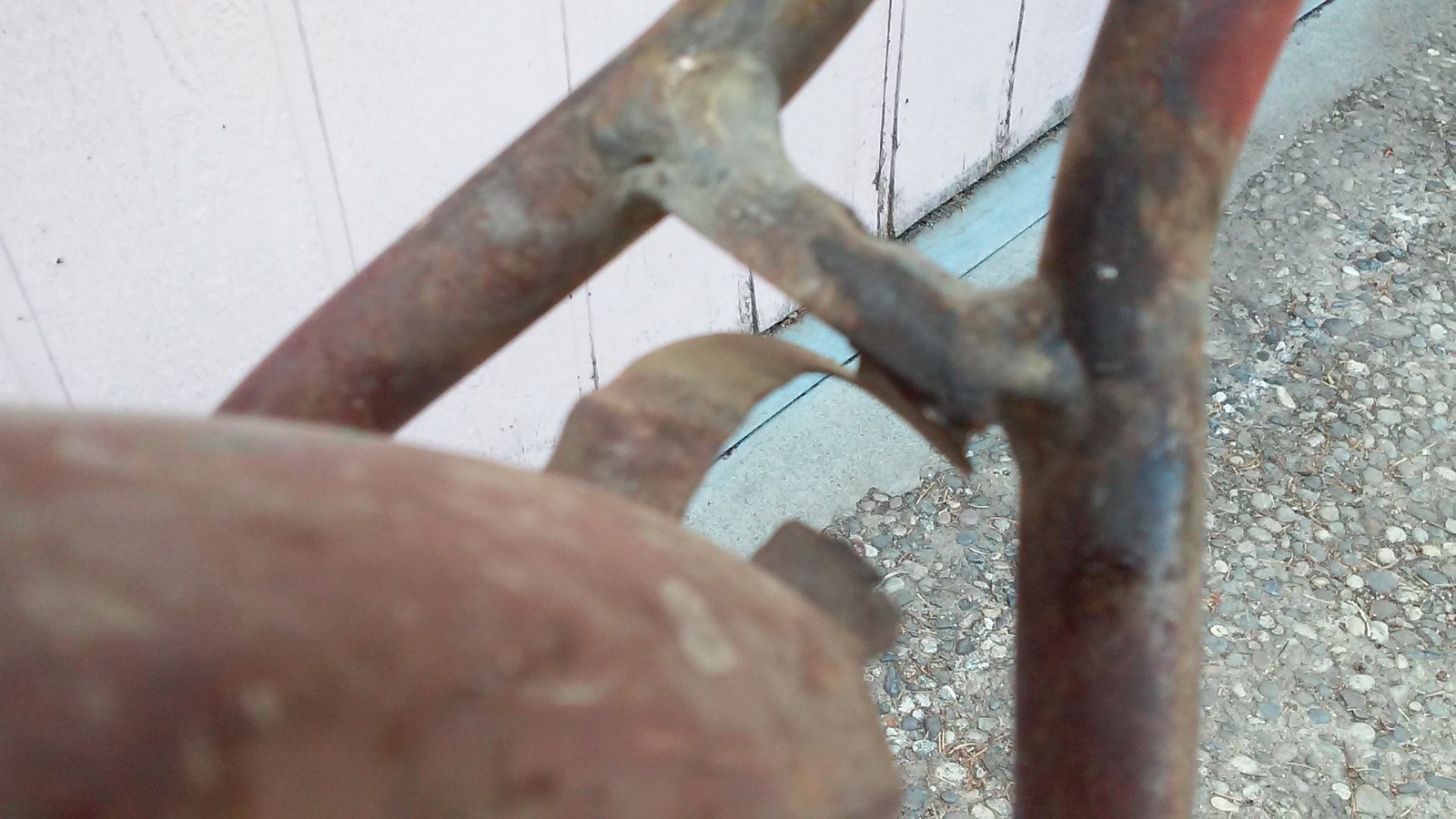 It was covered in brass, so I just used some more brass. 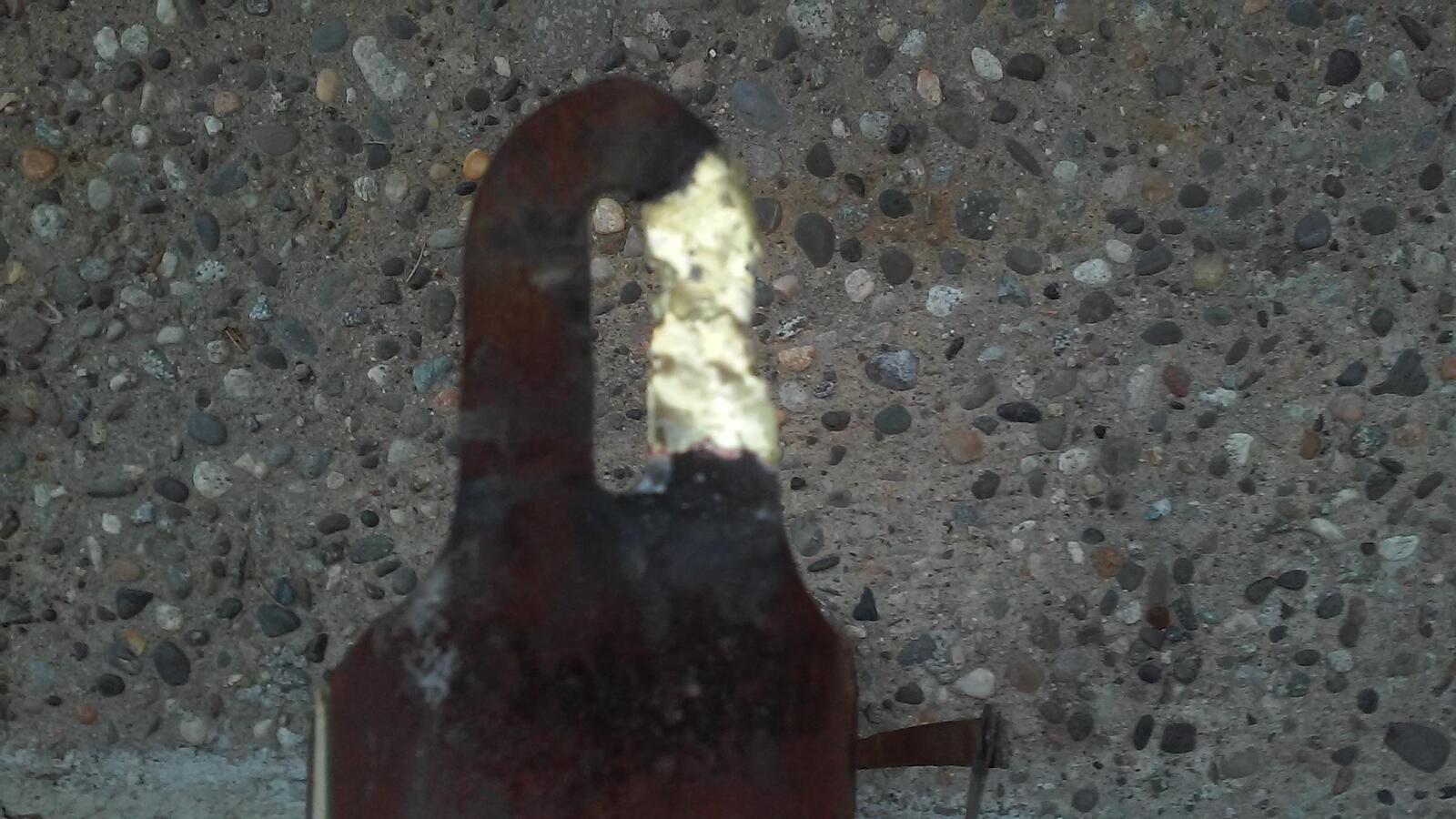 There are a lot of really bad braze repairs on this bike, some of the worst of which are on the frame. More on that later. Next the fenders needed straightening, and since the stays on the back fender were brazed on (yes, really), I didn't think I could get enough of it off to have them rolled. 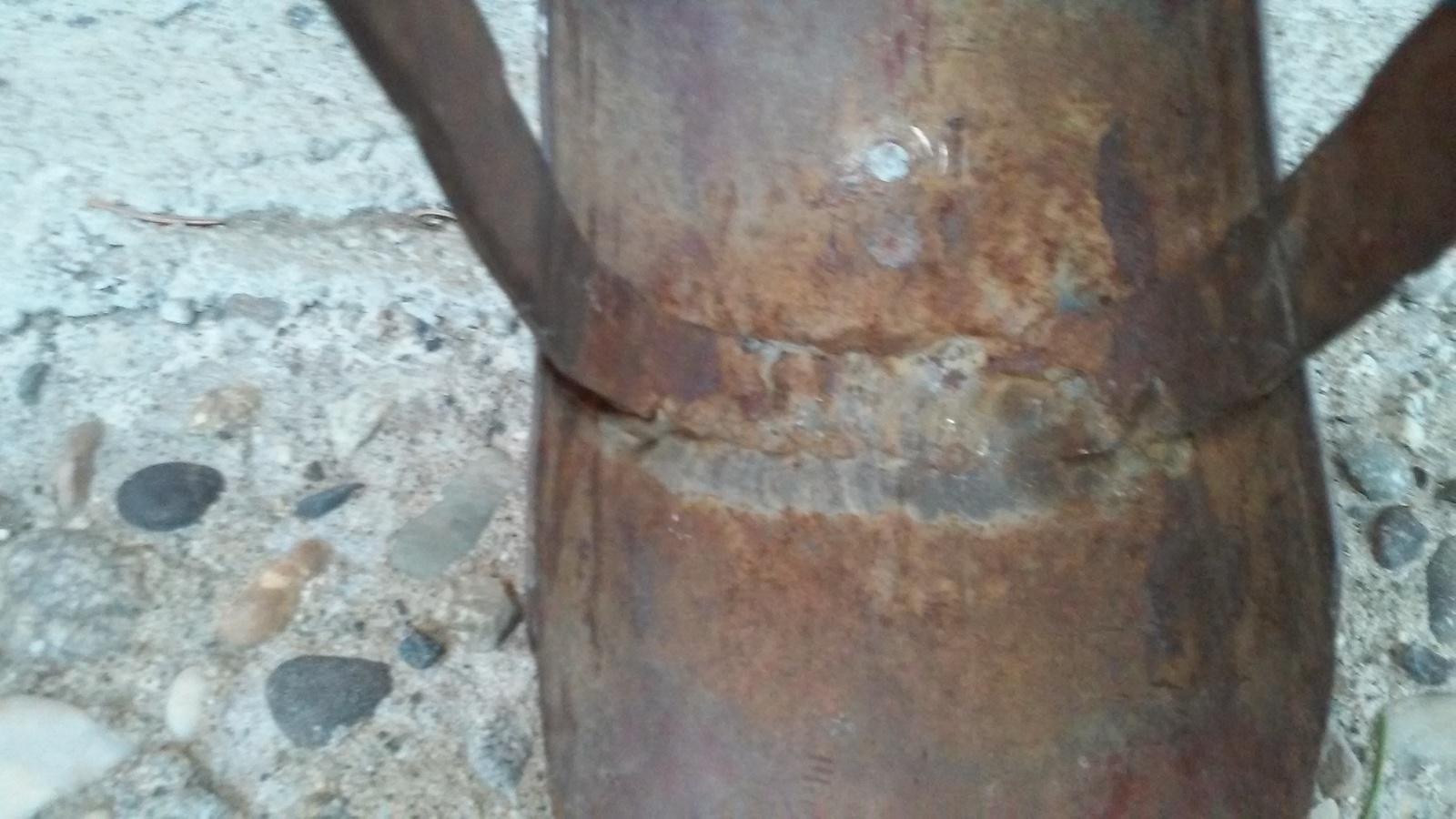 The lower one isn't even a fender stay... It is just some random piece of metal. I worked them over with a hammer and dolly. They looked really wide, but as it turns out they are about normal width but really really deep. In retrospect, I don't know if rolling would have worked anyway. 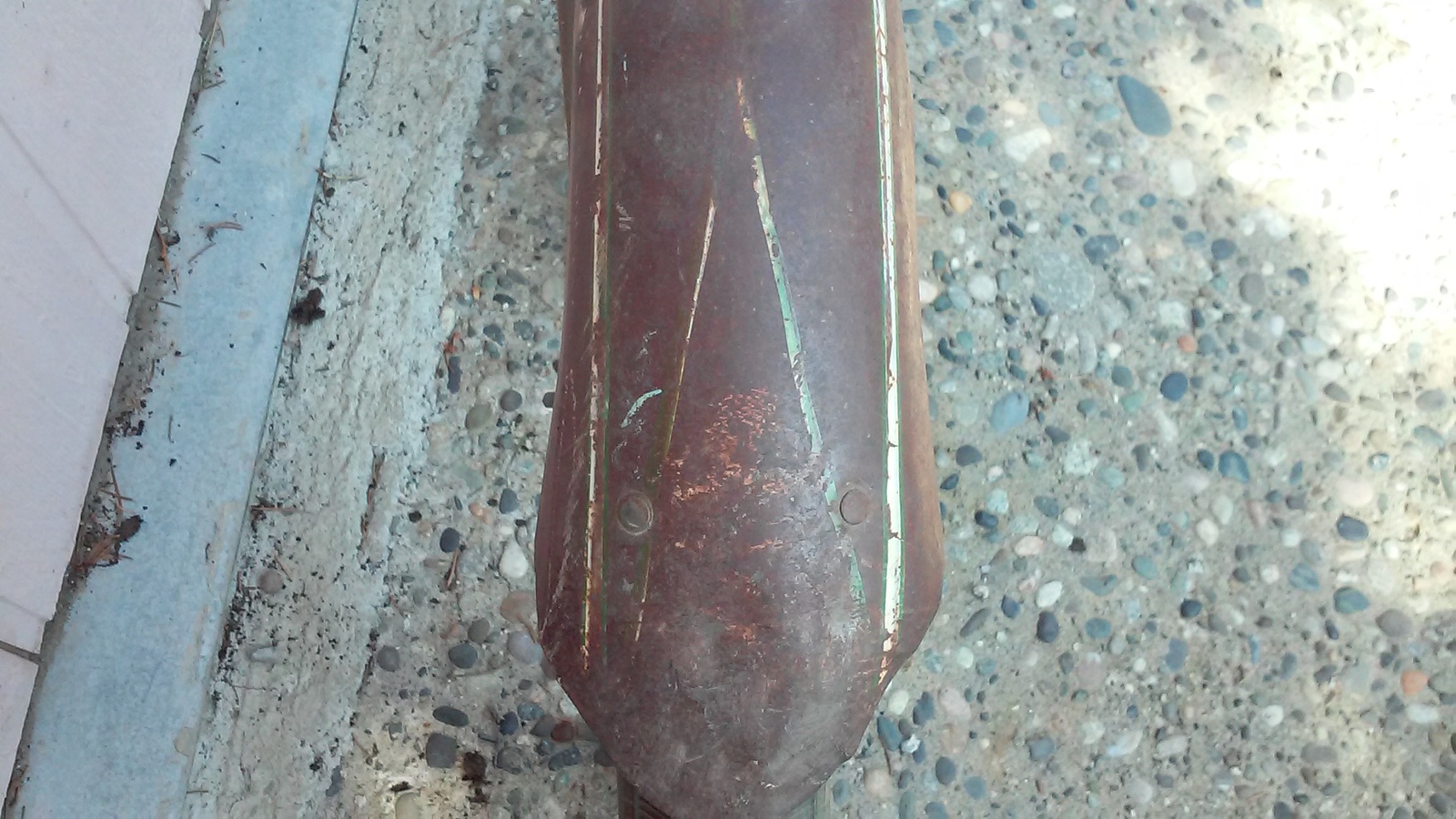 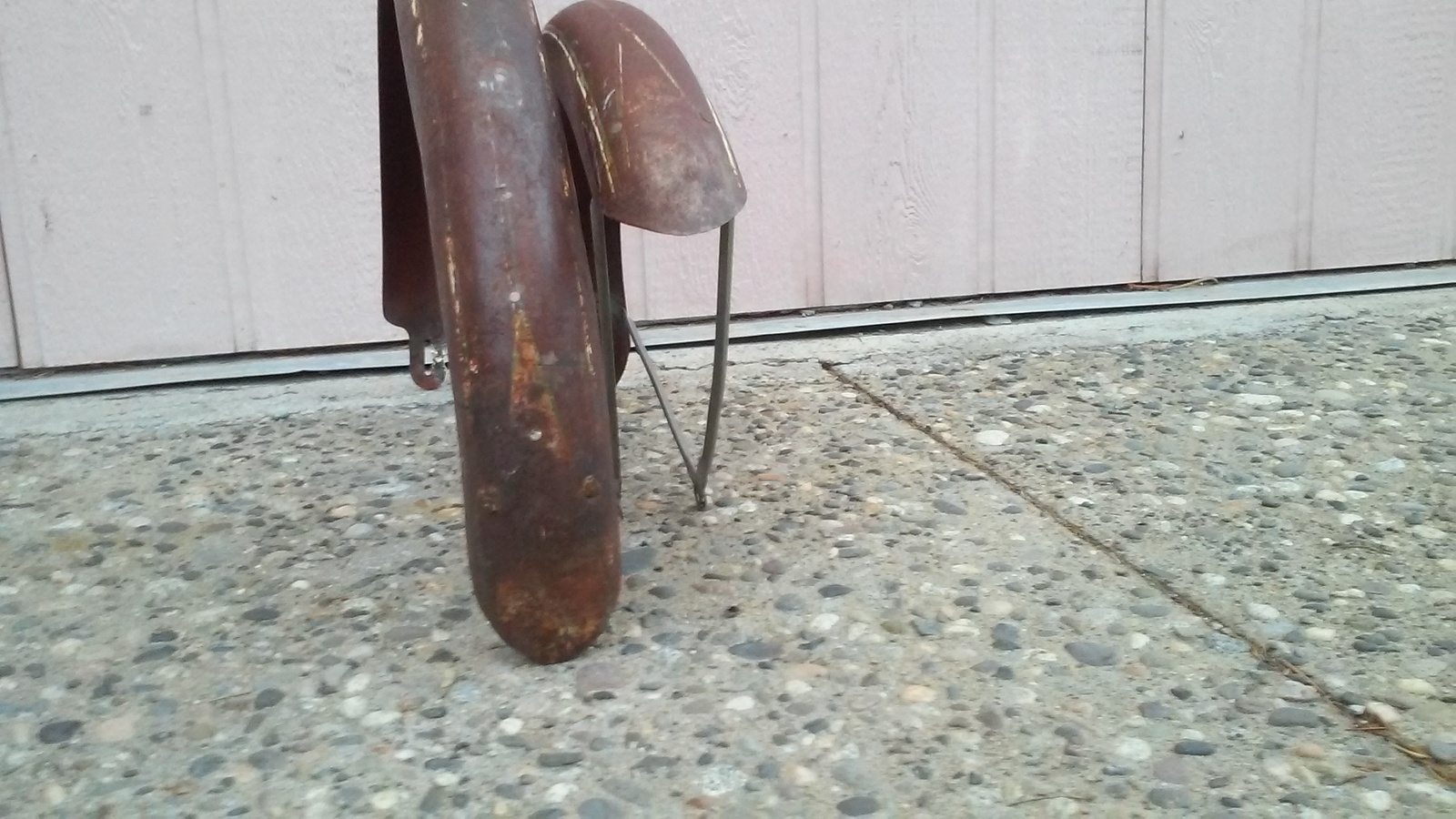 One thing hanging over my head is what to do about the seatpost. This frame has been broken and brazed back together, badly, in several places. This is the worst one. 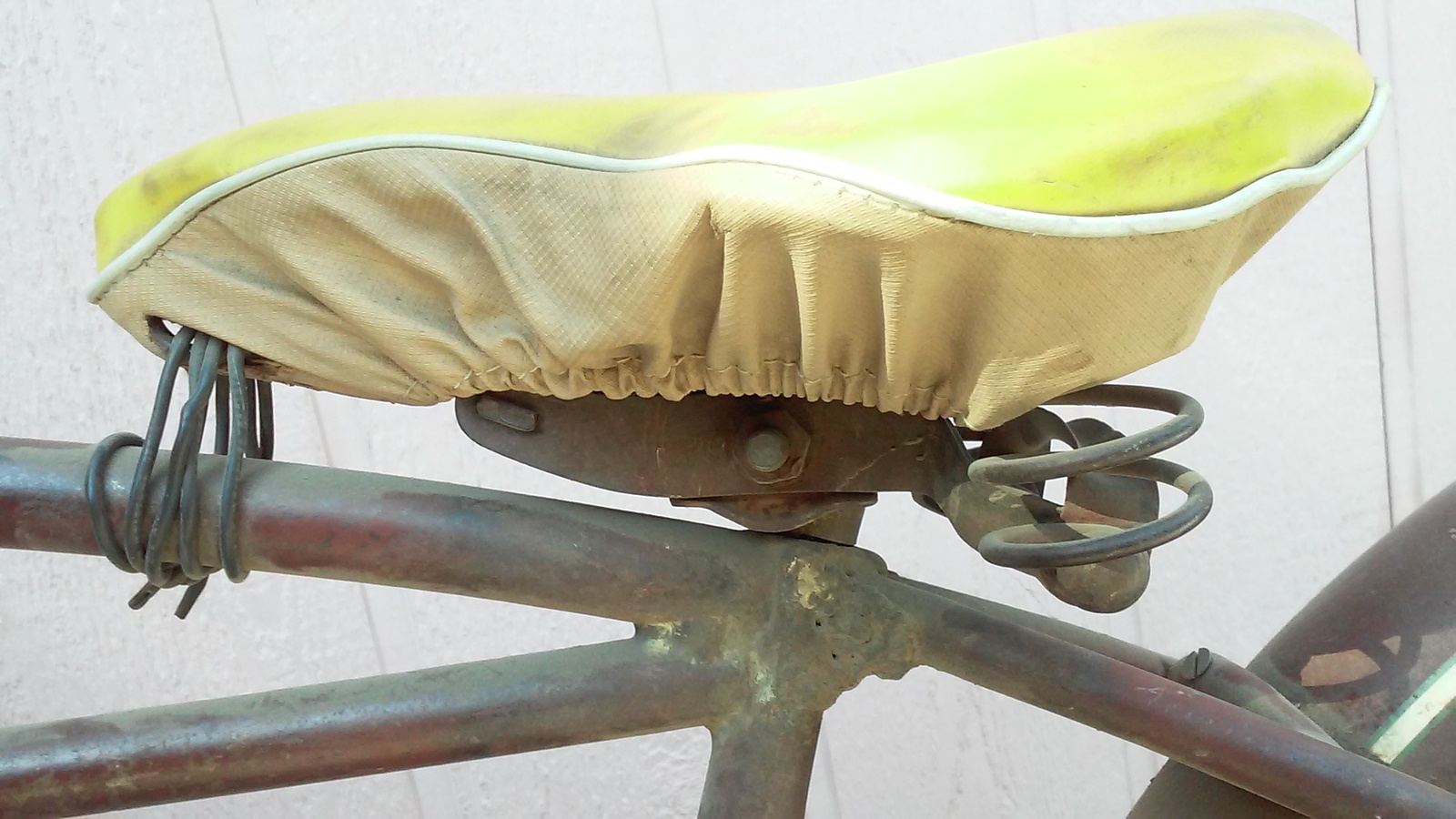 This frame uses Huffy's "Fits Sooner" seat post, meaning there is no seat post clamp, nor any place to put one, and the seat post is supposed to lock in place with a long bolt and a wedge, like a stem. It is bent and there is no bolt in it. Furthermore, after trying to fight it out of there I realized that that old braze job shrunk the tubing, and shrunk it a lot. I don't think that post is coming out of there no matter what, but it is just loose enough to be annoying. Surprisingly, the wedge was still inside and fell out of the bottom bracket while I was horsing around on the seatpost. The plan is for a really long "FIts Sooner" bolt so I can reach up and start the wedge from the bottom side. 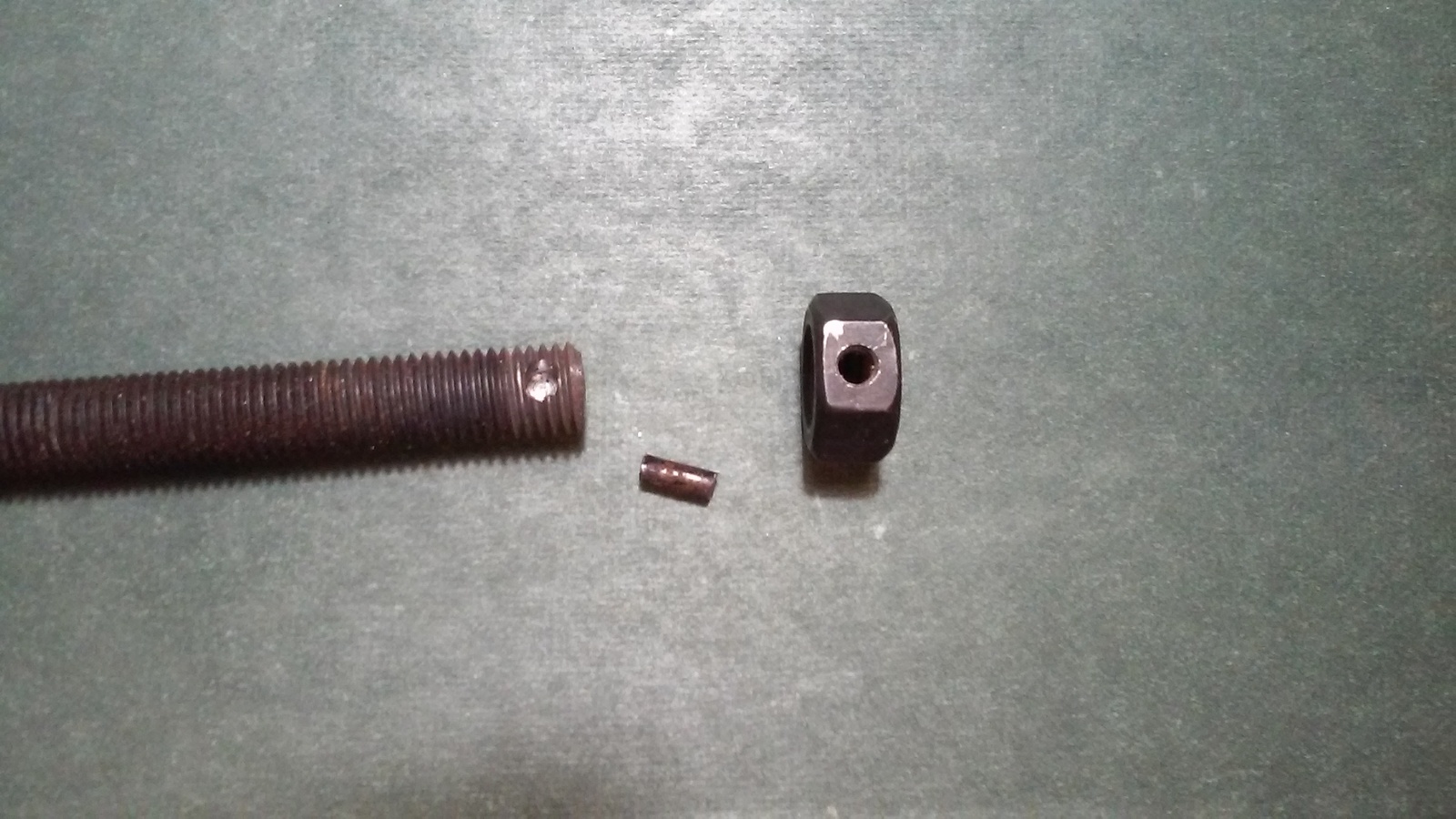 Braze it together and,,,, 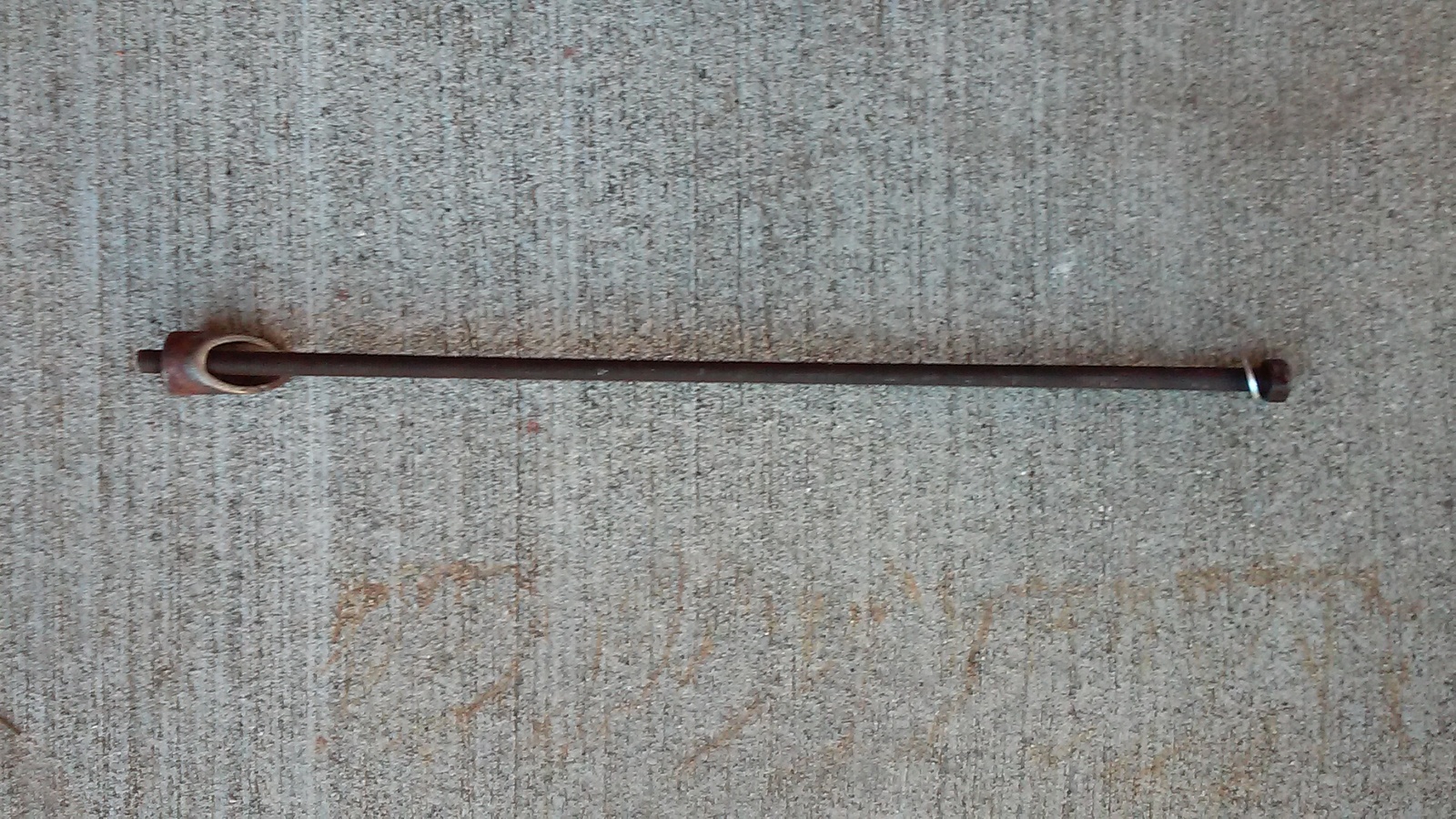 And... It tightened up. It looks like it is going to work. It really should have some kind of a bushing to keep the bolt centered, but that is for another day.

Cool bike. It's also cool that you've had it for so many years. The rebuild is looking good so far. I'm looking forward to seeing how it comes along. Nice work!
B

The long "Fits Sooner" bolt worked... but it didn't work. It seemed to lock the post, but there was not enough sticking out for the saddle to clamp on properly. That explains why the saddle mounting parts were all screwed up. Time for a plan "b" on the seat post.

Meanwhile, I have been straightening the fork over the last few days. It was pretty badly bent as you can see in the first post, and the steerer tube was curved. I had the steerer tube pretty close to straight a day or 2 ago and the fork tubes pointing in right direction at least 2/3 of the way down. Below that they may need more work. Earlier today I got the steerer tube the rest of the way straight. The fork spins now with no runout at the top headset bearing. The crown race was fairly shot, but a new one came in the mail today, a Wald. It was the only one I could find with a steep angle like the original. I hope it fits. Maybe the headset was Wald. Nothing else in it looks like the current Wald stuff.

I made a new discovery though, the stem wedge is stripped. Apparently the bent steerer tube was the only thing holding the stem in. Off to the classifieds I go....
B

I decided to try to pull the seat post up. There was threaded rod left over from making that "Fits Sooner" bolt, so I threaded a nylock on it from the bottom, with the idea that hopefully it would get stuck where the seat post necks down to a smaller size. I cut as much of the brazing booger out of the way as possible, put a big socket up on top, some greased washers and a nut and started pulling the post up. I figured I needed about 1/4". I got 1/2" easily, so I just kept staclking things on top and pulling. Eventually I got the post all the way out. The part of the brazing booger I couldn't get out of the way mangled the seat post some more, but it was already a bent up mess and probably beyond saving. Yesterday afternoon one like it popped up on Ebay and I got it. Now I need to grind the booger out of the inside of the seat tube so the new seat post will go in when it gets here. @Gordon found me a stem wedge, so that problem is solved. Today's project will probably be to see how straight the frame is, and straighten it if it is bent. More to come....
B

So I began to check the straghtness of the frame, using Sheldon Brown's method with the strings, as shown here. This method has served me well in the past: 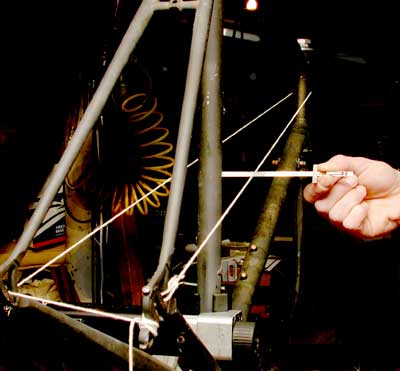 But, that is just for the right/left position of the rear triangle. First you have to verify that the seatpost is perpendicular to the bottom bracket, and that the headtube is parallel to the seat tube.

The faces of the bottom bracket are not parallel to each other. Annoying, but not terribly surprising considering the cups were spinning in the bottom bracket shell. I'll have to fix it with a file I guess, just one more thing to do.

The headtube is also out of line with the seat tube. Only a tiny bit, but you can sight it and see. At this point, I decided to go ahead and check the rear triangle with the strings to see how good or bad it was. It was off to the left significantly. Not a ridiculous amount, but bad enough that it definitely needed to be corrected. Also the rear forks were not parallel to each other.

Ok, now I am officially surprised. This bike always went straight back in the day, and was super easy to ride with no hands. Correcting the bottom bracket wont go quickly, and twisting the headtube back straight is one of those things you really want to get right on the first try. I decided to pull the rear triangle back a little closer to where it needs to be. It pulled right in and was looking pretty good. Then I noticed this: 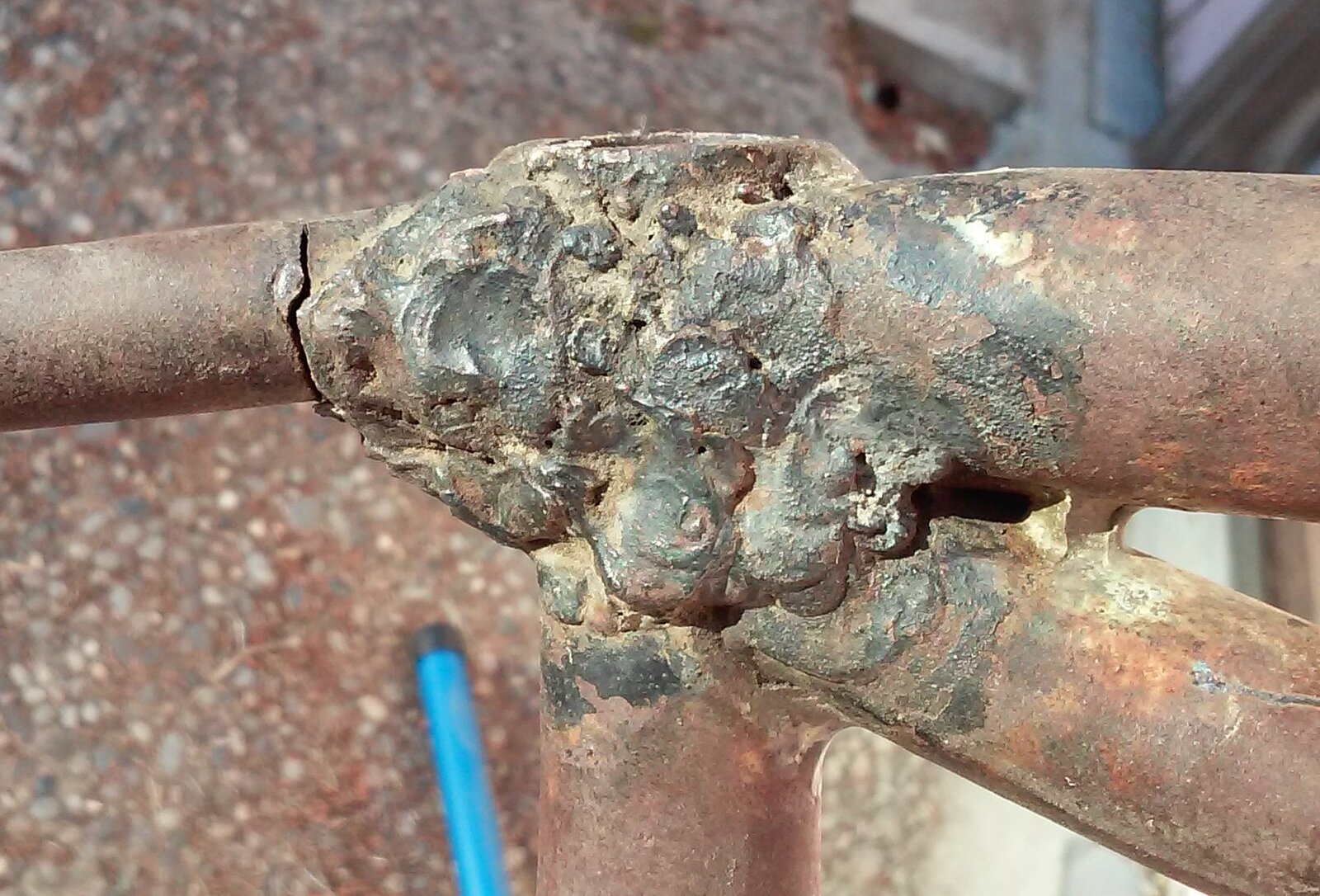 What is this, hard mode?

You've got your work cut out for you on this one. It will be very rewarding to get your old bike back up and running though. It's a good start!
B

The cure for everything on this bike seems to be more brass... Here's the repair. Not professional i guess, but considerably better than the old blob it is adjacent to. Speaking of the old blob, it turned out to be mostly steel. Apparently someone did a really ugly weld, broke the frame again, and then brazed it together afterward. 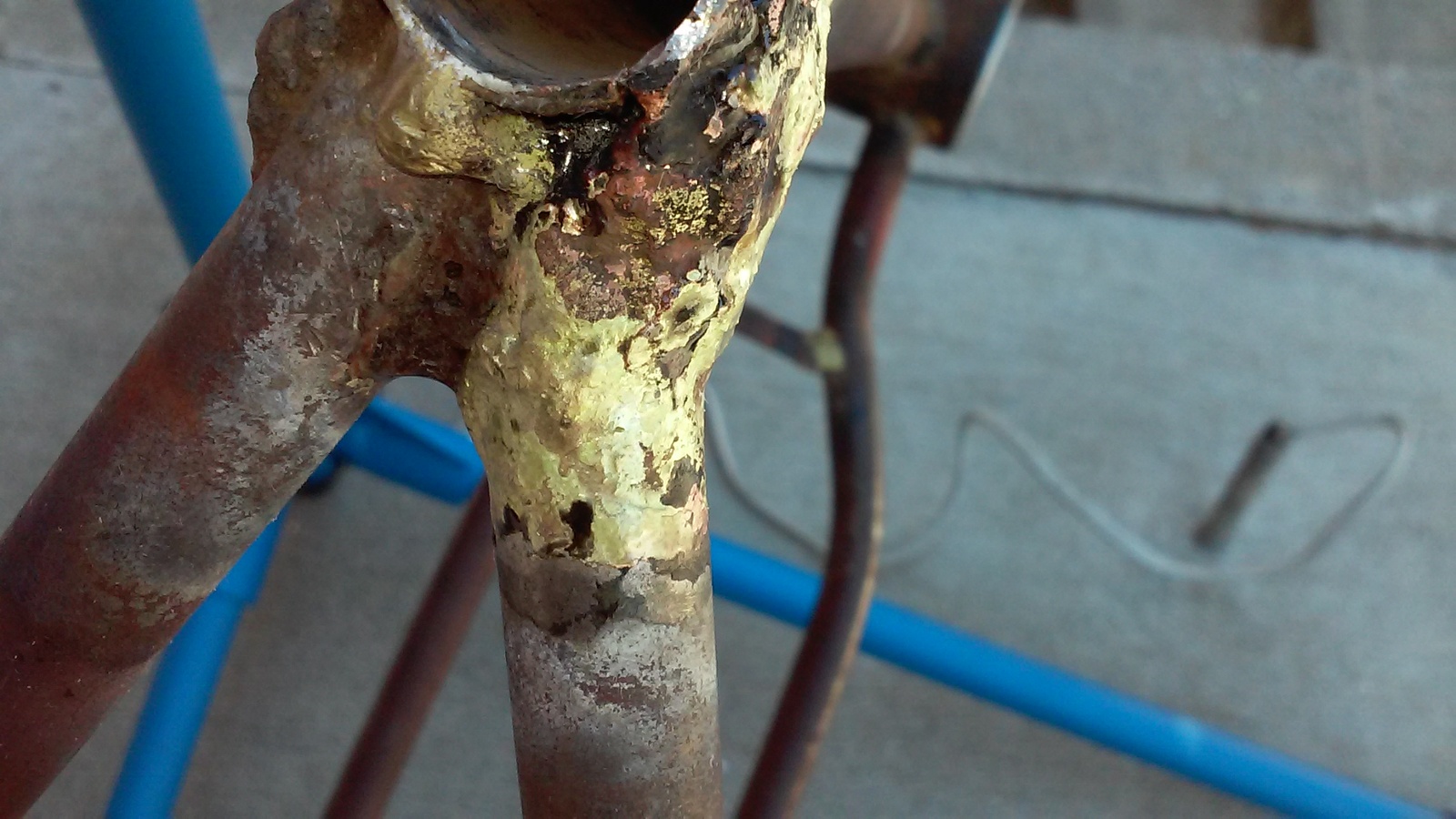 I ground the booger out that was preventing the seat post from coming up. That part was all steel. 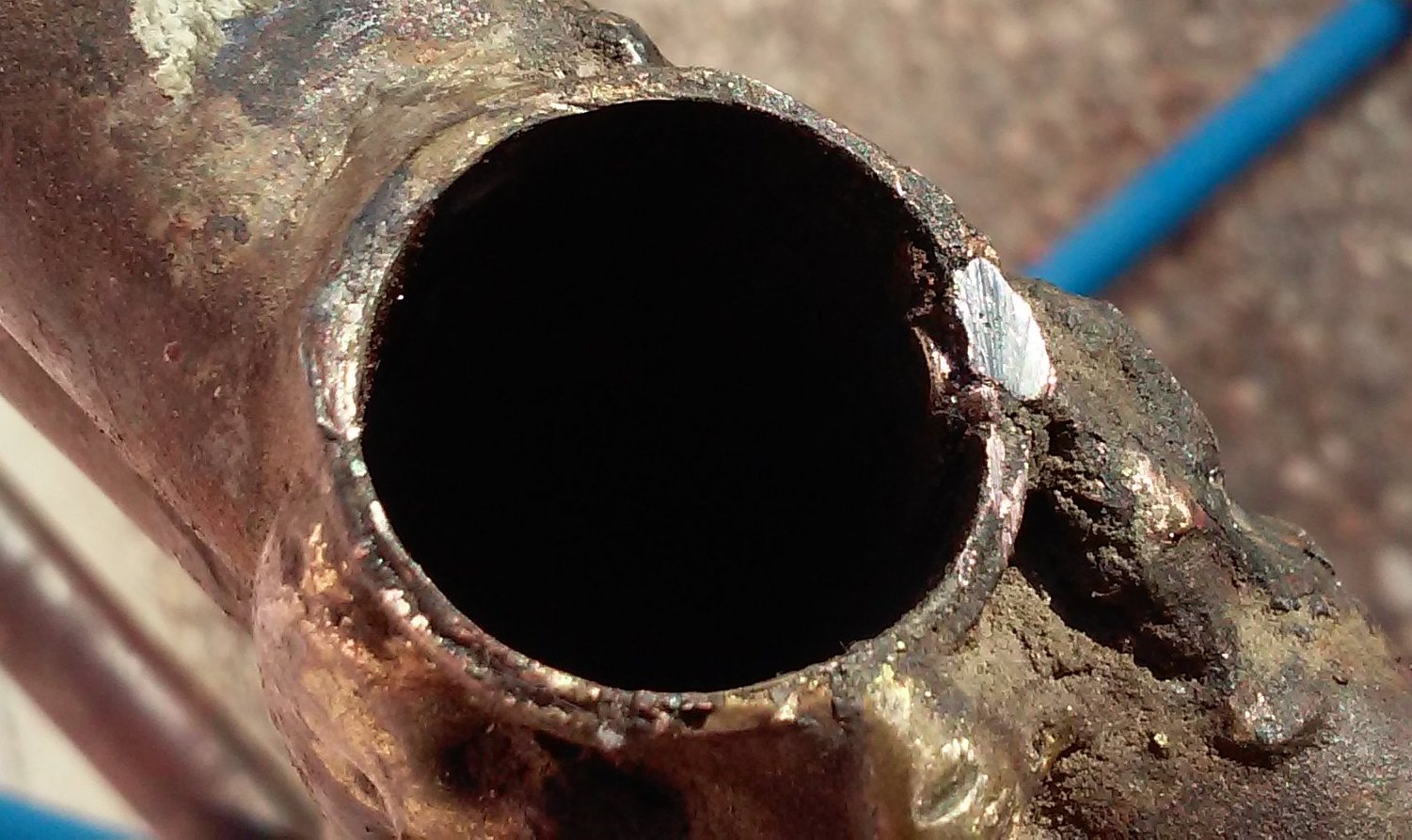 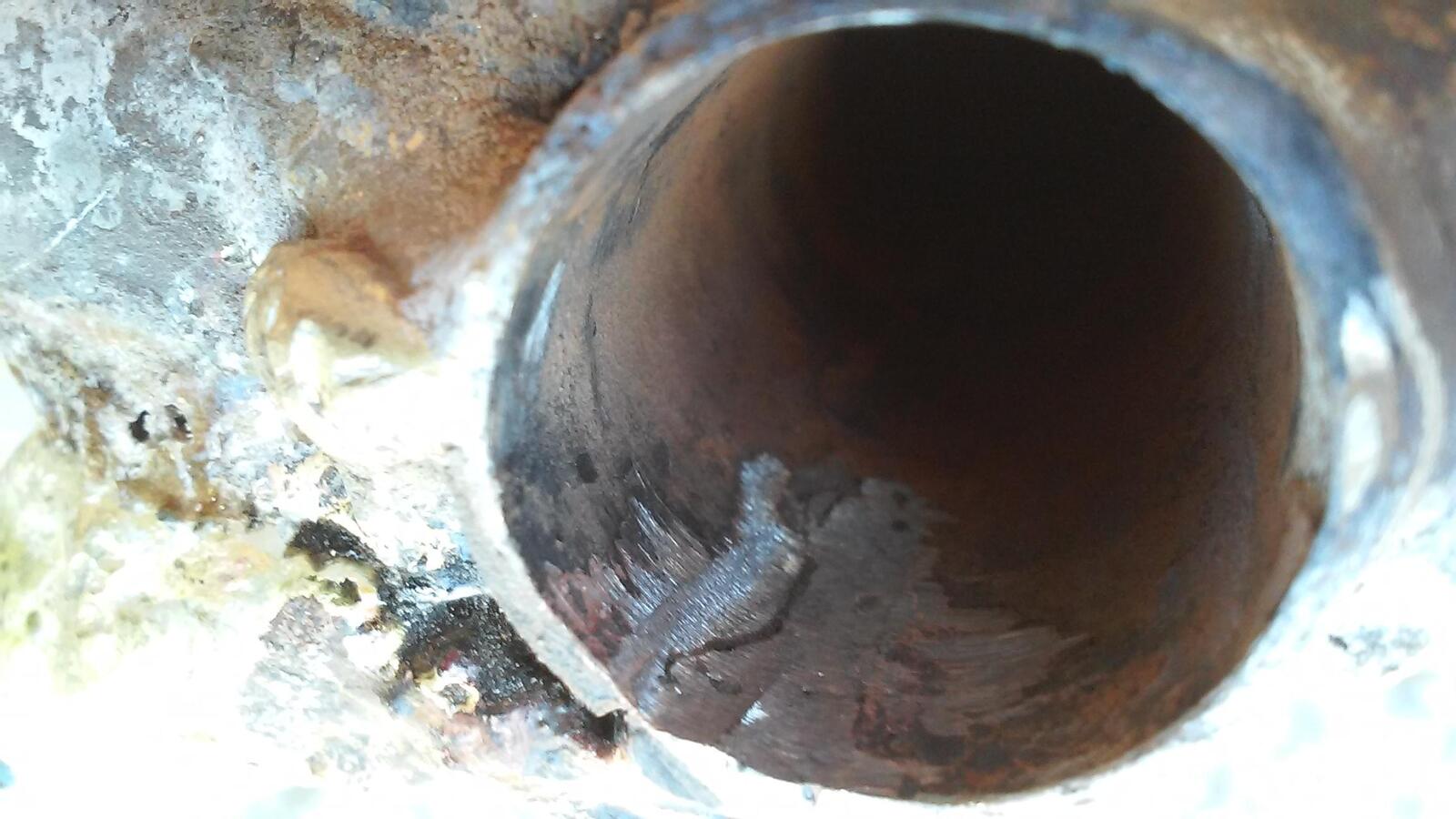 The new seatpost from ebay arrived. 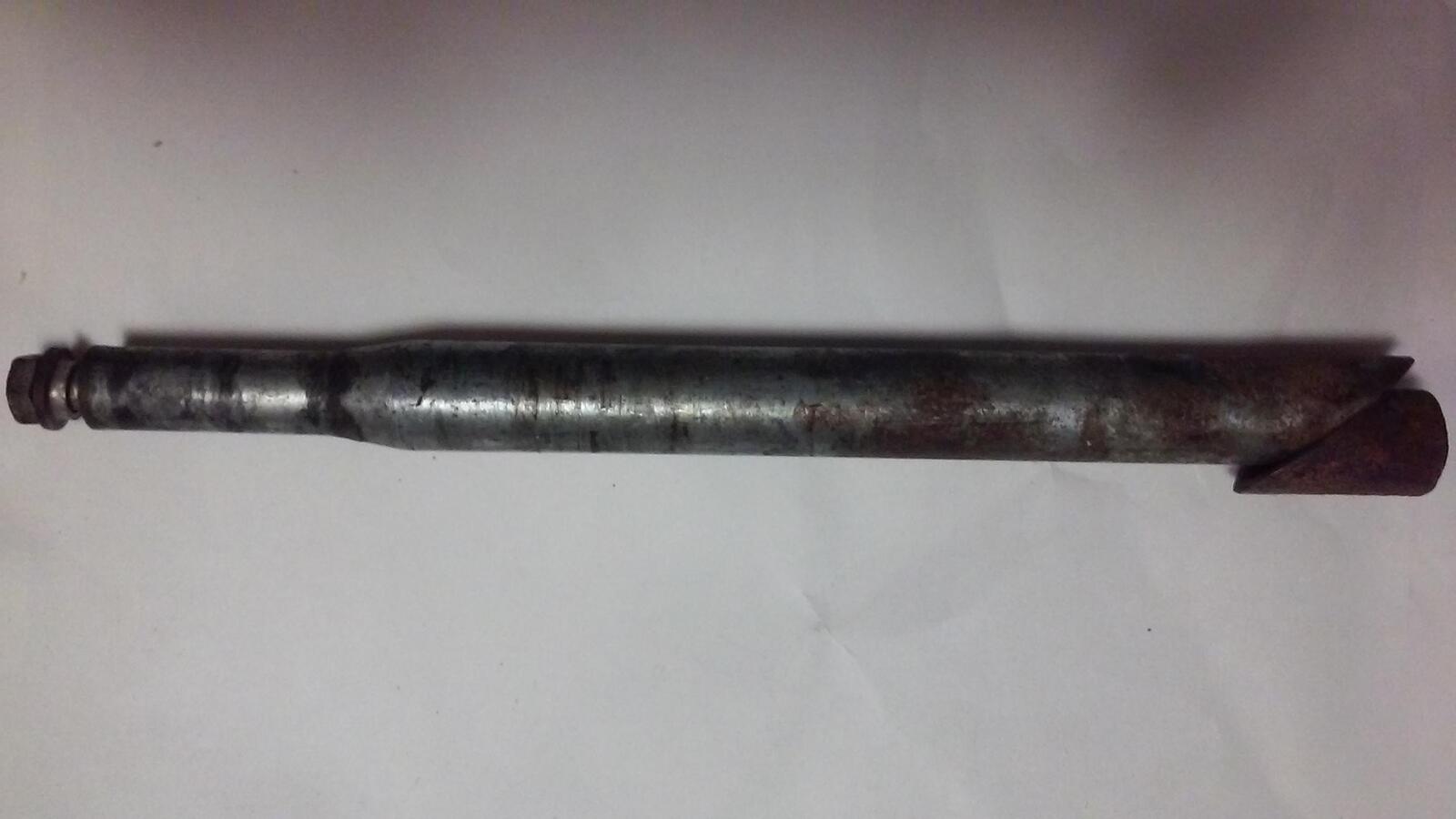 I mentioned earlier that the bottom bracket faces were out of square. The cups had been spinning in the tube. You can see more old braze repairs here.. 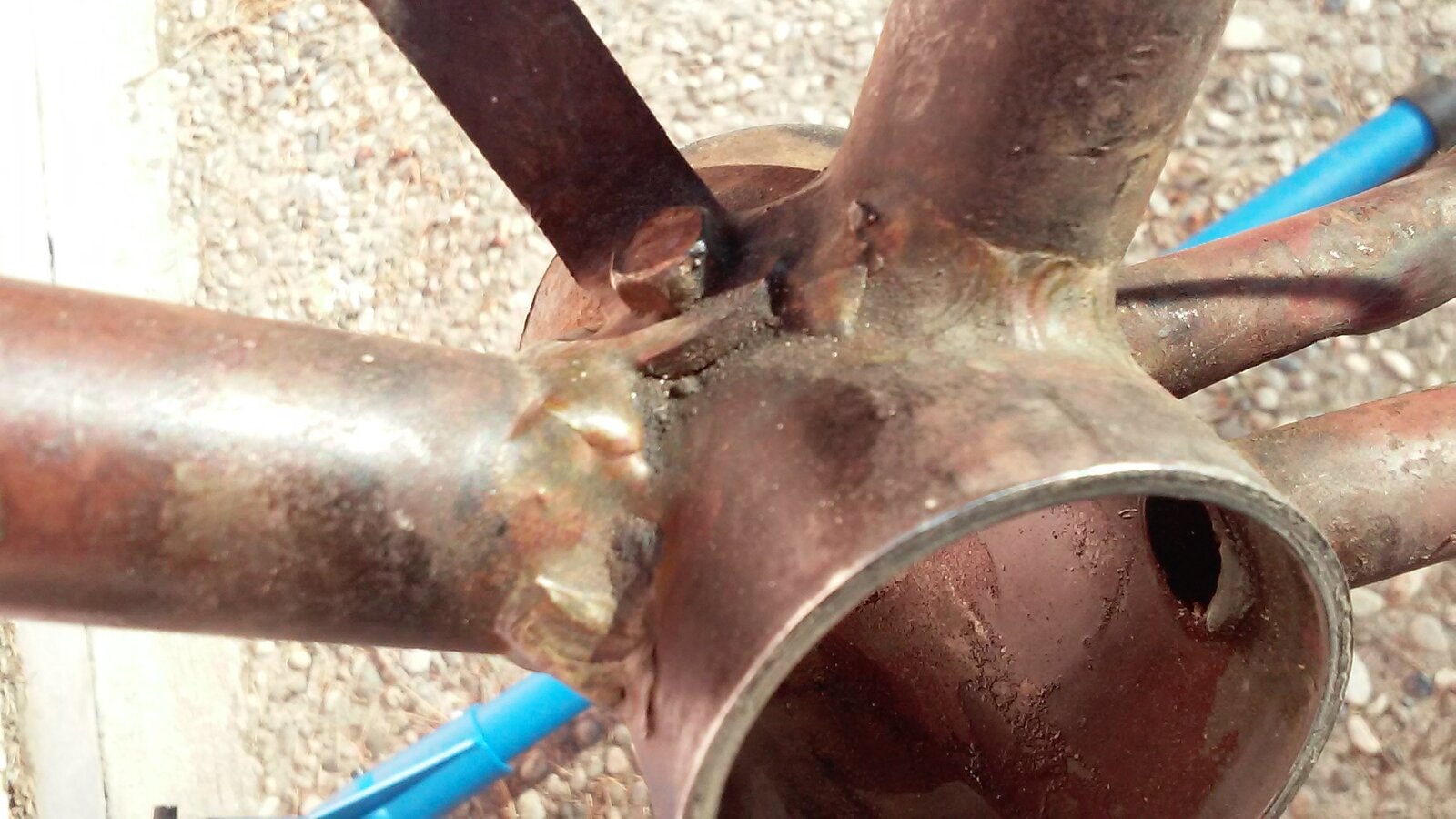 I assembled it with the crank and all the nice bottom bracket parts I got from @kirk thomas , everything except the chainwheel, which is still the original one from the bike. The level didn't lay flat. A quick spin of the chainwheel confirmed it was really bent. It was wobbling back and forth, and not in a way you could hit it with a shot hammer and straighten. It was wavy, and there were teeth pointing in random directions. LOL! Am I on candid camera or something?

You can't make this up.
B

After about a half hour of prying and bending with bars, crescent wrenches and so on the chainwheel ran pretty true. I didn't measure it but probably less than .015" axial runout. I still didn't trust it for taking any frame dimensions though, so it was back to my friend's machine shop to use the big square again. I was able to determine that the down tube pointed slightly to the right in relation to the crank, and straighten it, at the same time taking out the twist I noticed earlier, and bringing the headtube back parallel to the seat tube. The front triangle looks good now, and the rear is not horrid. The bottom bracket shell has been filed and is square to itself. With the front triangle straight, I took it back home for more work on the rear with the string method.

A quick string check says it isn't too bad, only out by a couple of millimeters, and the hub spacing is right on at 111mm. Since the rear forks are not square, I decided to fix that first, and then see how the hub spacing and strings look. 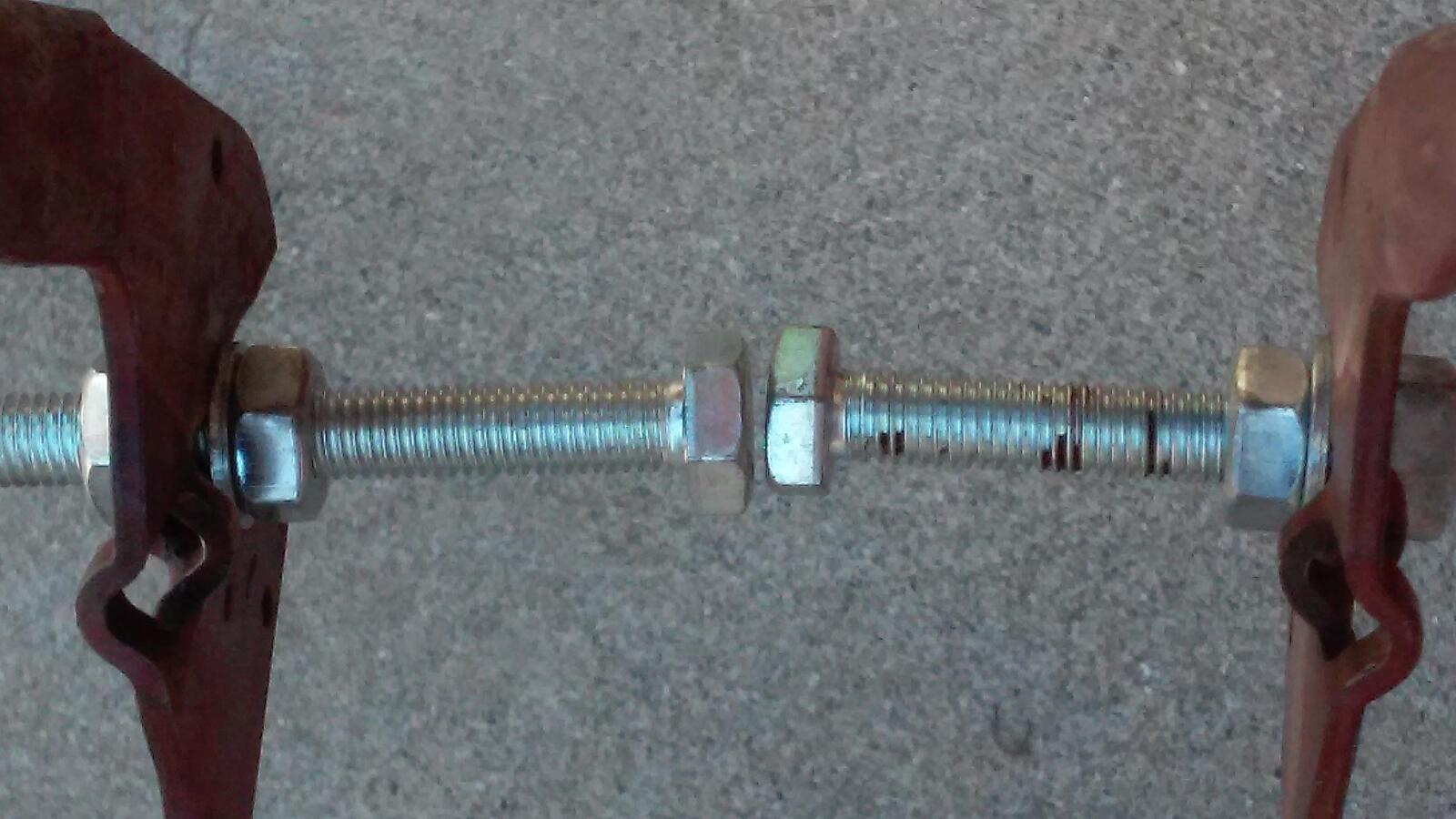 I got that pretty close and was checking with the strings again and.... What is THAT? Is that another CRACK? 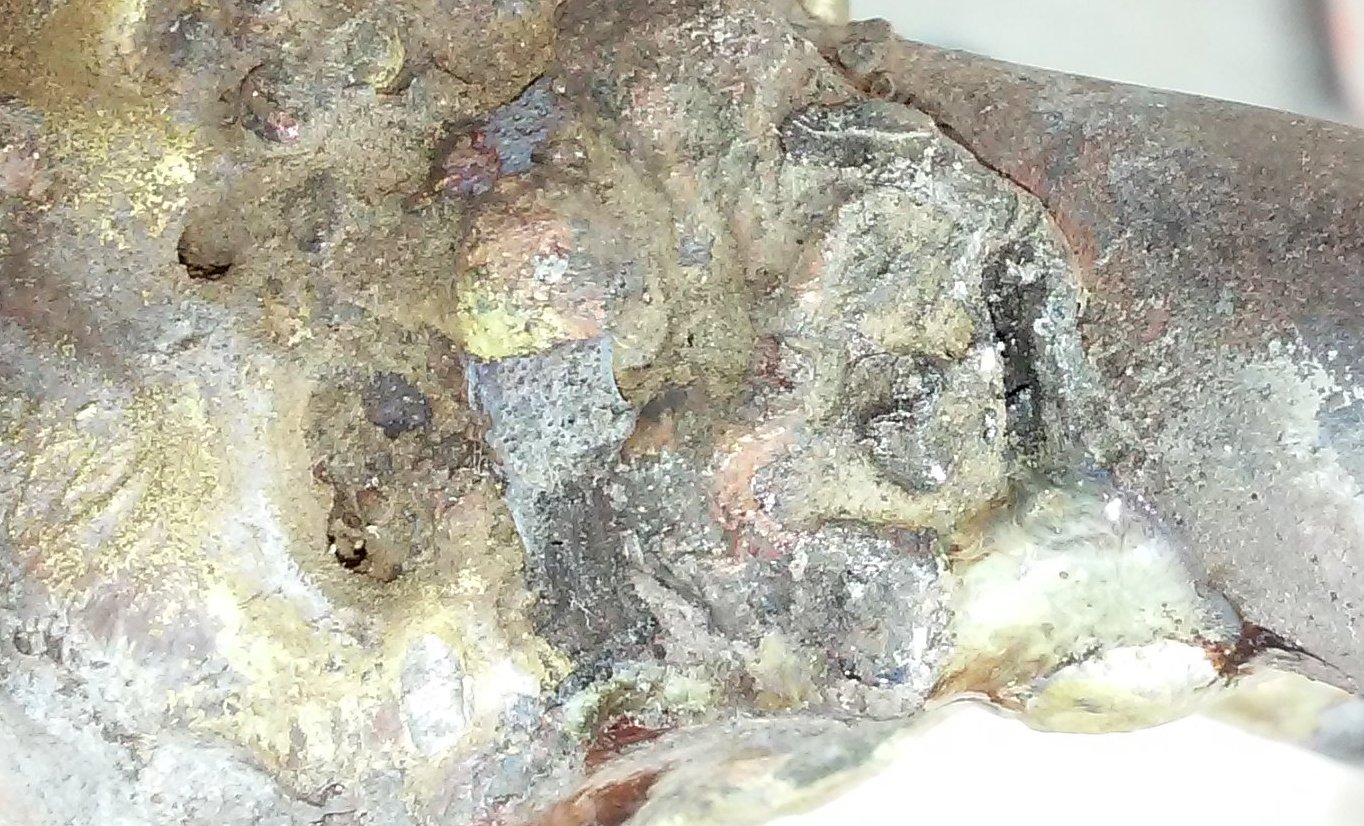 Whatever it is I can see through it. 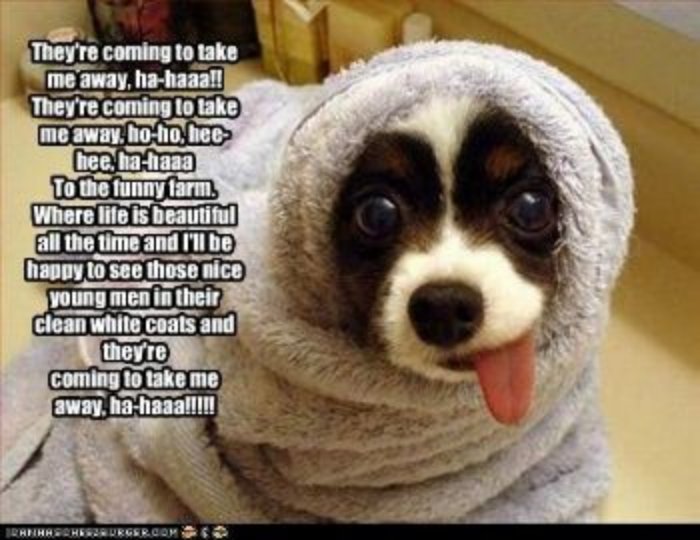