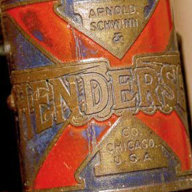 Several source on the topic over the years but a few I can give you right now that have bits and pieces of the whole picture are:

These are much more currently written articles using the same information I have come across over the years.

Try to keep in mind the subject of boneshakers, high-wheelers, bicycles, tricycles, veloco's, safety cycles, moto-bikes and others differs greatly in the far past as oceans kept certain technology and implementation of technology sometimes localized.

A set of "Forsyth" safety cycle spoon brakes adjustable handlebars were readily available for Bikes available all of Britannia as well as German and french principle countries.

However the exact same set of bars and brake were available on a regular basis in the states over 2 years after people in Britain had them. Due to shipping across the pond as well as getting setup in marketing past the east coast they were seen for the first time in regular sales in the St Louis catalog at almost 2 years after introduction and then shortly later on the west coast. No planes, few trucks leaving trains the way to ship parts and even if you had the stock in your warehouse in say NYC there are just so many train cars moving so parts moving from east to west was a scheduled event set up far ahead of time. Even the President of the US had his own personal train and had to work around schedules, so to put bikes against, crops, munitions, larger manufactures (factory machines, tractors) and sustainment product, bikes were pretty low on the list.

Shipping and lack of being able to pass information easily made it difficult not only for parts companies but for full assemblers to keep up. A catalog was printed once a year for most companies and then built up to 18 months after the catalog was shipped out when orders came in.

All of this it to bring about one strange fact, overlap of style and technology in the same location.

While Britain was getting into safety cycles the stores were still selling the Velo's of France and high-wheels of Germany. All the while the US was creating its own styles but also still importing the "older" bikes the EU and Brits were getting tired of.

Keep in mind in the late 1800's there were full suspension multi-speed bicycles with front and rear brakes, lights, full fenders and more adjustable frame and handlebars than we have today. And most of that came standard in the earlier time as a buyer was expecting to receive the better of what was available due to company competition vs. today where a buyer is raised to expect the least and poorest product available.

We still don't have some of the technology that was available that was standard then as manufacturing processes have changed and governments have gotten stricter on material creation and processing. As well the "art" of sand casting, tube bending, lost wax molds, to name just a few trades are almost GONE.

I am proud to know the trades I just listed but I don't have anyone to pass it onto so my information will be lost as well. And that brings us to today where we have an amnesiac society that loses more than they gain over the years.
Reactions: Ed Minas
You must log in or register to reply here.
This ad goes away when you register for an account!
Share:
Facebook Reddit Pinterest Tumblr Email Link
Top Bottom