Just started on the rehab of this '56 Racer. Bought this a couple of years ago at a resale shop. I don't normally pick up women's bikes, since I have several, but this one looked original, and had the unique "speedy" Schwinn lettering. 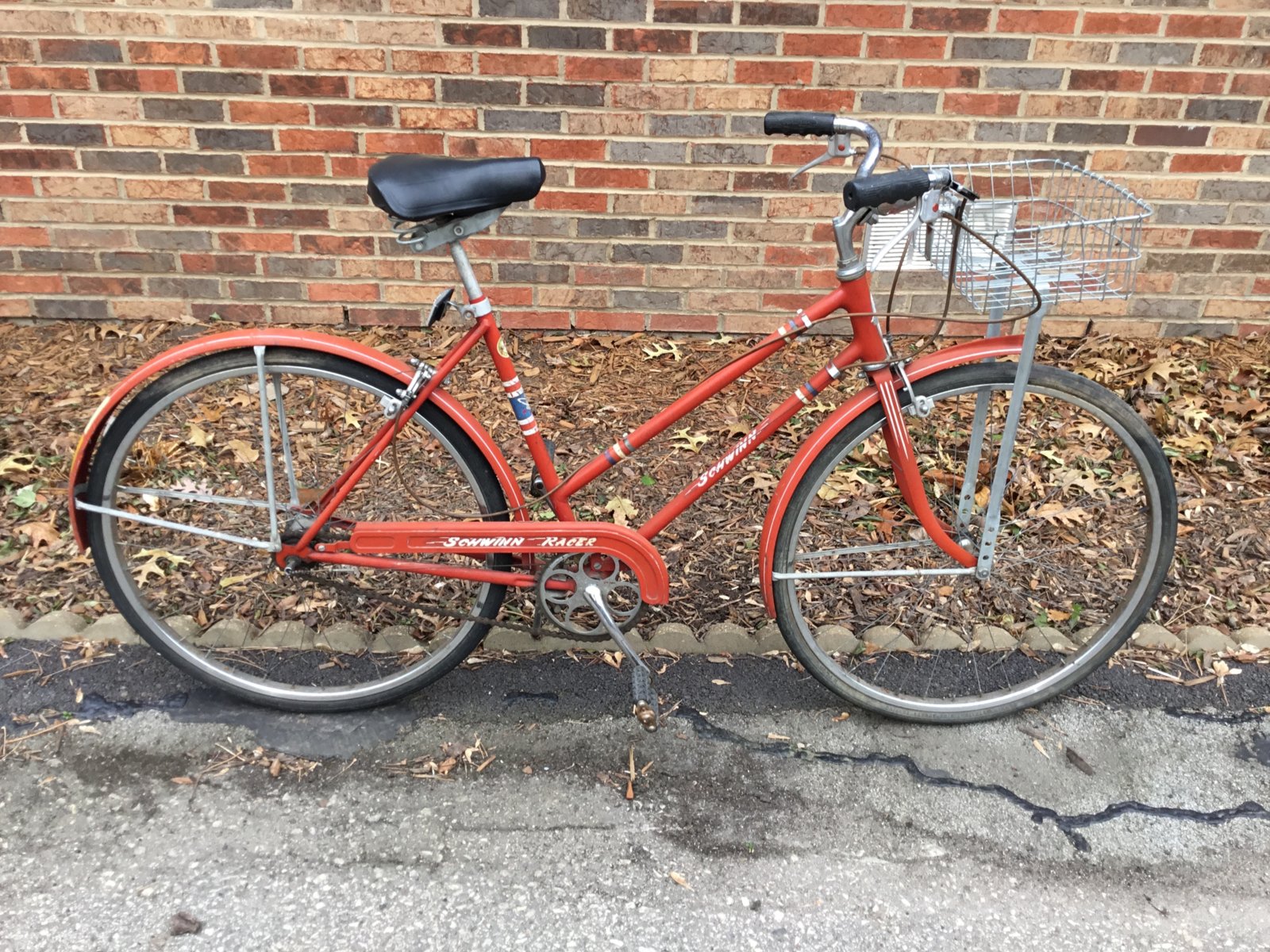 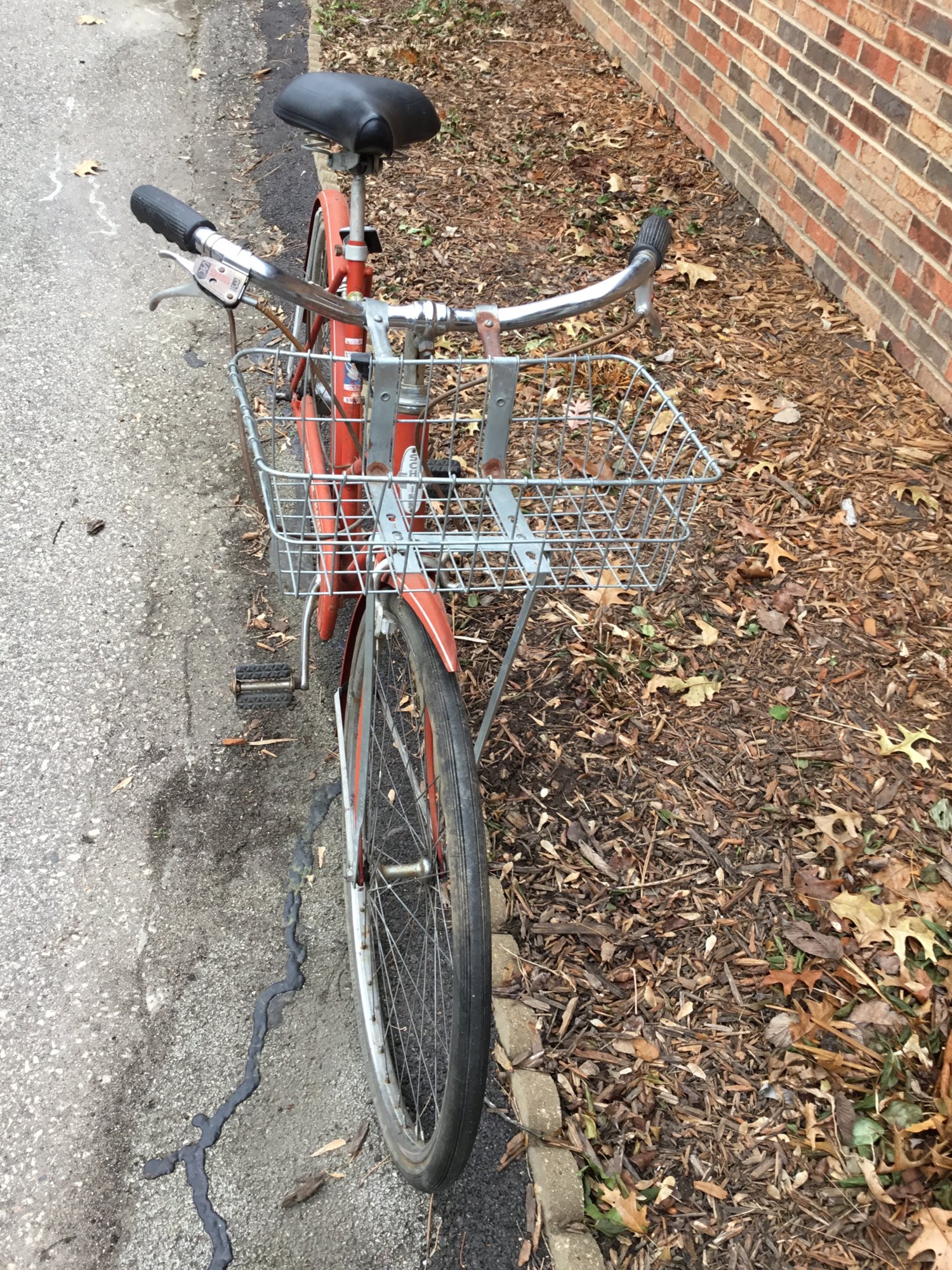 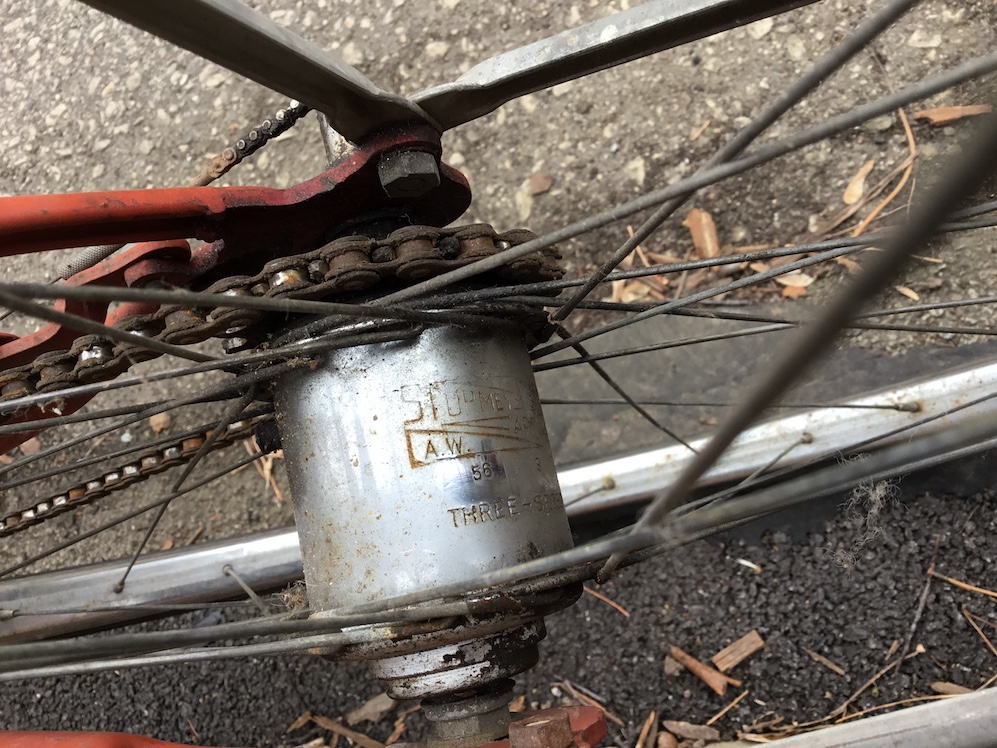 I'll use this thread to document the progress and interesting things I find along the way. First, I found this on the tube in the front wheel. I've not seen an inner tube with "Traveler" marked on it. Did Schwinn do this for the lightweight bikes in the '50s, since the Traveler was the TOTL lightweight? 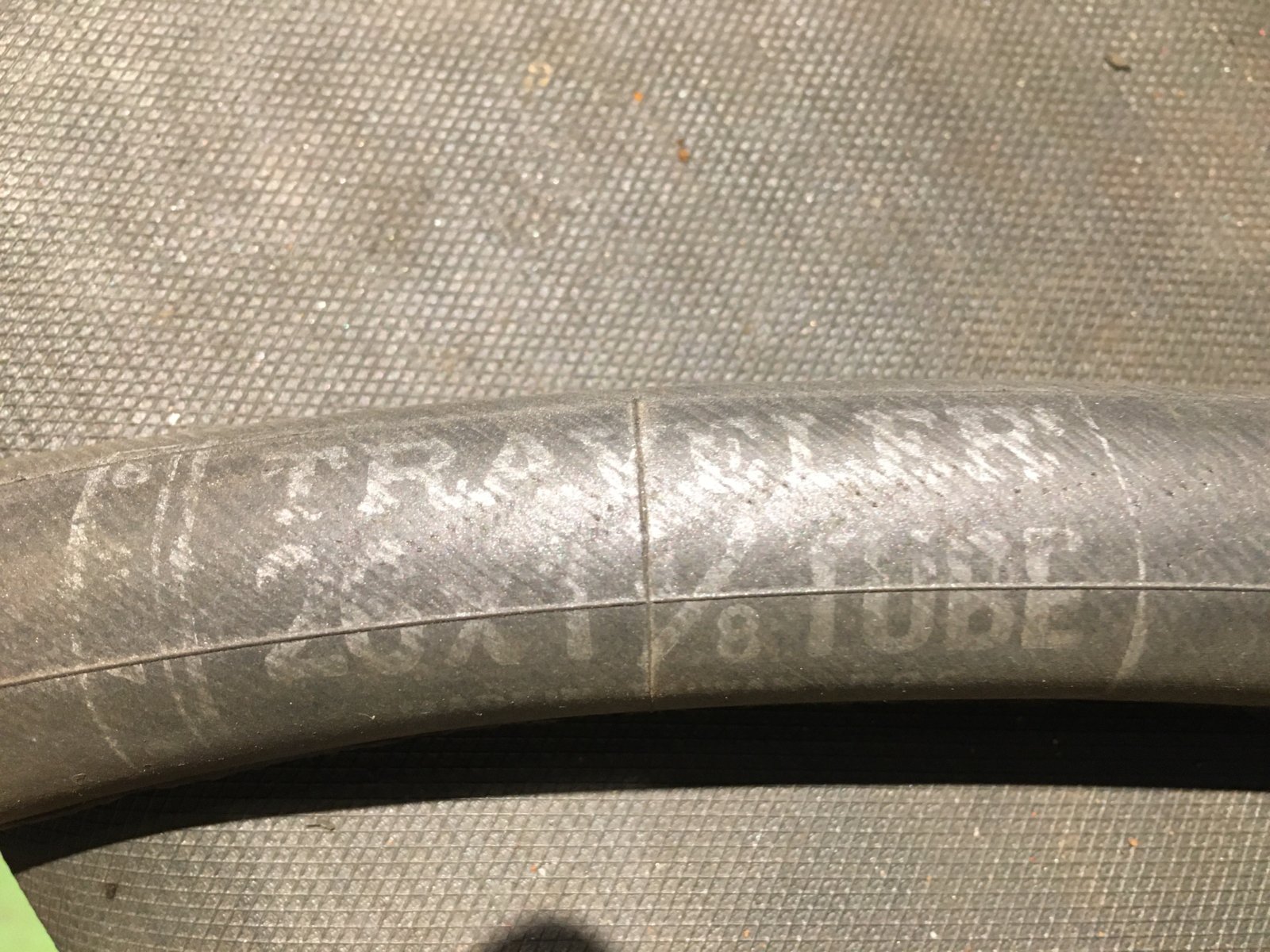 I know at some point Schwinn contracted Asthabula to make the cranks, but this one is clearly made by Schwinn. Kind of cool! 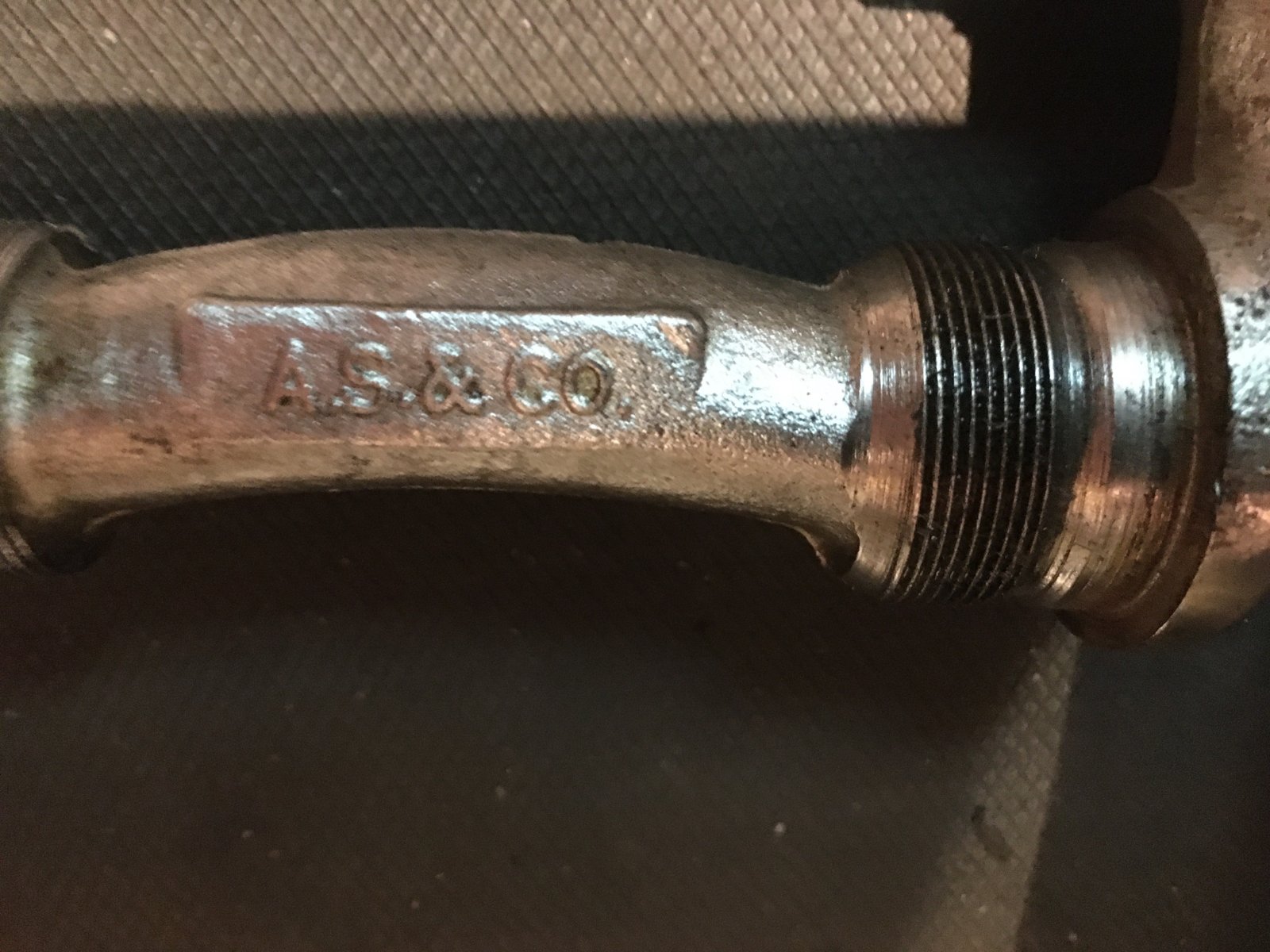 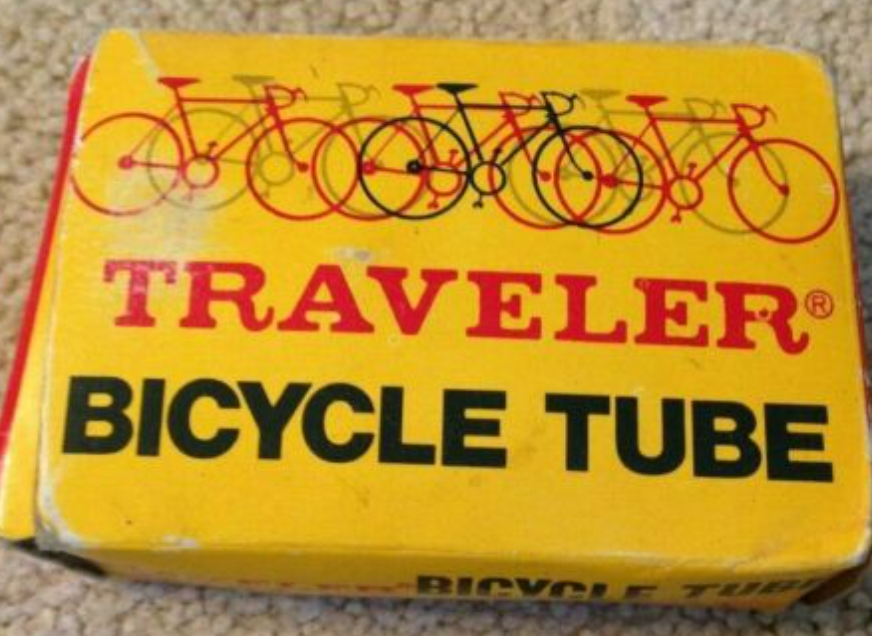 Interesting, so no connection to Schwinn at all.

Once I get the 3 speed hub apart, the rims will go in an oxalic acid bath for de-rusting. I'll clean up all the parts for the hub, then get at the headset. I'm pretty excited to see how the paint looks once I give it a coat of wax. The color should be opalescent Red.

It was a schwinn product. The "TRAVELER" logo is exactly the same as found on the 60s travelers. Here is the side of the box. Looks like the tube went into the 80s too. They came in various sizes, so looks like it was Schwinn's line of tube for a while.

Only the "deluxe" racer model came in opal and radiant colors. The regular racer came in regular enamel colors. You have "spitfire red." 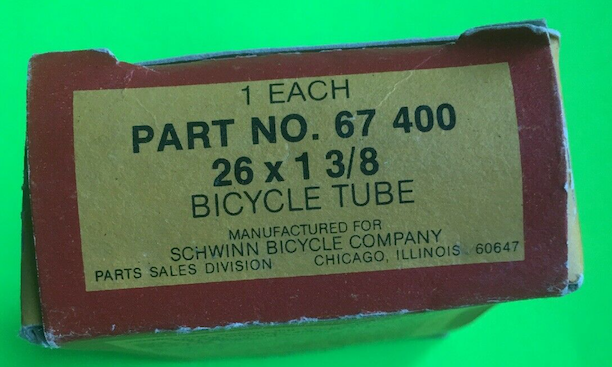 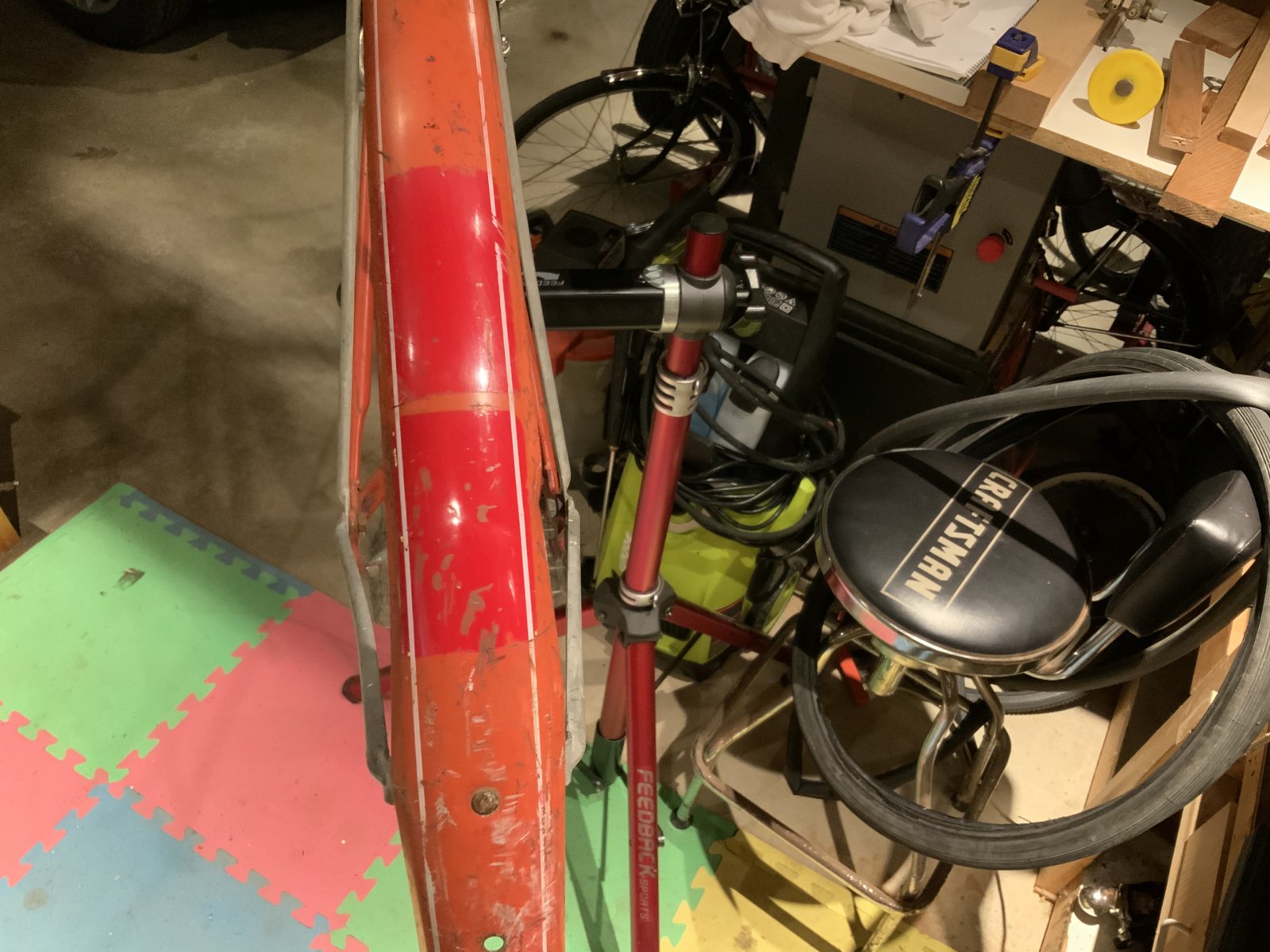 The Racer is not shown in the ‘56 catalog, but is on the ‘56 price list as a ”promotional model.” All lightweights in the ‘56 catalog are listed as coming in “opal” colors. “Spitfire red” is listed in the ‘57 catalog as a color for the Racers. So, which color is it for a ‘56 Racer? Are “opal red” and “spitfire red” different in name only? I have no idea. We’ll see if polishing/waxing brings the color back to the original.

Also has the “tombstone” seat clamp bolt. My ‘59 racer has the round head, so sometime in there that switch was made. 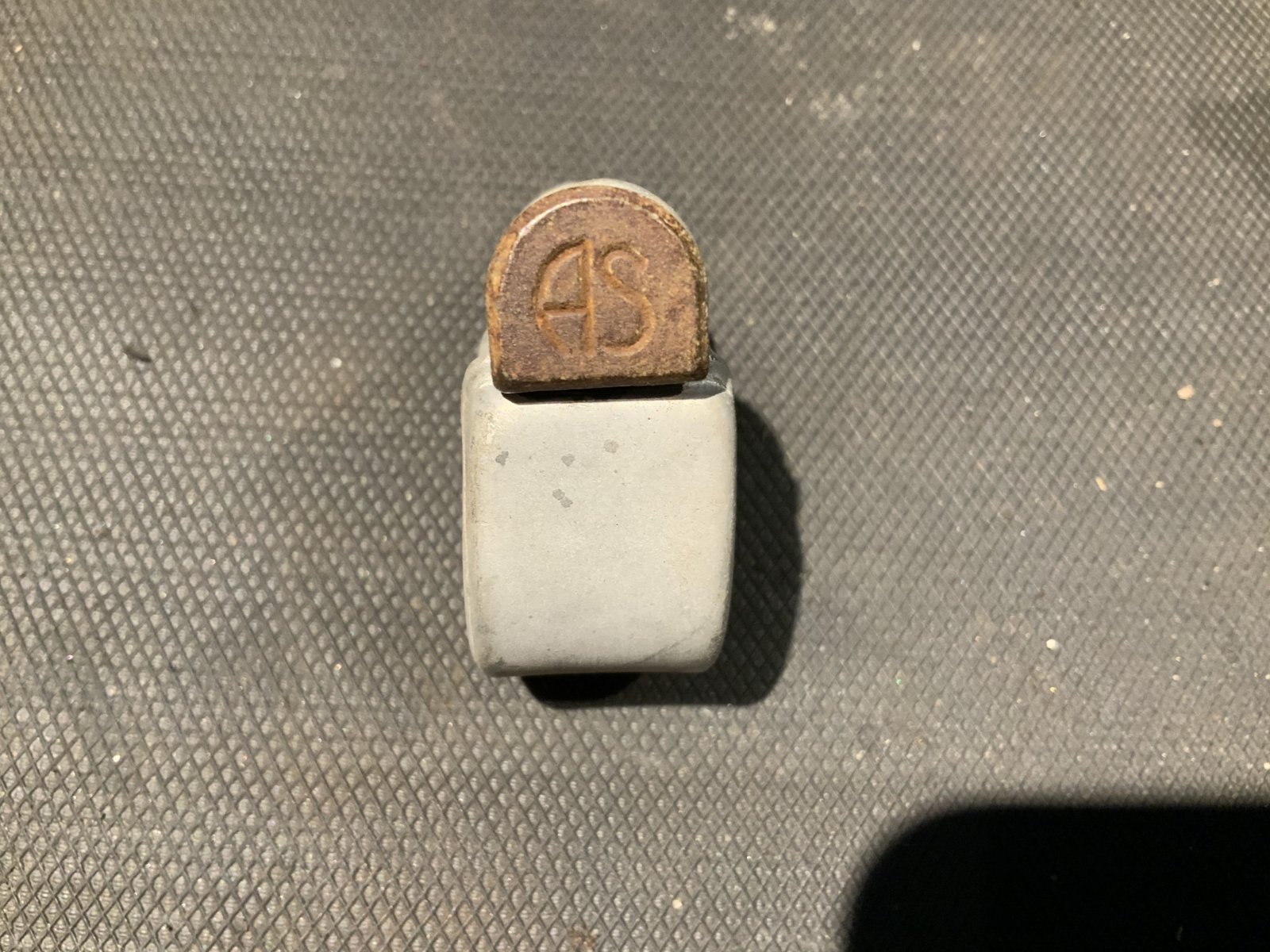 It's spitfire red. The deluxe version is the one that got the more "deluxe" paint colors (opal / radiant). 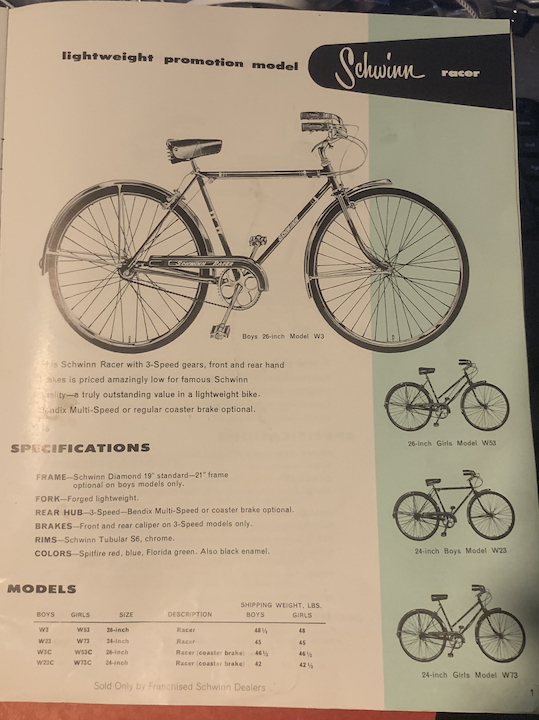 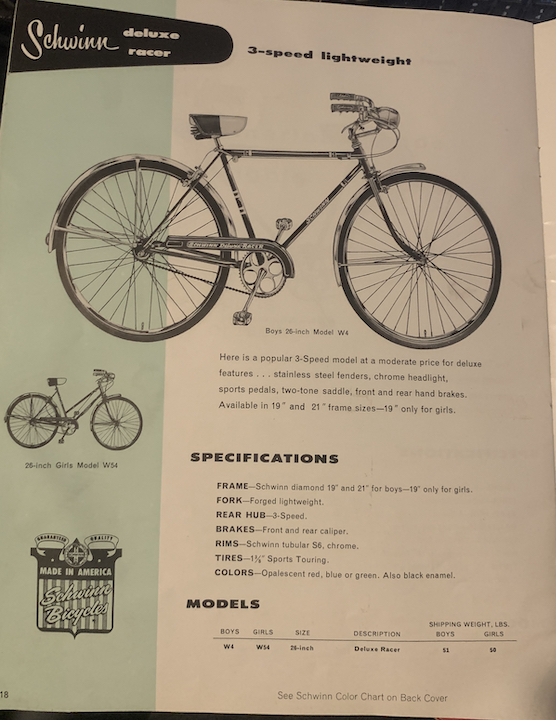 Well, you had to open the can of worms haha...

The color selections are consistent through the 50s racers the only difference is the deluxe racer switched from opal to radiant colors in '58.
1956 catalog (what I posted above)
1957 brochure
1958 switch noted to radiant in price list / 1957 price list for comparison - Note - to my knowledge - the racer was the very first model to receive radiant paint colors in 1958, and in 1959 the rest of the line switched over.

Now this is where things get a little weird. In 1953 the World stopped (note discontinued models in 1954: world). In 1954 enters the collegiate, that essentially replaces the World as their base model lightweight. In 1955 the collegiate ends and per the price lists the "World" pops back up. The world is also shown in this 1955 catalog, but no mention of the racer. The racer does start showing up in the 1956 price sheet as a promotional model. However, there is material out there showing a '55 racer and I have archived many of these I have found (below). My assumption is that somewhere in '55 the switch occurred from world to racer. And some of the early racers were produced and went out in late '55 (note the ‘55 racer Christmas ad below) or very early '56. I wonder how many '55 worlds actually went out as I have not come across any (not confirmed, but trying to verify a date on a ladies 1955 World). As noted above, I do however have quite a few 1955 racers (regular & deluxe) archived (some below). There are some years that have more than one price list come out (different times of the year) and we may just be missing that piece of information to add this all up).

The very first releases of the racer had the swoopy schwinn decal that you found on the middleweights and later travelers ('56) (this decal appeared on both the early racer and deluxe racer (images below)). I have yet to come across the comprehensive catalog (dealer) that shows the early decal (because of the assumed transition in '55 (between catalogs) it may not have been captured in this way. 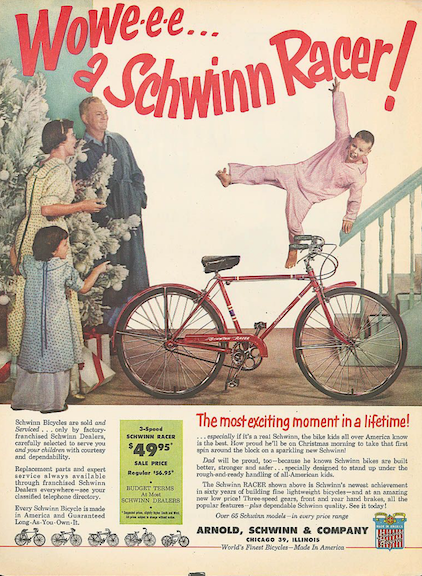 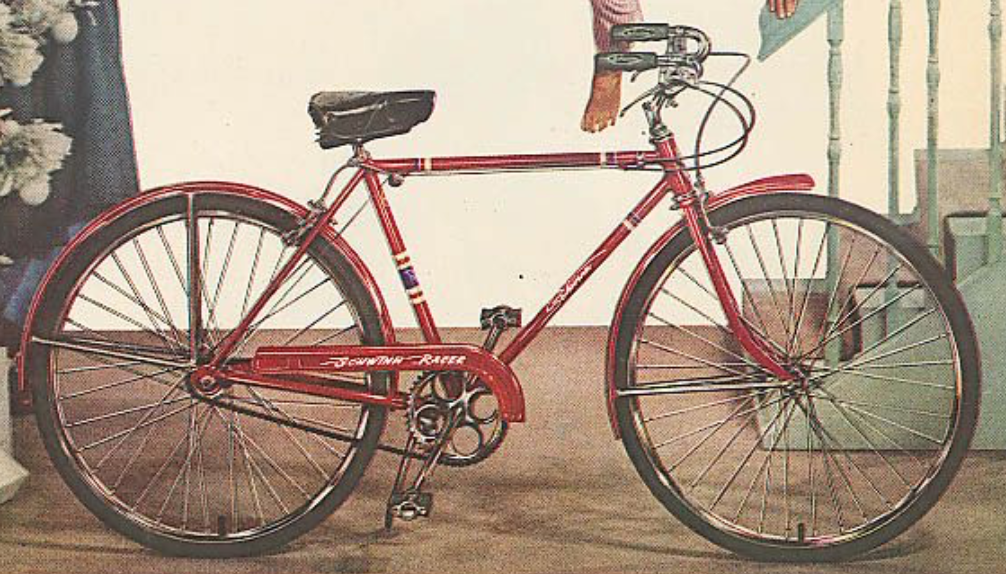 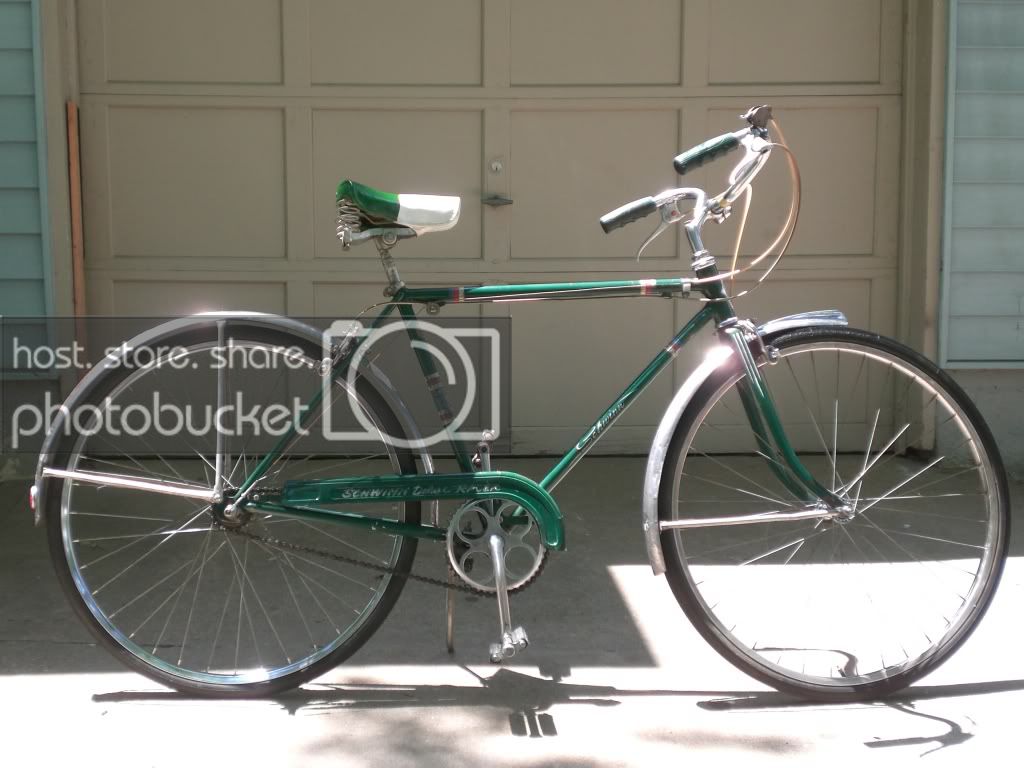 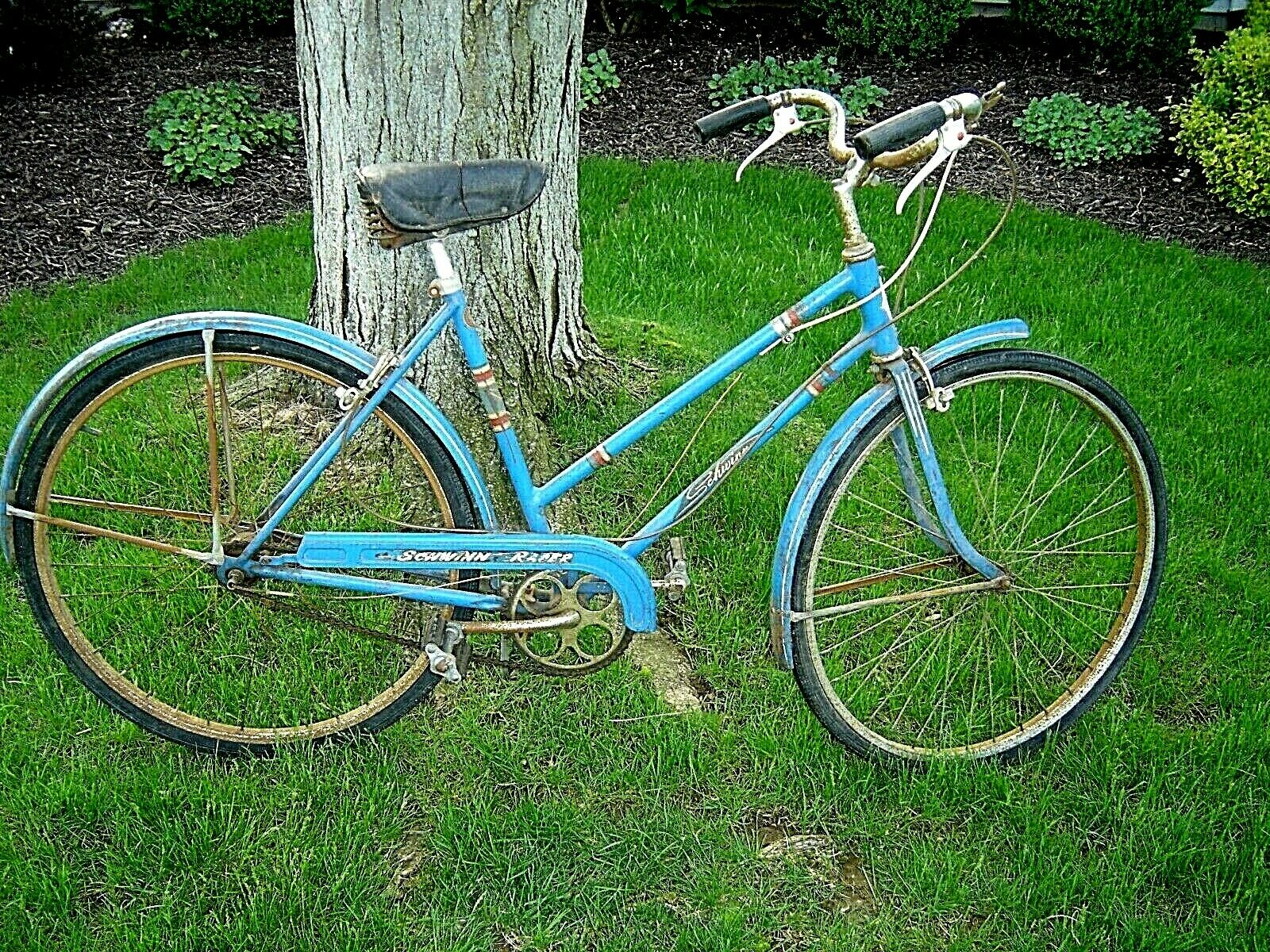 Thanks Chuck, I had no idea there was a '55 Racer, especially since it was not in the '56 catalog, I figured it was not introduced until some time in '56. Also neat to see those decals on '55 production Racers. Didn't know that either.

It doesn't matter much to me what specific color the '56 Racer was. I just figured since all lightweight bikes in the '56 catalog are listed as "Opal" colors, those are the colors they were using that year.

Made progress today. Opened up the 3 speed hub. Here are the parts ready for a soak in solvent. 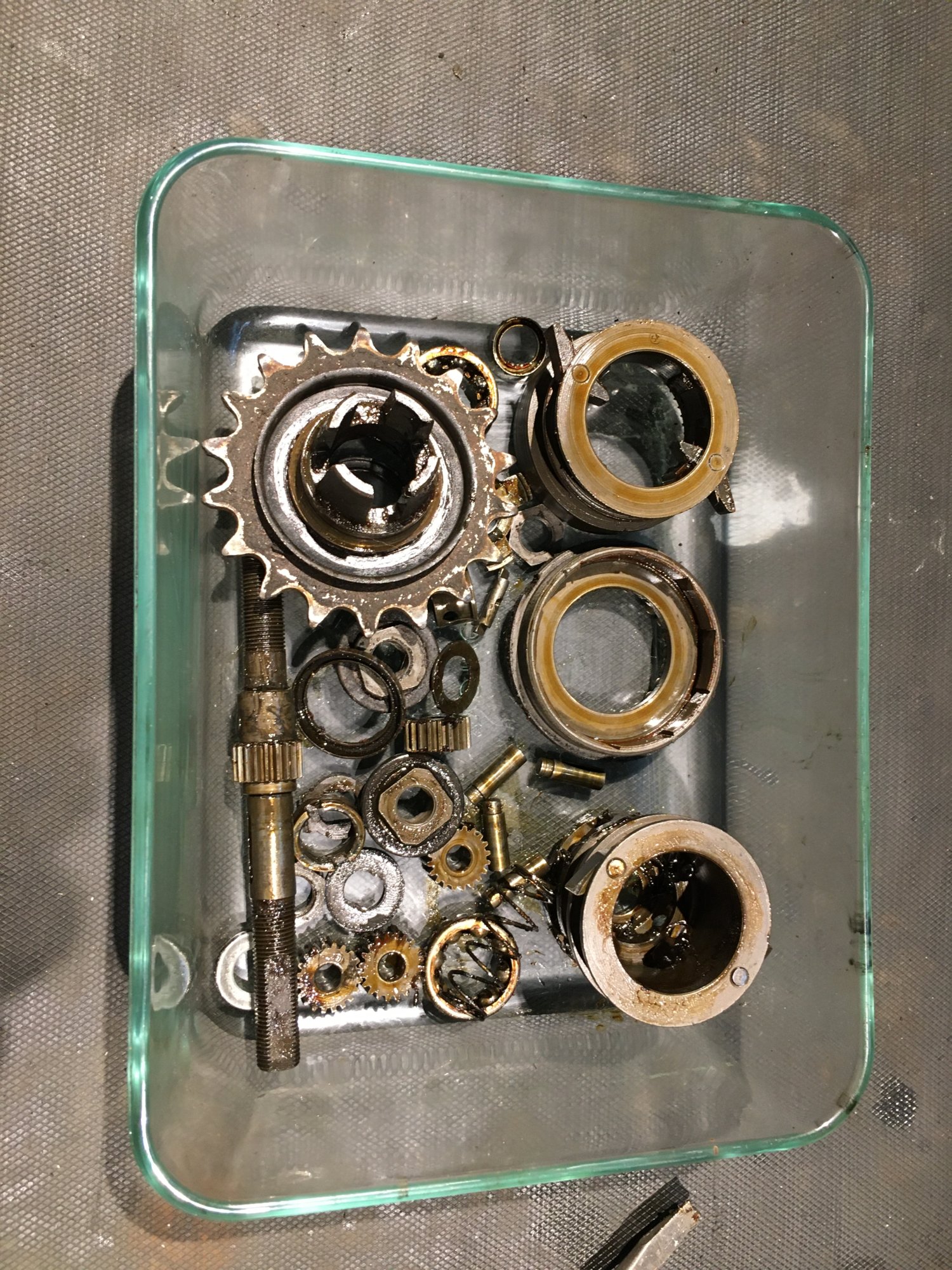 There was grease in there as can be seen, so it has had some maintenance over the years. Also put the rims in an oxalic acid bath. I stand them up and then fill the Pyrex cake pan until the solution is at the top of the lowest spoke nipple. I also took apart the pedals and put the metal parts in there as well for de-rusting. I turn the rims every few hours. Whole process takes about a day plus or minus half a day. 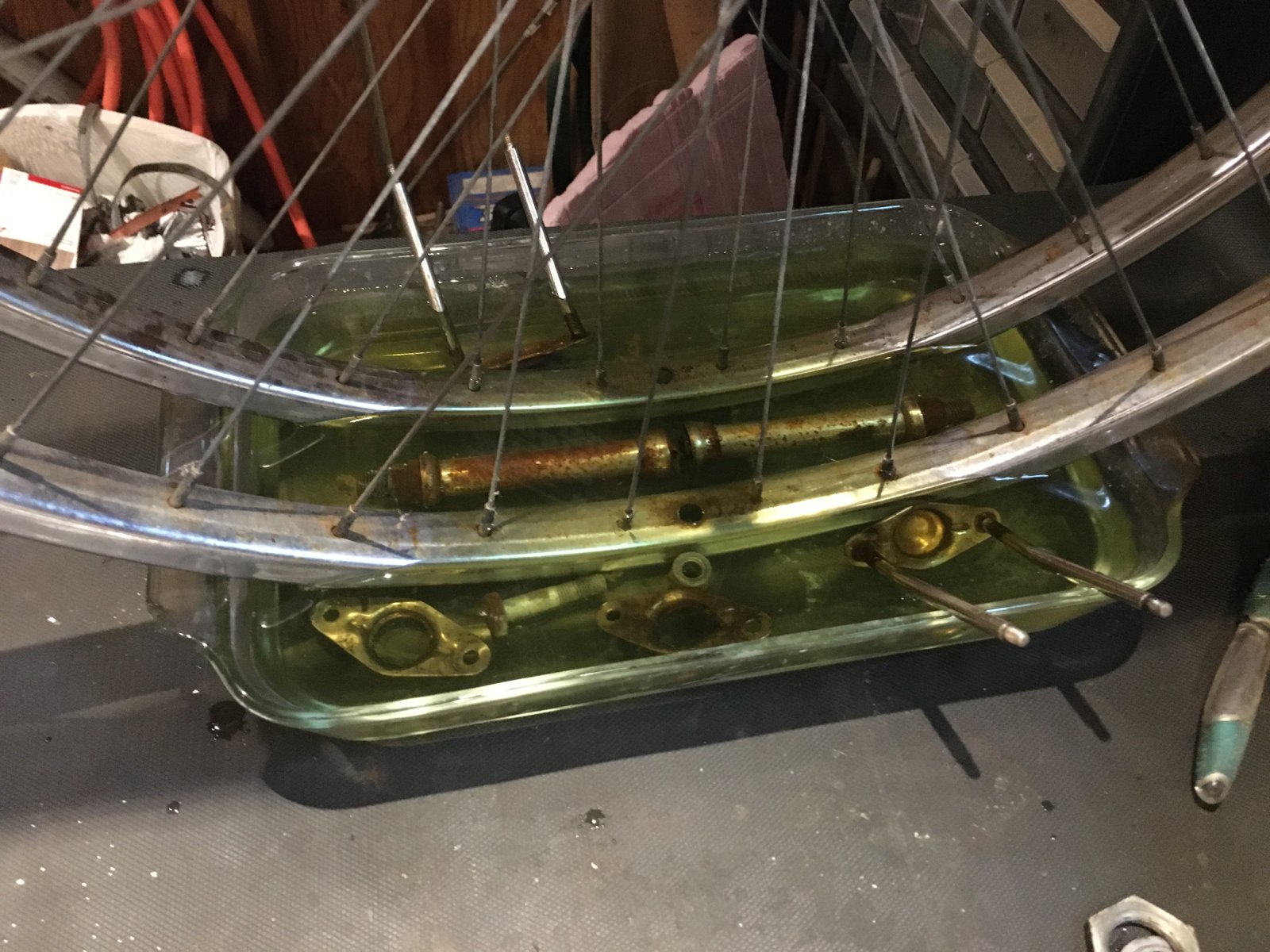 Put everything in this morning, and this afternoon pulled out the pedal parts. Worked pretty well. 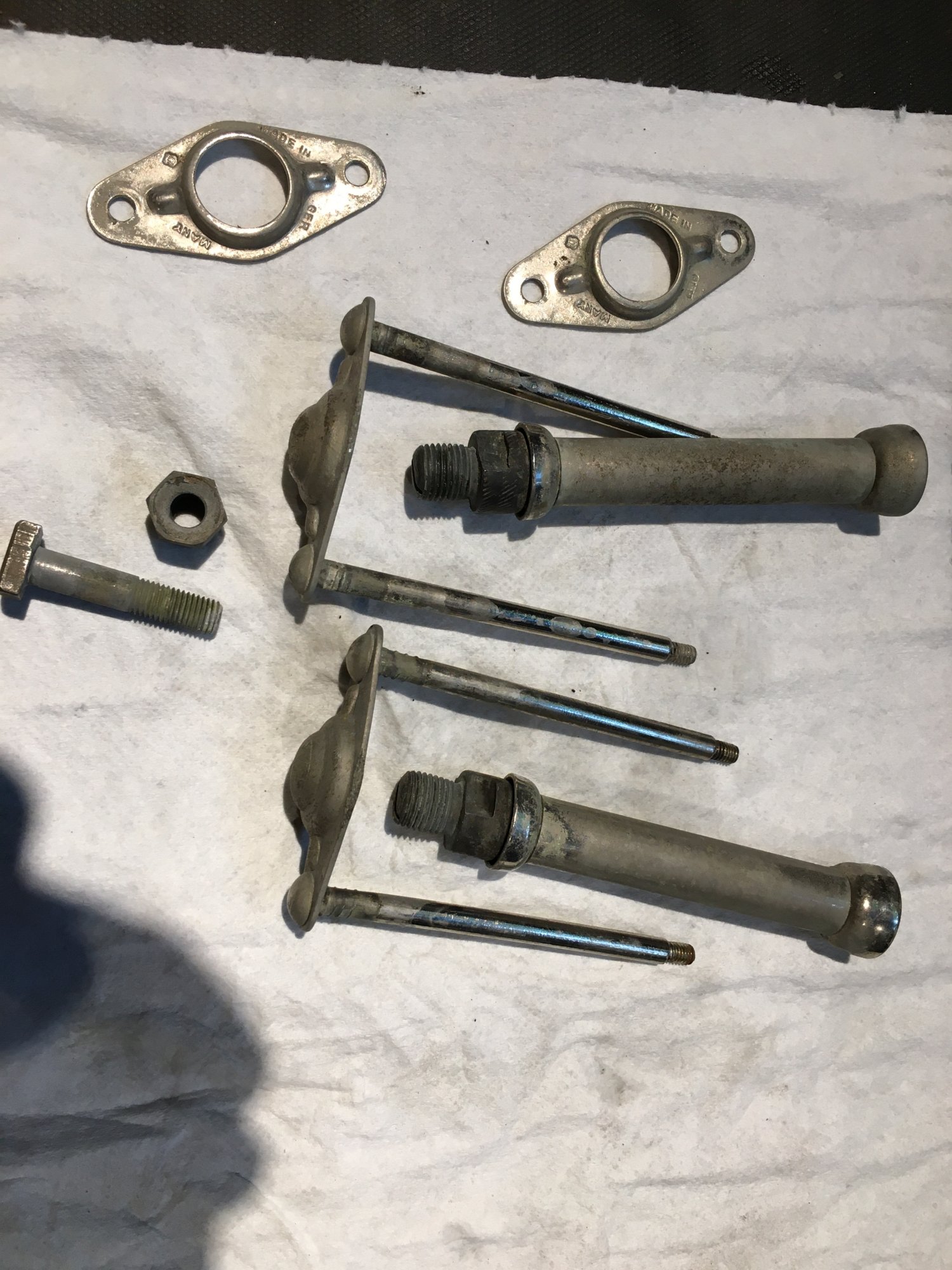 Will dot a little polishing up of those parts with 0000 steel wool and blow out the bearings with compressed air to get all the water out. I then use a thick oil, such as Phil’s for the pedal bearings before assembling.
You must log in or register to reply here.

Tuesday at 5:56 PM
Bike from the Dead