locomotion said:
I would like to know the paint code if you ever get the paint scanned by an auto paint shop or if you have paint cards
I am redoing a TOC bike in green and would very much like to use this green
Click to expand...


Sorry, I don`t have paint cards, but I assume the auto shop near by does so. How soon do you need this ?

One question:
What does "TOC" stand for (sorry, I`m German).
Actually the abreviation "NOS" became kind of common on German Ebay, but with "TOC" I`m not familiar with.

Wikipedia says all kinds of wired stuff like
What the heck ?

dnc1 said:
Are there any makers marks on the saddle, it's beautiful?
Fantastic bicycle!
Paul Watson (in Australia) makes some lovely replicas of American saddles of this era.
Here's a link:

Thanks, and thanks for the advice.
There is actually a small makers stamp underneath the saddle.
I overlooked it at first sight, it only got visible after applying a tiny amount of leather grease to the saddle for conservation. I did not take a picture yet, but will do so tomorrow (need to dismaount it).
B

Beautiful bicycle! Here is a reference to the company mentioning that one of the founders of Harley Davidson was an employee at the factory in North Milwaukee. Very interesting history.

"Old North Milwaukee has been known by several names. It started out as the Schwartzburg hamlet within Granville named after an early German settler, Christian Schwartzburg. This hamlet, with its own post office, was centered on Villard and 35th Street. The development of Schwartzburg was spurred by two railroad lines that intersected just west of the hamlet. In turn, the railroads attracted industry in the latter years of the 19th century, including Wisconsin Bridge & Iron Company and Meiselbach Bicycle Company (with one noted employee—William Harley, co-founder of Harley-Davidson). Gradually Schwarzburg became known as Northern Junction, but only until 1897 when hamlet leaders received a charter from the State of Wisconsin and incorporated as North Milwaukee."

MADISON, WI (August 22, 2018) — When three Milwaukee friends first put together a motorized bicycle, it needed a name. Since the motorbike was originally his idea, William Harley got top billing. They called it a Harley-Davidson.

Before they co-founded what would be the world’s largest motorcycle manufacturer, Harley and Arthur Davidson were next-door neighbors on 38th in Milwaukee, where they spent many childhood hours tinkering with bicycles and engines in the Davidson family basement.

Along with Davidson’s brother Walter, a mechanic, the three combined their industrial knowledge to sell their first motorcycle in 1903. That same year, seeking more engineering know-how, Harley enrolled at the University of Wisconsin.

Here is a thread about this company from a few years ago.

Last week everyone was so helpful with information about my 1891 Victor model C bicycle. Here are some photos of another interesting bike. The head badge is marked--"The Earl Model E, A.D.Meiselbach, Milwaukee, Wis." When I Google this, I find that Meiselbach had a bicycle factory in Milwaukee...

FreedomMachinist said:
Sorry, I don`t have paint cards, but I assume the auto shop near by does so. How soon do you need this ?

One question:
What does "TOC" stand for (sorry, I`m German).
Actually the abreviation "NOS" became kind of common on German Ebay, but with "TOC" I`m not familiar with.

Wikipedia says all kinds of wired stuff like
What the heck ?


TOC means turns of century.
I am in no hurry on the paint color ..... let me know when you can get it from them

Great looking survivor. I will add a bit more information regarding AD Meiselbach late teens/20's.. If the frame badge represents the same gentleman, then he was also responsible for founding/resurecting the Shelby Cycle Frame Builders in 1921, who may have had a working relationship with Consolodated Manufacturing during that time. Shelby CFB then purchased Davis in 1923, then became the Shelby Cycle Company in 1925.
Last edited: Jan 11, 2021

FreedomMachinist said:
Here you go ... hope this will serve better. I tried it wihtout flash too, but the result was worse.
Sooner or later I`ll invest into a real camera- cell phone pics just don`t cut the mustard.

gkeep said:
Beautiful bicycle! Here is a reference to the company mentioning that one of the founders of Harley Davidson was an employee at the factory in North Milwaukee. Very interesting history.

Company and Meiselbach Bicycle Company (with one noted employee—William Harley, co-founder of Harley-Davidson)
Click to expand...

Hello gkeep.
Thank you so much for the reference to Harley-Davidson - indeed a very interesting side note.

Harley was born in Milwaukee, Wisconsin, in 1880 to William Harley Sr., a railway engineer, and Mary Smith from Littleport, Cambridgeshire, England who emigrated to the United States in 1860.[1][2]

After moving to Milwaukee's north side on Burleigh Avenue, Harley first worked at the Meiselbach bicycle factory at the age of 15. In 1901, Harley drew up plans for an engine to be mounted on an ordinary bicycle while working as an apprentice draftsman at the Barth Mfg.Co. Over the next few years, Harley and his childhood friend Arthur Davidson worked on their motor-bicycle with the help of Henry Melk, who owned a machine shop in northside Milwaukee. They later received help from Ole Evinrude, who was then building gas engines of his own design for automotive use on Milwaukee's Lake Street.[3]

Harley received a degree in mechanical engineering from the University of Wisconsin–Madison in 1907.[4][5] He co-founded Harley-Davidson with Arthur Davidson in 1903 and served as chief engineer and treasurer until his death in 1943.[4][6] While in college he worked at a Madison architect's office and as a waiter for the Kappa Sigma fraternity house.

In 1910 he married Anna Jachthuber, with whom he had two sons and a daughter.

If my model was build between 1895 and 1901, there is a good chance that the founder of Harely Davidson had his hands on it- who knows, maybe he even had his first ideas for that bicycle-motor, ending up in this huge and sucessfull company, just while assembling the bike in my living room ;- LOL
We will never know, but it is nice to let imagination flow

That green is sililar to 1976 MG Midget green. 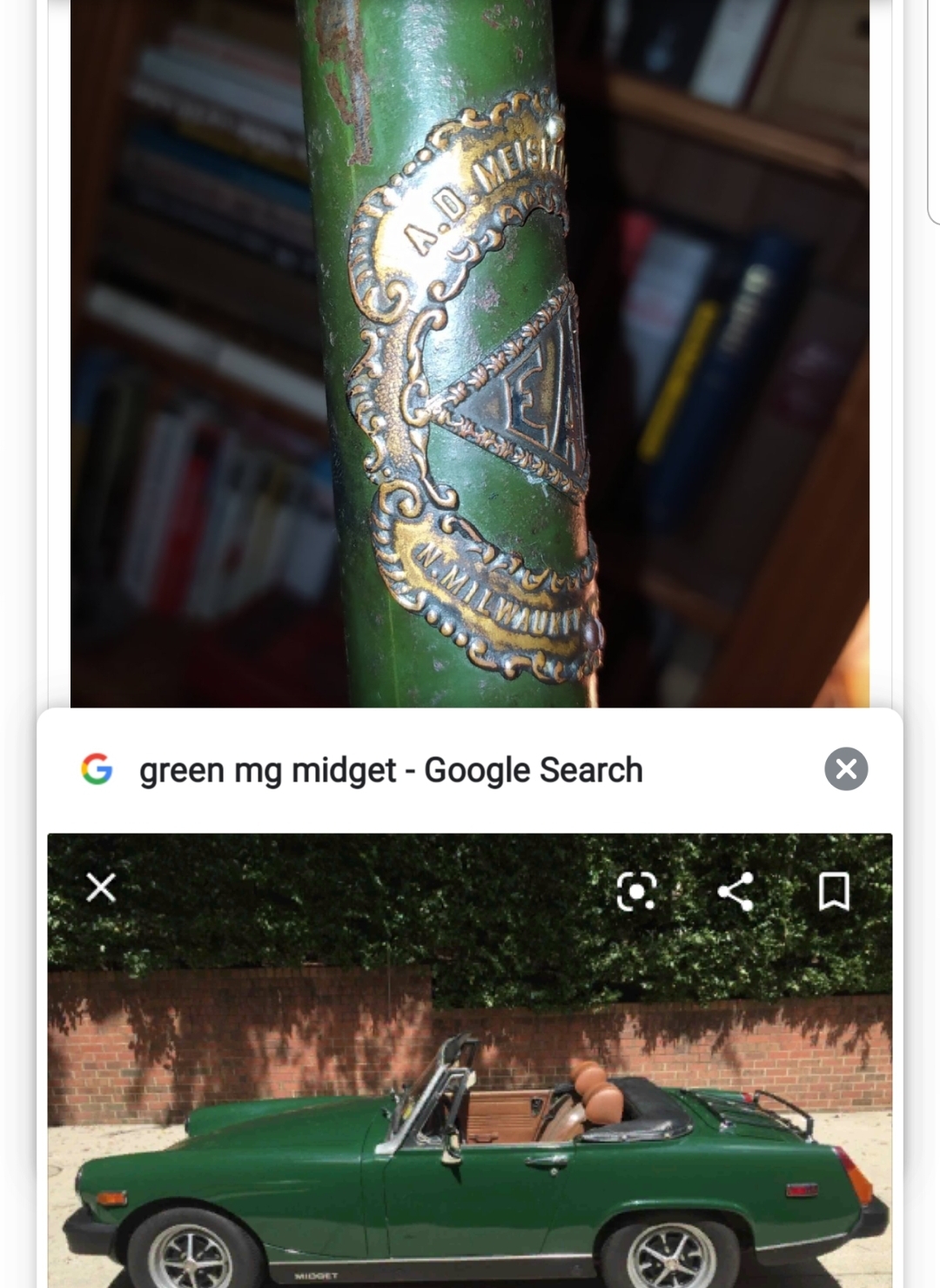 Yes, that green seems to match quite well.
What came to my mind was the "Jaguar Green", or "British Racing Green", although this type is not clearly definded, variies from dark to light green.

I think I will need to compare it against the RAL6000 numbers - one of them should match, maybe "Emeral Green" or "May Green"- I will need to check with a print out - my monitor may lie 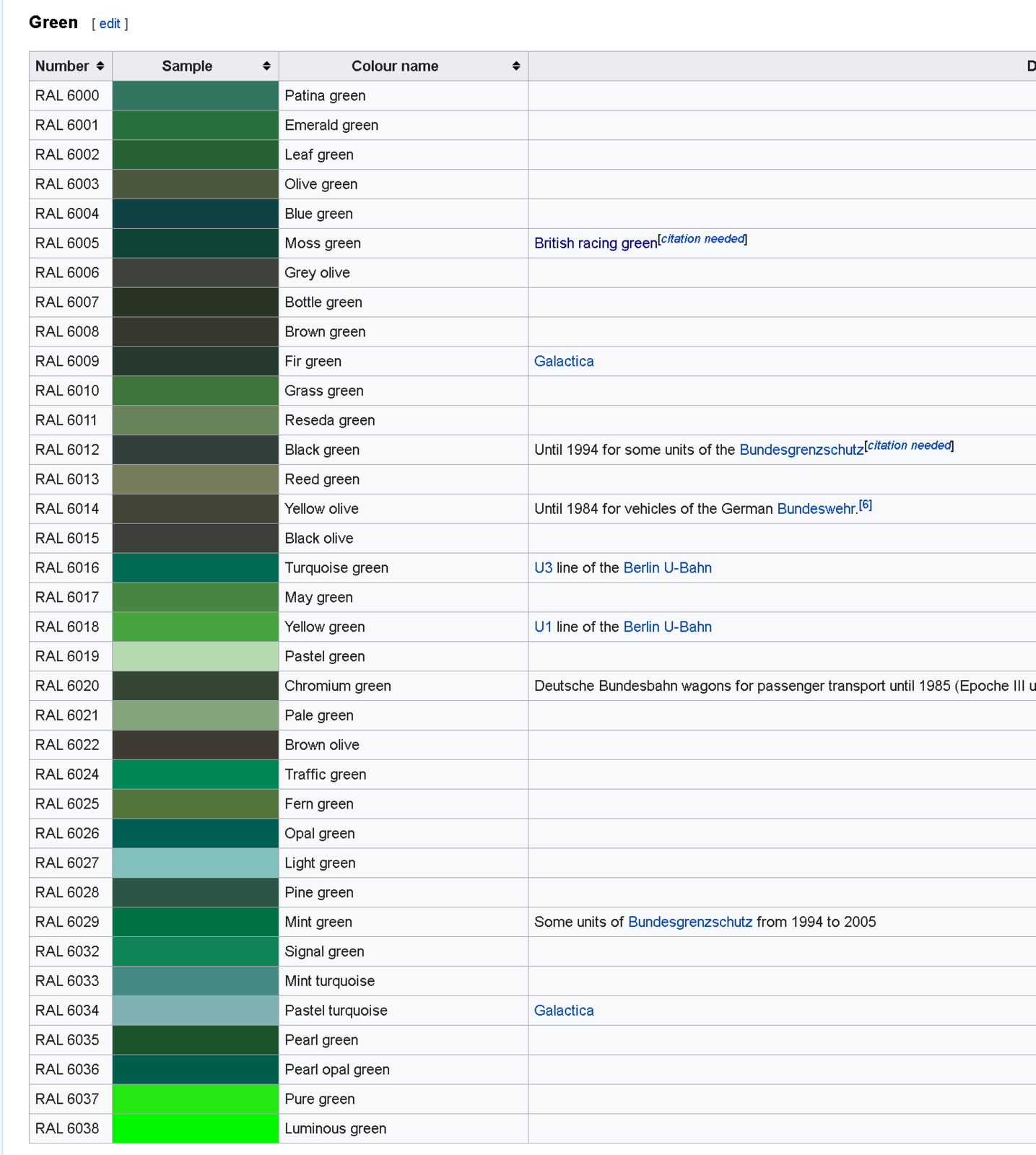