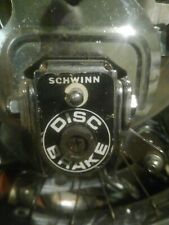 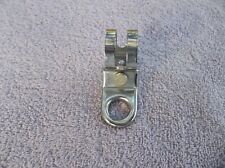 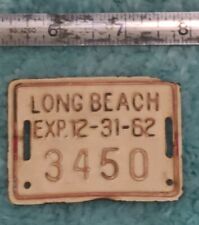 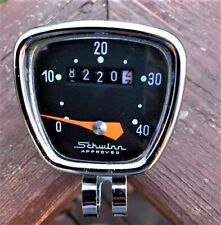 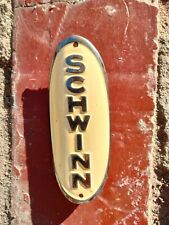 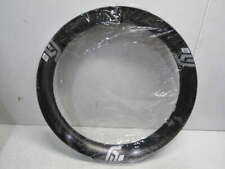 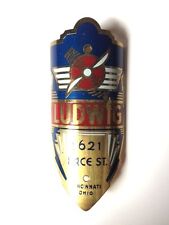 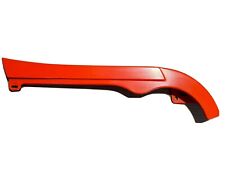 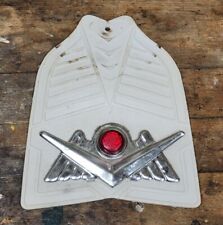 The wheel/tire outer diameter would be larger than 26x2.125 (559) balloons because as Rivnut said, the OD would have been the same with stock s7 26x1-3/4 tires. My forks are non-caliper and measure 3" wide, center to center of the blades, measured at the fork crown. Of course it gets wider at the bottom to fit a standard Schwinn front hub. There is 1/2" clearance between the tire and the underside of the fork with no fender bolt.

It looks like they used at least three different forks over the years on middleweights. The blue 1965 forks on the American now are wider than most others, maybe their not lightweight forks? But they're not 3" wide. They are wider than any of my other 60's and 70's middleweights here. The only middleweight fork I have here with the caliper hole is the red fork pictured with the mtb wheel, its about 1/8" narrower than the forks on my all three Typhoons and my Fleet.

In the same lot from which the American frame came from I got two buckets of forks, some lightweight, some middleweight.
The lightweight forks are obvious, they're longer and much narrower. Later forks are also obvious because of the 'safety' dropouts or big square ends on each fork blade.
I have two forks here that were marked 24", those are obviously shorter but will mount a 26" S7 wheel with a smaller tire but only just barely. There would be no way to confuse the two when building a bike.
In the middleweight lot of forks, Ive got two very light blue forks, one violet fork, three blue forks counting the one on the bike now, one later green fork, and one yellow fork. The yellow, light blue, and green fork have the newer ends. The violet fork has a matching '68 Typhoon frame but the kickstand tube is broken off, the yellow fork has a frame but the fender tab is missing for the rear fender, and the two light blue forks are from ladies frames. There was another black Typhoon frame that was basically missing only its wheels, that had the right seat stay broke free of the seat tube. I traded that to a guy who said he was going to reweld it and restore it. It was in rough shape. I got a clean newer Speedster and two large cases of brand new Schwinn inner tubes for it.

Anyhow, with the blue forks on the bike now, a pair of those newer brick tread 26x2x1 3/4" tires the tread just misses the fender nut but with weight and flex it does appear to make contact. I had slapped the wheels off my Fleet on it before I cleaned it all up to make sure it rode okay, and over bumps I'd get the occasional sound of tread rubbing the bolt head. Without the fender bolt it would have been fine. On the Fleet, the tires clear by about 3/8".
There may also be some differences in those new brick tires, those on the Fleet are a few years old, they say made in Vietnam on the side and are branded DRC. I think I bought them at a flea market brand new while on vacation in FL about 12 years ago.
The same seller there had tires branded DRC, Omega, and Oxford, all made in Vietnam, and super cheap. The brick treads were $15/pr, the Oxford S7 tires were $10/pr. I bought a dozen tires in all, if I had known I'd need so many 12 years later I'd likely have bought a lot more. The guy had a 'booth' at a local fleamarket and he sold used bikes and parts.
The DRC tires are larger than the newer Duro branded tires by about 1/4". I had a lot of trouble getting them to pop up on the bead of the rim, so I left them out in the sun inflated to about 80 psi for a day to get them to fit properly, I think that may have also expanded them some. I now run them at the max 45 psi. They are larger than many 2.125 width 559 tires.

I wish I had another pair of the the brick tread tires for my 69 Typhoon, the Cheng Shin tires on it are small for their size.
They ride okay but I have to over inflate them to protect the rims under my weight.

Here's a '72 Typhoon I've had for a lot of years, I just pulled it from storage after about 25 or so years at my other house.
Its got a set of Cheng Shin tires on it as well. There's not a ton of room on this later model for bigger tires, these have less than 3/8" on both sides of the tires and about an 3/4" of space in the back, and slightly less in the front. The fender, like on my 69, bolts from the bottom with a single bolt up front. These forks are much narrower than the blue forks on the American.
These forks are only slightly wider than those on the same year Speedster I've got, which is a lightweight model.

There's a definite difference in the rear triangle of the middle weight frames even between my 64 Fleet, and my 69/72 Typhoons. And the Fleet has differences when compare to the American. There's a lot more tire room on the 64 and 58 frames than on the newer Typhoon frames I've got.

Its hard to tell in just pictures but it also looks like some forks have less of a curve to them. These blue forks look to have more of a sweeping curve at the end than most I see here. They're perfectly aligned and they don't look bent, but they're definitely different than say the forks on the black Speedster above. Even the red forks I posted with the mtb wheel earlier have more of a curve. The curve seems to occur lower on the black than do most middleweight forks I see here.

I don't doubt these are the wrong forks but I'd like to figure out what they came from. So far I've not seen any that match.
B

dirtman said:
The DRC tires are larger than the newer Duro branded tires by about 1/4". I had a lot of trouble getting them to pop up on the bead of the rim, so I left them out in the sun inflated to about 80 psi for a day to get them to fit properly, I think that may have also expanded them some. I now run them at the max 45 psi. They are larger than many 2.125 width 559 tires.
Click to expand...


What? What are you calling brick tread and which of these are s7 and which are 559? Are these DRC tires S7 tires?

bloo said:
What? What are you calling brick tread and which of these are s7 and which are 559? Are these DRC tires S7 tires?

The small brick tread, which are similar the original Westwind tires are S7 tires, they're branded DRC. I bought them in 2008 while on vacation. The seller looked to be a regular there and had all sorts of used bikes for sale and some older Schwinn's. He sold tires, pedals, saddles, and other bike parts too. Sort of a bicycle junk yard looking place at the fleamarket there.
The S7 version said DRC, I also bought some road bike tires with the DRC brand, which were super wide 27 x 1 3/8" size, and several pair of the cheaper Oxford branded tires with a non-brick tread. I also seem to remember having to dig through the box of tires he had to find matched pairs, some were marked DRC, others had different brand names on them, but you could see they were the same tire side by side. I think some of the other clones in box were branded Omega or something similar.
I remember him getting frustrated when I said I only wanted 'matched' pairs. He at first had handed me two tires, both with different branding on them, but out of the same box that he had just opened. That may have been why I didn't buy more, there may not have been another two exact matches in the box and he either didn't have another box or refused to open another box till the first one was empty.
The DRC small bricks look nearly the same as the new tires being sold as Wanda, Duro, and CST, but with a few less rows of bricks on the sides. (The tread don't wrap as far around and the tire appears to have more sidewall area. He had those in both S7 and 559 diameter in 1.75 size and 2.125 sizes. I didn't buy any of the brick pattern tires in anything but 26x2x1 3/4", at the time I didn't have a need for that size and was only after a set of tires for a bike I had just bought there and one I had back at home then.

I've never run across that brand before or since. I do wish I had bought more back then, but I'm not sure how many he had. They were cheap, but not cheap enough to make me buy everyone he had. I was still buying tires then at the bike shop down the road for $8 and $10 each. I also never figured we'd be looking at $50 to $80 for a set of bicycle tires either.
(I've got a box of innertubes here that came from a store that closed up in the early 80's, the price tag on them is $1.59 each and they're made in the USA). I bought four tubes in the summer of 2015 at one bike shop here for $4 each, and four Michelin 700c-28 tires for $11.99 each. That shop is gone with all the rest after the owner retired and closed up shop.

I've also run into what I'd call 'studded knobby' tires over the years on S7 rims, they came in a bunch of sizes from Carlisle and a few other brands. They looked similar to the 'tractor grip tires that came on some Heavy Duti models.

Back in the late 60's and 70's a few local bike shops who didn't sell Schwinn used to sell a Westwind knockoff, it looked identical to the Schwinn tire but where one had Schwinn Westwind lettering, the knockoff had a bunch of swirls like they had buffed off the Schwinn Westwind logo. They were half the price of the tires from Schwinn.

I remember one shop that sold those who would only sell you three tires, he wouldn't sell one or two, you had to buy in lots of three. So if you needed two, you had to buy three tires. His reasoning was that most would buy 6 rather than end up with one odd tire. But what he wouldn't tell you is that if you bought 6 they were half price.
You must log in or register to reply here.

Any Info on these very old 28” wheels?

Wednesday at 2:41 AM
Hastings